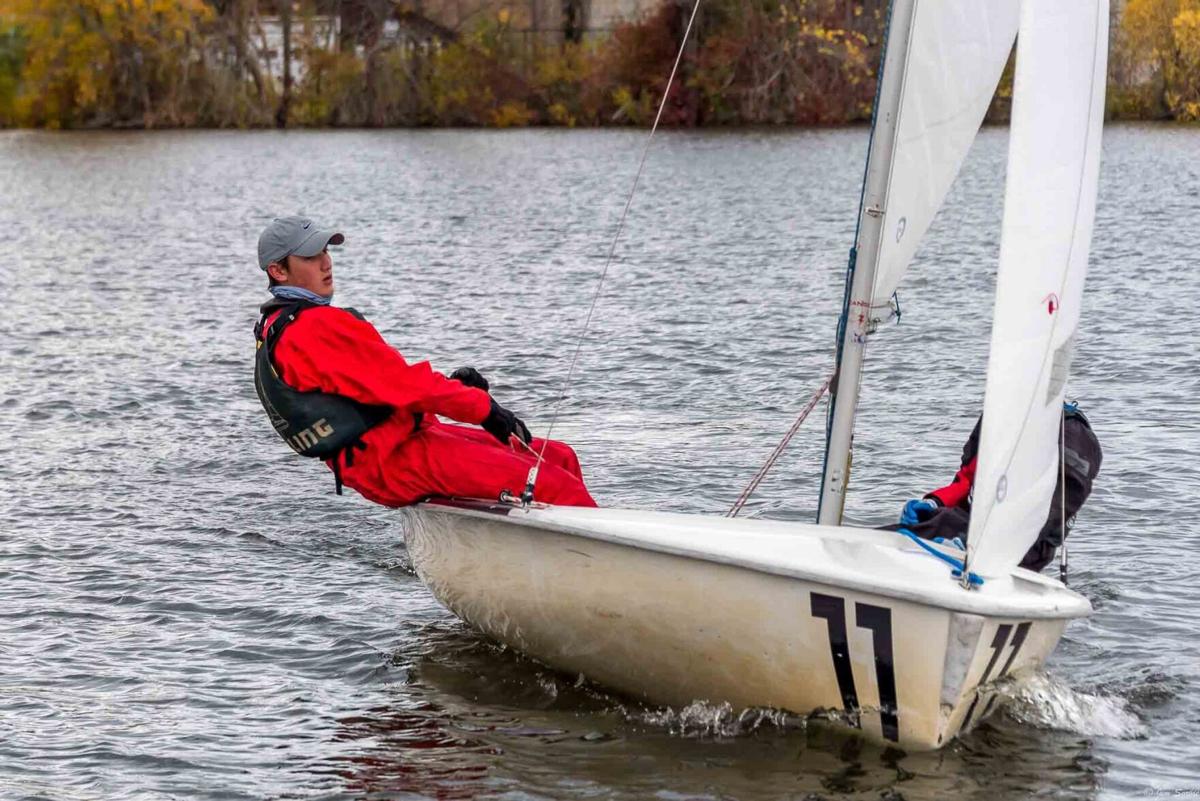 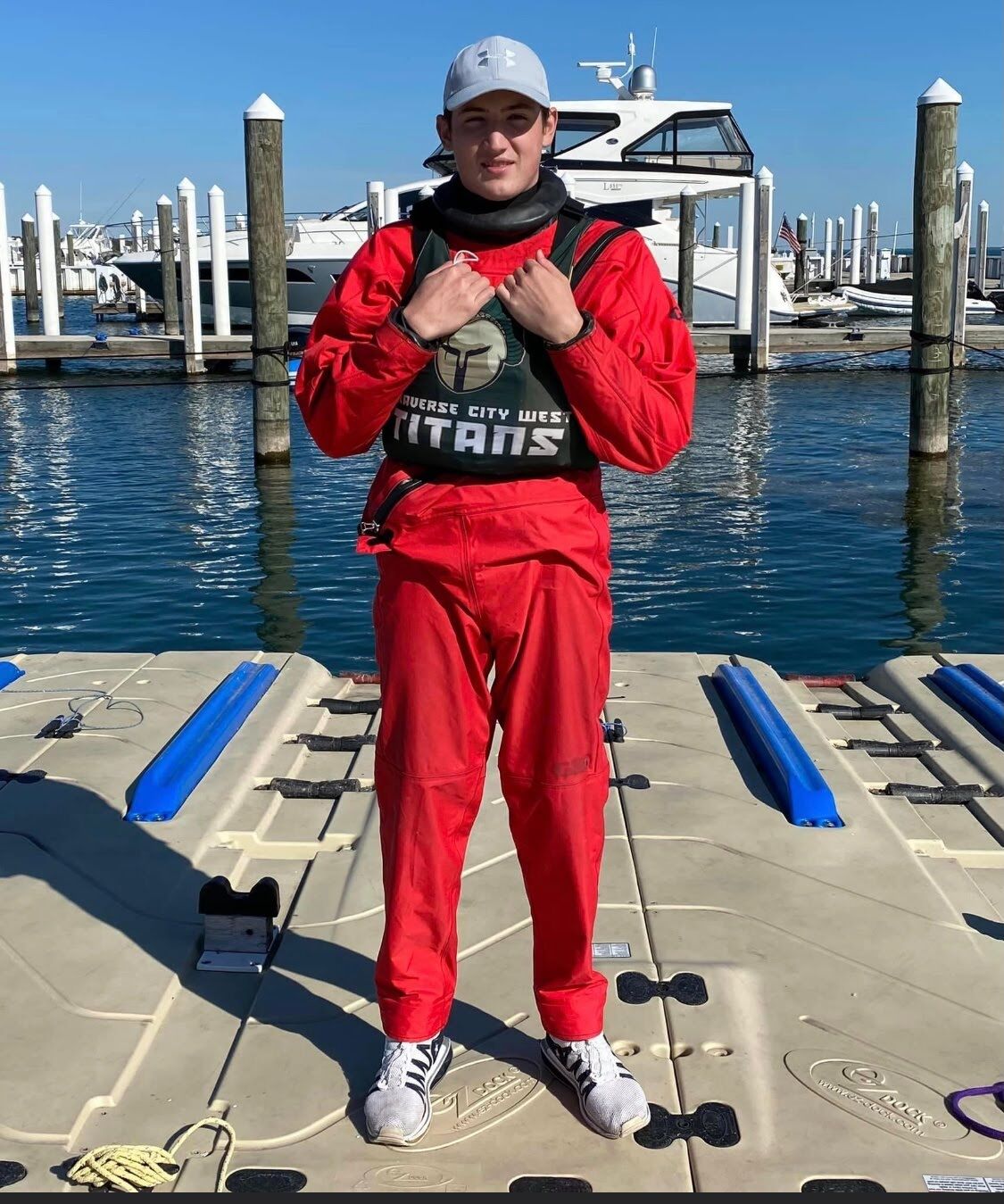 Andrew Godmer in his sailing uniform. 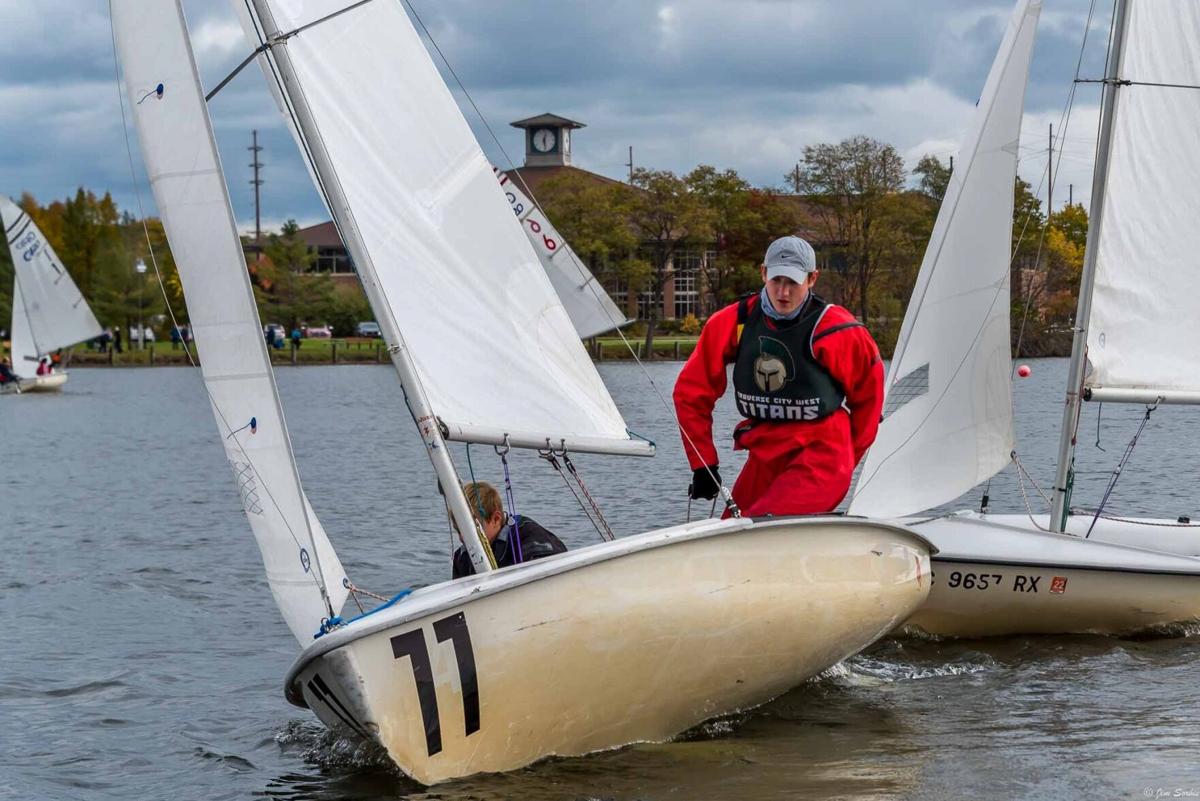 Andrew Godmer, set to be a junior at Traverse City West, sails. 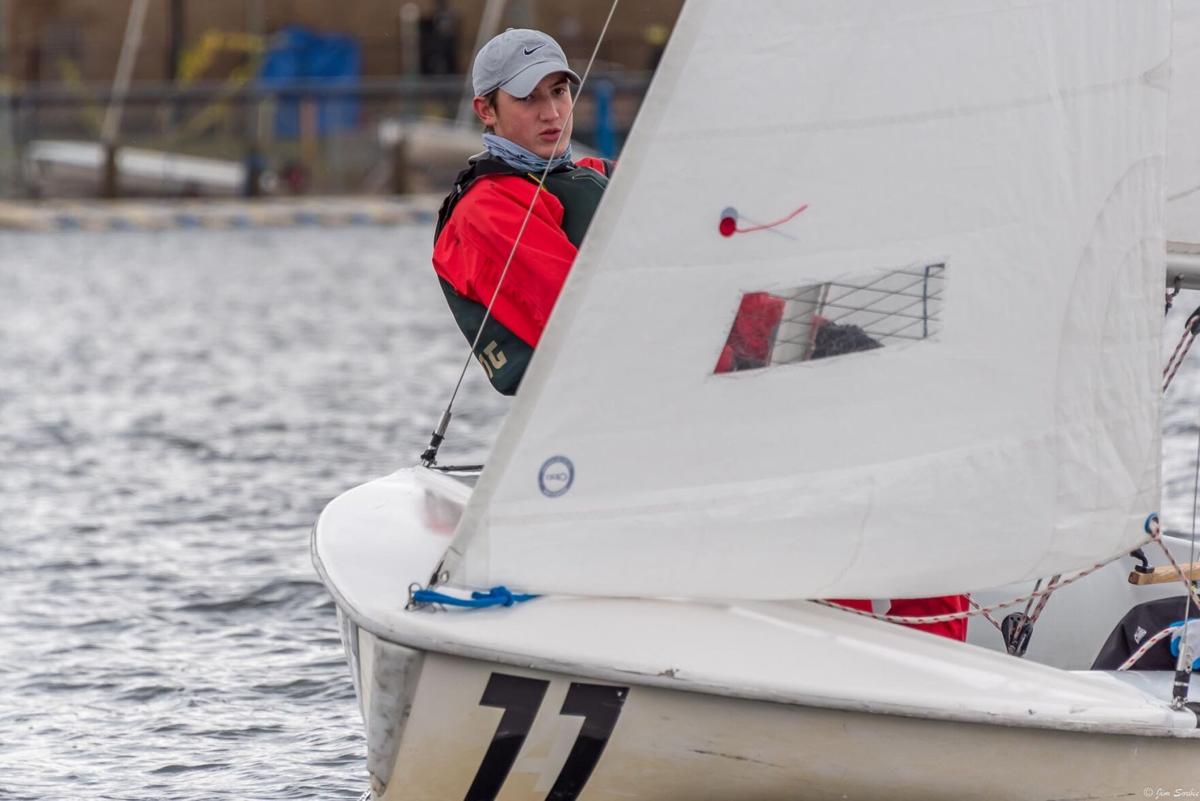 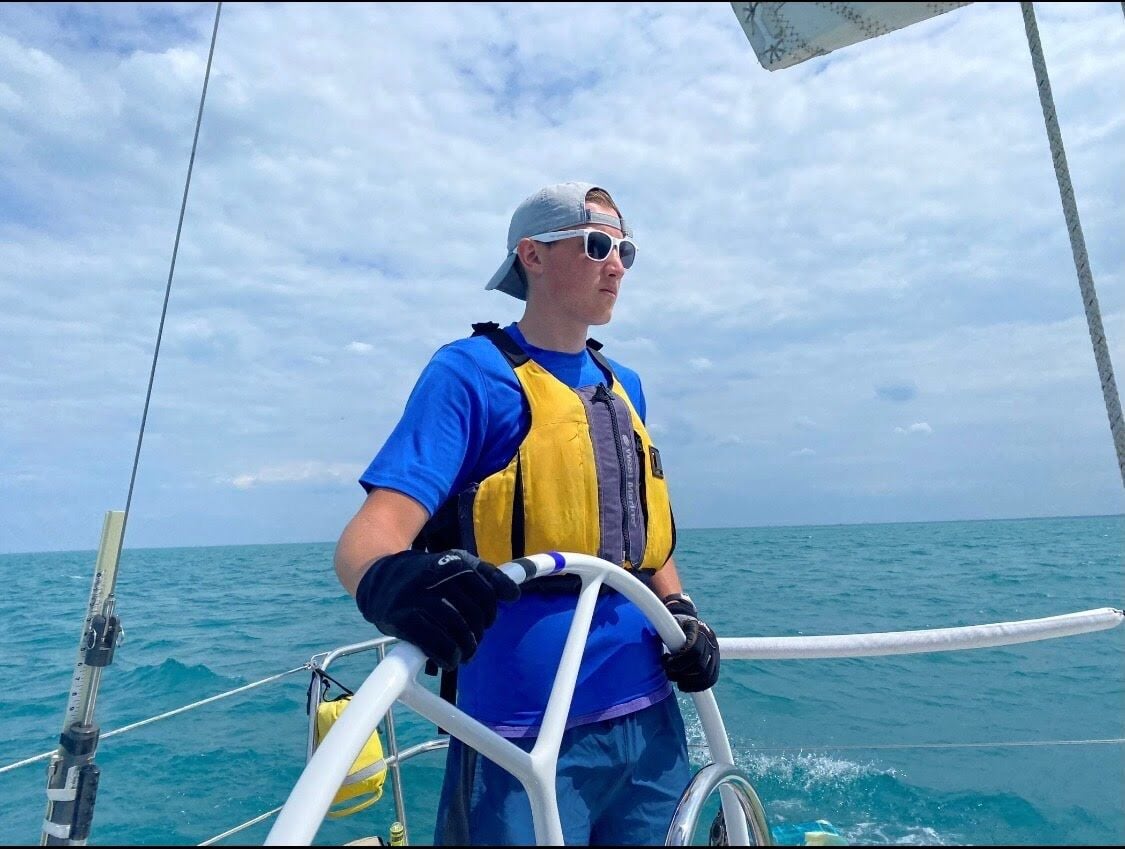 Andrew Godmer in his sailing uniform.

Andrew Godmer, set to be a junior at Traverse City West, sails.

TRAVERSE CITY — A Traverse City teenager is joining five others on a mission to sail Lake Michigan from Chicago to Mackinac Island.

Andrew Godmer, 16, who’ll be a senior next year at TC West Senior High School, is set to compete in the Chicago Yacht Club’s Race to Mackinac sailboat race which departs Saturday, July 17. Known simply as the “Mac,” the annual 333-mile race (289 nautical miles) forces sailors to sail throughout the night before docking at Michigan’s Mackinac Island.

Godmer was invited to sail with the team through a friend of his stepdad. The team of six will set sail on a 35-foot J/105 on July 18 with full sleeping cabin and a way to make food. They expect to arrive on the island the following Monday morning, or into Tuesday depending on weather. For Godmer, he said it’s the largest boat he’s sailed on.

“It’s definitely going to be a challenge, both physically and mentally. But it’s something that they’ve been preparing me plenty for. Every week I got down there, I’m learning more about what it’s going to look like. We’ve had different weather just about every time, so I feel like I’m pretty prepared for whatever weather we may have.”

Godmer spent his weekdays coaching children at Traverse Area Community Sailing out on the Boardman Lake and weekends at Burnham Harbor in downtown Chicago training for the race with the team.

He believes he may be one of the youngest to participate in the race for the J/105 class. Other children have sailed on boats run by their parents.

“A lot of it is just learning the parts of the boat and how they work,” Godmer said. “Most people have a certain area that they specialize in. For the short distance races, that’s usually what they’ll stick to. For a long distance race like the Chicago to Mac, you have to be able to do all parts of the boat. So that means driving, applying ourselves and being able to respond to any situation.”

Crewmates need to be ready for all sorts of weather when they don’t have the leisure to return home for clothing. Godmer said he and other mates will have heavy rain jackets and coats in the event of a downpour or chilly night temperatures.

The six sailors will have three-hour rotations with the jobs it takes to sail the boat.

If they’re not doing one of those jobs, they’ll be resting in the cab. There’s a stove aboard and food packed.

The five other sailors have raced the Mac at least six times.

“I’ve been told that they’ve had nine people before, which was just too much,” Godmer said. “You very quickly — especially at night — figure out who the sailors are and who the people just enjoying the ride are.”

Godmer is among many sailors to succeed in the Traverse Area Community Sailing high school clubs.

Noah Robitshek is the captain of the club with Traverse City Central students. Godmer captains West’s sailing club. Gabe Mayday heads the St. Francis team. There are about 30 members in TACS for its high school teams.

Robitshek competed in, and won, the state championship in laser standard rig fleet on Lake St. Clair in Detroit this past October. Laser races are divisions where it’s just one person on the boat.

He’ll be a freshman at Boston University in the fall and hopes to be a part of its club varsity sailing team.

Robitshek recalled his experience racing the Mac in “butal” headwinds.

“The whole race was sailed upwind, there was no sailing downwind,” Robitshek said. “As we turned up to the Straits of Mackinac, the wind shifted.”

Godmer played lacrosse in his freshman and sophomore year for TC United — a co-op with players from TC Central and TC West — but decided to focus on sailing this past school year.

“Honestly I hated it the first day,” Mayday said. “I told him I would not go back again. ... and I wouldn’t go the second day and she (my mom) is like ‘Nope, you’re going back again.’ I’m very glad she did because that’s probably my favorite and the greatest thing I do right now.”

“Probably one of my favorite things is it’s not like we have three individual teams that practice together — we’re kind of one big team and eventually we compete against each other,” Mayday said. “We just have one big family rather than we are three individual groups.”

TACS athletes sail through both the fall and spring. Sailors practice on the weekdays and race in regattas on the weekends. Most fall racing is raced in Club 420s, which are meant for two people, a skipper and the crew. They are fleet style — one racer vs. everyone.

Spring regattas still have two-person races, but they are more team-centric with multiple boats on the water at once.

For example, the race may have three boats racing against another three boats.

Mayday said it’s been cool to help Godmer prepare for the Mac in any way. He can’t wait for Godmer to return so he can hear his stories.

“It’s cool that he’s doing it and we’re here to help him and support him. Maybe slightly jealous on the side but definitely always out of love but more ‘Wish we could be there with him,’” Mayday said.