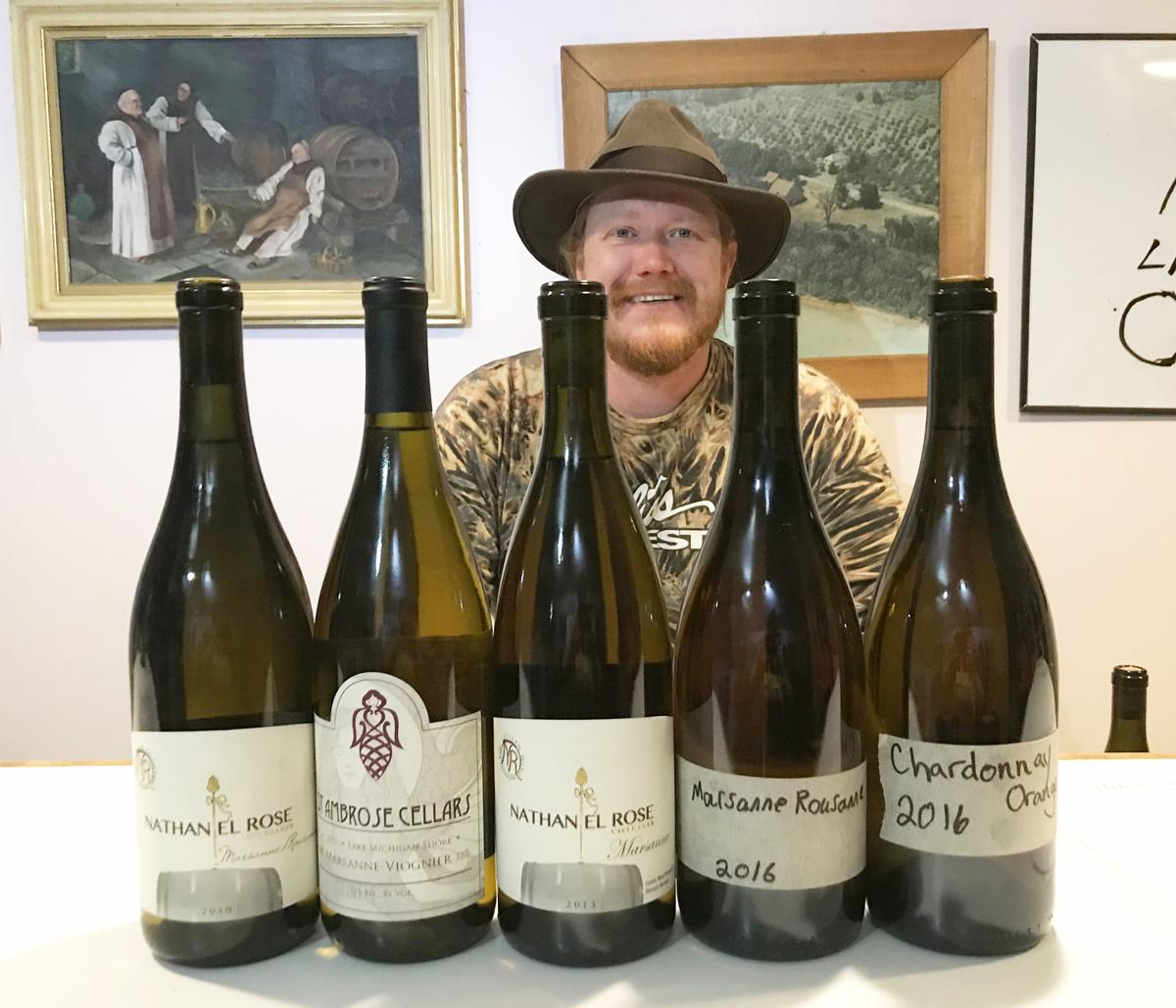 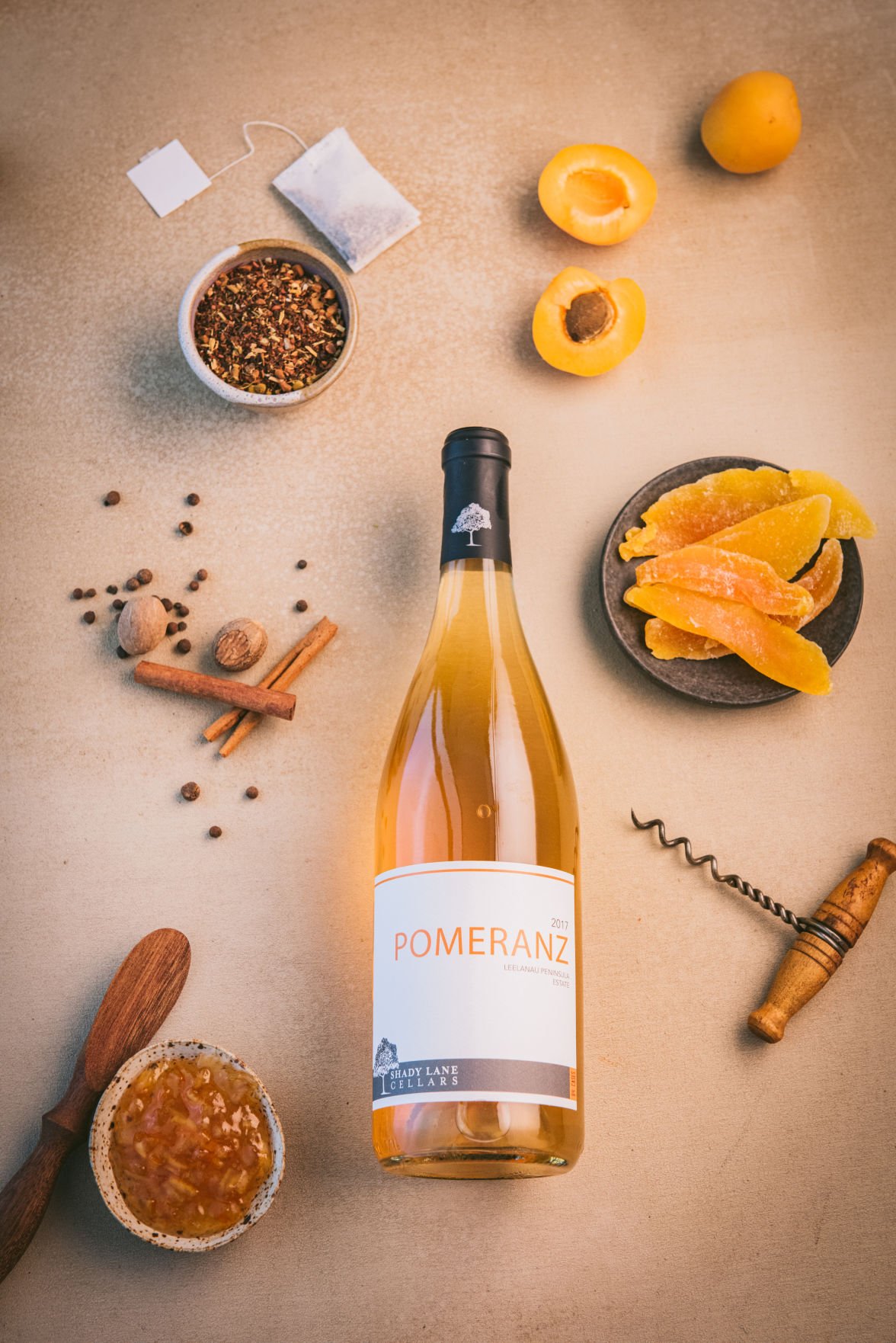 The Pomeranz from Shady Lane Cellars. 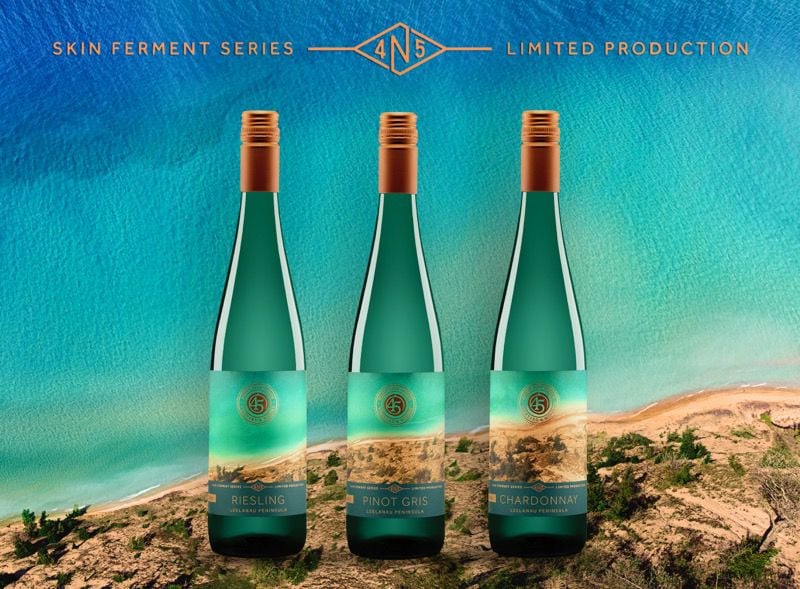 45 North Vineyard and Winery has a skin fermented series of wines. 45 North's Riesling, Pinot Gris and Chardonnay feature a panoramic picture of Lake Michigan sand dunes on the labels. 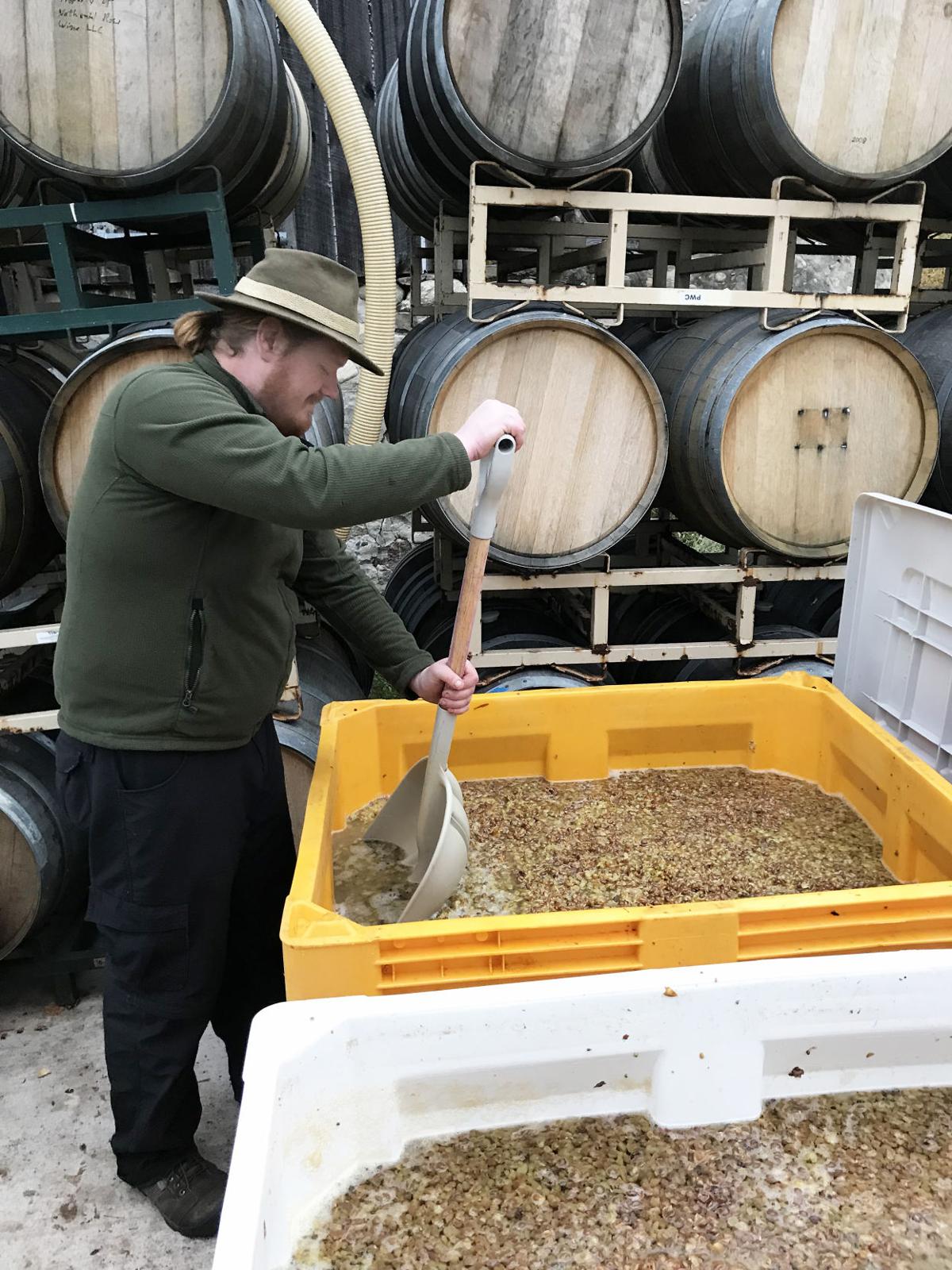 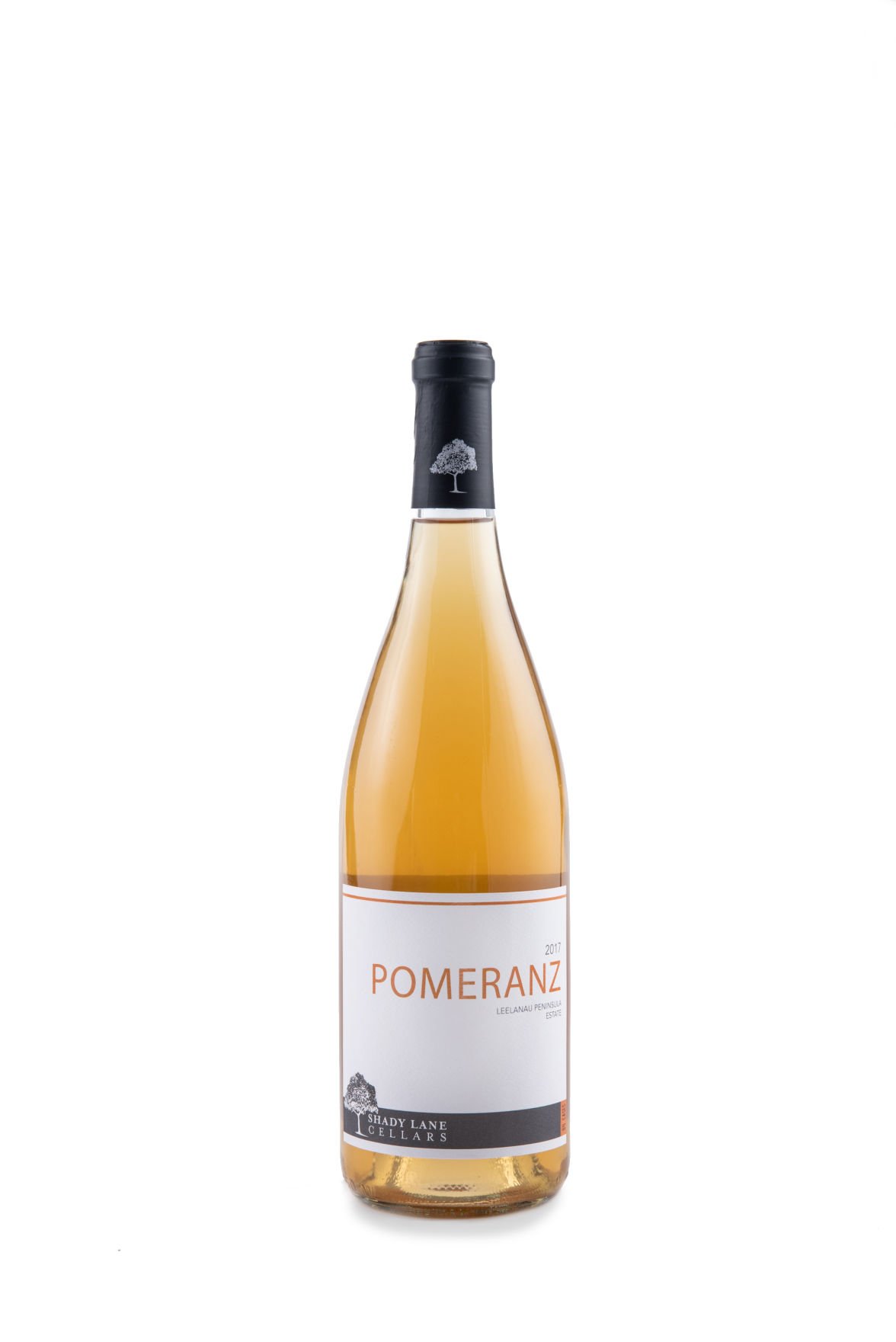 A bottle of Pomeranz from Shady Lane Cellars in Suttons Bay. 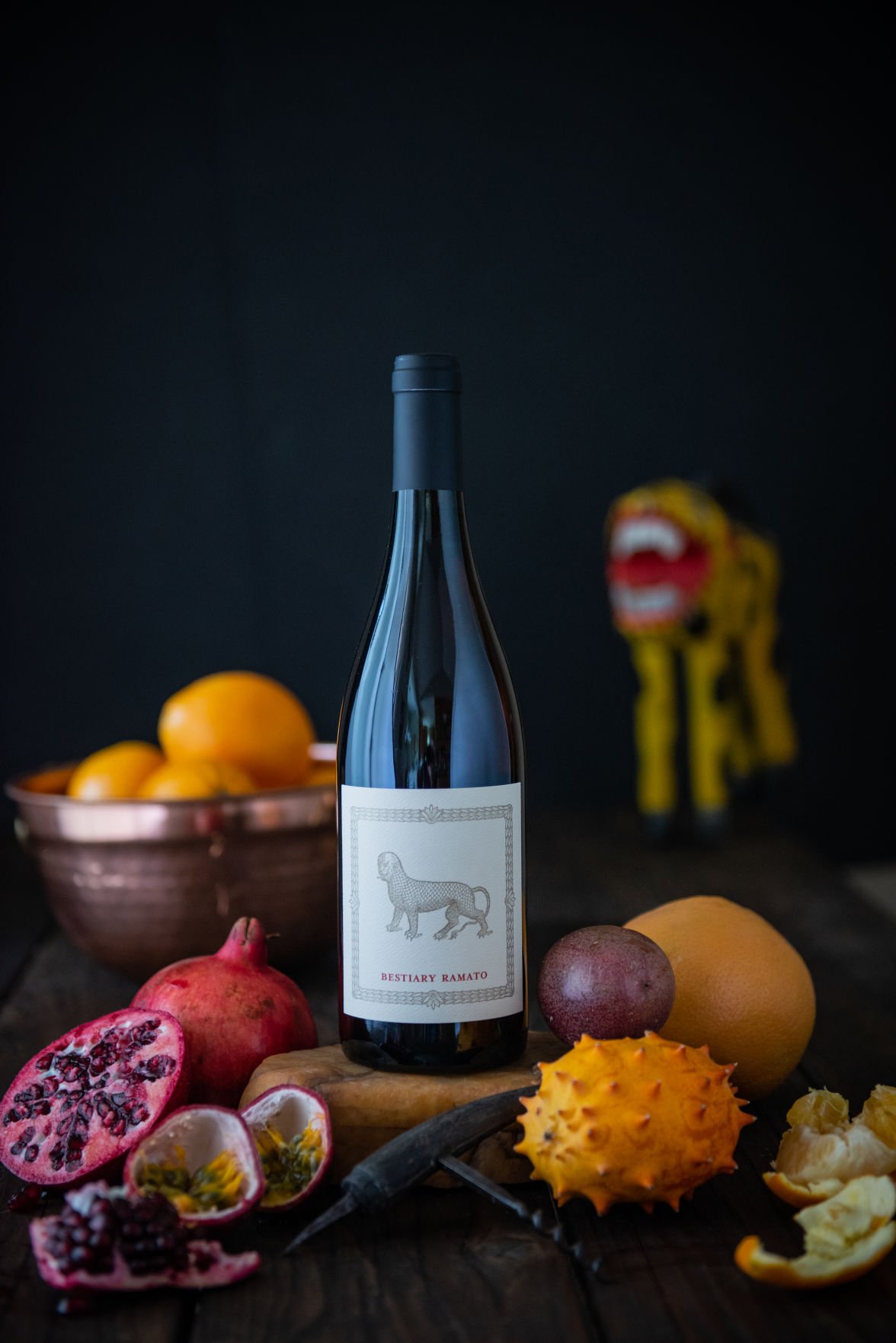 Mari Vineyards has a Bestiary Ramato for an orange wine. Ramato is Italian for ‘coppery.’

The Pomeranz from Shady Lane Cellars.

45 North Vineyard and Winery has a skin fermented series of wines. 45 North's Riesling, Pinot Gris and Chardonnay feature a panoramic picture of Lake Michigan sand dunes on the labels.

A bottle of Pomeranz from Shady Lane Cellars in Suttons Bay.

Mari Vineyards has a Bestiary Ramato for an orange wine. Ramato is Italian for ‘coppery.’

TRAVERSE CITY — The process of making wine is thousands of years old, so there isn’t anything “new” any more.

But an old technique of creating a grape-based fermented drink is enjoying a bit of a comeback in northern Michigan, making “orange” wine the new white.

“It’s a very old, ancient way of wine making,” said Kasey Wierzba, head winemaker at Shady Lane Cellars in Suttons Bay. “It’s kind of how wine was made 6,000 years ago.”

Wierzba credited Decanter magazine with coining the term orange wine in the 1990s. According to the Wine Folly website, orange wine is made from white grapes that are mashed and fermented with the skins and seeds attached.

Fermenting white grapes with the skins on makes the color different. Some refer to it as amber or copper, but the orange description stuck.

Nathaniel Rose, the namesake behind Nathaniel Rose Wine, said he first turned out an orange wine in 2010. Rose, who used to work out of other facilities, now has a tasting room north of Suttons Bay on M-22.

“I’m probably the first one in Michigan to do an orange wine — at least intentionally,” Rose joked.

Rose crushed his sixth batch of white grapes recently. In 2016, Rose said he “made more of that than any other product.”

In Lake Leelanau, 45 North Vineyard and Winery turned out a Skin Ferment series with a Riesling, a Pinot Gris and a Chardonnay. Winemaker Jay Briggs said doing something completely different made the process an enjoyable one.

“It’s an old technique that was done up to the pre-Industrial era, the idea of letting white wine ferment on the skins,” O’Keefe said.

Taking a break from the ordinary drew winemakers to go orange.

Rose said he used 80 percent Marsanne and 20 percent Rousanne grapes to blend the orange wine he began fermenting in 2010. When Rose attended the Michigan Wine Showcase in the spring of 2013, he presented it to Master Sommelier Madeline Triffon in a black crystal glass and asked her if it was red or white wine.

After Rose told her how he made it, Triffon responded, ‘Oh, you made an orange wine,’” Rose recalled.

Rose said the wine was a big hit when it was fully released in 2013.

“It had such amazing popularity,” he said. “Everybody thought it was the coolest, neatest, weirdest thing they had ever seen.”

Shady Lane Cellars eased into orange wine in 2016 on the suggestion of vineyard manager Andy Fles. Wierzba said she used Riesling grapes because it’s Shady Lane’s flagship variety. Pomerante is the fifth Riesling wine from Shady Lane even though it can’t compare to the other four.

“It’s definitely something different,” Wierzba said. “It hearkens back to ancient wine making, and for us it expresses the Riesling in a different way that we’ve never done before. It’s like a 180 degree turn.”

Briggs said he jumped into producing orange wine after a visit to Finger Lakes, New York. Briggs said the winemaker he met served as a consultant.

Even though producing orange wine is an old technique, O’Keefe said making orange wine more than 10 years ago would have been viewed as “the third rail of wine making.”

Wierzba went on to say orange wine isn’t for everyone and can be polarizing. She said tea drinkers and those who like sour often find it more pleasing to the palate.

“People really dig this wine or they don’t,” she said.

“People are a lot more accepting of bitter,” he said. “We owe it to the beer guys, the kale eaters and what not.”

The method and volume of orange wine produced in the area varies widely, which can produce very different expressions.

A good year for Marsanne grapes in 2013 helped Rose to produce 12 barrels of orange wine. Rose experimented with other Pinot varieties this year, like Auxerrois.

Rose ferments the grapes until dry in open-top bins, a process that can take from three weeks to two months. He also punches down the grapes a dozen times a day, presses them to a barrel to age for 18-34 months, and then bottles the wine unfiltered to age 1-2 years and “sometimes 3.”

Wierzba said she lets the grapes macerate for a couple of days before adding an old German yeast, assmanhausen. It then ferments for 21 days, is punched down, pressed off and tanked for eight months on top of the lees (sediment) before being bottled unfiltered to age another eight months.

“We want to express the grape in this natural form of fermentation,” Wierzba said.

The skin ferment series at 45 North varies by the variety. Briggs said the Chardonnay and Pinot Gris are aged in the barrel for nine months while the Riesling is aged outside the barrel. Then it spends two to three months aging in the bottle.

Mari Vineyards orange wine ferments in the tank for three or four weeks before it’s pressed. It ages in oak barrels for a year and in bottles for at least six months.

“We release it when the wine is ready,” O’Keefe said. “You can’t rush it to the market if it’s not ready. It improves the next years after that.”

Since the techniques and aging process differs, the end result does as well.

“We get a lot of dry flavors from the wine,” Wierzba said. “It’s dried apricot, dried mango, raw honey, white tea and notes of hazelnut and earthiness. They are all the aromatics and flavors expressed through them.”

“The Chardonnay seems to be the most popular in the tasting room,” said Briggs, who raved about how remarkable orange wine does with food. “It’s akin to a Chardonnay palate-wise. And you can tell it’s a Chardonnay.

“The Pinot Gris is more like a Pinot Noir aromatic-wise. It has a lot of the fruity characteristics that the Pinot Noirs have up here.”

Rose said orange wine is everything you would expect from a white grape and a red wine process.

“It’s fruity, nutty and buttery, but with the tannins, structure and body of a red wine,” Rose said.

“People are a lot more accepting of bitter. We owe it to the beer guys, the kale eaters and what not.” Mari Vineyards Winemaker Sean O’Keefe

"People are a lot more accepting of bitter. We owe it to the beer guys, the kale eaters and what not."

At the table: It’s the quiet moments

Thanksgiving is this self-proclaimed foodie’s dream meal. Not only are there many dishes served, there is opportunity: for the traditional and…