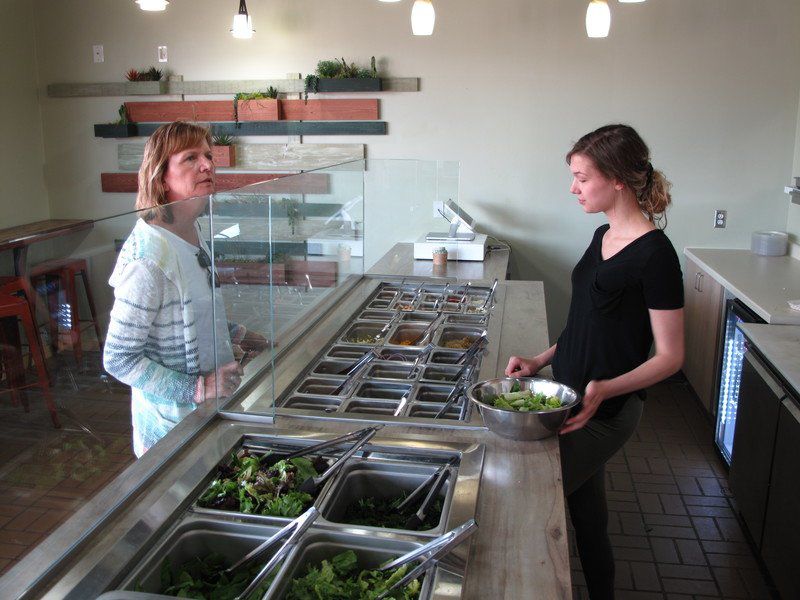 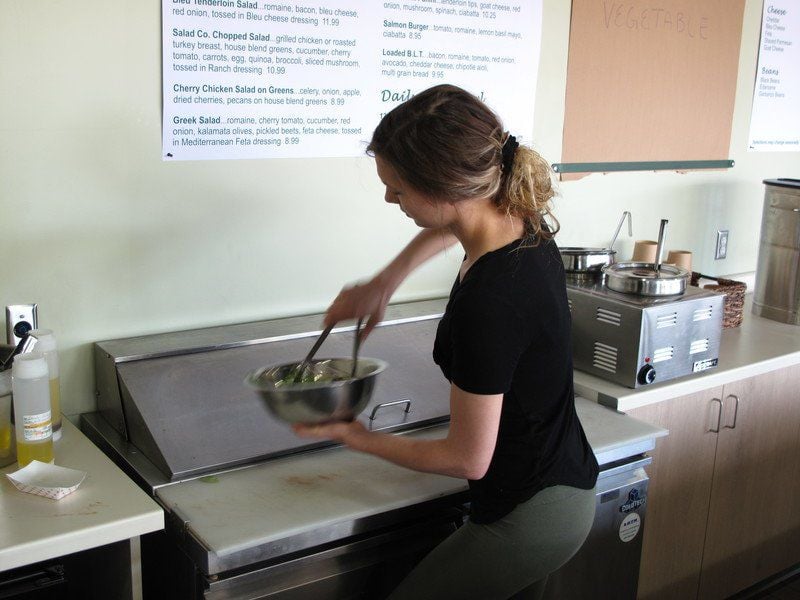 Jackie Chenette, who co-owner John Sheill called the 'main salad maker,' tosses a salad for a customer at the Grand Traverse Salad Company on Friday afternoon.

Jackie Chenette, who co-owner John Sheill called the 'main salad maker,' tosses a salad for a customer at the Grand Traverse Salad Company on Friday afternoon.

TRAVERSE CITY — It isn’t too difficult to improve the health factor when your business follows a pair of doughnut shops and a gas station.

Fresh and local are the focus for the Grand Traverse Salad Company, which opened its doors for the first time on June 1 at the corner of West South Airport and Cass roads.

“We’re definitely going in a healthy direction,” co-owner John Sheill said. “No doubt about that.”

Debbie Caperton, the owner of SOS Learning Lab, a short distance away on Veterans Drive, agreed.

“It’s much better than a doughnut shop,” she said.

Caperton on Friday afternoon was enjoying a salad for the second time in the six days the restaurant had been open, this time with daughter and employee Carlee, a self-professed picky eater.

“We needed this so badly in the town,” Debbie Caperton said. “And it’s not downtown; you can easily come in and grab something.”

Jan Sheill, who began her food service career working at a Clock Restaurant in Mt. Clemens at the age of 14, said she has wanted to open a place like the Grand Traverse Salad Company for a few years. Jan Sheill worked for nearly three years with Mike and Sheila Connors at Apache Trout Grill and when that sold, she decided the time was right.

“I wanted something that was different ... fresh,” she said. “My biggest thing was when we moved up here I couldn’t get just a salad when you wanted without a full sit-down service.

“This has been rolling around in my brain for a few years. It was time. It was time to branch out on our own.”

The menu at the Grand Traverse Salad Company features about eight sandwiches and one or two daily soups. But salads are the focus. The Sheills said they soon will work with Full Moon Microgreens and offer as many locally-grown ingredients as possible.

The business features six to eight signature salads. But the staff of about eight employees can create one to the customer’s specifications from several varieties of lettuce, two dozen other items and up to 11 dressings.

Jackie Chenette, who John Sheill called the main salad maker at the eatery, said there is no limited to the number of items a customer can choose, but once the bowl is full, nothing else can be added.

“We definitely kicked it up a notch,” Jan Sheill said. “We handle it all on our side. We build your own bowl.”

The Grand Traverse Salad Company is open from 11 a.m. to 7 p.m. Monday through Friday and 11 a.m. to 6 p.m. on Saturday. Jan Sheill said the hours, like the menu, will be tweaked before a grand opening in a couple of weeks.

John Sheill did much of the interior remodeling and new woodwork at the restaurant. The couple, who have been married 31 years, plans to add a patio with outside seating under the canopy that used to cover the gas pumps.

Dean Phelps, a Los Angeles native living in Traverse City, said he typically would dine at a similar place in California a couple of times a week. So he was happy to see the business open its doors.

“There’s nothing like this in this city that I’ve seen,” Phelps said. “I’ve only been here for three months, but if I would start a business, this would be it: Fresh ingredients, fresh soups and maybe some artisan bread.”