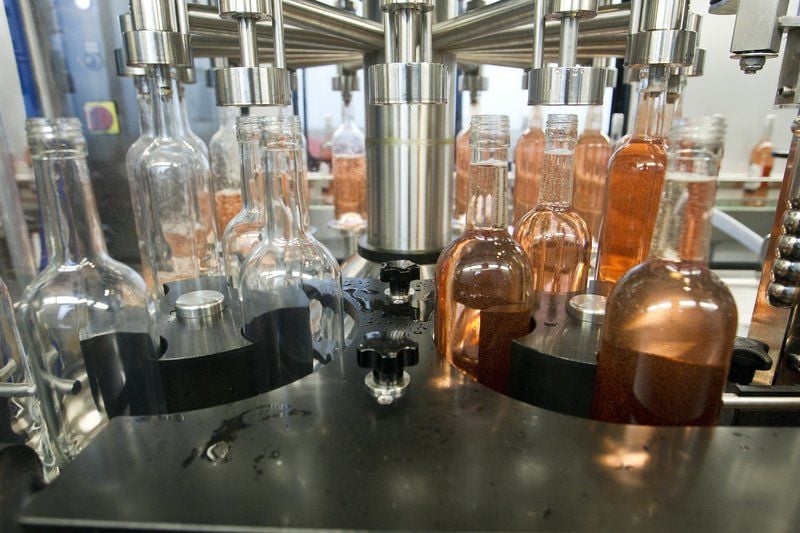 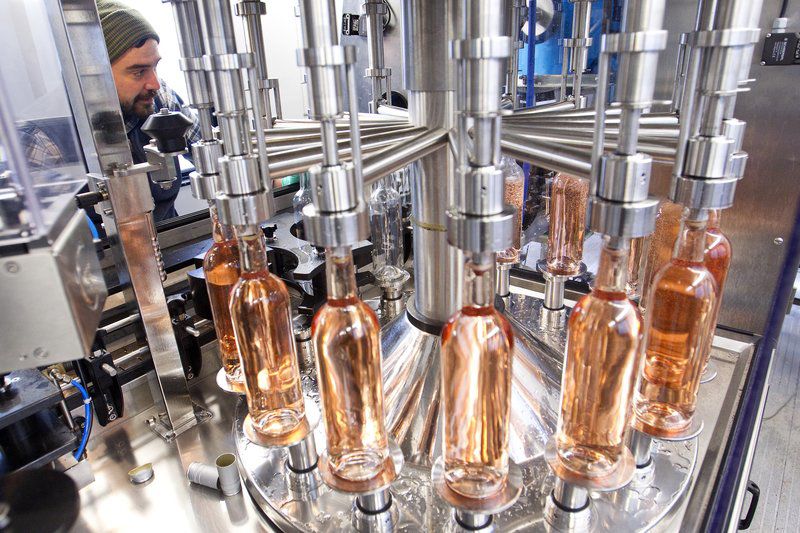 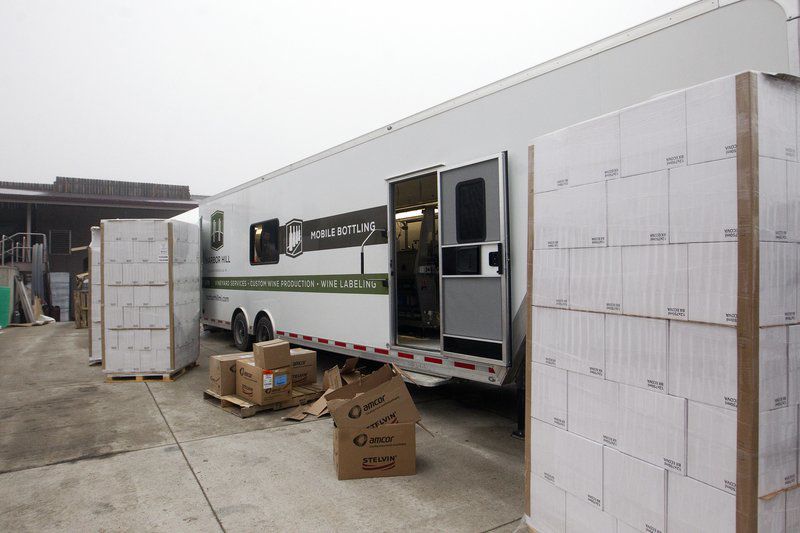 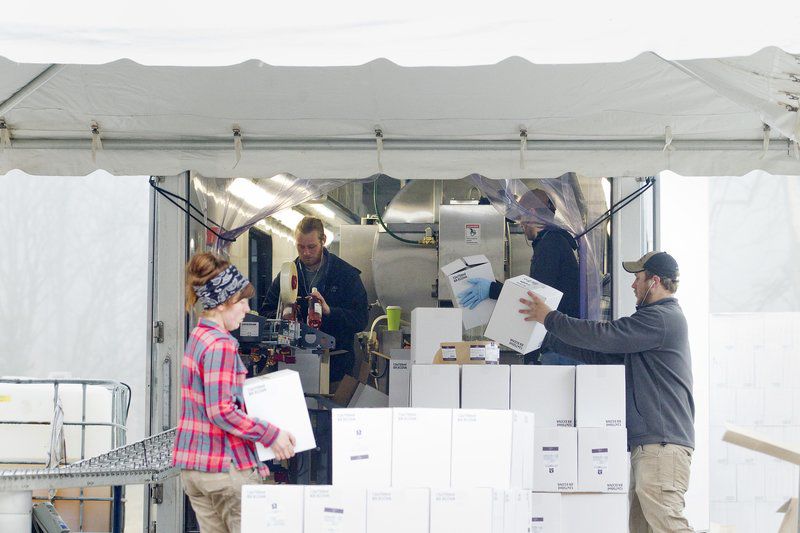 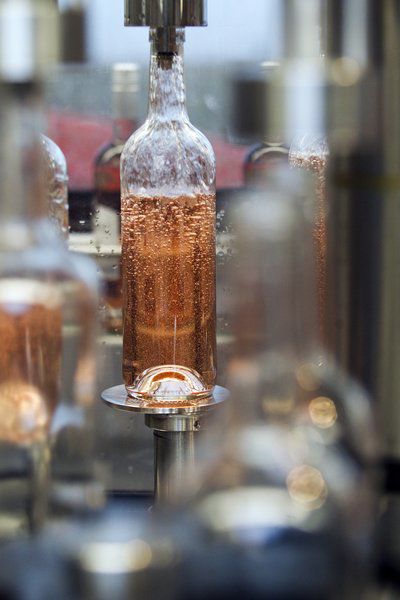 Sam Simpson thinks he has a way to save both — all within the confines of a 37-foot white trailer.

The managing member of Harbor Hills Fruit Farm, Simpson rolled out a mobile bottling service earlier this year. The $600,000 trailer is capable of bottling 1,800 cases or 21,600 bottles a day.

"It's at least three times what a typical Michigan winery can do in a day," said Simpson, who co-owns Harbor Hill along with his sister, Taylor.

The mobile bottling operation can do the job at a fraction of the typical cost. Simpson said wineries are charged between $2.65 and $3.65 a case (12 bottles).

"I think it's going to be a big deal for the area," said Andy Savina, who operates the mobile unit. "There are a lot of small producers in the area. We can bottle in one day what it takes a lot of people 5-10 days doing with their own equipment."

"The idea for this is to provide this service to the area," Harbor Hills winemaker Drew Perry added. "There are a lot of small wineries getting started or they don't want to make the investment because you're only using your bottling line a few days of the year."

Jess Youngblood, owner of Youngblood Vineyard in Ray, was the first to use the Harbor Hills mobile bottling operation. The bottling was the first for the Macomb County vineyard, which first planted vines in April 2016.

Youngblood heard about the mobile bottling operation from Brian Lesperance, of Fenn Valley Vineyards. Both are board members of the Michigan Wine Collaborative. Youngblood said the prospect of purchasing a six-valve bottling line for $150,000 was not an option.

"I can't say enough about how great that experience was," Youngblood said of using Harbor Hills. "He came down here with his whole team and was ready to go. He took all the guesswork out of it for me and my husband."

Youngblood said the Harbor Hills crew came down the night before to tackle the vineyard's first bottling. She said the bottling began at 7:30 a.m. and was completed by 2 p.m.

"It was remarkable," Youngblood said. "It was a breeze."

"Absolutely," she said. "I can't ever see not doing this. I can't see us purchasing our own stuff. It just doesn't make sense. And (the mobile bottling) is just a fraction of the price."

Simpson said — while bottling outside Aurora Cellars on a wet, foggy Thursday — that the trailer is the fruit of two years of labor. It took a year to design and another year to assemble. The trailer itself is from Indiana, the bottling line and labeler is from France, the nitrogen generator is from New York.

"They're all from different parts," Simpson said.

While the Harbor Hills operation made its debut earlier this month, the concept of a mobile bottling operation is not new. Hunter Bottling in Ontario has been running a similar operation for nearly 20 years. Other parts of the United States use mobile bottling.

"This is a very common practice on the West Coast," Perry said. "It's a proven model; it's just no one in the Midwest is doing it."

Simpson and his team got assistance from Hunter Bottling when putting the mobile bottling operation together. The Harbor Hills system is very similar.

"They helped is learn all the tricks of the trade," he said. "I didn't see the need to reinvent anything."

"It's the fastest bottling line that I'm aware of," Savina added. "I like the design of this bottle filler. It's very elegant. It's sound mechanically, so it can't miss an operation or be out of issue with itself. It's a pleasure, honestly."

Simpson said the mobile system also should create a better bottle of wine. He said the bottling line operates away from fermenting areas in the winery, so airborne contamination is minimized.

"Everything that touches the wine is 100 percent stainless," Simpson said. "There's no room for bacteria spoilage. The quality of what we're doing is better."

In addition to the end product, eliminating a stationary bottling line can free up valuable space inside a winery. Simpson said a winery can gain 25-30 percent by not having its own line.

The mobile operation — which has 16 filling valves — is run by one main operator plus one assistant. Each winery provides at least four people to work during the bottling run.

Harbor Hills Fruit Farm, which operates Aurora Cellars as well as Good Harbor Vineyards in Leelanau County, will be bottling at Aurora this month before moving on to Brengman Brothers next month.

"We have a few more on the books and a lot more that haven't scheduled hard dates yet, but are planning on using it," Simpson said. "We're booked solid until then. We'll be bottling four days a week here."

1. Empty bottles are placed on the line at the rear of the truck

2. Wheel-like device picks up the bottle and fills it with nitrogen

3. Bottle is filled with wine

4. Wine bottle is 'topped' with nitrogen

5. Capsule applied over cork then sealed

6. Label applied at one of three labeling stations near the front of the trailer (Bottles can be batch encoded)

7. Bottles proceed toward the rear of the trailer and are put, by hand, into boxes of 12

8. A case of wine is sealed and a code printed on the box

9. A case of wine in a box comes down a conveyor belt

10. Cases of wine are put on a pallet with 60 boxes per pallet. Pallets are wrapped and picked up by a forklift