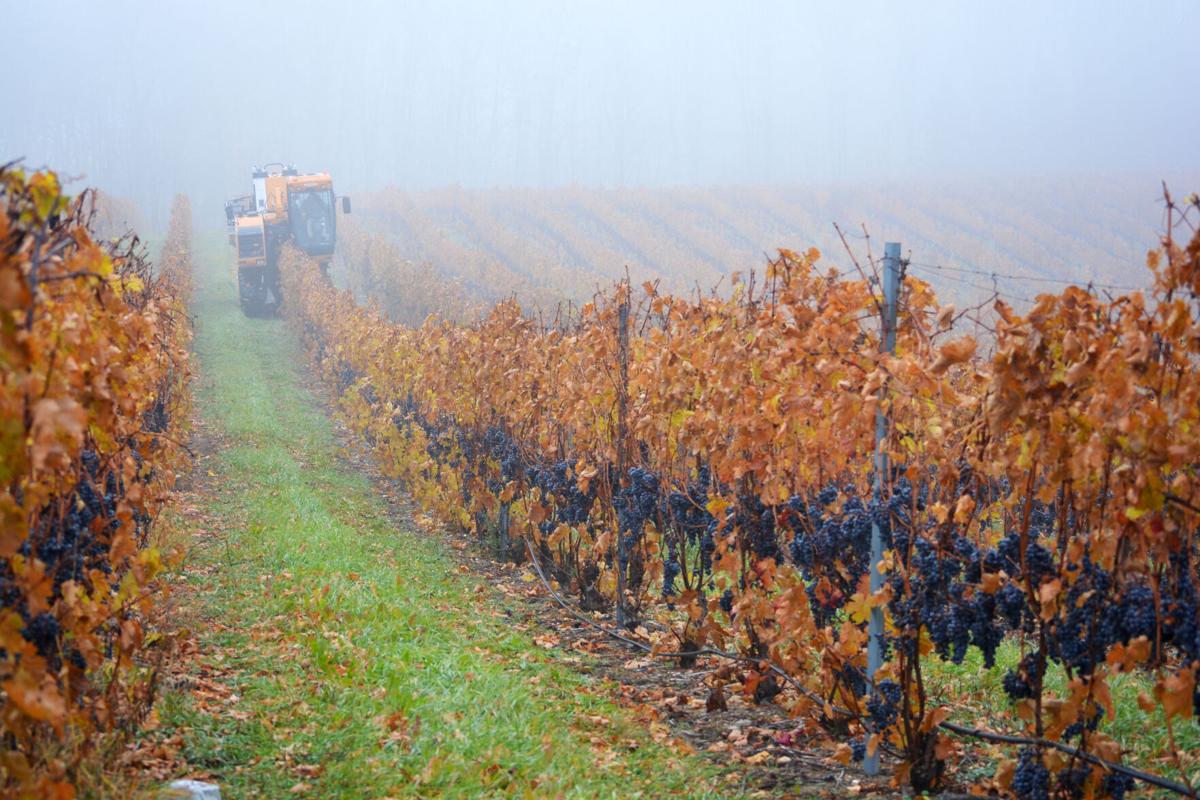 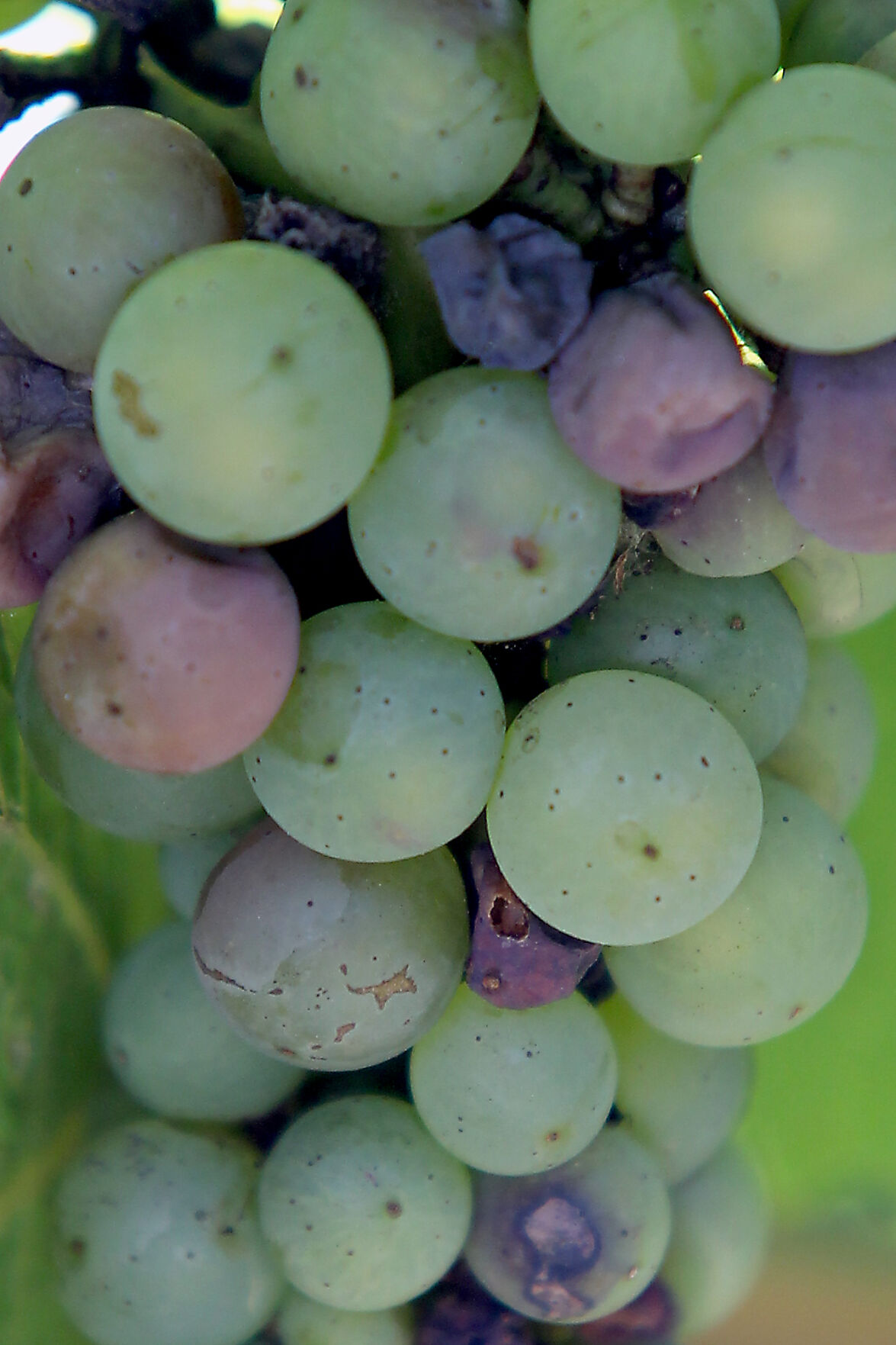 Riesling grapes in a vineyard at Chateau Grand Traverse on Old Mission Peninsula.

Riesling grapes in a vineyard at Chateau Grand Traverse on Old Mission Peninsula.

TRAVERSE CITY — This has been a troubling year, what with a pandemic, unrest in American streets and a juiced-up election season. But 2020, at least, is on track to deliver a solid local grape crop.

“The fruit itself, for the most part, has been exceptional,” said Lee Lutes, head winemaker and managing partner for winery operations at Black Star Farms.

“We’re probably getting close now to being about halfway in,” he said late last week. “We pulled in a lot of the pinot varieties: pinot blanc, pinot gris. We pulled in a little chardonnay for sparkling. And we brought in our first batch of chardonnay yesterday for our stainless chardonnay.”

Grapes fermented and aged in stainless steel can result in a “crisp, vibrant taste,” according to Black Star’s website.

“We’re not yet into the rieslings,” said Lutes. “We are picking some pinot noir for red fruit. We’re probably getting close on the merlot.”

In general, grapes that make white wines are harvested each fall before those that make red wines.

Black Star is based in Leelanau County, but also operates vineyards on Old Mission Peninsula. It should wrap up its grape harvest around the first week in November, which is about normal, Lutes said.

But he was keeping an eye on the weather forecast, because rain — expected all week long — could delay things.

October weather already slowed things down, and even damaged some local grapes.

“We were delayed by that week of rain that we had,” said Marie-Chantal Dalese, CEO and president of Chateau Chantal. “But now we’re going full steam and things are looking great.”

“We had just a tiny bit of hail damage in our vineyard over at Hawthorne Vineyards. But we picked some Gamay yesterday that had record tonnage to it,” she said late last week.

“We grow the grapes, make the wine and manage the tasting room,” Dalese said of Hawthorne.

“We had that slow start to spring, kind of cold and damp, that put us behind in our growing degree days. But then, come summer, that was nice and hot, thankfully. It caught us right up.”

“September was a fairly nice month, and September is often our make-or-break month,” Lutes said. “We did have some rain and some overcast skies in September, but we had a couple nice weeks in there and that kind of pushed things along.”

Local vineyards are approaching the halfway point in this year’s harvest.

Brys Estate Vineyard & Winery, on Old Mission Peninsula, is on track to finish picking around the middle of November.

“The fruit is just starting to ripen to where we feel comfortable to pick,” said Brys vintner Coenraad Stassen.

All the growers contacted by the Record-Eagle agreed local grapes are in good condition this year.

“This summer was so amazing,” Stassen said. “We’ve had a couple cold spells and a lot of rain, but the fruit is holding up nicely. This is probably some of the best fruit I’ve seen in quite some time.”

Brys’ contracted harvest crew includes 25 people, who hand-pick all of the vineyard’s grapes.

“They can knock out quite a bit,” Stassen said Thursday. “We picked this week and we were doing about 27 tons a day.”

Chateau Chantal now is about halfway through its harvest. Seven people work in the vineyard during harvest, plus a cellar team of four.

“We’re usually picking straight eight or nine hours throughout the day,” said Dalese. “As that fruit rolls into the cellar, the team down there is weighing everything as it arrives and then directly crushing and pressing that. Those guys can be here until well past midnight, handling all the fruit that’s been harvested during the day.”

Working in the vineyard

“From a general standpoint, things are good,” he said. “We had a good growing season, we had a good early start in the spring — which is always key for a region like ours.

“Despite all the issues throughout the year, we had adequate help in the vineyards. We participated in a formal government migrant support program that brings people in and guarantees their labor and their payment,” Lutes said. “It’s fairly expensive, but a number of us in the area have gone to this because we’ve had issues in the past getting people, getting good people, getting people that are legal — all that.”

“In the past, we’d always been able to get people adequately, but we just started to have more and more issues.”

Black Star isn’t catering to big groups this year, said Lutes, but the out-of-town groups that have been coming to the tasting room include a larger proportion of serious buyers who are loading up on product.

“They may not be able to get in another couple of months because they’ll be back in their permanent residences,” he said.

Overall this year, said Lutes, “Our business numbers were off. We actually had a month, in September, when we were up over last September. It wasn’t by an awful lot, but it was by some. Sometimes, that can be nothing more than some good weather during key weekends.”

“We’re probably now off 10 to 12 percent, year on year. And for that I’m grateful. I was originally projecting to be off between 30 and 40 percent. We all feel fortunate. That’s just for the winery — I don’t want to give the impression that I’m speaking for the rest of the business.

“I know the inn has been surprisingly busy. The only thing that we’ve really suffered with a bit is events — and that’s understandable, just with gatherings.”

West Coast fires delivered a blow to California’s wine industry, damaging some vineyards and cutting deeply into this season’s production. Opinions are mixed on whether or not that will have a noticeable effect on sales of Michigan wines.

“The last time the Napa area had some fire problems,” said Dalese, “we actually saw some people that would normally visit Napa Valley say, ‘Well, we can’t go there. I guess we’ll stay local and shop northern Michigan.”

“It may direct a few more visitors our way, but that remains to be seen,” Dalese said.

Black Star’s Lutes believes winemakers across the nation already are seeing a dull silver lining in that interruption to California production.

“There was a significant glut of wine on the West Coast that was negatively impacting us, because that glut was driving down prices,” Lutes said. “That glut has now been reabsorbed by a lot of the West Coast wineries, and prices have gone back up on that bulk wine. So I think that’s actually going to have a positive effect.

“But I do think the bigger issue is our local interest in everything we grow and everything we produce in this great state of ours.”

“We’re getting more and more interest in our local wines,” Lutes said. “I think a lot of that has to with people not taking their European vacations this year, in some cases even out-of-state vacations. So they’re closer to home.”