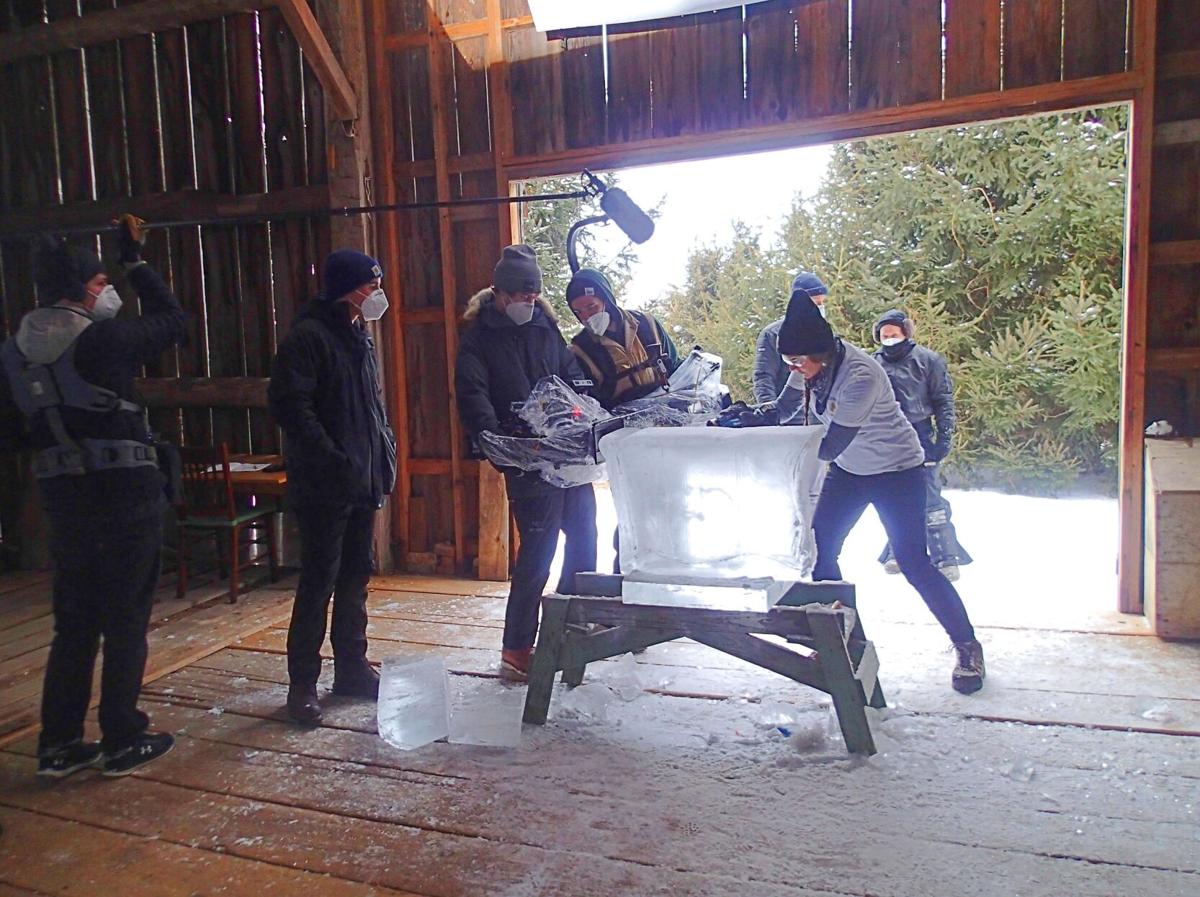 Jovannah Nicholson is filmed carving ice in an Omena barn that belongs to Amanda Holmes and her husband, Dan Stewart. 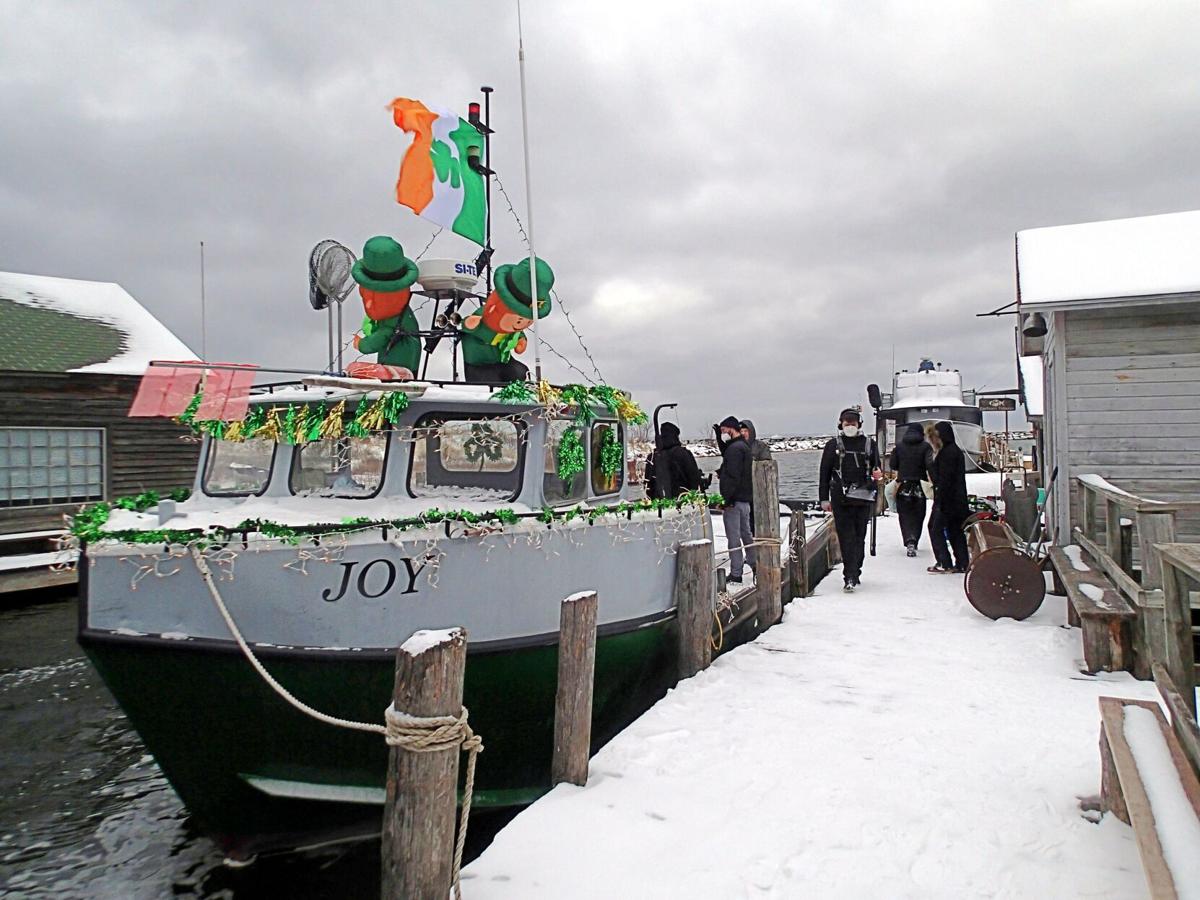 Part of a crew from production company Rathaus Films works on the dock in Fishtown in January.

Jovannah Nicholson is filmed carving ice in an Omena barn that belongs to Amanda Holmes and her husband, Dan Stewart.

Part of a crew from production company Rathaus Films works on the dock in Fishtown in January.

LELAND — Historic Fishtown, one of northwest Lower Michigan’s scenic gems, is highlighted in a new video advertisement for Carhartt and Guinness.

Titled “A St. Patrick’s Day Story,” the short film is subtitled “Guinness x Carhartt | Make Your Own Parade.” It suggests that, though the pandemic has curtailed celebrations, you can make your own socially distanced parade to safely celebrate the holiday.

The message also serves as an advertisement for co-branded Carhartt and Guinness T-shirts, hoodies and knitted hats. Carhartt is based in Dearborn.

Historic Fishtown is very visible in the video, as is the Grand Traverse Lighthouse near Northport, though neither is identified by name. But the video may bring attention to Leelanau County anyway.

“Who knows, with social media, how many people will (realize it was filmed in Leelanau County). This town is recognizable,” said Amanda Holmes, executive director of the Fishtown Preservation Society.

The ad was posted to YouTube last week. Locals quickly discovered it.

“The ad coming out, just is making people really happy,” said Holmes. “It’s so much fun to see Fishtown from outside eyes. I think locals are getting a kick out of it, especially at a time like this. It’s highlighting our fisherman, on our boats — at a time when, in this state, looking toward ‘What’s going to preserve the future of commercial fishing?’”

Local talent appears in the video.

“The fisherman is the captain of the Joy,” Holmes said of commercial fisherman Joel Petersen, who has operated the iconic green fish tug since 2010.

The ice sculptor in the video, Jovannah Nicholson, works as a potter in Grand Rapids, but was introduced to pottery as a teenager in Fishtown. She appeared on the Food Network’s “Ice Brigade” in 2011.

Fishtown was chosen as the central location for the ad by video director Kevin Steen, co-founder of Rathaus Films, based in Detroit and New York.

“The team from Carhartt approached me,” Steen said, with the concept of a winter ad.

“We were kind of looking for snow. It was early January, and there was not a ton of snow around, so we kind of honed in on the Traverse City area. A lot of the crew had to drive from either Grand Rapids or Detroit. We got in contact with Fishtown. It just kind of ended up being our home base.”

Growing up in Grand Rapids, Steen had visited Leelanau County and was familiar with local scenery.

“I traveled there as a kid and spent time in the Glen Arbor area. I’ve definitely been a fan of the aesthetic and what Fishtown represents.”

Steen emailed Holmes in early January, saying he was exploring possible locations for an ad campaign. Holmes looked at online examples of Steen’s work, particularly a video dealing with winter water sports on Lake Superior, and was impressed by their production quality.

“It was just so beautifully shot,” she said. “I thought, ‘Wow, this company, this person, sees something in Fishtown, in this area, and does that quality of work — I am going to answer this email.’ We do get quite a few queries from people wanting to do different things, and over the years we’ve learned that some of them are good experiences and some of them aren’t.”

“We mainly produce feature films and longer form, but when the right commercial project comes along, we love to get together and make something,” said Steen. “We just sold a film to HBO earlier this year.”

“De Lo Mio” began streaming on HBO Max in November. Rathaus premiered another feature film at the Sundance Film Festival and a third at the Berlin International Film, both just before the pandemic lockdown.

A series of approvals are required to shoot commercial video in historic Fishtown. Rathaus breezed through the preliminaries. Then Steen took a swing through the area to pin down shooting locations.

Still in January, Rathaus brought in a production crew of 12, including a COVID-19 health compliance officer to take crewmembers’ temperatures and enforce masking and social distancing. Carhartt sent a crew of eight people from its advertising and marketing department.

“It’s a fanciful story they’re telling,” said Holmes. “You don’t have the actors speaking. You just have this wonderful idea, bringing in people who are skilled in the things that they’re filming.”

Though Petersen is a local, Nicholson has local ties, and the scenery is 100 percent Leelanau County, not everything in the video is local. Petersen can’t legally fish right now. So the fish were acquired from a different legal provider in Michigan who is allowed to fish this time of year.

Steen was so pleased with the images they captured that he’s now editing a longer version that he’s aiming to post on the rathausfilms.com in early March.

“I’m working on a director’s cut. We got so much great footage, it’s nice to sit with it and kind of explore the characters a little bit more and put something together that was my true vision,” he said.

The Rathaus company name stems from an experience Steen shared with his cofounders.

“We made a feature film in Baltimore, and all four of the cofounders were working on it,” said Steen. “One of the houses the crew was staying in was infested with rats. The other was infested with cats. We just happened to be staying in the rat house. We had that bonding experience.”

One of the company cofounders has some German ancestry, Steen said, and mentioned that “rathaus” translates to English as “town hall.”