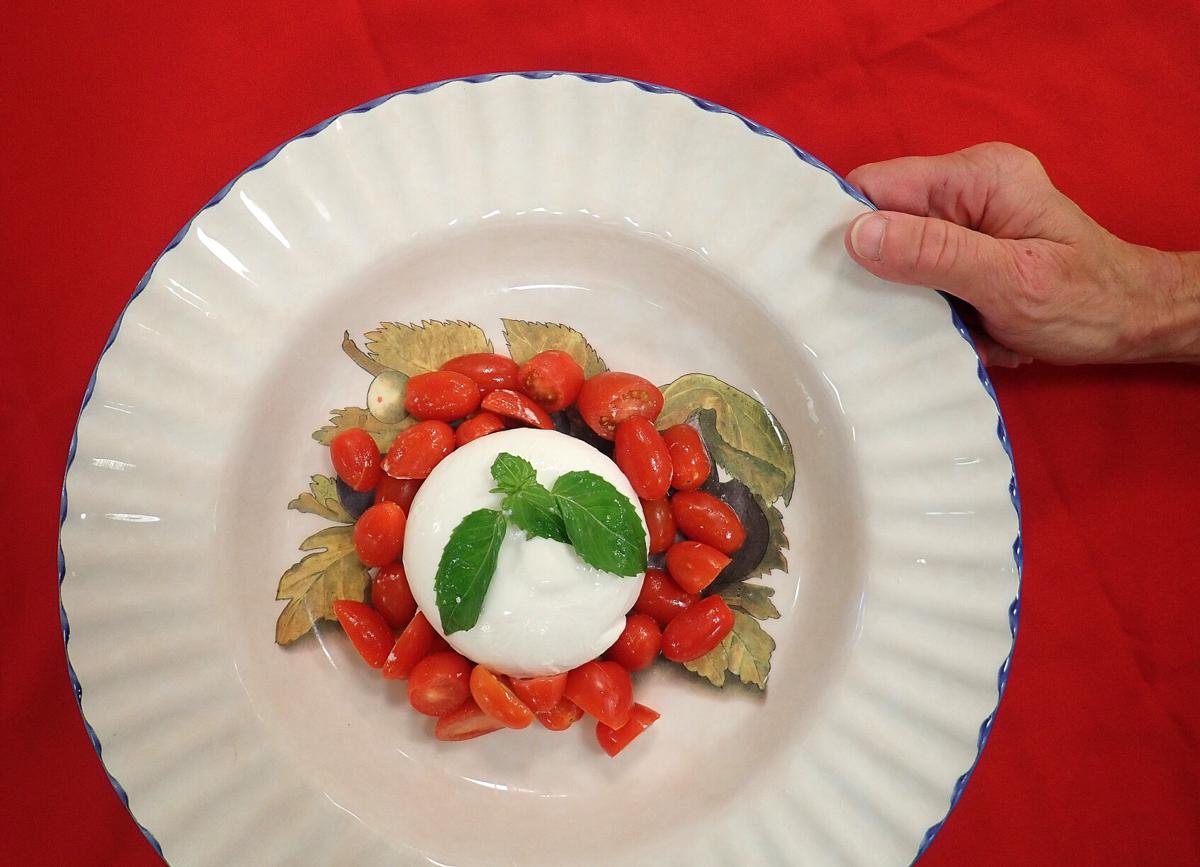 A caprese salad at Buzzelli Foods — mozzarella, tomato and basil on an Italian plate. 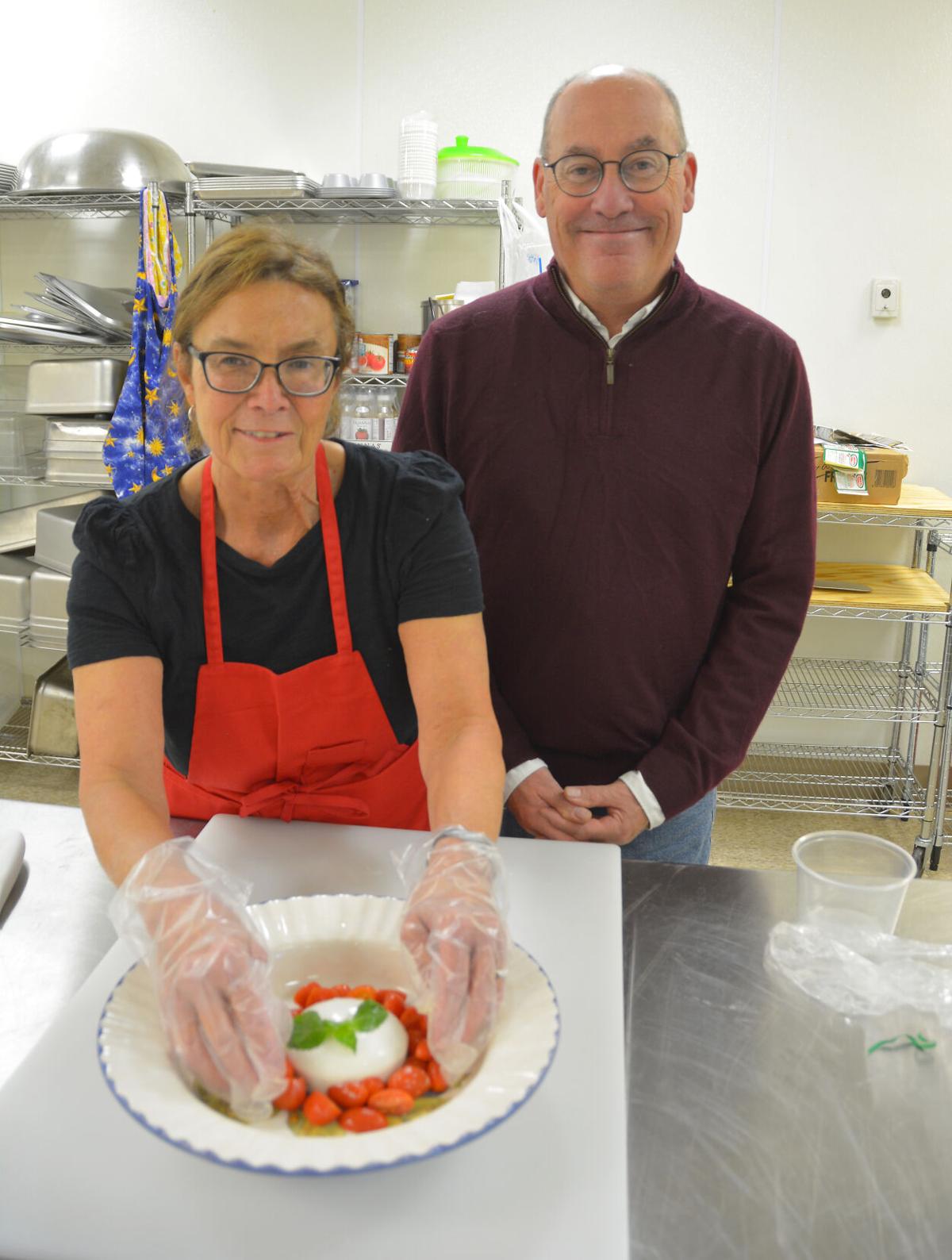 Kathy and Pat Gibbons in the kitchen at Buzzelli Foods. 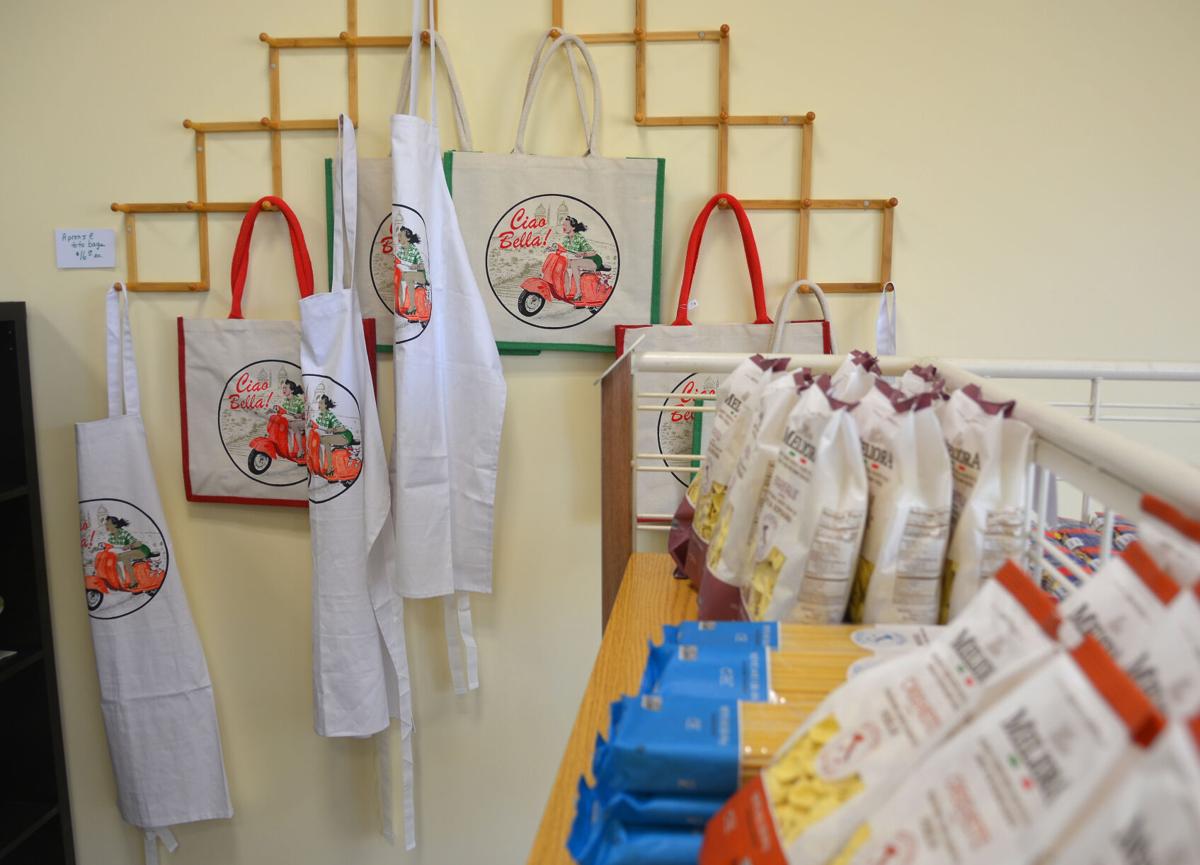 Aprons, bags and food supplies on display at Buzzelli Foods. 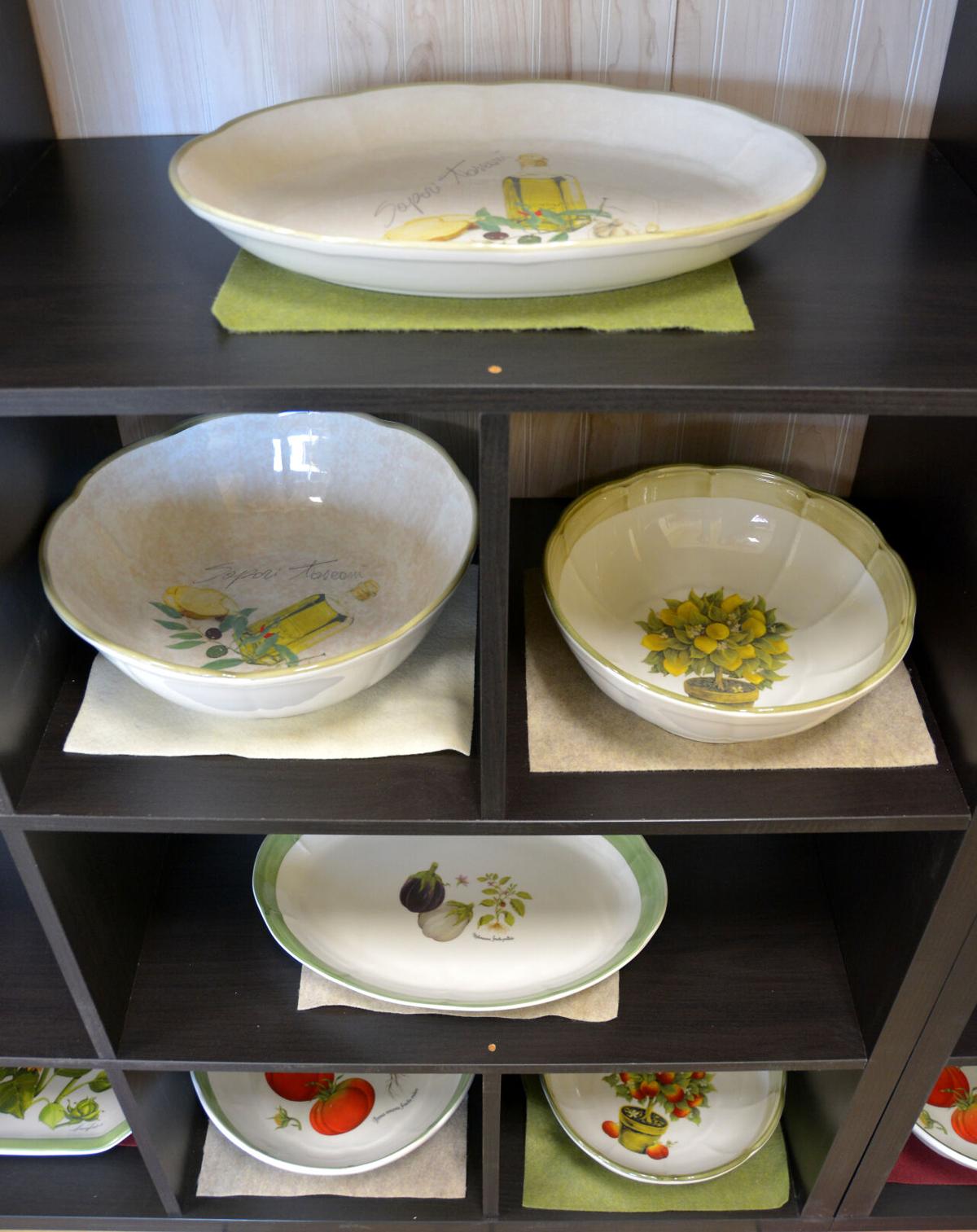 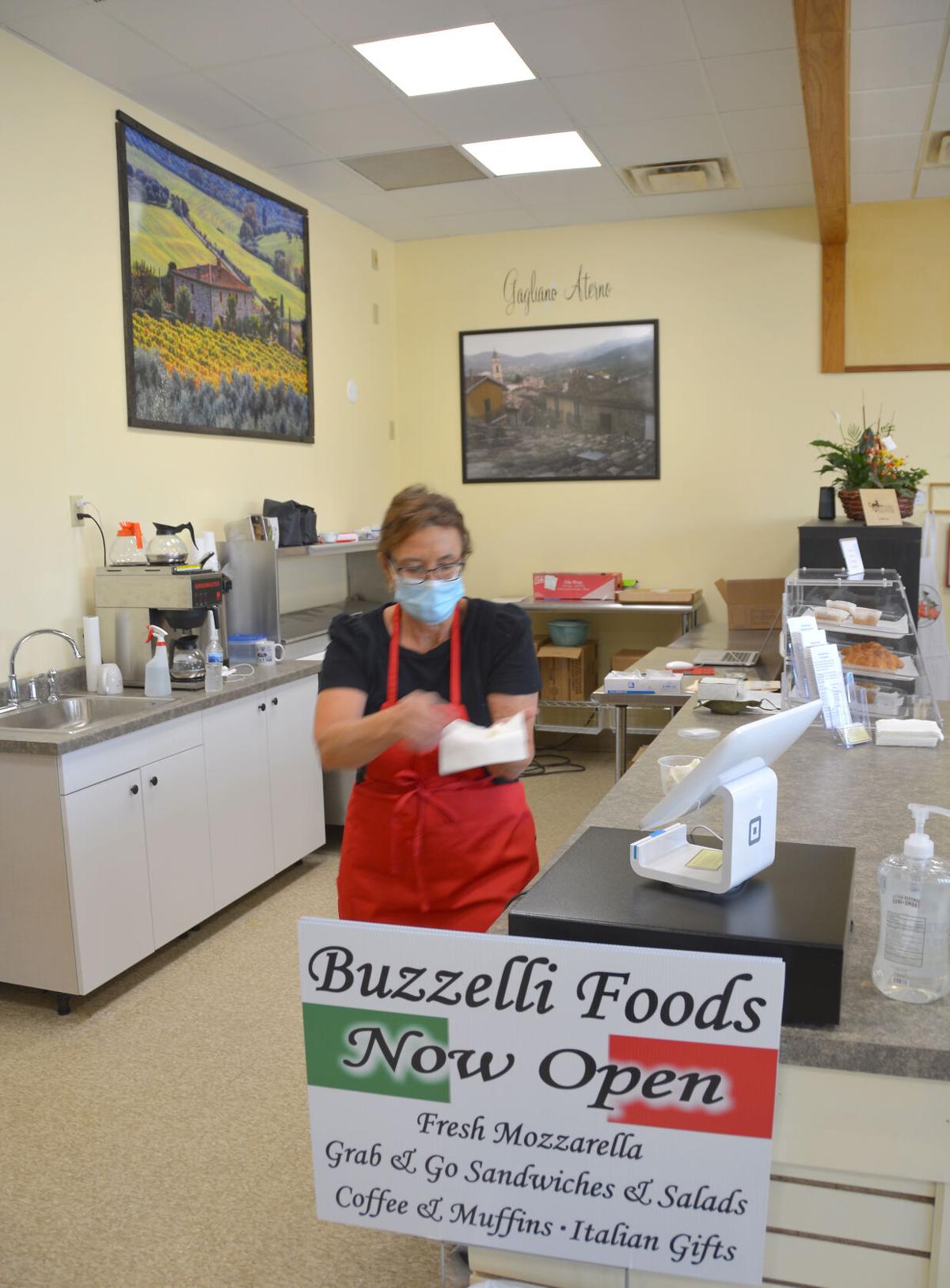 Kathy Gibbons in Buzzelli Foods, at the corner of Hammond and Three Mile roads.

A caprese salad at Buzzelli Foods — mozzarella, tomato and basil on an Italian plate.

Kathy and Pat Gibbons in the kitchen at Buzzelli Foods.

Aprons, bags and food supplies on display at Buzzelli Foods.

Kathy Gibbons in Buzzelli Foods, at the corner of Hammond and Three Mile roads.

“It came with a storefront, and that was not anything we planned to do. But it’s kind of hard not to utilize it,” said Kathy, former Record-Eagle features editor, longtime columnist and former owner of the EuroStop restaurant in Traverse City.

She and husband Pat have been making fresh mozzarella since May and selling it at Fulton Street Market in Grand Rapids.

“We can’t do Traverse City (farmers market), because we buy the curd from New York — it’s not local milk,” she said. “Traverse City wants locally-sourced ingredients. I’m always on the lookout for a local source for the curd, but I have not found one.”

The couple buys mozzarella curd in huge chunks. They cut off pieces and spend hours adding hot water, stretching and folding the mixture to give it a creamy texture. It takes about five hours to convert curd into a 120-pound batch of finished product to sell at the farm market.

“It’s just a different way to be creative,” she said.

The mozzarella business had its roots back before EuroStop opened in 2008.

“For EuroStop, I had gone to a deli in the Bronx,” said Kathy. “They let me come spend three days in their kitchen, and they taught me everything, including how to make fresh mozzarella — which wasn’t even on my radar. They make it and sell it out of there all day, and they were putting it on their sandwiches.”

Mozzarella melted into the back of her mind, but never faded completely away.

“So, after I sold EuroStop,” she said, “’I thought, hey, I could still make mozzarella.’”

Pat helped with both production and sales. The couple built a house in Traverse City, Pat retired a year ago and with more free time, they decided to stop renting commercial kitchens and set up their own. They settled on the former Subway space.

Kathy’s father has been in the specialty foods business his entire life. He imports products from Italy and distributes them to retail stores. He now works for DeLallo, a producer and national distributor of Mediterranean and Italian foods.

“So we decided to use this little space out front to create a little Italian store and sell our fresh mozzarella,” Kathy said. “Because nobody (locally) makes and sells it. And my brother is an Italian food importer, as well, so we can sell things from him.”

Her mother, Elizabeth Kane Buzzelli, authors mystery novels. Her first book was published in 1983. Her books will be sold at Buzzelli Foods, though they’re not yet on the shelf.

Her father, Tony Buzzelli, plans to soon begin cutting and packaging aged Parmesan, Asiago and locatelli cheeses for sale in the store.

Customers can sign up for a monthly specialty food club “share” and pay $40 for a selection of specialty foods assembled by the Gibbonses. They also offer gift collections, packaged with an Italian plate. Gibbons recently visited New York to make a bulk purchase of Italian bowls, now for sale, empty or filled with Italian products.

When the couple isn’t using the kitchen to make mozzarella or sandwiches, they’re renting it as an incubator kitchen to help others interested in food businesses get a start.

Brooklyn’s Pepperoni Rolls & Chicago Style Pizza used the kitchen all summer, Kathy said, and recently moved to its own space in Logan’s Landing. Another local family now is making pierogi on Mondays. They have time slots open in the incubator kitchen.

Buzzelli Foods is open Tuesday through Friday, 7:30 a.m. to 3:30 p.m. They plan to open on Saturdays in December.

“We could be open more hours, but we’re trying to manage our lives,” said Kathy.

“A lot of traffic goes by here. With all the schools, we hope people will start thinking it’s a good place to stop for a quick bite,” said Kathy.

More information is available at 231-421-1569, via email at buzzellifoods@gmail.com, or via Facebook @buzzellifoodstc.

We were on a long car ride two weeks ago. I opened Facebook to pass some time.