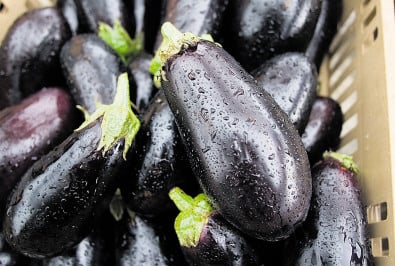 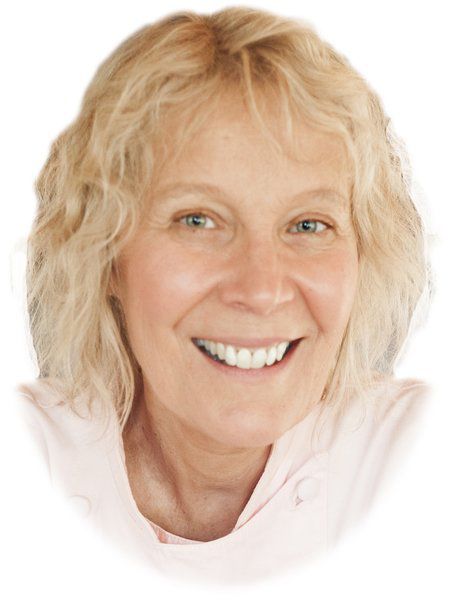 Does an eggplant ever make it through your door and into your kitchen? If it does, will it sit for days on the kitchen counter, looking vibrant and voluptuous, lonely and constantly nagging you to please do something with it?

If eggplant is your personal produce challenge, you are not alone.

Maybe Americans don’t take eggplant seriously. After all, they are purple. Women in the Orient used a black dye made from eggplant skin to stain their teeth gun-metal gray. Could it be the urging of health professionals to avoid nightshades for fear of arthritic attacks? More likely it’s that the eggplant’s spongy, ho-hum, gray interior never quite lives up to its shiny and wildly hued exterior.

Perhaps we should give eggplant a chance.

According to food historians, eggplant probably originated in India, but the first mention of it is from Chinese agricultural texts of the fifth century A.D. From there eggplant spread throughout Asia and the Near East (where it grows as a perennial) then hitched a ride to Spain with the invading Moors and to Italy with Arab traders. The first types of eggplant to reach Europe were egg-shaped and mostly white, hence their name. Eggplant was first cultivated in America by Thomas Jefferson in his Virginia gardens. Thus Thomas might be called the father of American eggplant.

A small culinary controversy arises among chefs when the subject of eggplant sex arises. Some suggest that eggplants come in male and female forms and that the males contain less seeds. Robert Cox of the Colorado State University Cooperative Extension Horticulture puts the controversy to rest when he says that, “Vegetables’ such as eggplant, peppers, tomatoes, cucumbers and squash, are, botanically speaking, really fruits. The fruits themselves can’t be considered ‘male or female.’ Male pollen is transferred to female parts of the flower, resulting in the fruit we eat. As an eggplant fruit matures the seeds become more noticeable. So an eggplant picked when very mature to over-mature might appear ‘seedier’ than others picked when less mature, even those from the same plant.”

Eggplants have a dimple at the blossom end. The dimple may be shaped round or oval. The round-dimpled tend to have more seeds and are less meaty, so savvy cooks prefer oval-dimpled eggplants. Whatever shape or style of eggplant you favor, choose smaller, less mature, heavy fruits with a glossy, taut exterior and no soft spots — they are less bitter-tangy. Don’t keep them for more than a week. They deteriorate, becoming more pungent as they age. If a finger pressed on the fruit leaves a light imprint, it is ripe. If it’s very soft, it’s too old and may be bitter. Keep eggplant a cool, dry place. If you must refrigerate eggplant, place it in a loose plastic bag.

August and September are prime time for eggplant lovers. Whether it’s Japanese nasu, Albanian patëllxhan, Spanish berenjena and Italian melenzana, Indian brinjal, Finnish munakoiso, Russian baklazhán, Polish oberzyna or the British aubergine, you can visit one of our local farmer’s market to see a brilliant swarm of these succulent shapes. They range from a pinball to a pillow and colors from angelic white to royal purple. Try them all.

Caponata is the sweet-sour Italian version of Spanish pisto Manchego and French ratatouille. The secret of great caponata is the same as great ratatouille: cook each vegetable separately, combine, and rest overnight before serving so flavors can develop.

Toss diced eggplant with 1 tablespoon kosher salt, and place in a colander to drain, 20 minutes. Rinse eggplant and blot dry.

Heat a deep 11- to 12-inch skillet over medium-high heat, and add 3 tablespoons oil. When oil is hot, add eggplant, and sauté until browned and tender. Transfer eggplant to a bowl. Add 2 tablespoons oil to pan, and heat over medium heat. Add onions and cook until tender, 5 to 8 minutes. Add celery and tomatoes with juice (and optional anchovy). Cook until vegetables are tender and tomatoes soften, about 5 minutes. Stir in vinegar and cook 1 minute. Scrape vegetables into bowl with eggplant.

Fold in capers, olives and parsley (and optional ingredients). Taste caponata and season with salt, pepper, and more vinegar if necessary. Chill overnight for best flavor or rest 1 hour at room temperature.

To Serve: Bring caponata to room temperature if refrigerated. Eggplant absorbs flavor like pasta, rice, or beans. Taste and re-season with vinegar, salt, and pepper if necessary. Mound caponata into bowl and serve with slices of toasted rustic bread.

When I lived in Brooklyn, this is the way the Middle Eastern restaurants made their baba ghanouji. You might roast whole eggplants on a grill or stovetop as you would red bell peppers, remove the skin, chop the flesh and freeze (for up to six months) and make this tasty dip all winter.

Roast eggplant whole on a grill or on top of low gas flame, turning frequently, until the skin is evenly black and crisp and the inside is soft. Alternatively, broil or grill the eggplant. Set eggplant into a bowl and cover with a plate. Set aside to cool.

Pick off blackened skin and remove stem and discard. If there are excess bits of skin, pat eggplant with paper towel to remove. Dice eggplant finely and evenly to yield about 1-1/2 cups.

To serve: Pile baba ghanouji in serving dish and serve with flatbread.

Asian flavors are particularly wonderful with eggplant. This recipe is good hot or cold.

— Adapted from “The Key to Chinese Cooking” by Irene Kuo.

Rinse and dry eggplant and slice off stem. Cut eggplant in half lengthwise and score cut side of both halves with 1/2-inch wide cross-hatching. Go halfway through the thickness. Steam eggplant halves over boiling water until they are very tender, about 20 to 30 minutes. They will have a slightly sunken look.

Drain off any excess liquid and transfer the eggplant to a serving platter. Heat a small skillet and add canola oil. When it is moderately hot, add garlic and ginger and cook a few seconds until aromatic. Add vinegar, soy and syrup and stir. Remove from heat and stir in sesame oil. Pour sauce over eggplant and serve.

This is good made with the addition of a tablespoon of sesame tahini and a little water to thin. Add it at the end. Finely sliced green onions or cilantro leaves make a colorful, flavorful garnish.

Nancy Krcek Allen has been a chef-educator for more than 25 years and has taught professional and recreational classes in California, New York City and Michigan. Her culinary textbook is called “Discovering Global Cuisines.”