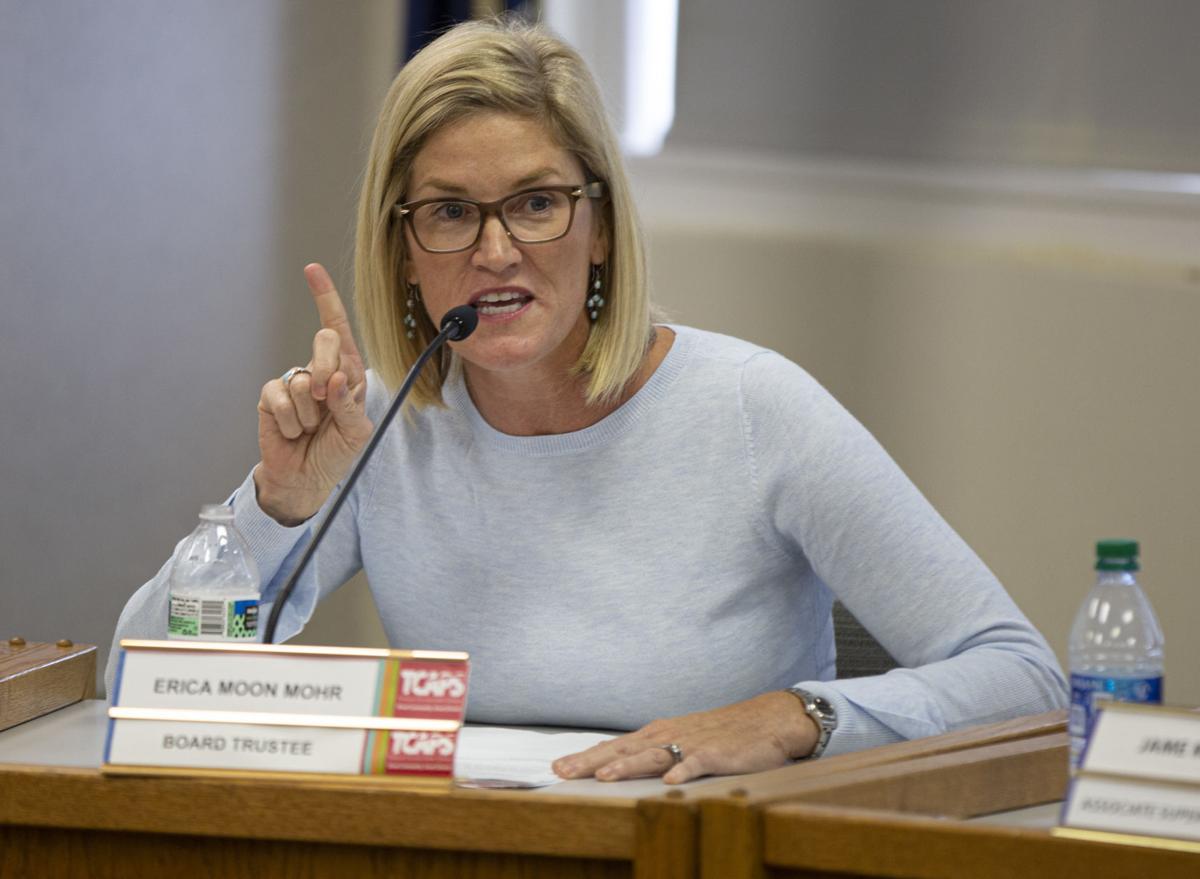 Above, from left: TCAPS Board of Education Trustee Erica Moon Mohr speaks during a special meeting on Oct. 11, 2019. 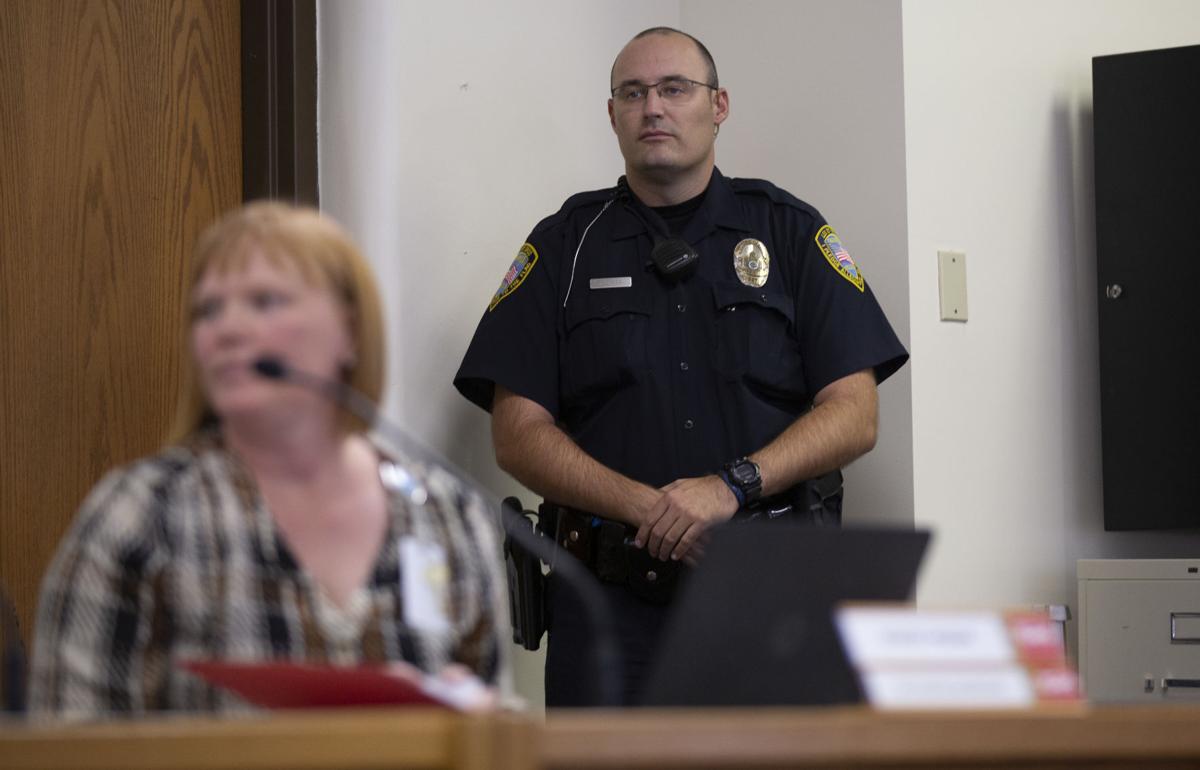 A Traverse City Police officer stands during a special meeting of the Traverse City Area Public Schools Board of Education on Oct. 11, 2019.

Above, from left: TCAPS Board of Education Trustee Erica Moon Mohr speaks during a special meeting on Oct. 11, 2019.

A Traverse City Police officer stands during a special meeting of the Traverse City Area Public Schools Board of Education on Oct. 11, 2019.

Neither Mullet nor Butler, who is no longer with Clark-Hill, returned multiple calls for comment during the past week.

The accusations stem from events surrounding the resignation of former TCAPS Superintendent Ann Cardon in October 2019.

Moon Mohr claims that during a heated TCAPS board meeting on Oct. 11, 2019, Butler shouted her down as she read a letter deriding some of her fellow board members for what she believed were inappropriate actions against Cardon during a closed session days earlier. Butler told Moon Mohr to “stand down” and warned that she was violating or in danger of violating closed session confidentiality protected by the Open Meetings Act.

According to Moon Mohr’s complaint letter, on Oct. 28, 2019, she met with Mullet to talk about the events surrounding Cardon’s exit. Moon Mohr states in her grievance that Mullett told her anything said in that conversation was protected by attorney-client privilege. Moon Mohr also said Mullett used the contents of privileged conversations to file a criminal complaint with the Michigan State Police in December 2019.

Last month, TCAPS retained Thrun Law Firm — which had served TCAPS since 1953 before the change to Clark-Hill in 2019. Switching legal representation was a priority for Moon Mohr after the election and appointment of four new board members who replaced several trustees with whom Moon Mohr had contentious relationships.

Moon Mohr said there was “so much static” surrounding the board before January.

“I believe in doing what’s right and standing up for what’s right — and this is definitely doing that,” Moon Mohr said, adding that she hopes some actions — either sanctions, license suspensions or disbarment — are taken against Mullett and Butler.

Scott Newman-Bale, who took over as TCAPS board president from Sue Kelly last month, was aware Moon Mohr would file grievances and said he does not have any issue with it. He said neither Clark-Hill nor Mullett and Butler represent TCAPS anymore and that Moon Mohr made a “personal decision.”

“If anything, it’s creating closure on the situation,” Newman-Bale said. “No one is in conflict. The board isn’t in conflict with Erica. No individuals are in conflict. This is purely an Erica action and not a board concern.”

Moon Mohr believes the full board has grounds for a malpractice case against Clark-Hill, calling some of the recommendations and advice from Clark-Hill “crazy.” That included “forcing” trustees to sign a non-disclosure agreement while in closed session during the Oct. 11, 2019, meeting, according to Moon Mohr’s grievance letter.

“There’s a lot of pieces looking back that just are eye-opening now,” Moon Mohr said. “I really believe the legal advice given at the time — not getting into specifics — was pretty awful.”

Local attorney Grant Parsons attended the Oct. 11 meeting. He has been an outspoken critic of TCAPS and previous TCAPS boards. Parsons said Butler’s and Mullett’s actions are something he’s never seen nor heard of — and they strike him as a conflict of interest.

Parsons also questioned if Mullett acted on her own in filing the report or if someone on the board directed her to do so.

“The TCAPS backdoor puzzle is a long way from being solved,” he said.

Ken Mogill, an attorney who specializes in professional ethics and is an adjunct professor at Wayne State University Law School, said the situation isn’t exactly black and white. School district legal counsel represents the board of education as an entity. That representation does not include individual board members for their individual conduct, Mogill said.

If a trustee goes against board policy and the lawyer believes the trustee’s conduct is placing the board as a whole at risk, the lawyer can protect the interests of the board through means he or she deems appropriate.

Mogill said that does not require the lawyer to file a police report, but it could warrant the lawyer taking protective action so the board “does not get dragged down by the improper conduct of one board member.”

In those situations, Mogill said an attorney usually takes direction from the board rather than acting on their own.

Although Mogill is not privy to all of the facts, he said Mullett could have been trying to “protect the board from a rogue member.” He added, however, that filing a criminal complaint likely was “overboard.” Mogill said it could have been made clear to the public that Moon Mohr’s actions were her own and not authorized by the board.

As for attorney-client confidentiality, Mogill called it the “foundation of our legal system” and said almost no circumstances exist in which a lawyer is “duty bound to reveal information learned in confidence for the purpose of seeking criminal prosecution.” Revealing such information puts the lawyer at “significant risk” of disciplinary proceedings, Mogill said.

One caveat Mogill added is that if the individual board member acted on his or her own and the lawyer was trying to protect the board, then there would be no violation of the obligation of confidentiality.

Officials from the State Bar of Michigan declined to comment or provide context on the situation.

Brad Banasik, legal counsel for the Michigan Association of School Boards, declined to comment specifically on the situation only to say that anyone can report an OMA violation to law enforcement or the county prosecutor’s office.

TRAVERSE CITY — Two weeks before the TCAPS Board of Education moved to find a resolution to a year-long lawsuit, the district changed its lega…