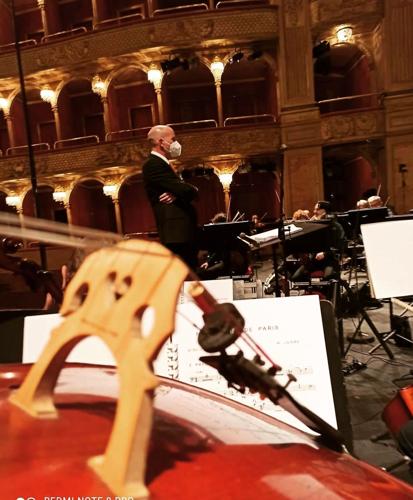 Kevin Rhodes was called to Rome to conduct a complex and tricky piece by the noted film composer, Maurice Jarre. 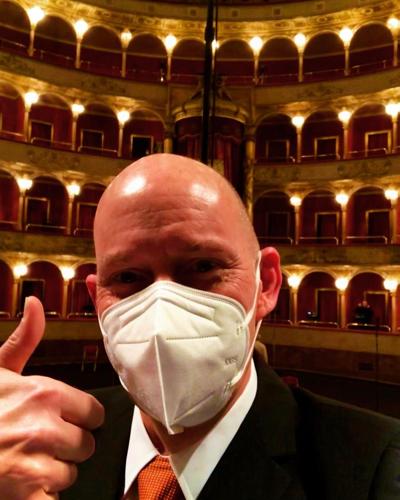 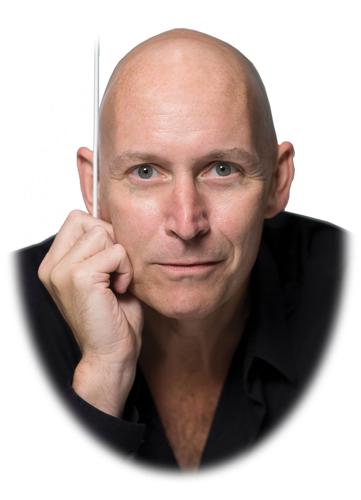 Kevin Rhodes was called to Rome to conduct a complex and tricky piece by the noted film composer, Maurice Jarre.

Everyone who has seen more than a few movies has seen films about performers, whether it’s Lady Gaga, or Barbra Streisand, or Judy Garland in “A Star is Born” or Mikhail Barishnikov and Gregory Hines in “White Nights,” or any number of musicals from the glory years of the great MGM musicals.

While much about those films is exaggerated to make for an entertaining cinematic experience, some things do actually happen in reality. One of those things is the call out of the blue to come do some performance on short notice. This is something every musician has experienced, whether it’s being called to fill in at someone’s wedding, or to fill in for a sick musician in the Traverse Symphony Orchestra. Over the years I’ve been fortunate to have had a number of those calls. Sometimes you can go and do it, and sometimes not. There are a few that I really regret not being able to do, I can tell you!

A couple weeks ago I got one of those calls, which in this time of the pandemic is rather the last thing I expected to be happening right now. So when my phone rang in the middle of the night Traverse City time, I just dully reached over and quickly switched off the ringer and went back to sleep. A few hours later I was more than shocked to find a message from the director of the Rome Opera House Ballet, Eleonora Abbagnato asking me if I could come and record a ballet we had done together when she was an “étoile” (literally star in English) of the Paris Opera Ballet. I had another message from one of my European agents with the details.

Well, amazingly enough it did happen to fall when I could go, but a number of hoops needed to be gone through to make it happen. These included the director for the Rome Opera, who in these circles is an incredibly important person, personally making contact with the Italian Consulate in Detroit, which would be the branch to issue my work visa. This is normally a process which requires several months of bureaucratic red tape to make happen. Well, an hour later I was in my car headed down to Detroit to take care of the paperwork. There was an added twist that the office was closing the next day for several days as they were moving their offices right then as luck would have it! In any event that all worked out, and one week later I was outfitted in enough protective gear to prevent one microbe from entering my facial region and on a long flight to Rome, Italy! On the days in between I rehearsed and recorded with a group of the TSO strings our streaming February/March concert in music of Bach, Vivaldi, Albinoni and Pachelbel. More details on that at traversesymphony.org.

Back to the piece I am here in Rome rehearsing. The reason I was called is that it is a very complex and tricky piece by the noted film composer, Maurice Jarre whose earliest successes include “Laurence of Arabia” and “Doctor Zhivago.” It is a ballet of the Hunchback of Notre Dame story. It is a work which isn’t performed so very often, so the pool of conductors who know it are few. We have an orchestra of nearly 100 musicians and a full men’s chorus for this piece. It was written in the mid ‘60s when size and cost were no object.

So I arrive in Rome for the very first time in my life. Although I’ve been many places in Italy to conduct — Milan, Verona, and Naples — I’ve never had the pleasure of being in Rome before. Unfortunately this trip is: No.1, all business, and No. 2, it’s not the time when one is grouping around crowded tourist destinations in any event. So I arrive on a Wednesday evening, am first driven by the apartment of an administrator from the opera house who has the key to the apartment in which I’ll be staying, which was organized by another agent I work with who happens to live in Rome, and the most important thing ... the score! So after about 30 hours of burying my head in the 90-100 minutes of this complicated and rather illegibly handwritten score, we begin orchestra rehearsals on this work that the orchestra has also never seen or heard before with its tricky rhythms and episodic music.

We will record it and do a live radio broadcast of the score on the Italian national radio sender, RAI. All very exciting and fun indeed!

I once wrote in these pages about the things we take with us as we go about our lives, and I must say I’m very happy and honored to be bringing a little bit of the Rome Opera House with me when I return to Traverse City the day after the broadcast!

Everyone at the Traverse Symphony is ready to jump, jive and wail this weekend for the debut of the TSO Jazz Orchestra.