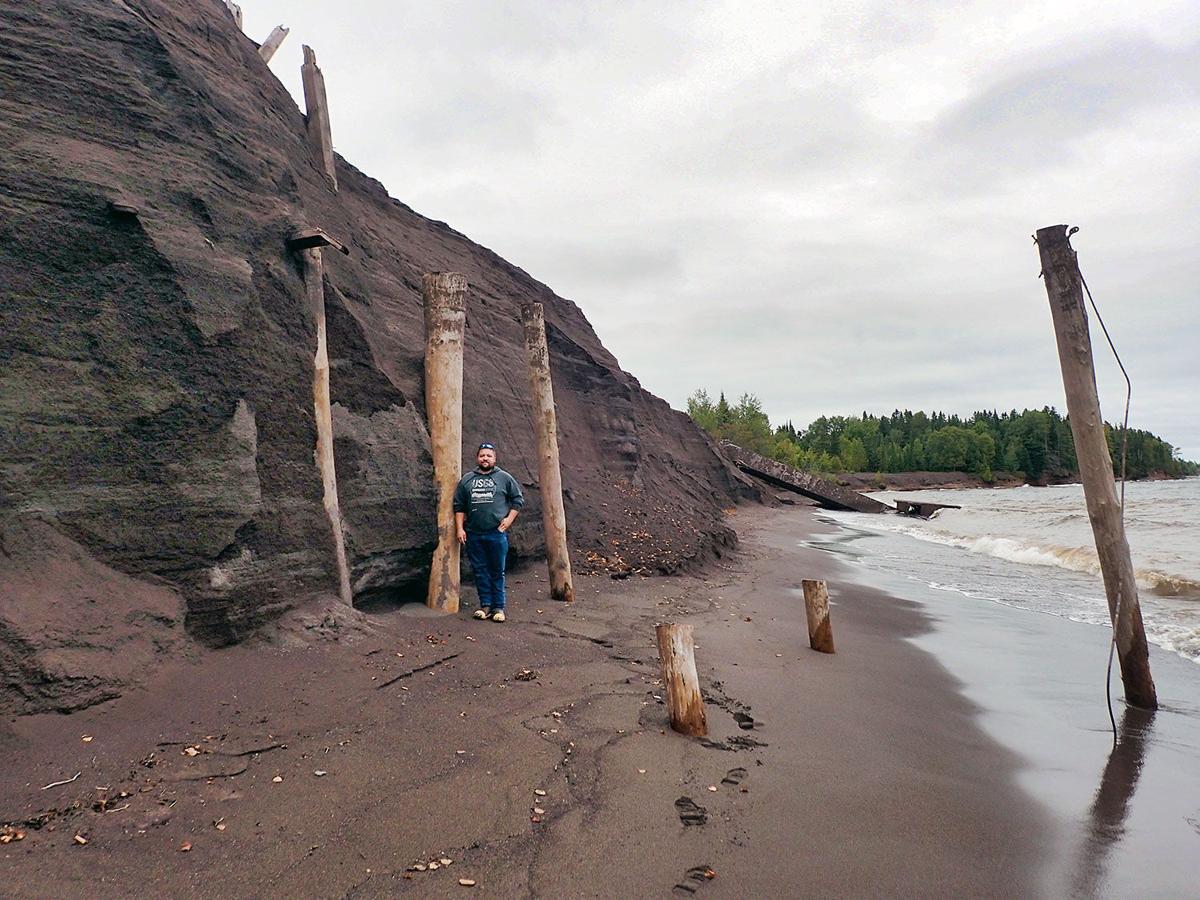 This photograph shows a high scarp cut into the large pile of stamp sands at the town of Gay, in the Upper Peninsula's Keweenaw Peninsula. Nearly a century of erosion by waves and currents transported millions of cubic yards of mine tailings along the coast and spread them across the adjacent lake floor. 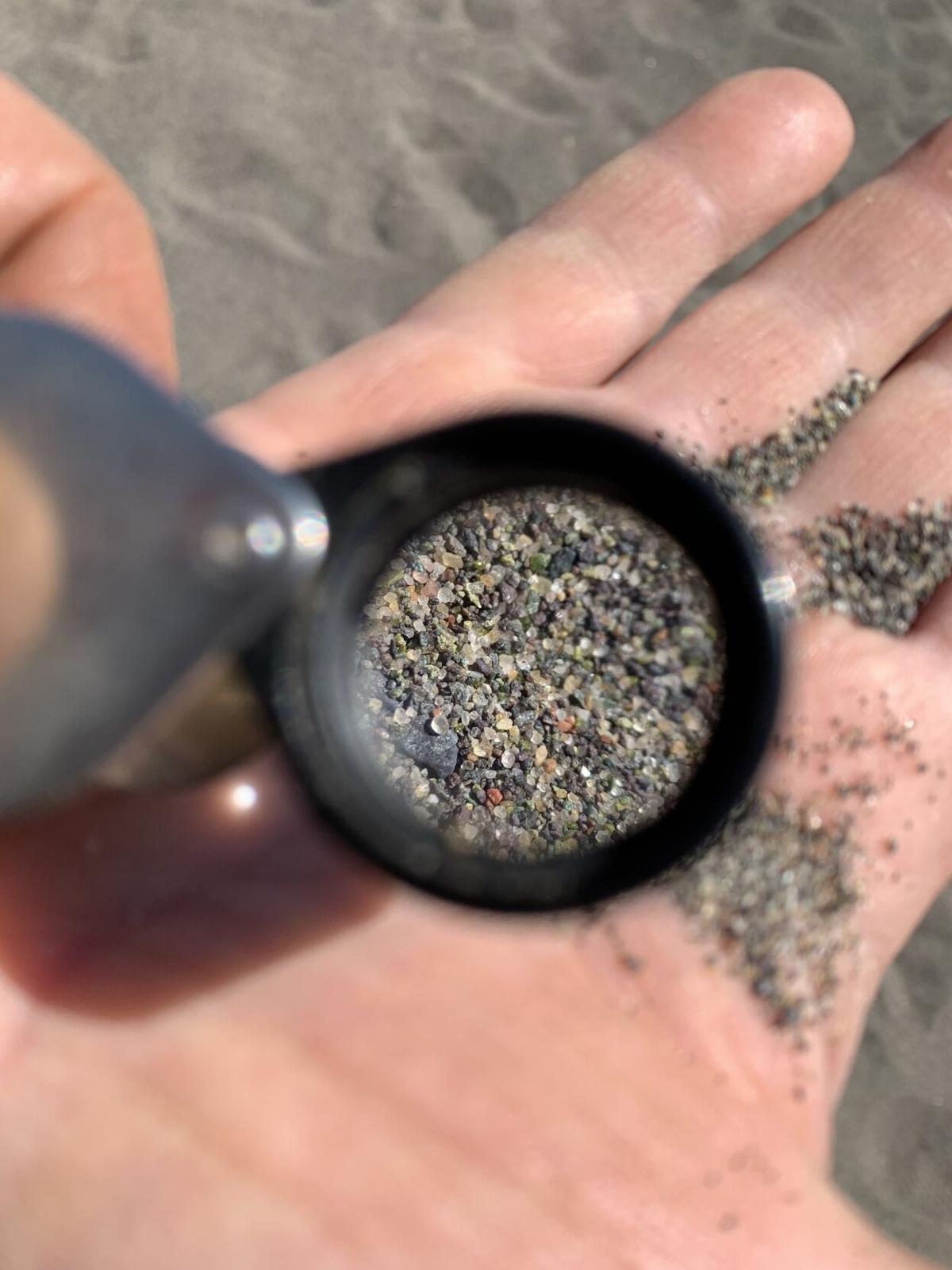 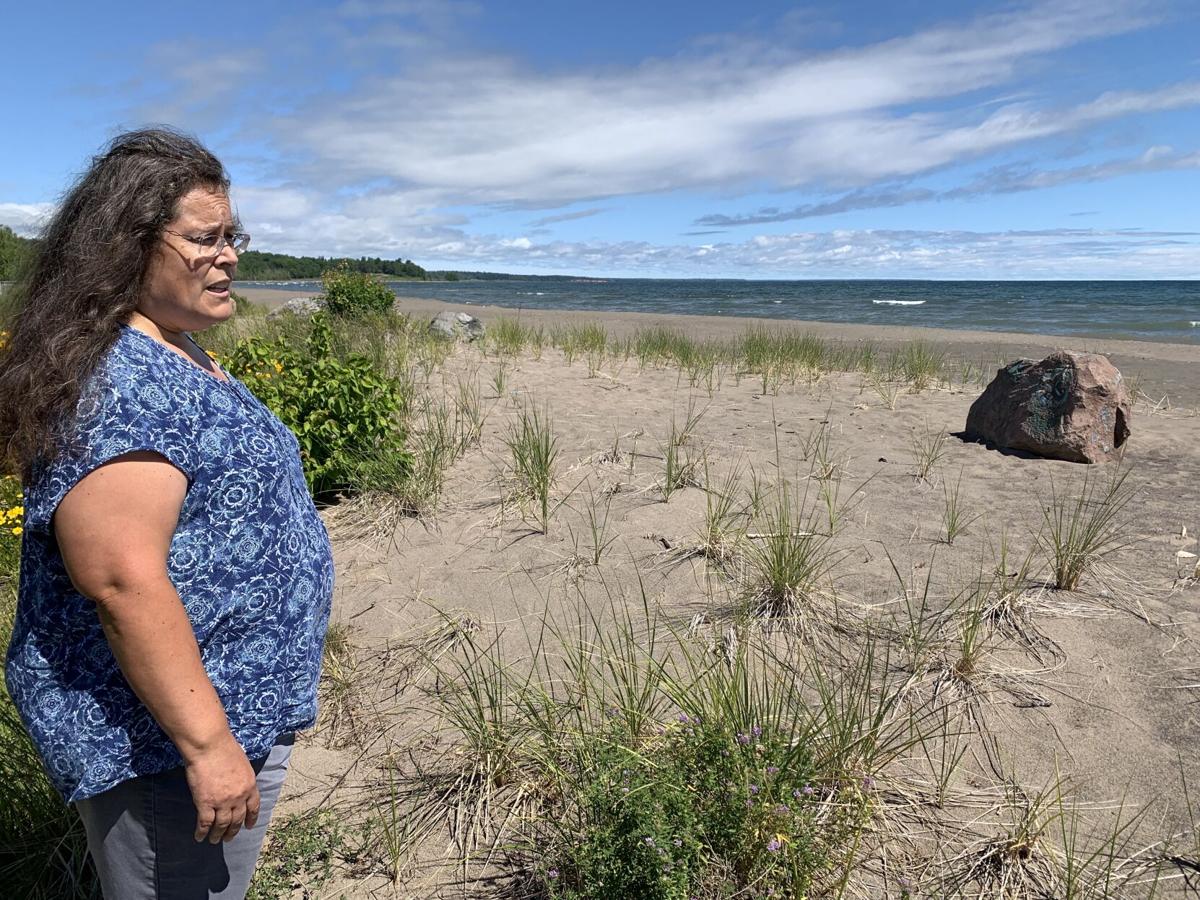 Evelyn Ravindran stands on the edge of the stamp sands at Sand Point in Baraga. 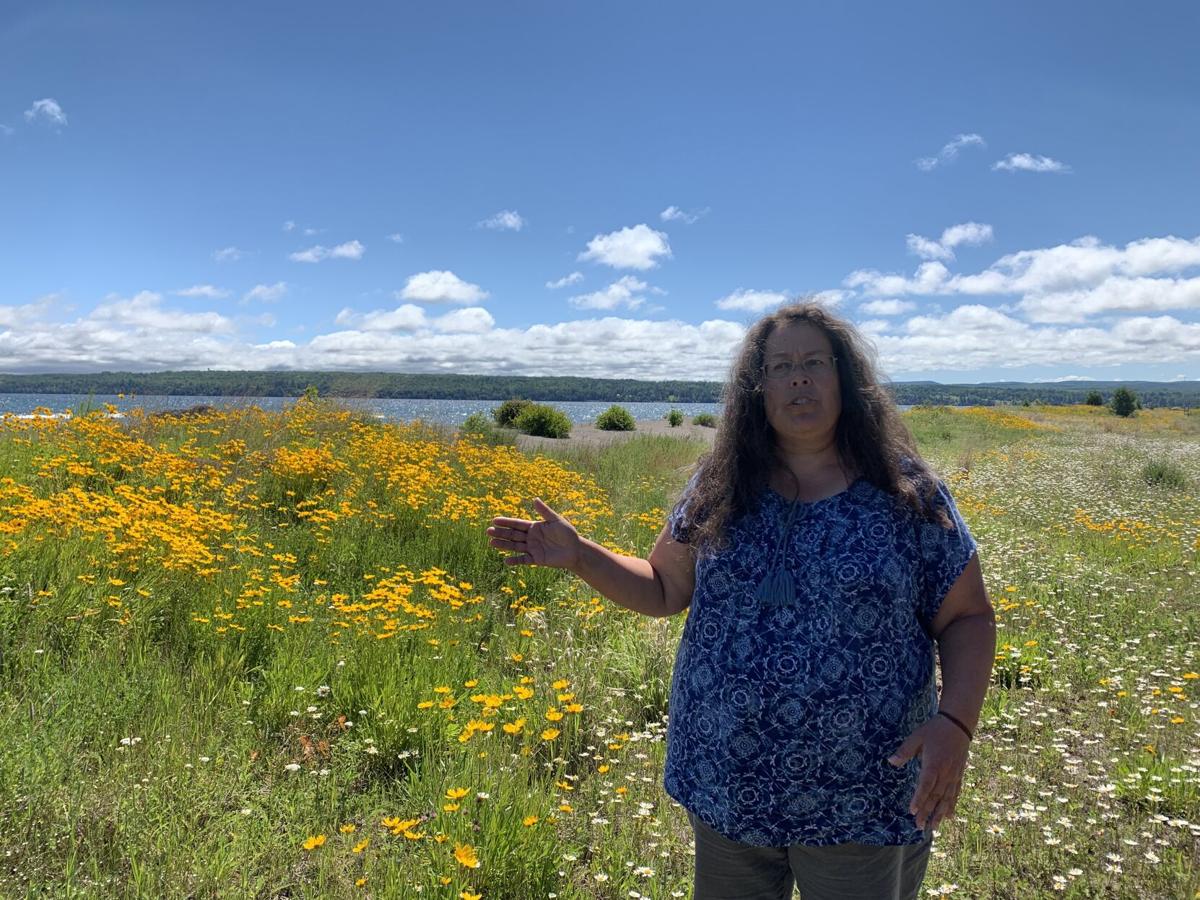 Evelyn Ravindran, natural resources director for the Keweenaw Bay Indian Community, stands on the stamp sands cap and restoration project at Sand Point, near the tribe's pow wow grounds in Baraga along the shores of Lake Superior's Keweenaw Bay.

This photograph shows a high scarp cut into the large pile of stamp sands at the town of Gay, in the Upper Peninsula's Keweenaw Peninsula. Nearly a century of erosion by waves and currents transported millions of cubic yards of mine tailings along the coast and spread them across the adjacent lake floor.

Evelyn Ravindran stands on the edge of the stamp sands at Sand Point in Baraga.

Evelyn Ravindran, natural resources director for the Keweenaw Bay Indian Community, stands on the stamp sands cap and restoration project at Sand Point, near the tribe's pow wow grounds in Baraga along the shores of Lake Superior's Keweenaw Bay.

BARAGA — Two small children played in the day’s gentle surf on a seemingly unending beach on the Keweenaw Bay shoreline, running back and forth along dark-colored sands warmed by the summer sun and coarse to the touch.

Up close, those tiny particles of sand tell a dark, toxic history.

Beneath the children’s feet at a place called Sand Point were stamp sands, an unstable, coarse and pebbly mining waste that contains copper remnants and contaminate the environment with exposure to the heavy metal. The pollution marks the legacy of the Keweenaw Peninsula’s copper-mining history, both washed up along the region’s formerly sugar sand beaches and now blanketing critical fish spawning habitat beneath the water’s surface.

More than 150 years ago during the copper rush in Michigan’s Upper Peninsula, workers used mechanical stamps to pulverize stone into rubble and more easily remove the valuable metal from the remnants. The copper comprised only a small fraction of the stone’s content, and over time a spoils pile grew to more than 22 million tons along the water in Gay, a Lake Superior town in the heart of the Keweenaw Peninsula’s eastern shoreline.

By the middle of the 20th century, constant wave action from the largest and most northerly Great Lake washed about 10 million tons of the stuff for miles down the shoreline and another 10 million tons out into the lake. The mine tailings emit copper when underwater and have, over time, smothered the valuable fish habitat on Buffalo Reef and coated what formerly were white, sandy beaches and bottomlands.

Work at the site over the last decade involved first dredging to remove much of the stamp sand, followed by placing a cap of sandy-loam soil over the site. Goals were to stabilize the changing landscape and both restore and enhance wildlife habitat and biodiversity at an attempt to mitigate the toxicity of the leeching stamp sands.

More than 50 mounds were built and planted with native seed mixtures that included 29 species.

“It doesn’t look like how it did growing up. It was very sterile land, coarse and hurt your feet,” said Kathy Smith, KBIC tribal member and habitat specialist.

Smith said the overall biodiversity of Sand Point significantly improved since the project began, with plant species such as coreopsis, bee balm and dune grass flourishing. Plants that survive must be able to withstand scrapes from wind-blown stamp sands in the rugged terrain, but many do, she said.

“There’s a deep passion being able to stand here and see all the thriving life,” Smith said.

That means striving to mitigate the effects of the toxic mining waste for the next seven generations, a guiding principle of the Anishinaabe people.

The problems associated with stamp sands extend far beyond the beach, now drifting beneath the waters of Lake Superior toward a 2,200-acre natural cobble feature that plays a vital role in the health of the lake’s fishery.

Buffalo Reef historically serves as critical spawning habitats for much of Lake Superior’s lake trout, walleye and whitefish populations. Scientists estimate more than 35 percent of the reef is already covered in the toxic sands, which resulted in those areas largely falling barren of both fish and invertebrate life.

“The problem is where they dumped it and how far it’s drifted,” said Steve Check, Buffalo Reef project manager for the U.S. Army Corps of Engineers. “We can’t let one of the biggest reefs in Lake Superior die.”

The feasibility study by the multi-agency Buffalo Reef Task Force worked the more than a dozen initial options down to two choices: build a large revetment or embankment around the remaining pile of stamp sands, or relocate the toxic stuff to an upland area away from critical near-shore wetlands and the wave-washed shoreline.

Officials said the ultimate decision can be expected to be rolled out for public review by early spring next year.

“It’s important because it’s a large issue in a relatively remote and pristine area,” Parent said. “That’s borne out by the funding that’s been made available to address this problem.”

Combinations of tribal, state and federal dollars have all been dedicated to this environmental restoration project; authorities already spent upward of $10 million on shoreline efforts and the development of the long-term solution, said Todd Nettesheim, deputy director of the U.S. Environmental Protection Agency’s Great Lakes National Program Office.

“This is an historical issue that has come upon us from the mining activities in the late-1800s,” he said.

Nettesheim underscored the importance of the combined effort of more than a dozen agencies to restore Buffalo Reef because of the broad implications for the lake-wide fishery and cultural significance to the local Indigenous people.

Ravindran said she worries without success on the reef project, there may soon be nowhere for many Lake Superior fish to lay their eggs, or be able to feed and thrive during spawning season.

Scientists modeled the effects of the drifting stamp sands and estimate without action as much as 60 percent of Buffalo Reef could be covered in less than a decade. This would cause economic and cultural effects for KBIC fishers and the wider community that depend on the fish for subsistence.

“The legacy mining effects have a real impact here,” Ravindran said. “It was over 100 years ago that this happened and we are still dealing with it today.”