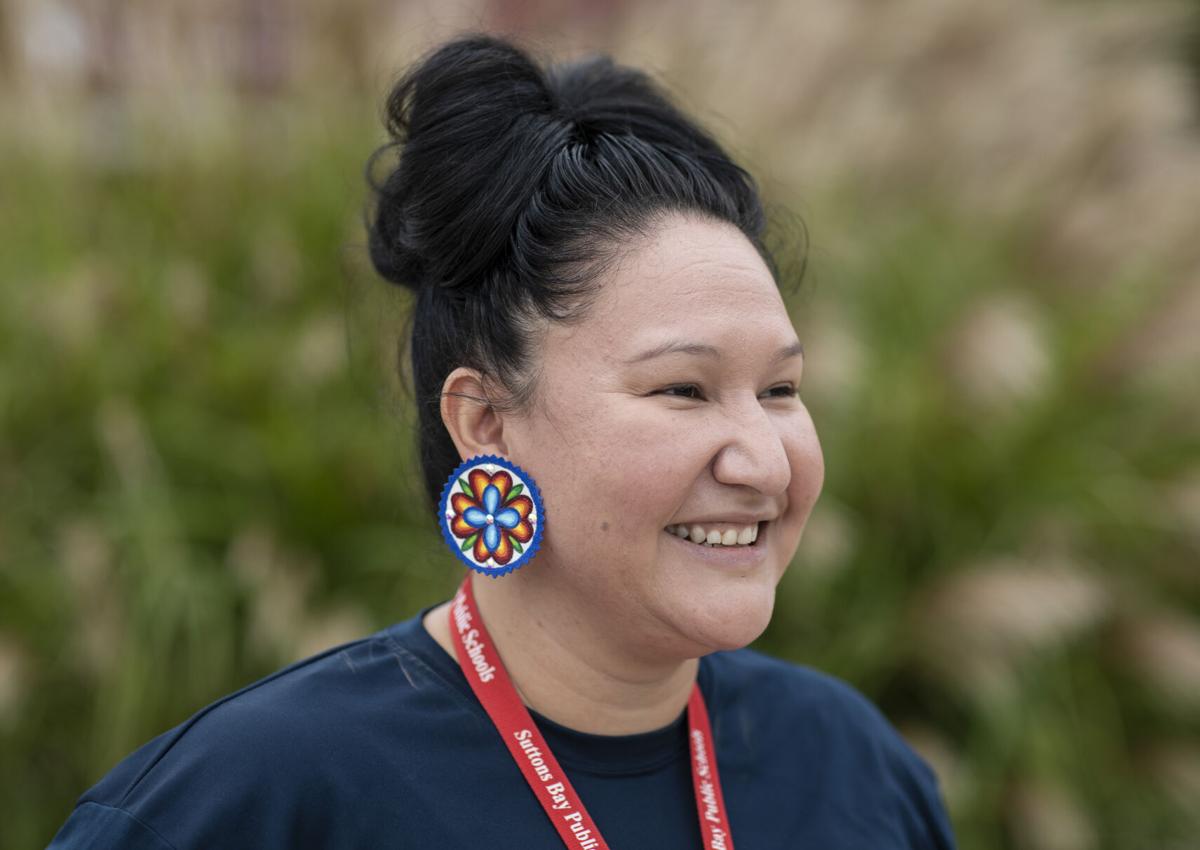 Samantha TwoCrow poses for a portrait outside Suttons Bay High School in Suttons Bay on Friday. TwoCrow is the director of the Suttons Bay Indigenous Education Program 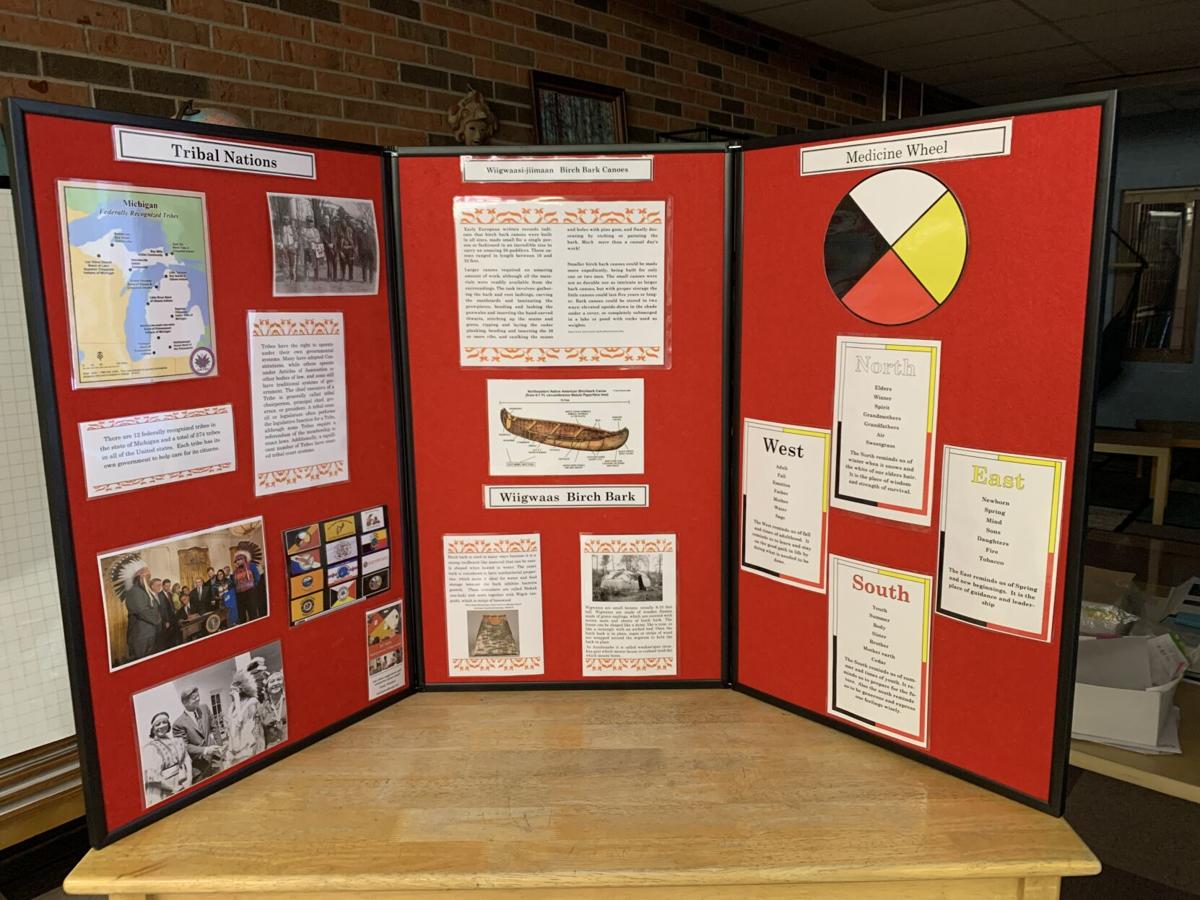 Samantha TwoCrow poses for a portrait outside Suttons Bay High School in Suttons Bay on Friday. TwoCrow is the director of the Suttons Bay Indigenous Education Program

“There’s so much that we have erased from our history, as though natives were just an inconvenience,” Morton said.

“We have so much really positive and meaningful teachings that are available for all students, not just Native American students,” said Director of Suttons Bay Indigenous Education Program Samantha TwoCrow.

There will also be notecards posted all over the high school next week with QR codes learn how to say words in Anishinaabemowin and English, TwoCrow said.

“This is just an opportunity to share a piece of who we are,” TwoCrow said. “And to be given that opportunity within your school district is pretty awesome.”

There will also be a Medicine Wheel, which teaches “how to represent all walks of life and all people of color,” passed between teachers and classes on Monday, TwoCrow said. The Medicine Wheel is a good resource to “build community partnerships.”

On Wednesday, Suttons Bay middle schoolers are also going to the Dennos Museum Center to see an exhibit with Native American artwork, as an extension of the Indigenous Peoples’ Day celebration.

“A lot of our families experience a lot of intergenerational trauma or historical trauma that results from just all the past history, but encouraging and hearing both sides is significantly important to the healing of all Native American people and Indigenous people,” TwoCrow said. “But when you’re celebrating just one side of it, you’re not giving the opportunity to acknowledge the first people that originated from this land here from the very beginning.”

In Traverse City Area Public Schools, Indigenous Education Program managers Amber Ochoa and Cindy Winslow will be visiting a few schools to provide learning resources to teachers and giving interactive assemblies to small groups of students to teach about local Indigenous tribes on Monday. TCAPS teachers will also be teaching about local tribes’ histories and cultures on Monday.

The TCAPS Indigenous Education Program provides academic and cultural support to Indigenous students. Ochoa, the program manager, and Winslow, the cultural manager, both work with TCAPS schools to provide support and resources to Native American students.

Through a grant from the Northern American Heritage Fund, the TCAPS Indigenous Education Program has been able to create travelling exhibits that teach about indigenous culture though a historical, cultural and material approach. Winslow, who formerly worked at Eyaawing Museum and Cultural center, takes the exhibits to a different school each week. The exhibits’ contents change focus each month.

TCAPS Executive Director of Communications Ginger Smith said that, in TCAPS, the schools are starting to teach about Indigenous Peoples’ Day with more of an emotional connection to the tribe, as it is a significant part of the community’s history.

School Indigenous Peoples’ Day celebrations are also happening at the higher education level. At Northwestern Michigan College, the Dennos Museum Center — which has two exhibits focused on Indigenous history — is offering free admission on Monday and an outdoor event from 2-4 p.m.. It is organized by Todd Parker, the Native American success coach and members of NMC’s Native American Student Organization.

The Grand Traverse Band of Ottawa and Chippewa helped fund the event.

NMC’s event includes an outdoor drum and dance performance as well as singing by the Nishinabe Singers. During the drumming and dancing, the names of the dances will be called out.

“I think the takeaway is going to be that — well I hope it’s going to be — that the native people within this region have a lot to offer and are a very vibrant and thriving culture,” Parker said. “And I think that due to mainstream media that’s not been portrayed as such for a very long time and I think that the longer that we hold events on Indigenous Peoples Day and include everyone, we’re going to educate everyone about those pluses and highlight the differences and the similarities for everyone, and bring people together so that they can exchange ideas in a safe and comfortable environment.”