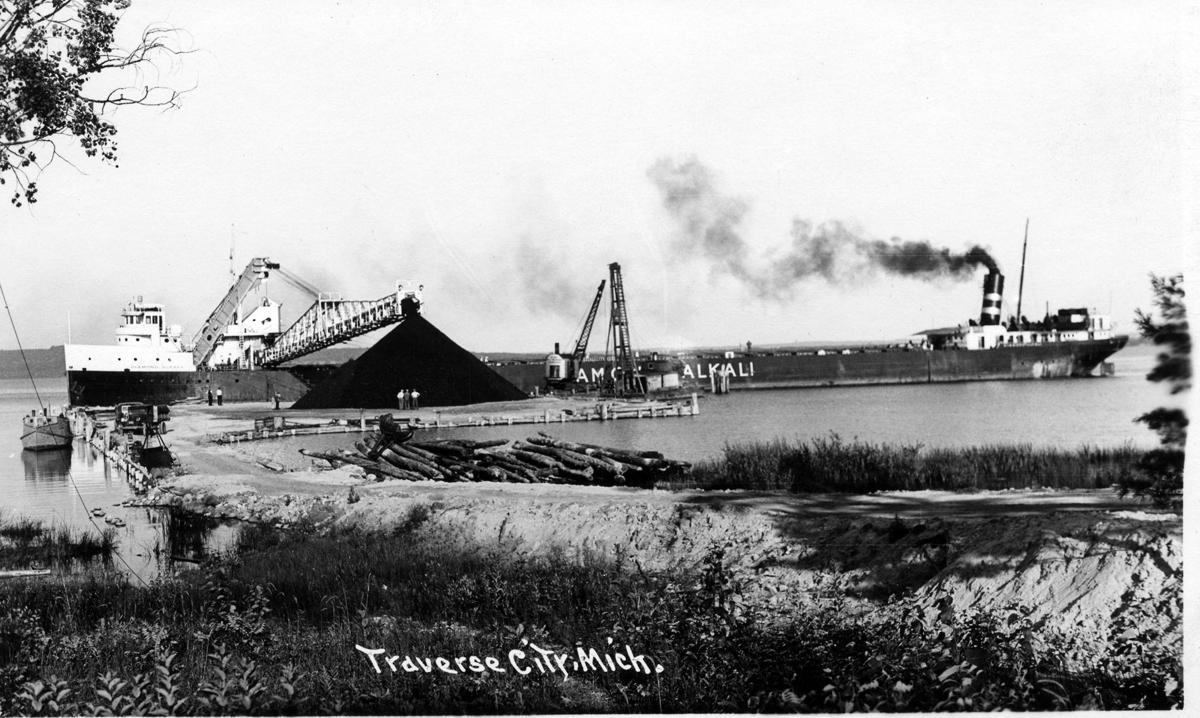 Postcard ca 1930's showing Diamond Alkali unloading coal at the Greilickville Coal Dock in West Grand Traverse Bay. This is now the site of the Discovery Center – Great Lakes. Rotary bought the coal dock from the city in 2016. 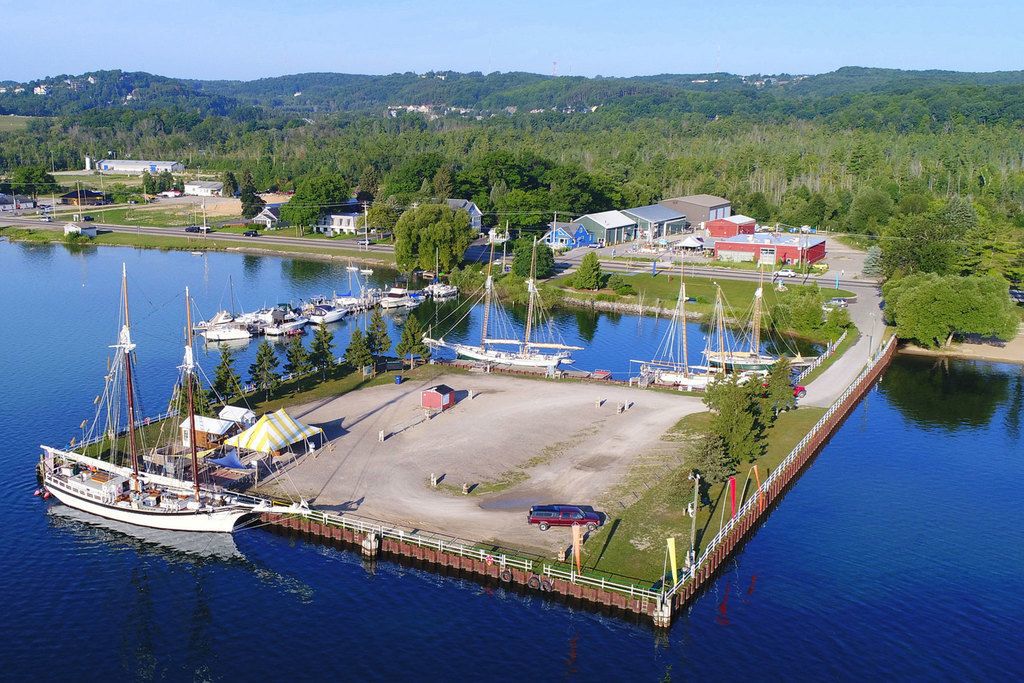 The former Traverse City coal dock on West Bay. Now owned by Rotary Charities, plans are underway to transform this area into a community harbor and port. 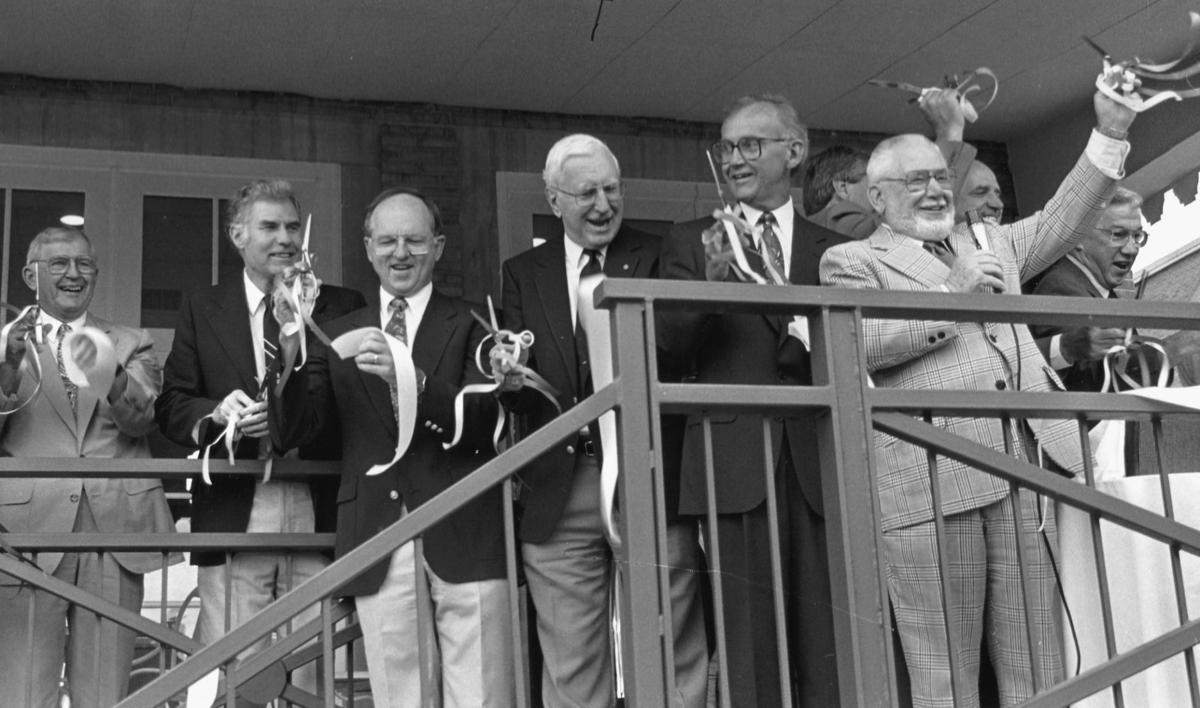 Participants celebrate the 1991 reopening of the Park Place Hotel, after extensive renovations under the management of Rotary Charities.

Postcard ca 1930's showing Diamond Alkali unloading coal at the Greilickville Coal Dock in West Grand Traverse Bay. This is now the site of the Discovery Center – Great Lakes. Rotary bought the coal dock from the city in 2016.

The former Traverse City coal dock on West Bay. Now owned by Rotary Charities, plans are underway to transform this area into a community harbor and port.

Participants celebrate the 1991 reopening of the Park Place Hotel, after extensive renovations under the management of Rotary Charities.

In 1975 that shout may well have rung through the forest near Spider Lake.

Total Petroleum workers, drilling on land belonging to the Traverse City Rotary Club, had struck black gold. As it turned out, so had all of northern Michigan.

Think of the many ways Rotary might have used this financial windfall.

In 1976 the club chose to form an independent nonprofit, Rotary Charities. It was charged with using the money in ways that honored the club’s motto: “Service before Self.”

Rotary Charities is separate from, but works with, the Rotary Club. Club membership elects Charities’ Board members from within its own ranks, thus ensuring accountability to the club. This allows the club to continue its own work in the community, while enabling Charities to focus on its philanthropic activities.

As of 2020 that philanthropy totals over $60 million used to better communities throughout the region.Support ranges from brick and mortar projects, to building the capacity of numerous social sector organizations, to balancing growth while preserving natural resources, and to leadership development.

Today Rotary continues to exhibit its own leadership capabilities, even during a global pandemic.

By early April it offered the community a COVID-19 Crisis Support Team, and resources for adapting to this “new normal.”

“The pandemic is a tragedy, but it is here. And COVID-19 has revealed inequities that have caused some citizens to suffer more than others. Realizing this, COVID-19 can lead us to collaborate and redesign the systems that have led to that unbalanced world. Twenty-twenty can become a positive pivotal point, balanced around a tragic moment in time,” said Becky Ewing, Rotary Charities Executive Director.

“The true legacy of Rotary has been this type of leadership. Consistent, strong, and principled. Over the years that leadership has evolved in response to emerging opportunities and community needs,” said former Rotary Charities Executive Director Marsha Smith.

Wise leadership was evidenced decades ago by the Rotarians who negotiated the land lease with Total Petroleum. That lease guaranteed Rotary with an astounding 25 percent of royalties until production costs were met, and 40 percent thereafter.

Those figures are the source of Rotary’s financial windfall.

Long-time Rotary Member Pete Strom recalled philanthropic pioneer Eugene Struckhoff speaking to the club soon after the oil and gas strike. Struckhoff advised them to remember that while it is easy to give money away, giving money away wisely is the tough thing.

Once launched, Rotary Charities succeeded in taking this admonition to heart. They succeeded, in part, by choosing projects only after measuring them against Rotary International’s four way test: Truth, Fairness, Goodwill and Mutual Benefit.

Bricks and mortar projects driven by Rotary include the purchase, renovation and reopening of the Park Place Hotel in the late 1980s and early 1990s. The group was also instrumental in the redevelopment of the State Theatre in the early 2000s, and in the 2016 purchase of the former Greilickville coal dock property from the city, with planning for its transformation into a community harbor and port.

“Since our start by Rotary in 1991, the GTRLC has protected nearly 45,000 acres of land and more than 140 miles of shoreline on our rivers, lakes and streams. I’d say that it’s been an excellent return on Rotary’s initial investment,” said Glen Chown, director of the GTRLC since its inception.“Rotary leadership understood perhaps earlier than anyone else that protecting our outstanding environment, our special land and water assets, is crucial to our quality of life and the strength and sustainability of our economy.”

A year later, in 1992, Rotary Charities incubated the GTRCF — a group that builds endowments and makes community grants through partnerships with donors, nonprofits, and volunteers.

Rotary also focused on strengthening the area’s social fabric, building each family’s ability to lead fulfilling lives. This led to support for organizations like the Women’s Resources Center and Homestretch, and focusing on smart regional growth.

Entry into the 21st century marked a change in Rotary Charities’ thinking.

“We stopped focusing as much on traditional charitable giving and pivoted to something called transformational funding. The idea is to help existing organizations become stronger. To give people the tools they need to be collaborative and to understand the systems they are trying to influence. We strive to bring people together in order to solve complex issues. In short, to build leaders who will in turn build more resilient communities,” Ewing said.

“The real value of ‘striking black gold’ was not just the money. The real value and lasting impact was the way a group of ordinary citizens responded to the opportunity and used it not for their personal benefit, but for the benefit of the entire region. I’d like people to feel motivated to do the same; think beyond themselves, think about the good of the whole and act in accordance with kindness,” Smith said.