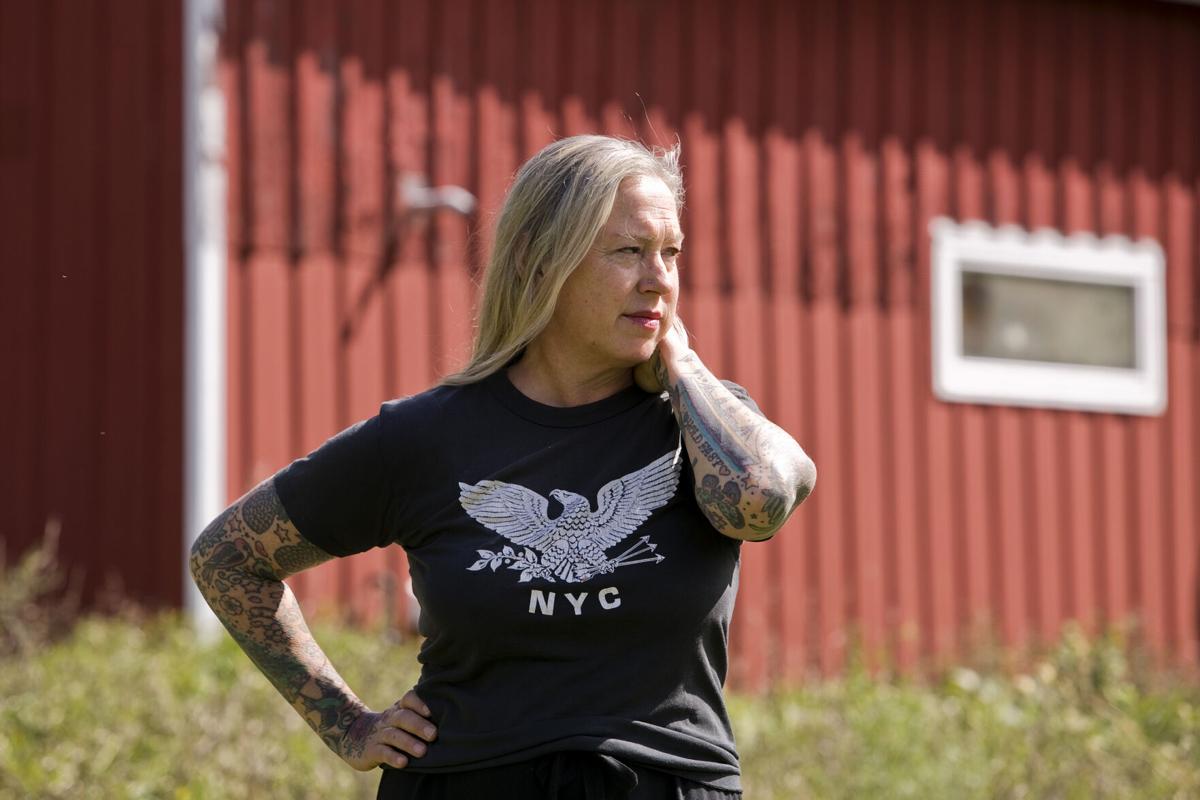 Sue Kurta was living in Jersey City and working in Manhattan on September 11, 2001. She moved to her farm near Kingsley in 2010. 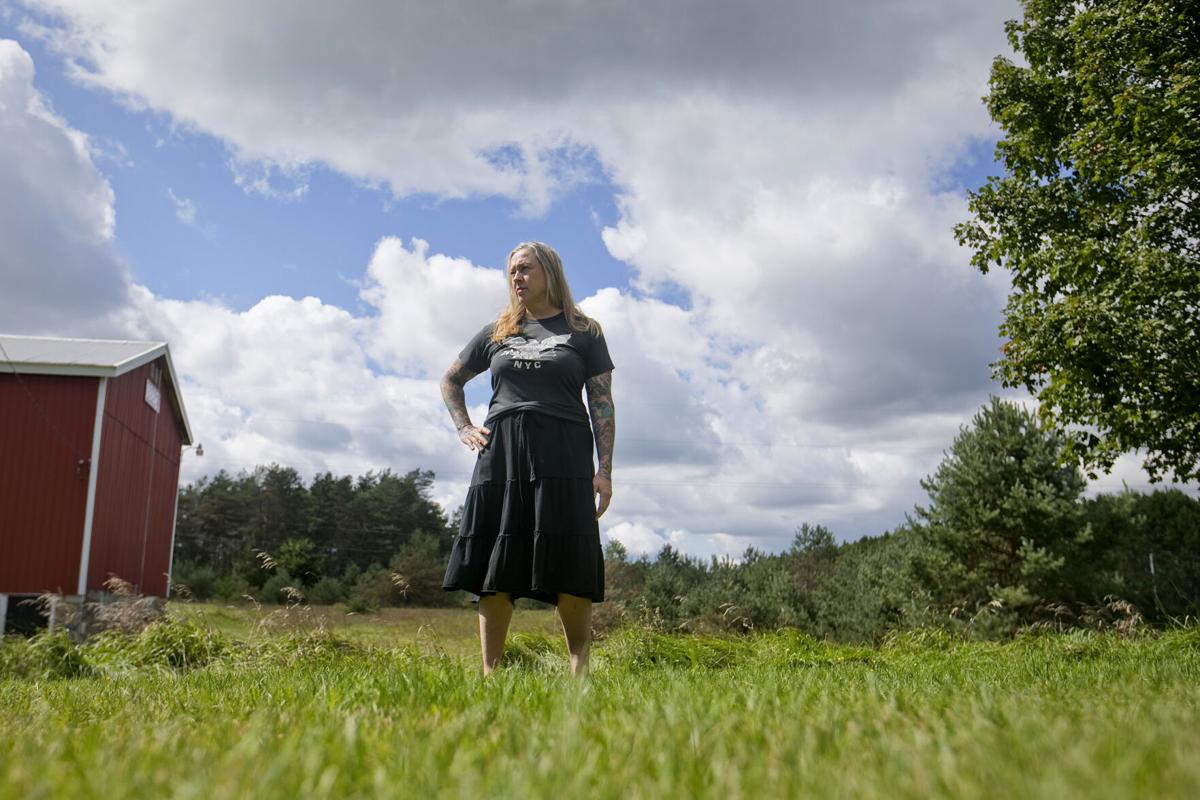 Sue Kurta stands outside on her farm near Kinglsey. Kurta was working in her Manhattan office on September 11, 2001. 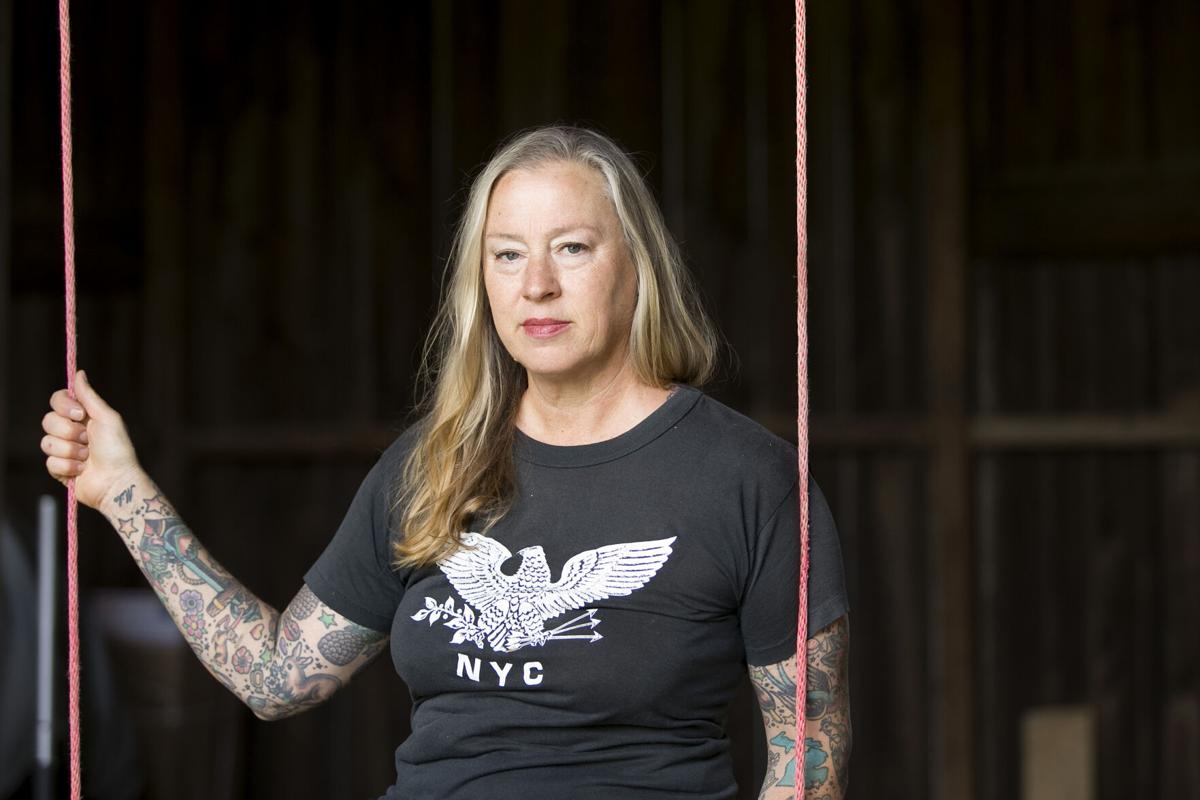 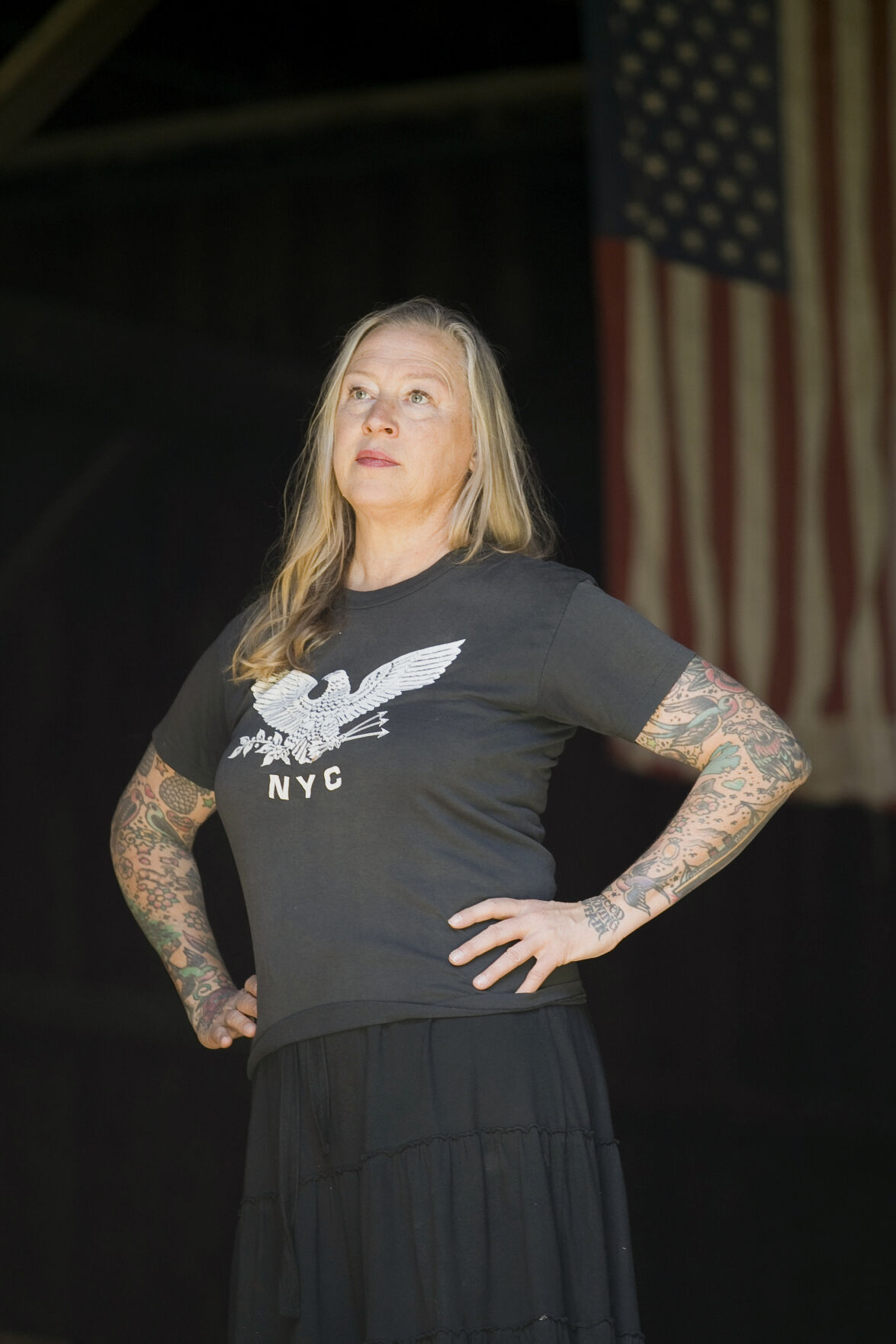 Sue Kurta was working in her Manhattan office on September 11, 2001, and watched one of the towers collapse from a boat crossing the Hudson River as she left the island following the attack. 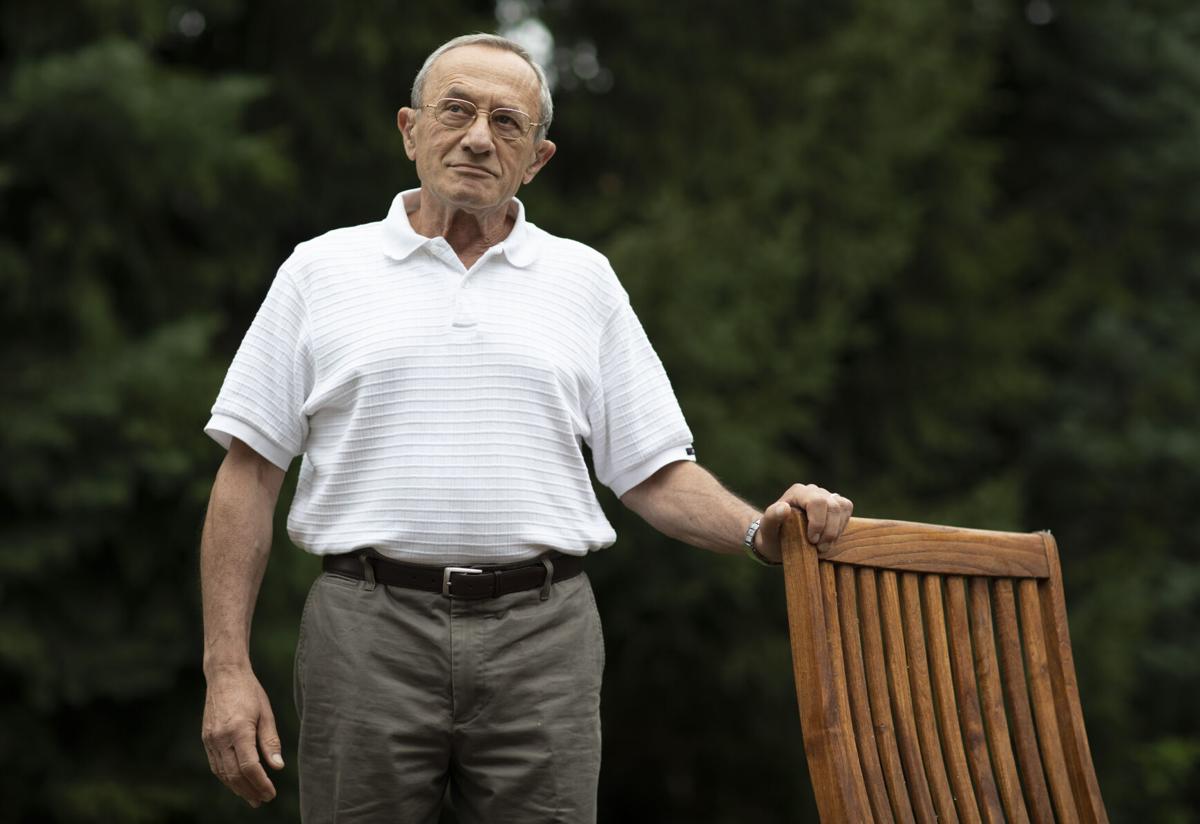 Jack Segal poses for a portrait at his Traverse City home.

Sue Kurta was living in Jersey City and working in Manhattan on September 11, 2001. She moved to her farm near Kingsley in 2010.

Sue Kurta stands outside on her farm near Kinglsey. Kurta was working in her Manhattan office on September 11, 2001.

Sue Kurta was working in her Manhattan office on September 11, 2001, and watched one of the towers collapse from a boat crossing the Hudson River as she left the island following the attack.

Jack Segal poses for a portrait at his Traverse City home.

TRAVERSE CITY — Sept. 11, 2001 marked a turning point for many. The date itself is a historical line in the sand, a place of before and after. Today, 20 years after the Sept. 11, 2001 attacks, we spoke to several community members connected to the event about how it impacted their lives.

A call to duty

TRAVERSE CITY — For some, the attacks created a small turn on the path of service they already walked. For others, it was a call to duty.

That service and duty came at a sacrifice.

Cindy Schwartz-Walters and Rick Hansen each had a son — Matthew Schwartz and Justin Hansen — die in combat during the United States’ War in Afghanistan, the country’s longest war spurred by the terrorist attack on New York City and Washington, D.C.

Schwartz-Walters and Hansen reflected on that autumn Tuesday, one seared into the memories of so many who lived to see that day.

All of the patients at Munson Medical Center had the news coverage on their TVs. Schwartz-Walters caught a glimpse of the screens as she walked down the hallway, her attention and gaze focused on the smoke billowing from the towers. She ducked into an empty room, Room 20, and stared out the window.

Schwartz-Walters wasn’t able to call her son until after work. When she did, he wasn’t there. Schwartz, who enlisted in the U.S. Air Force in 1999, was in briefings, being told what his mother already knew was true.

“When he was telling me he was going over there, it seemed surreal,” Schwartz-Walters said. “I was numb.”

Schwartz was killed by a roadside bomb on Jan. 5, 2012, just shy of his 35th birthday. He was in his sixth tour of duty and working as an explosive ordnance disposal specialist, a role made famous by the Academy Award-winning film “The Hurt Locker.” Schwartz worried about his mother and told her to never watch the movie. He also told her not to worry while he was over there.

Like all good moms, Schwartz-Walters worried despite her son’s protests. She might have watched “The Hurt Locker” as well, she admitted.

But now, Schwartz-Walters doesn’t have to worry about her son.

“I know where he’s at,” Schwartz-Walters said. “He’s in heaven, and God has him.”

Hansen knows where his son is, too.

Justin enlisted in the U.S. Marine Corps in June 2005. Hansen remembers the first time his son showed an inclination toward joining the military. During the Battle of Fallujah, Justin heard the father of a dead soldier interviewed on the radio. He took the father’s grief as motivation.

“He says, ‘Dad, I can’t let my peers go over there and fight for my freedom by themselves. I have to go fight with them.’ That was coming from a 19-year-old kid,” Hansen said. “That’s a man who was mature beyond his years.”

Justin was killed during combat operations in the Bagdhis province of Afghanistan, just seven months after Schwartz died. Hansen said he’s gone through 10 years of bitterness since his son’s death.

Now that the United States military has been withdrawn from Afghanistan, he worries about the possibility of another attack in the same vein as 9/11. Hansen said the country just is not as safe as it was just weeks ago now that the Taliban has retaken control of the country his son died defending from the terrorist organization.

“Could be worse, maybe,” Hansen said of a future attack. “They just got our attention with that one.”

‘A giant plume of swirling black’

KINGSLEY — Sue Kurta won’t look at her file of clippings from 9/11, she won’t watch any replays of two planes hitting the twin towers or any of the documentaries about that infamous day.

It has been 20 years, but Kurta cries when she talks about the terrorist strike and its aftermath. She still finds it unthinkable. She feels unresolved grief and keeps her feelings about that day closed up in a box because she doesn’t understand it.

“I am a stable person, but I will never get my head around that people are capable of that,” Kurta said. “I don’t understand it. I’ll never understand people with that much hate.”

Kurta, now a cheesemaker and the owner of Boss Mouse Cheese in Kingsley, was working on the 53rd floor of her Manhattan office building just a few miles from the World Trade Center when the first plane hit. She didn’t see the impact, but saw the gash it left. She and others thought a pilot had had a heart attack.

She remembers what kind of day it was before 8:45 a.m.

“It was a beautiful day. It was cool and fall and bright and just a crispy, lovely day.”

Eighteen minutes later, when the second plane hit, they knew it wasn’t an accident. Kurta was sent home and when she got down to the street the view of lower Manhattan was overwhelming.

“It was just this giant plume of swirling black,” Kurta said. “The whole of Manhattan was just a black tornado. Everything just ground to a halt because nobody knew what was going on.”

The internet went dead, cell phones went dead, the subway was shut down and buses were running partial routes, she said. People sat in their cars listening to the radio. For weeks afterward a wet smoky smell hung over the city.

“We all didn’t know what was happening,” she said. “It was really chaos. Everybody was really scared.”

She walked most of the 8 miles to her home in Jersey City. She was shell shocked. She left her comfortable shoes at the office and her feet hurt as they blistered up.

She took a boat across the Hudson River, where water taxis, the Staten Island Ferry and the U.S. Coast Guard were all working to get people out of Manhattan, she said.

“When I was on that boat there were a couple of people just covered in white ash,” said Kurta, who watched one of the towers collapse during that ride.

Once home she watched TV all night. For a couple of weeks she would play the scenes over and over again on YouTube for hours at a time.

She visited the 9/11 Memorial & Museum at the site of the former twin towers and barely got through it. She knows she’s not unique, that millions of people go through the same thing.

“I can’t believe they got away with it. They did this and it worked.”

Kurta, 56, says 9/11 is a landmark in the timeline of her life. Every year on the anniversary of that day she has what she calls a post traumatic stress disorder reaction.

“It’s right there on the surface of my emotions,” she said.

When Jack Segal found out about the Sept. 11, 2001, attacks, he was working as the chief of a political advisory group for NATO’s command in the Netherlands.

His executive assistant told him about the first plane hitting the World Trade Center, then the second. Their work for the day went on the back burner, and so too did Segal’s task at the time: talking to leaders of countries that wanted to join NATO.

The attacks came up that day at a meeting with the military commanders in charge, Segal said.

“We were talking about a different subject but when that hit the table that morning, we all knew immediately we would be involved,” he said. “We didn’t know exactly what would happen next.”

The organization would eventually take over security for Afghanistan, one region at a time starting with the city of Kabul, taking full control of security and military training in 2006, Segal said. His time working in the country ended in 2010, although he stayed in touch with people who remained.

On the 20th anniversary of the attacks, the Taliban have retaken control of the country the U.S. and other NATO allies invaded following the attacks. It’s a sad thing to see people struggle to escape, and for his small role in the decision-making there, he feels guilty for mistakes made, including not being able to establish a lasting government.

That’s not to mention hundreds of thousands of Afghans and many hundreds of allied forces who died, Segal said.

“That’s something I can’t ever repair, but we hopefully will learn from these mistakes.”

Segal agreed the U.S. needs to rethink its foreign interventions, but elected leaders are often pressed to react to ongoing events, and their advisors seldom can offer “do nothing” for options.

Isolation isn’t the answer, either, Segal said. It’s been tried before and at times comes back to “bite,” including in Afghanistan.

While it was inevitable that the U.S. would respond to the Sept. 11, 2001, attacks, Segal said there were several points when the U.S. could’ve withdrawn, shortly after Afghanistan’s 2004 election being one.

Instead, mistakes like training an army reliant on sophisticated equipment and the contractors that fixed it left Afghanistan without the defensive capabilities to stop the Taliban’s return to power, Segal said.

It was another example of a conventional army struggling to fight against an unconventional enemy, he agreed. That’s a lesson he hoped the U.S. had learned from Vietnam, a war in which he served two tours.

Leaders need to understand the history of a place before becoming involved there, and Afghanistan has a long and war-torn one, Segal said.

“If you’re not smart about a place and you don’t know the history, then you really need to question yourself very deeply about whether we belong there, whether our forces need to be sent there, because the troops won’t be able to figure it out if they are put into a situation they don’t understand.”