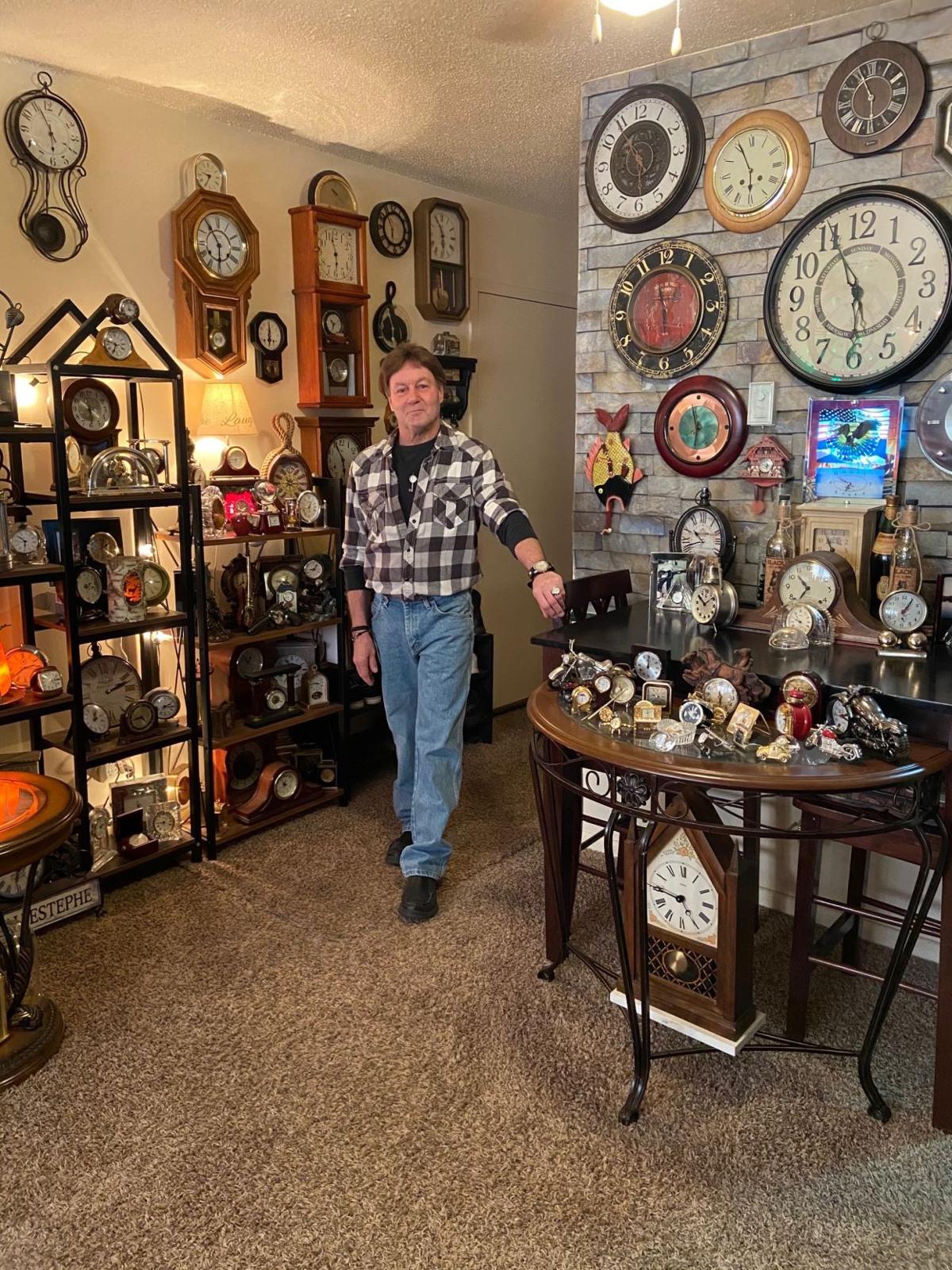 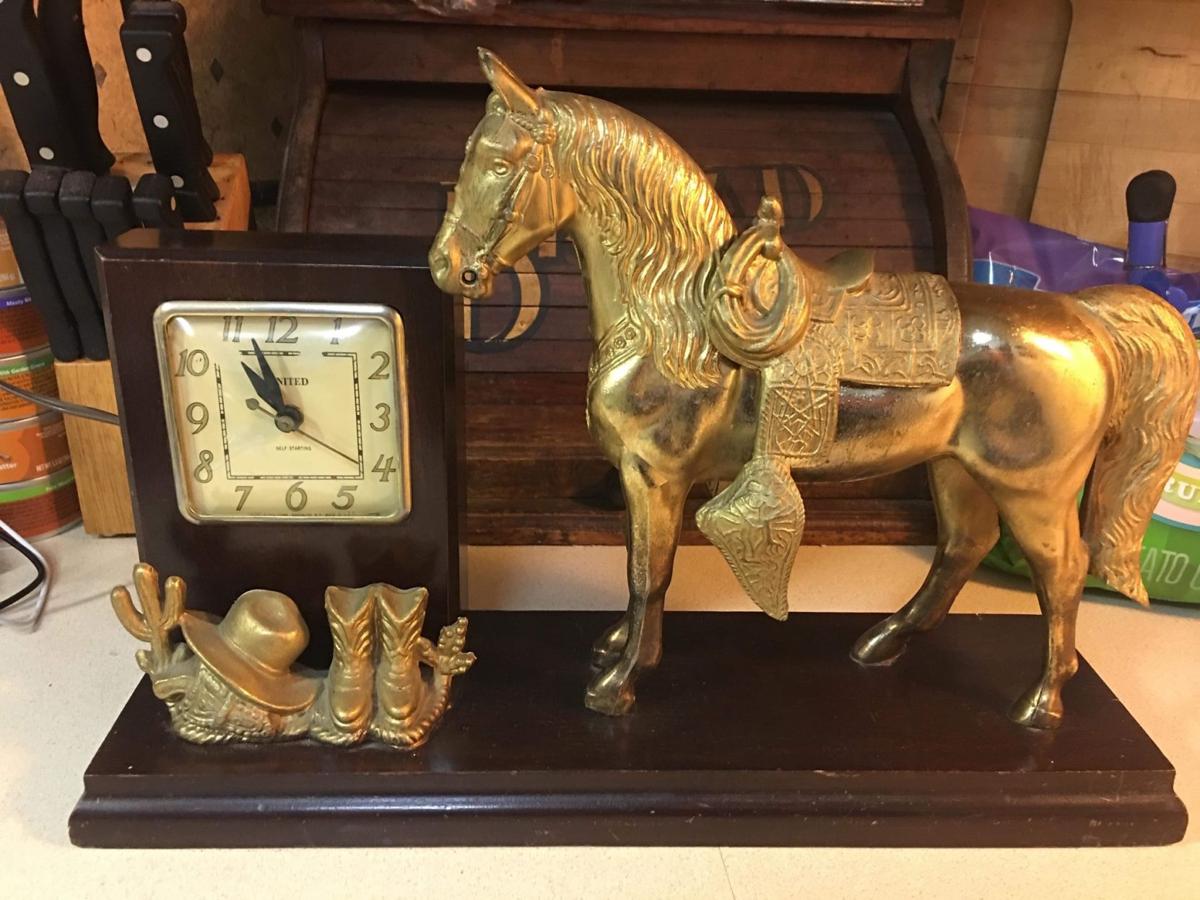 Joe Battaglia fills his three-bedroom apartment with a variety of clocks, most from local thrift stores and consignment shops.

Joe Battaglia fills his three-bedroom apartment with a variety of clocks, most from local thrift stores and consignment shops.

TRAVERSE CITY — Visitors can hear faint ticking sounds outside Joe Battaglia’s Traverse City residence. Clocks of all shapes and sizes line the shelves and hang on the walls of his living room.

“The grandkids come over, and they like to count,” Battaglia said. “The kids were worried about some sort of intervention, but they learned to love it. I do a pretty good job keeping everything tidy and off to the side.”

Battaglia said he previously gathered hundreds of rock band albums, but the timepieces are taking over now. He said he is not sure how he decided to collect — only that once he started, he could not stop.

Though he is less than a year into his pastime, he estimated his three-bedroom apartment is home to more than 300 clocks.

“Each room has its own theme,” Battaglia explained. “I threw it all together. I’m pretty proud of it.”

One room features patriotic decor: American flags; red, white and blue colors; and, of course, related clocks. Behind the second bedroom door is a fishing vibe, while the main room harbors a sailing or water theme.

He said he usually spends 12 hours per weekday as a maintenance technician for his apartment complex, where he found a few clocks discarded in the dumpsters. He made the rounds at area thrift stores and consignment shops on weekends when they were open, looking for something different.

“I came home with two to 10 clocks every Saturday,” he said. “Some I get online through Goodwill auctions. So many people have sent me clocks.”

He said many pieces — like the table with a clock built into the middle — he has never seen before.

His favorites include the globe, horse and pirate ship clocks. He said girls tend to like the horses too, with guys preferring the ATV and car motifs.

A large grandfather clock sits in one corner of the living room. Battaglia said he bought it for about $25 and then cleaned it for display. A smaller version rests at the end of the hallway.

Battaglia said his most expensive piece cost $100. He estimates his total investment at about $2,000 so far — including batteries and shelves. Recently, he started selling some clocks through Facebook, posting photos of the ones he does not have space for or does not want anymore and to make room for more, he said.

“Before I was buying anything,” he said. “I’m more selective now. If I find something I like better, something else has got to go. Everything is subject to change.”

Some feature pendulums and many sound out the hour. Battaglia said he and his cat are used to the noise now, especially since the clocks chime at different times rather than simultaneously. He said there are too many to keep them all in sync.

“Midnight and noon is quite the fiesta over here,” Battaglia said. “But I learned to like it.”

Michele Rowley, of Westland, Michigan, said it is a unique collection.

“They are quite unusual, but also magnificent creations of art,” Rowley said. “Joe is passionate about his collection.”

Rowley met Joe and his sister Jackie in third grade. She said they lost contact for a while when they moved apart, but were able to reconnect through social media almost 30 years later.

“He also likes to share pictures on Facebook with his friends and family,” she said of his collection. “It seems to bring much conversation and enjoyment to many people.”

Battaglia said he plans to keep collecting clocks and learning as much as he can about when and where they were made. Most of his are from China or Japan with a few manufactured in the U.S. One of his oldest dates to the 1940s.

“The grandkids come over, and they like to count. The kids were worried about some sort of intervention, but they learned to love it. I do a pretty good job keeping everything tidy and off to the side.” Joe Battaglia, Traverse City