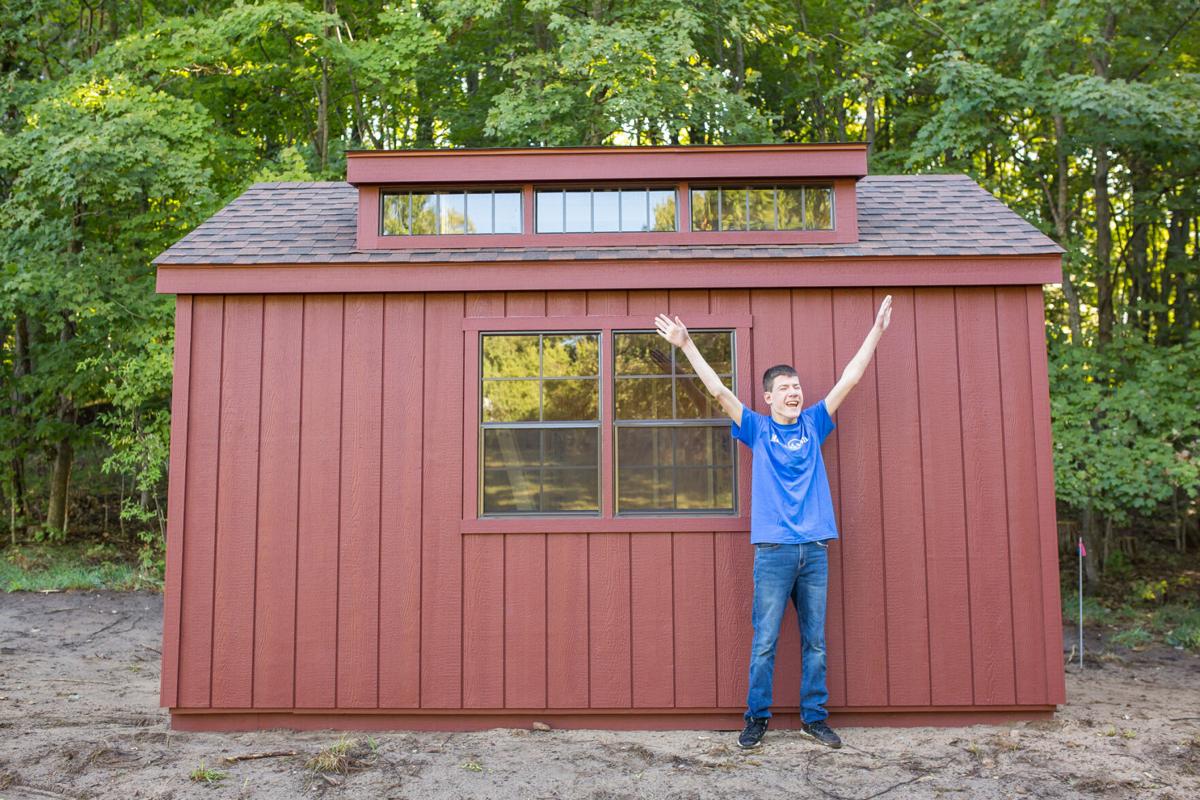 Levi Holmes, age 16, stands outside his outdoor shed in Alden. The shed, which created a space for Levi to hang out in, was his request granted by Make-A-Wish Michigan. 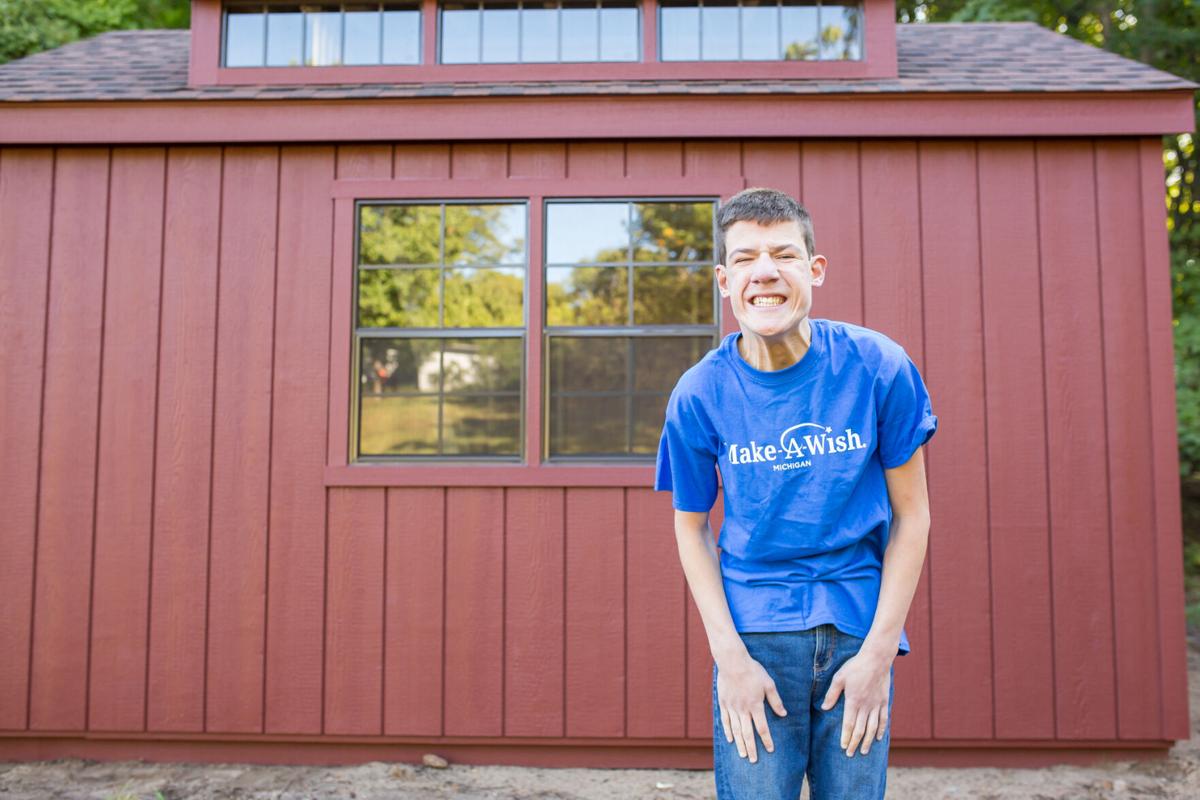 Levi Holmes, age 16, stands outside his outdoor shed in Alden. “I like to play in there,” Holmes said of his granted request from Make-A-Wish Michigan. 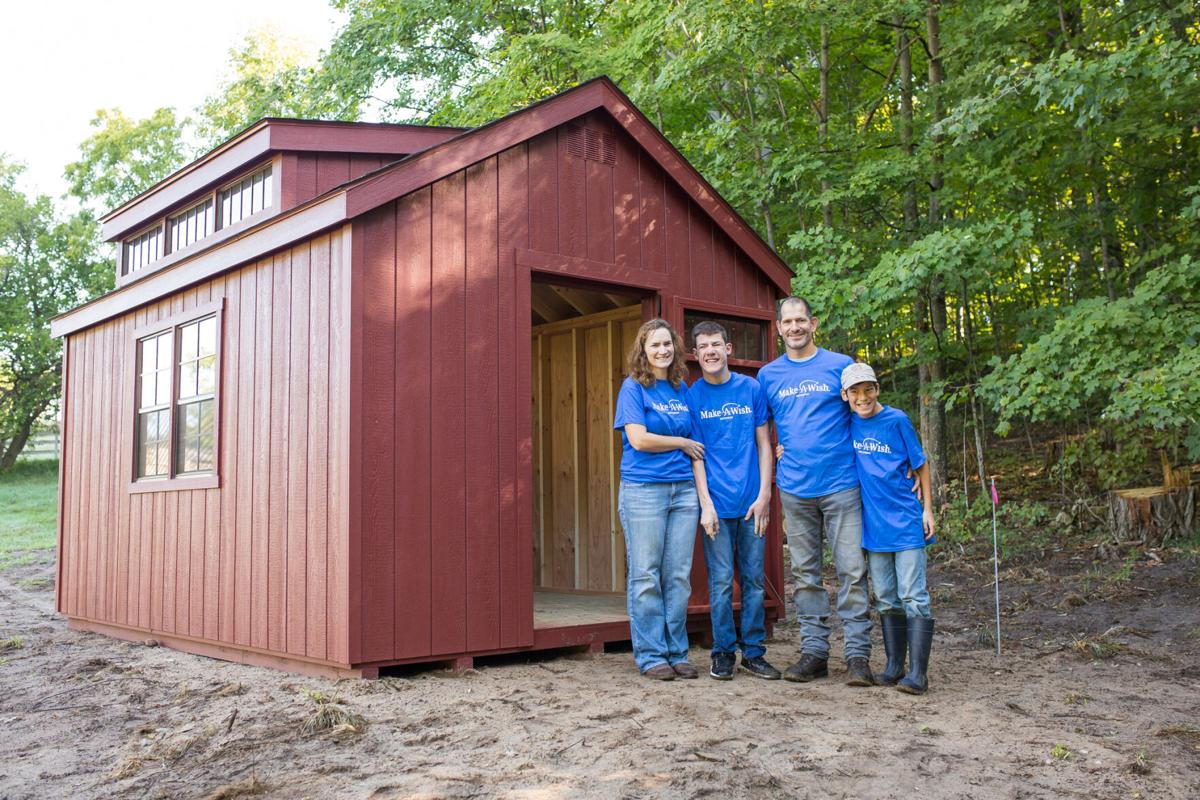 Levi Holmes, age 16, stands outside his outdoor shed in Alden. The shed, which created a space for Levi to hang out in, was his request granted by Make-A-Wish Michigan.

Levi Holmes, age 16, stands outside his outdoor shed in Alden. “I like to play in there,” Holmes said of his granted request from Make-A-Wish Michigan.

ALDEN — Levi Holmes received his wish one day this fall.

His parents have already had their wish granted more than 6,000 days.

Born without a pulmonary artery and valves and with one of his kidneys, Holmes keeps overcoming every obstacle of his past and whatever odds are placed on his future.

A child born with less than a 50-50 chance of survival who was once on a last-chance heart surgical procedure, has long since fulfilled the wishes of Dr. Jeremy and Sarah Holmes by simply being here and simply being Levi.

“Levi is a miracle to be alive many times over,” Sarah Holmes said of her son, who was born with DiGeorge Syndrome, which can lead to 183 different birth defects.

“I give all the glory to God,” added Jeremy Holmes, the chief medical officer at Kalkaska Memorial Health Center. “Levi should definitely not be here right now.”

So when the young man, who turns 17 years old 10 days before Christmas, wanted something small, it was a very big deal.

It took a short amount of time for Levi Holmes to come up with something he wanted when his wish was granted.

Since a previous hang-out remained when Levi and his family moved to Alden, his request to Make-A-Wish Michigan was for an outdoor shed. Some place for the young man to hang out, some place for him to play his ukulele. A place for Levi.

“Mom and dad said at his former house he had a shed he would hang out in,” Make-A-Wish Michigan Communications and Public Relations Manager Christy Schulte recalled. “He had really been missing that. When we granted his wish and we asked him what he wanted, this came to his mind almost immediately.”

Schulte was on hand when Make-A-Wish made an Antrim County delivery from Jim’s Amish Sheds in St. Johns.

“He was so excited,” Schulte said of that September day. “Then when he went inside, his eyes got so big. He immediately crawled up to the loft to check it out.”

Then he asked his parents if he could bring some things, scurried to the house and returned with a wagon full of items.

“He moved in, so to speak,” Schulte said.

Born Dec. 15, 2003, Levi said he likes his own place, even though he would like it to have a spiral staircase to replace the ladder and a sink “to wash my hands.”

“Yes I do,” said Levi, who is also eagerly awaiting heat and lights in the shed. “I like to play in there.”

Measuring large and changing doctors, Sarah Holmes received an ultrasound at the start of her last trimester that showed some issues.

But 21-year-old brother, Wilson — who came a year after eldest Adelaide was born — also had an unclear ultrasound. The couple thought it was the case again.

But subsequent ultrasounds and a fetal echo cardiogram revealed a handful of issues including the heart defects, the missing kidney and an elongated head. The heart defect led to breathing issues and other physical complications.

“It was borderline for many, many years with Levi,” his mother said.

According to the Immune Deficiency Foundation, about 90 percent of DiGeorge Syndrome patients have a small deletion in chromosome number 22.

According to the foundation, “some patients with DGS have severe cardiac anomalies; some have none at all. Some have major learning disabilities; others have none.”

“It can be severe, it can be mild,” Sarah Holmes said. “Levi has a severe version of the heart defect that is often associated with it.”

There were so many heart surgeries that Levi’s chest cavity was left open for weeks at a time as an infant because of numerous surgical interventions. When he was 1, Levi weighed 10 pounds. Returning home from the National Cherry Festival before he turned 2, Levi suffered cardiac arrest the family fortunately were able to witness.

Trips to town or back often saw the family pull into a hotel or off the side of the road to make sure Levi was breathing. Sarah Holmes said lung problems made Levi look “like he was always running a race” and going back into congestive heart failure when he was a toddler.

Having a medical degree, Dr. Holmes said it has allowed him to better advocate for his son. Given albumin when he was just over a month old to improve his kidney function sent Levi into heart failure.

Hospitalized again at 13 months, Levi was nearly given albumin again in the middle of the night when his father, sleeping in the room, stopped the nurse before it was administered and triggered another heart episode.

“I always felt it was a blessing for me to be a physician and be in this family,” Dr. Holmes said.

Levi and his family once spent a month at a specialized clinic to teach the boy how to eat and he was able to ingest a tablespoon a meal after it.

“It took six years of intense occupational and physical therapy to get him to hold a pencil,” Sarah Holmes said, noting the heart and kidney often worked against each other. “He started kindergarten when he was 10.”

A late growth spurt created some back problems in recent years. He had a recent issue with chest pain before the COVID-19 pandemic and was limited to medical interventions during it.

“He is a very unique case,” Sarah Holmes said. “He just kept on surviving stuff.”

So when he made a little wish for a small outdoor space, Schulte said Make-A-Wish was thrilled to grant it.

“What they’ve has gone through is truly remarkable, which is true with all our Wish kids,” Schulte said of the 100 qualifying medical conditions. “They’ve all had to overcome some adversity. But he’s overcome quite a lot to be where he is today.”

After all, it was something little the Holmes family could do for all the big things Levi has done for them.

“It’s really a faith journey for us,” Sarah Holmes said. “Levi’s life has really changed our hearts. He’s a miracle of love.”

Since Levi was born, the Holmes family has adopted three siblings and is fostering a fourth from the same mother with hopes of adopting. There is also 11-year-old biological brother Lewis.

The lessons Levi taught still resonate with the family.