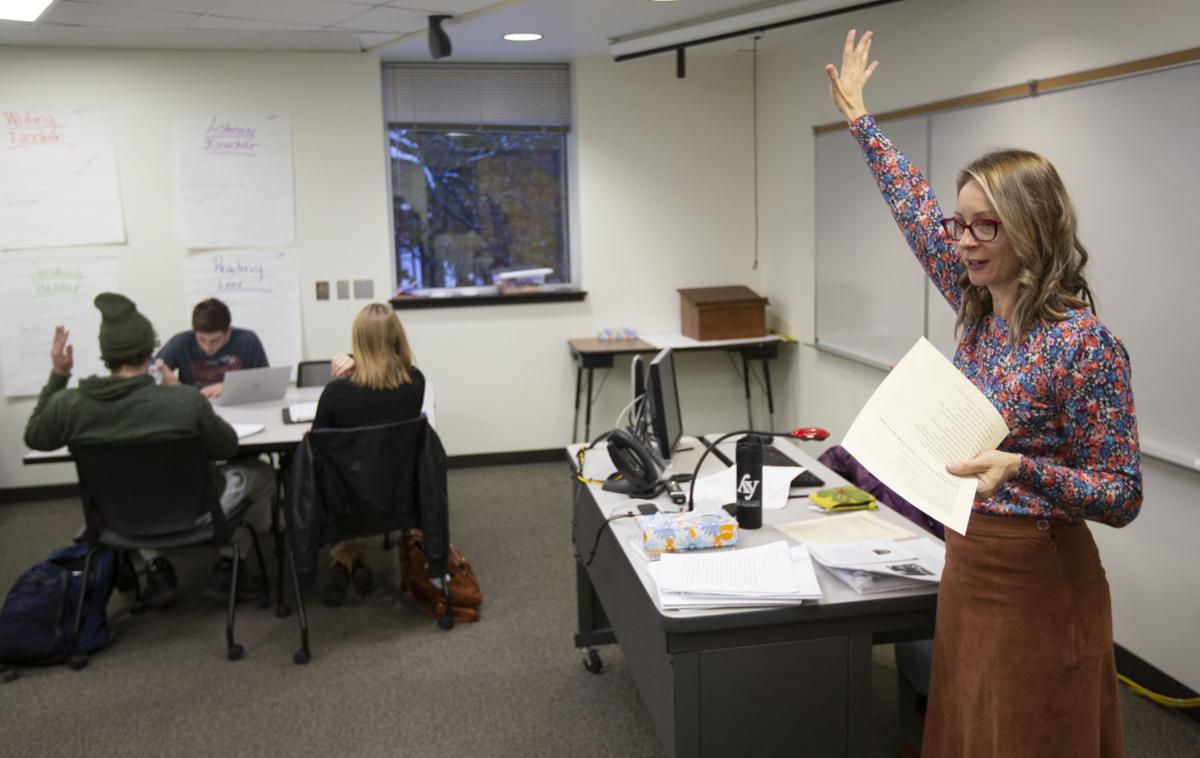 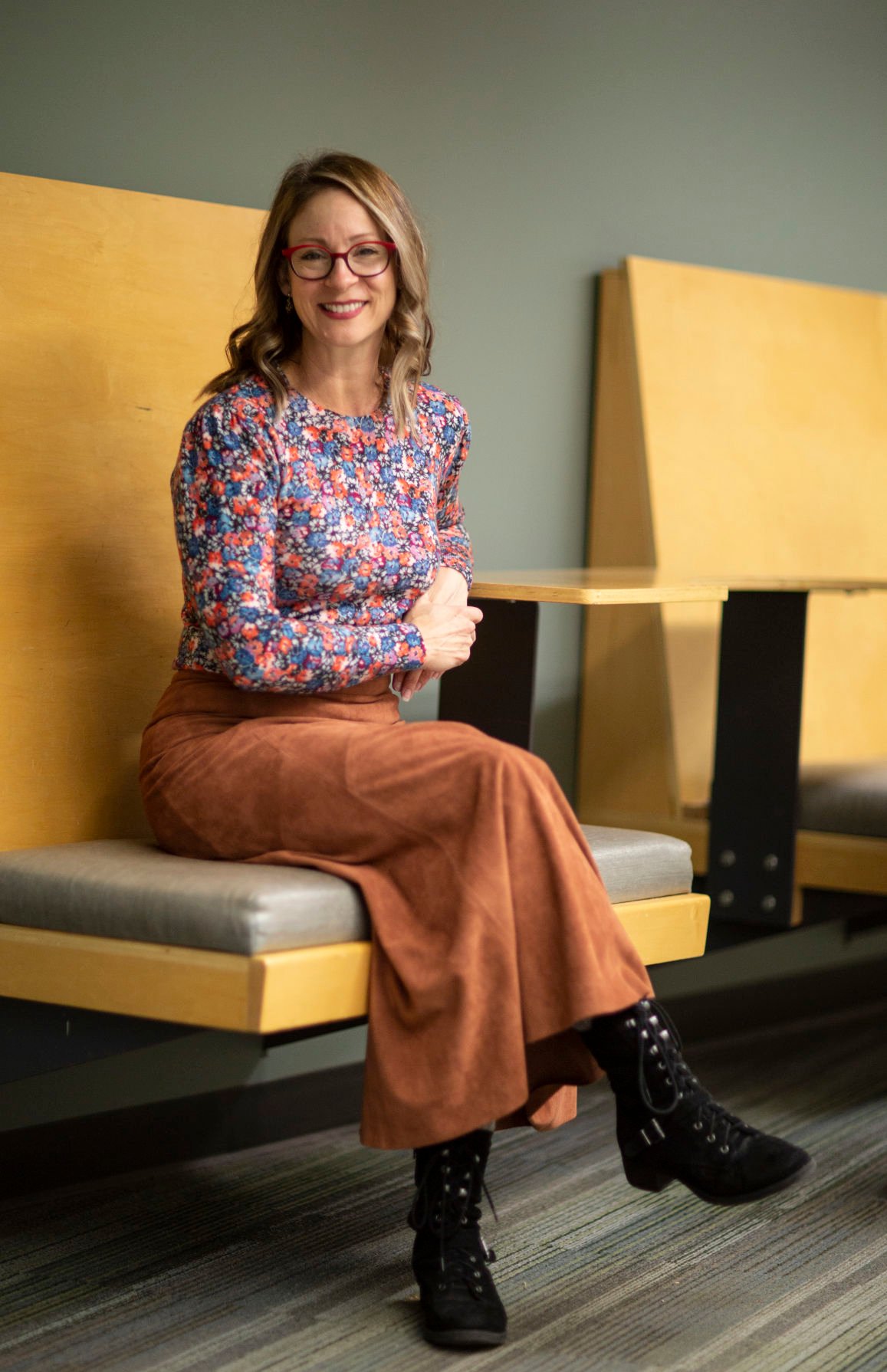 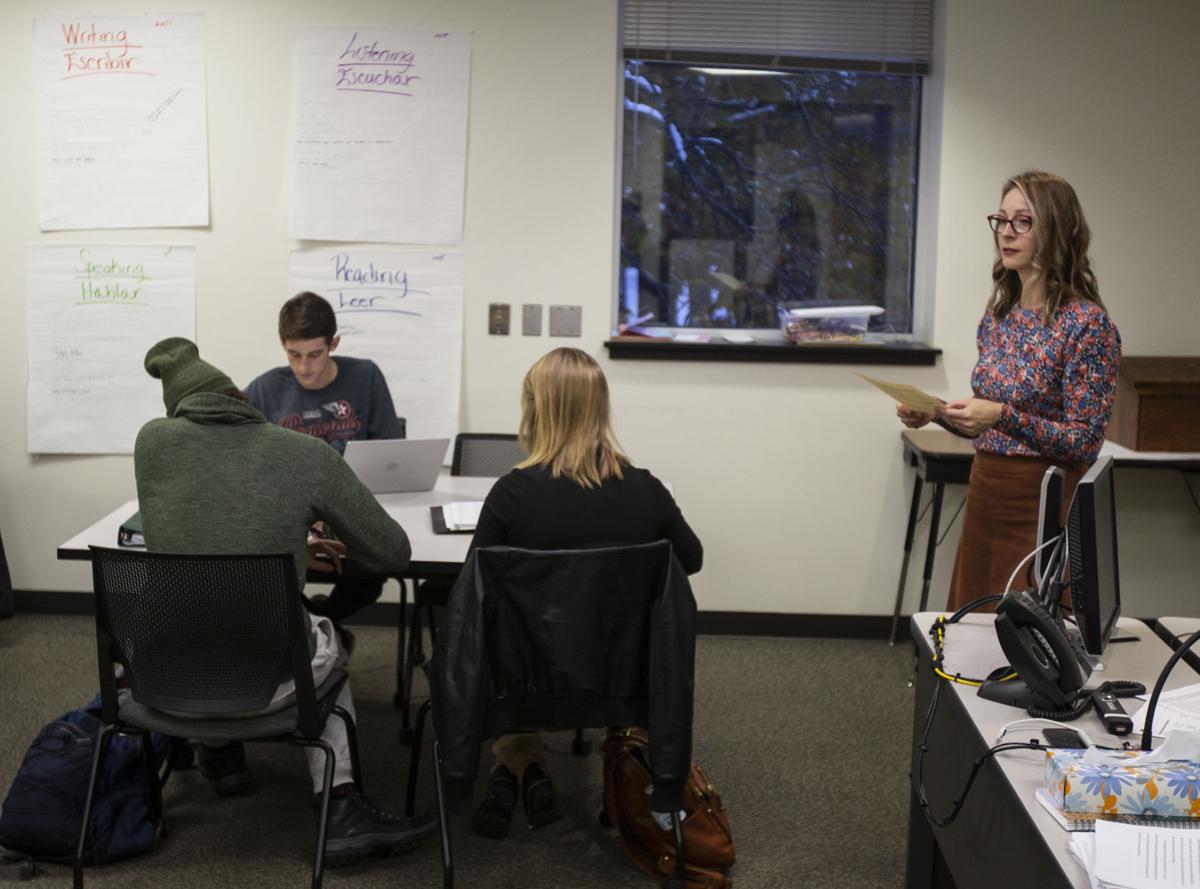 Jen Sperry Steinorth teaches an English composition class at Northwestern Michigan College’s Scholars Hall in Traverse City on Thursday. Steinorth authored “A Wake with Nine Shades,” which features poems that delve into a range of subjects, moods, concepts and stories.

Jen Sperry Steinorth teaches an English composition class at Northwestern Michigan College’s Scholars Hall in Traverse City on Thursday. Steinorth authored “A Wake with Nine Shades,” which features poems that delve into a range of subjects, moods, concepts and stories.

A licensed builder who has designed hundreds of custom homes, Steinorth shifts between two and three dimensions while creating. Her background as a dancer makes each poem’s visual design a deliberate component.

“I think a lot about the eye tracking across the stage as a dancer – you read to the end of a line and then the eye falls off and re-catches on the next line,” she added. “Sometimes that’s to the left, which is traditional, but it doesn’t have to be.”

Before her family relocated to Traverse City when she was a teen, Steinorth trained with the Houston Ballet. After the move, she spent her junior and seniors years of high school as a dance major at Interlochen Center for the Arts. After graduating and joining the Pennsylvania Ballet as an apprentice, an injury sidelined her ballet career at age 19.

Already a writer, Steinorth decided to pursue English academically and earned a degree from Michigan State University. Her creative writing took off over the next few years while teaching visual arts as a long-term substitute. She began considering master’s programs to further her creative development.

Back in town to decide on her next step, she met her husband, Mark, and they started a family. The intense years of mothering two young sons and growing a business with her husband sidelined writing completely for four or five years.

She made peace with this break and found that when she started writing again, everything flowed. In January 2015, Steinorth completed the intense MFA for Writers program at Warren Wilson College.

Steinorth has found encouragement over many years from a writer’s group that noted poet and Record-Eagle columnist Fleda Brown hosts at her house.

“It’s been absolutely wonderful to watch her develop as a writer,” Brown said of Steinorth. “Nobody writes like Jen ... Her poems do things that are sometimes very challenging but also very interesting.”

Sharing poems in person is a cherished aspect of her art, allowing her to engage with listeners. She can explain whether a poem is made up, a fictionalized account of an actual event or a poetized version of herself.

“When you read you can give little bits of backstory,” Steinorth said. “It helps to be able to give the personal context that informed the creation of the character speaking.”

Readings also allow Steinorth to share about her craft, such as integrating artistic challenges with the human dimension.

“It’s lovely to talk with people about what you are concerned about, what you are struggling with,” she added.

Steinorth’s “A Wake with Nine Shades” features 86 pages of original works. She kicked off a book tour with a September release party at the local Botanic Garden. She has since presented in Vermont, Massachusetts and Texas with more dates coming into 2020.

With her younger son graduating high school this year, Steinorth is at another crossroads. She is considering PhD programs in dance because she feels called to teach. Steinorth already has extensive teaching experience in multiple disciplines, including currently teaching English composition at Northwestern Michigan College.

“Doing the readings has also reinforced that calling,” she said.

“A Wake with Nine Shades” is available at Horizon Books, Brilliant Books and Landmark Books.