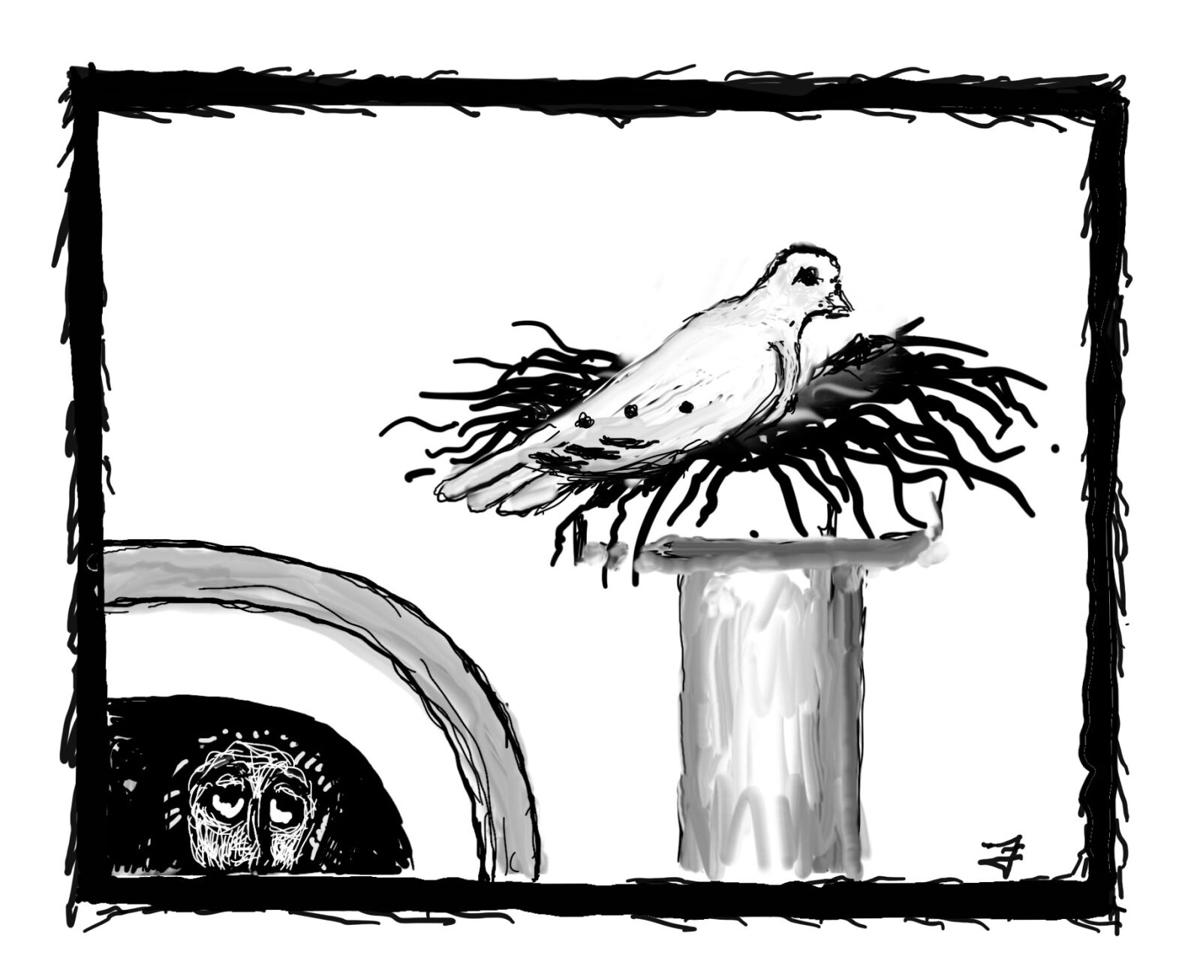 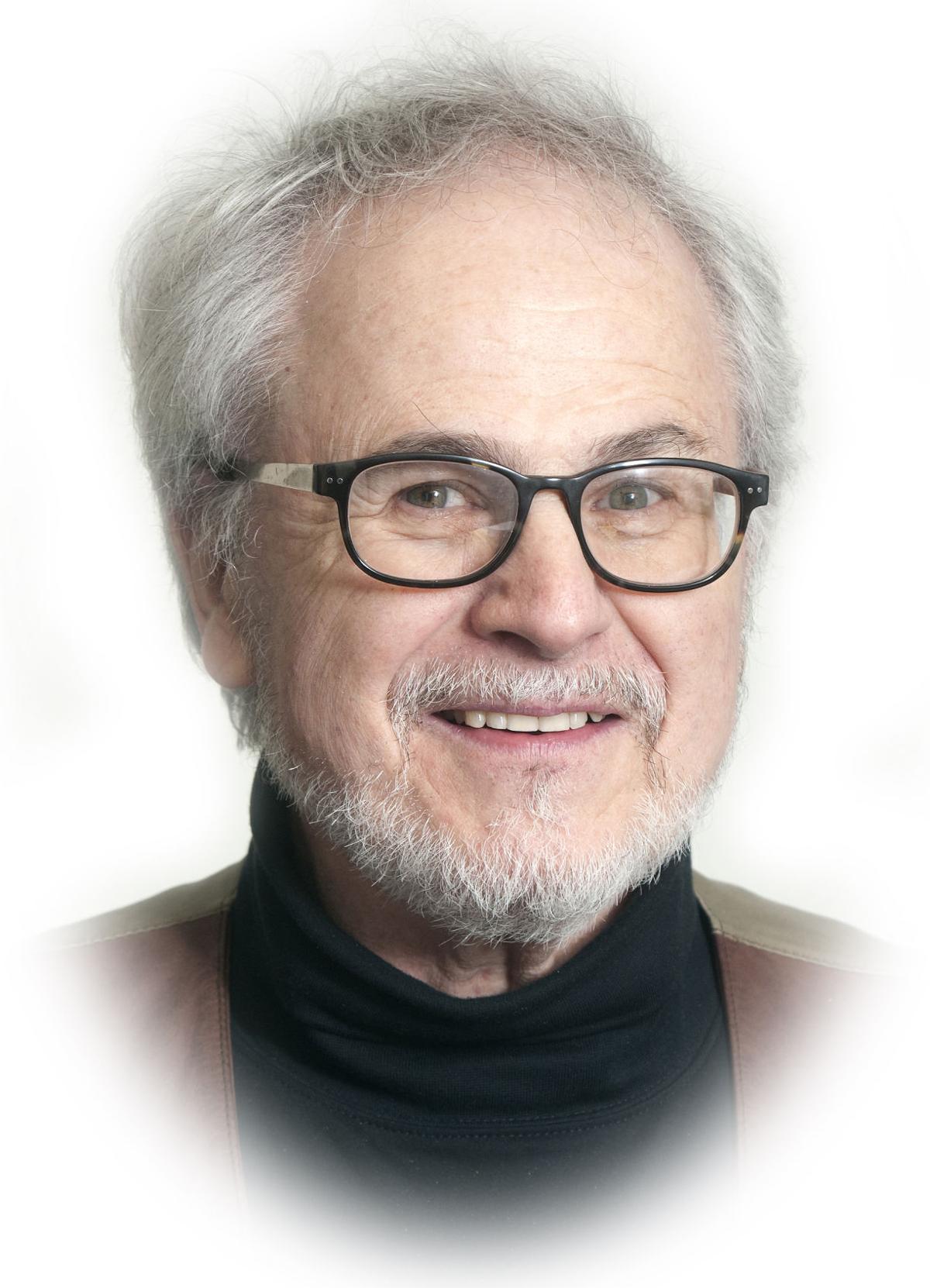 It started with an evanescent cooing. Part of a dream, a neglected house fan on low — or something more ominous. No, pigeons — must be — as I moved up from somnambulant layers. But the sound deeper now, rather haunting, like a cello instead of a violin, a contralto humming rather than a mezzo, pulling me into a minor key reverie. Enough.

Awake at last. I looked out to my front lawn and there was my answer: Two doves preening themselves in the rain. Mystery solved. A flutter of brown speckled wings. Then I saw her — perched 10 feet above me on a small ledge near my front door. A nest? Lady dove, surely you jest. Not enough room on that 4- to 6 inches for a cardinal or robin, let alone a fat dove. No — try elsewhere, please. The whole block is yours. My backyard too. Avaunt thee. Please.

Now both again. Divas for sure. They stood in soft eloquence on my small garage roof waiting for something I knew not what. Still obsessed, it seemed, with that small open triangle above my front door. I studied their sculpted perfect bodies, speckled impeccable dots along the neck and torso tipped with balanced heads and bright beaded eyes that looked right at me as if they knew me too well.

Then it got nasty.

They flew in unison above my front door. Again, to that small platform of 6 or so inches. Both of them squeezed to the max. A nest. A permanent landing. Impossible? No. Apparently yes.

Sorry, no. Not there. With all indulgence to lovers of bird species and Audubon devotees, I did not want two birds pooping on me as I left to ride a bike or get groceries not to mention bombing those infrequent guests who dropped by to try my cooking efforts as their appetites were compromised by a birdly gift from above.

I had to do something.

Be artful, my wife said. Nothing heavy. Right. No plants. No bottled water. No glider planes. And good luck without any ladder to reach 10 feet above.

I used an improvised pole to put up a small plastic planter. They flew in and dislodged it, clinging with attitude to the platform. They glided to an adjoining branch, then back. I watered them gently with my hose. They ignored me. It took five minutes, then they acknowledged with patrician indulgence they were after all getting wet.

They left again. No time to lose. I remembered of all things Carmen Miranda. Yes, that old silly movie stuff wherein she sings with a bushel of fruit on her head. Somehow her memory often comes back to me, victim of late night inane musicals over the years alternating with Xavier Cugat and his Chihuahua and the kinetic Latin singer. This was a tip. No bananas, guavas or papayas were on hand so I taped together two mid-sized plastic planters, then taped this to an extension pole from the garage. A piece of waxed fruit was considered. I jammed the planters in the opening above the porch and fixed the extension pole tight to the porch slab.

They came back and watched too patiently. They tried again and again to land in between the planters and finally after a few days gave up except for beady glances from a nearby tree whenever I opened the door. Then wind dislodged the pole. Shaking I jammed the pole bottom more securely, tightened it until it squeaked and replaced the “Miranda” pots.

They came back a dozen times, hoping for an opening. I heard more cooing at more hours than I can ever recall. But finally they stopped coming

Usually at twilight I still hear them shaming me. Cooing as I sit near the door, reminding me of my humanoid infraction of their bird rights. Somehow it gives me a chill.

lI know the pots method is marginal. I’ll have to think of something if other doves persist. But for now my house was free of mad flutters and organic bombs. I trust they survived somewhere else in the neighborhood. Then again I noticed something ominous on my neighbor’s polished car. My truck remains vulnerable.

I still wear a hat near the front door. I look up slowly. I listen. One can’t be too careful.