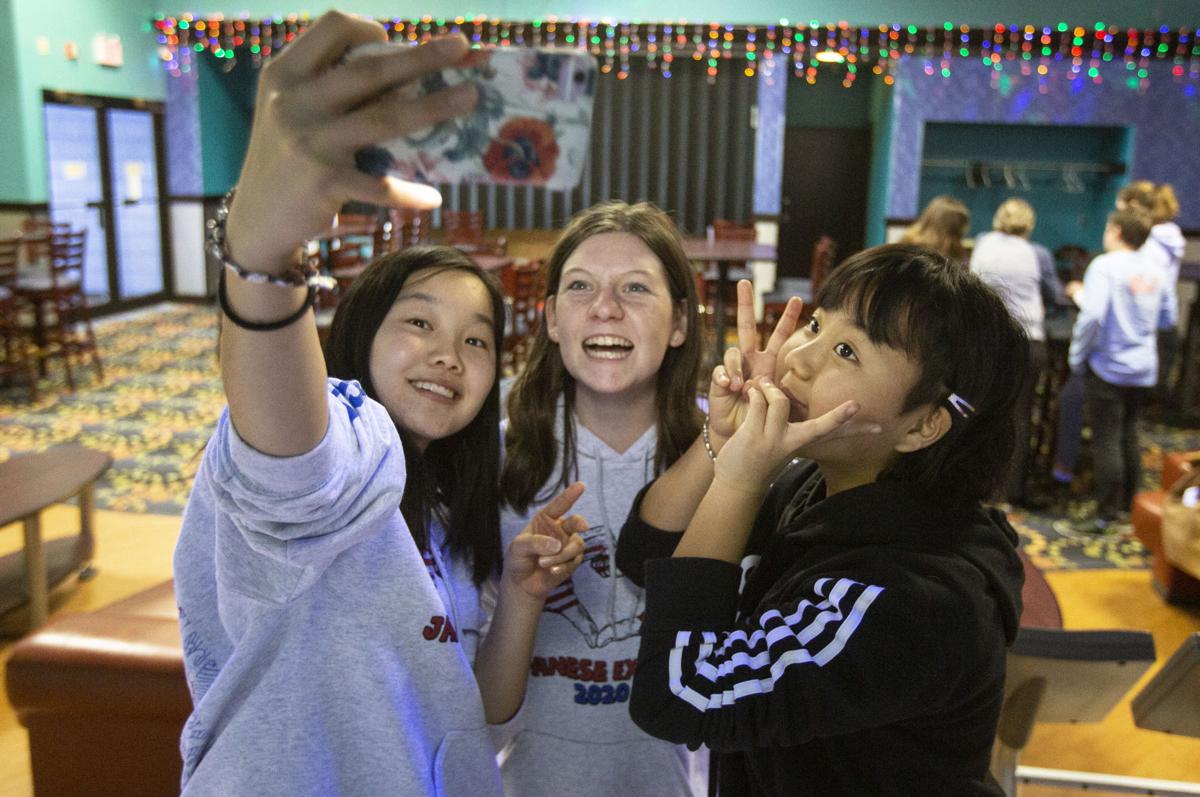 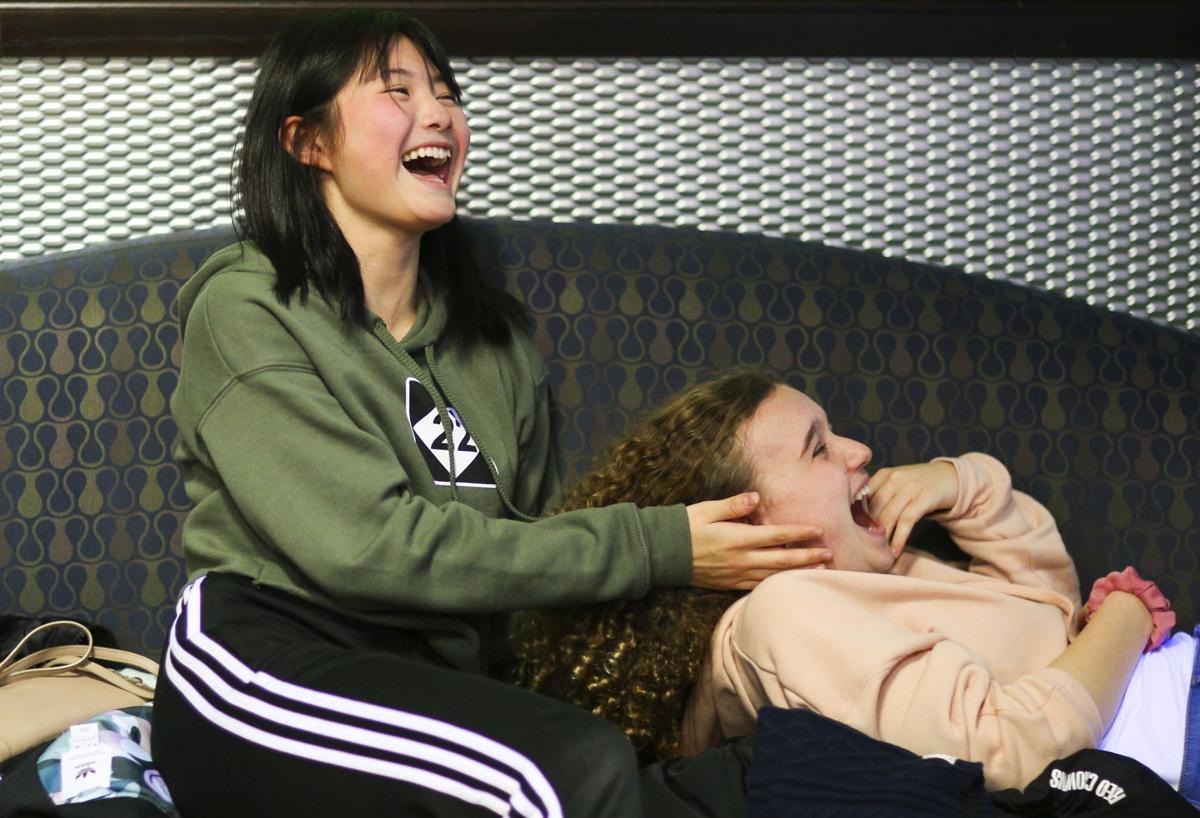 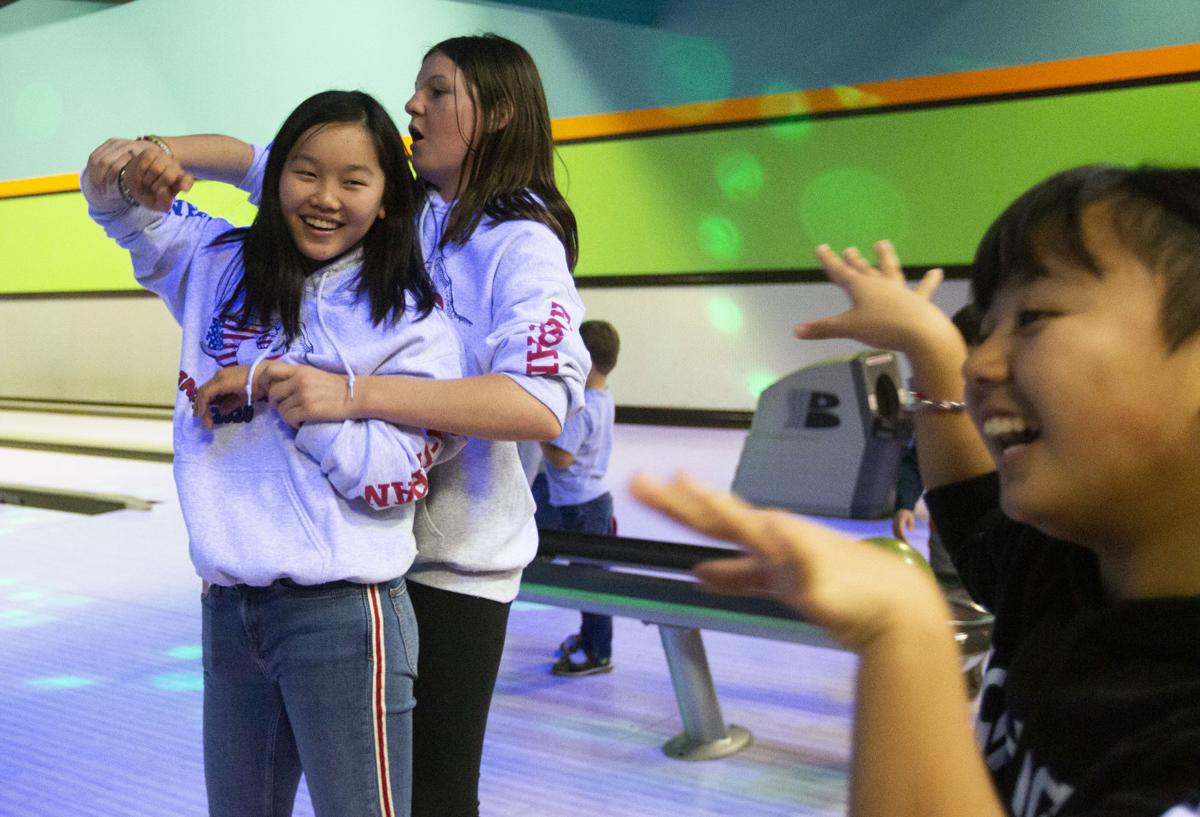 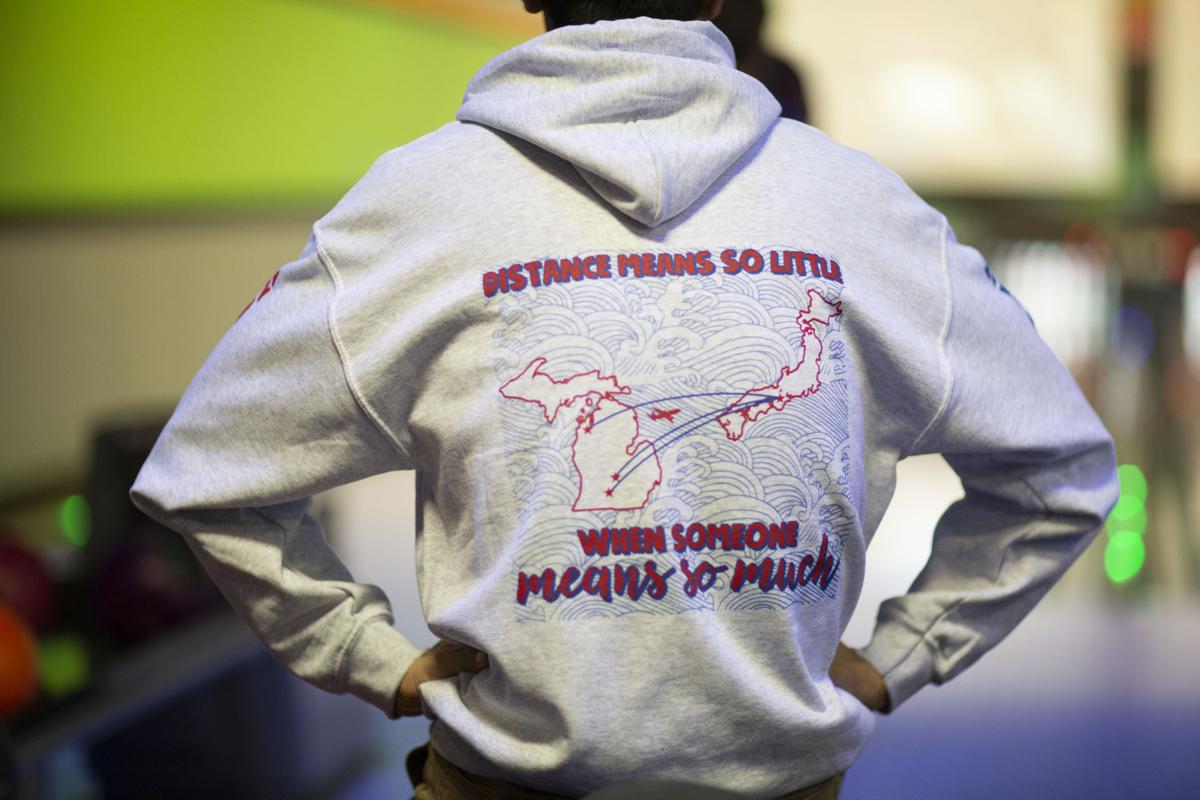 A teacher sports a sweatshirt while bowling at Lucky Jack's Bowling Center in Traverse City on Thursday. 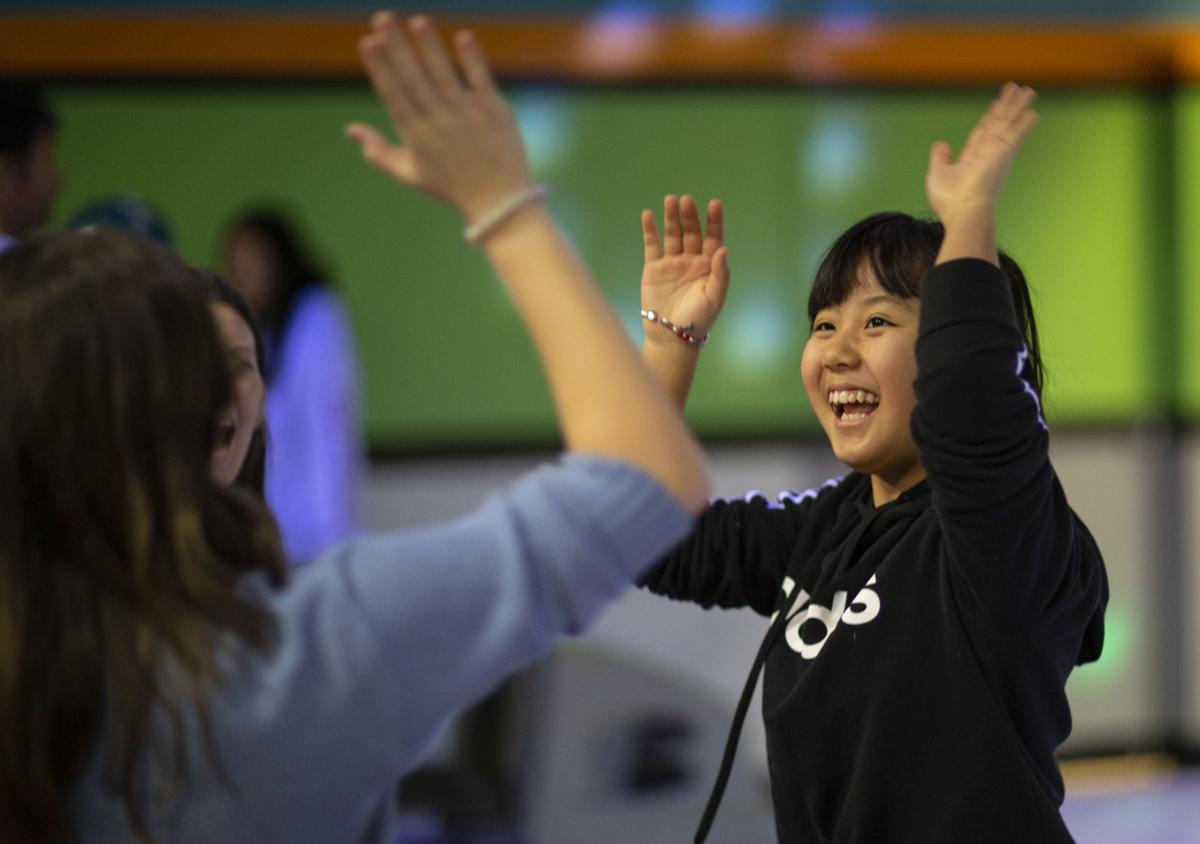 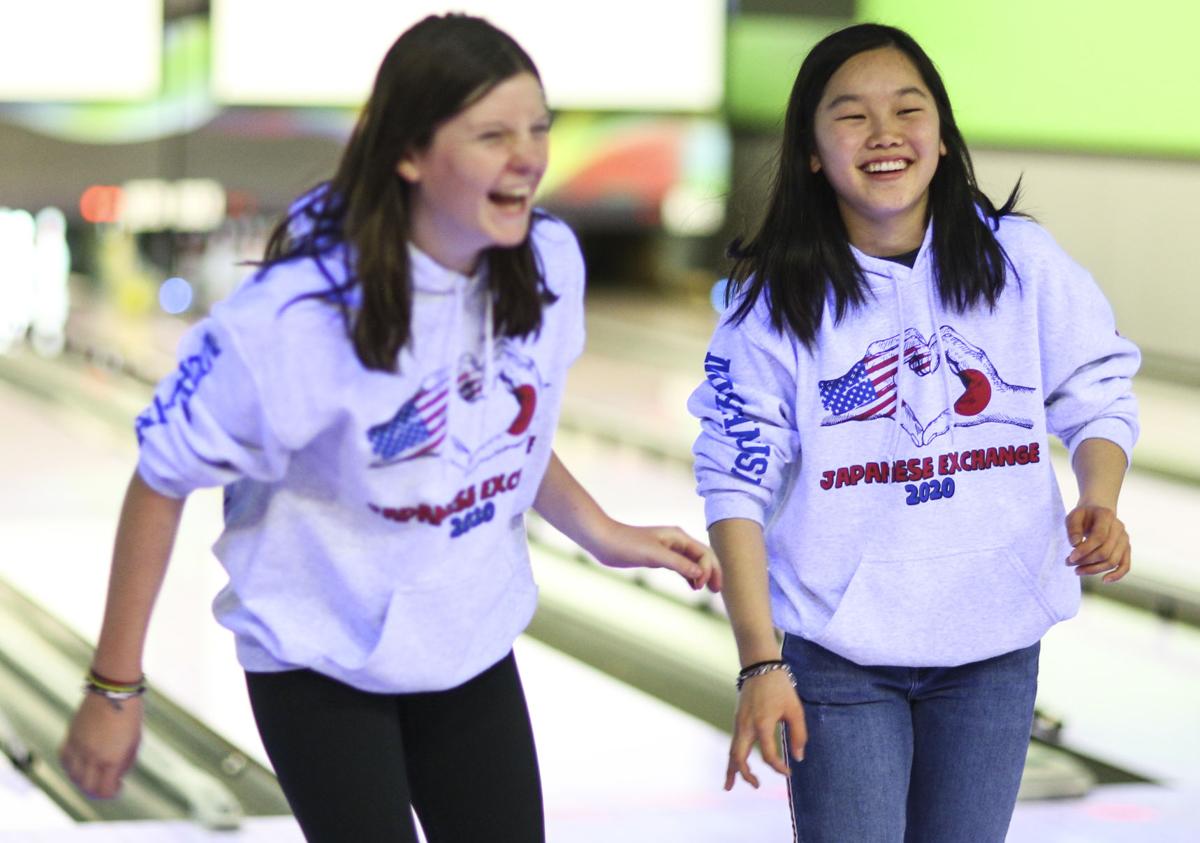 A teacher sports a sweatshirt while bowling at Lucky Jack's Bowling Center in Traverse City on Thursday.

TRAVERSE CITY — Maria Heiman knew being part of an exchange program would give her a chance to explore the history and geography of another country.

What the 13-year-old hadn’t realized was how much she’d learn from hosting an exchange student.

“After just like the first hour of Rune (Taniguchi) being at my house, I realized how incredibly fun and different — but a (chance to learn) — it is to have someone from a different culture living in your house,” said Maria, a Traverse City East Middle School eighth grader.

Rune Taniguchi, 14, is one of six students from Koka, Japan, who spent Jan. 10-17 in Traverse City as part of a sister city exchange program.

Koka was established in 2004 when the towns of Minakuchi, Konan, Koka, Shigaraki and Tsuchiyami merged.

Traverse City and Tsuchiyama originally signed a sister city agreement on May 20, 1970, according to Koka’s English website. DeWitt and Konan and Marshall and Koka became sister cities April 4, 1994, and April 20, 1984, respectively. Shigaraki originally was sister city to Icheon, Republic of Korea.

Koka’s relationship with all four were reaffirmed Nov. 19, 2005, according to Koka’s website.

“Our goal is really for them to just experience life as a northern Michigander,” said Marci Perthes, a counselor and the exchange program coordinator at West Middle School.

American and Japanese schools are very different and it was a good experience to see that, Rune said through a translator.

The weather also is different, with Japan being warmer than Michigan, and activities like skating on a frozen lake — her favorite thing as of Wednesday — aren’t possible, she said.

It was shopping and getting to try new food that won over Kotone Yoshida, 14, who also spoke through a translator.

Kotone said she hopes to bring her host, Eileen Gibens, to Universal Studios Japan’s The Wizarding World of Harry Potter.

Eileen, 14, an East Middle School eighth grader, began bouncing up and down in excitement when Kotone said she wanted to take her to Universal Studios Japan. Eileen said she now is planning on bringing her Harry Potter wand when she and the other hosts travel to Japan in February.

Eileen will be stay with Kotone, Maria with Rune and the other Traverse City host students with their respective exchange students, Perthes said. Additionally, they’ll be traveling with 14 other students from DeWitt and Marshall schools who hosted other Koka students last week, she said.

“I love being a part of it, being able to go over there and see the connections — whether it’s here or there — the connections that can be made in such a short time with such a large language barrier,” Perthes said.

“I think students soon realize that teenagers are teenagers, whether you’re in Japan or America,” she said. “It just opens their eyes to the world and it’s just a great thing to be a part of.”