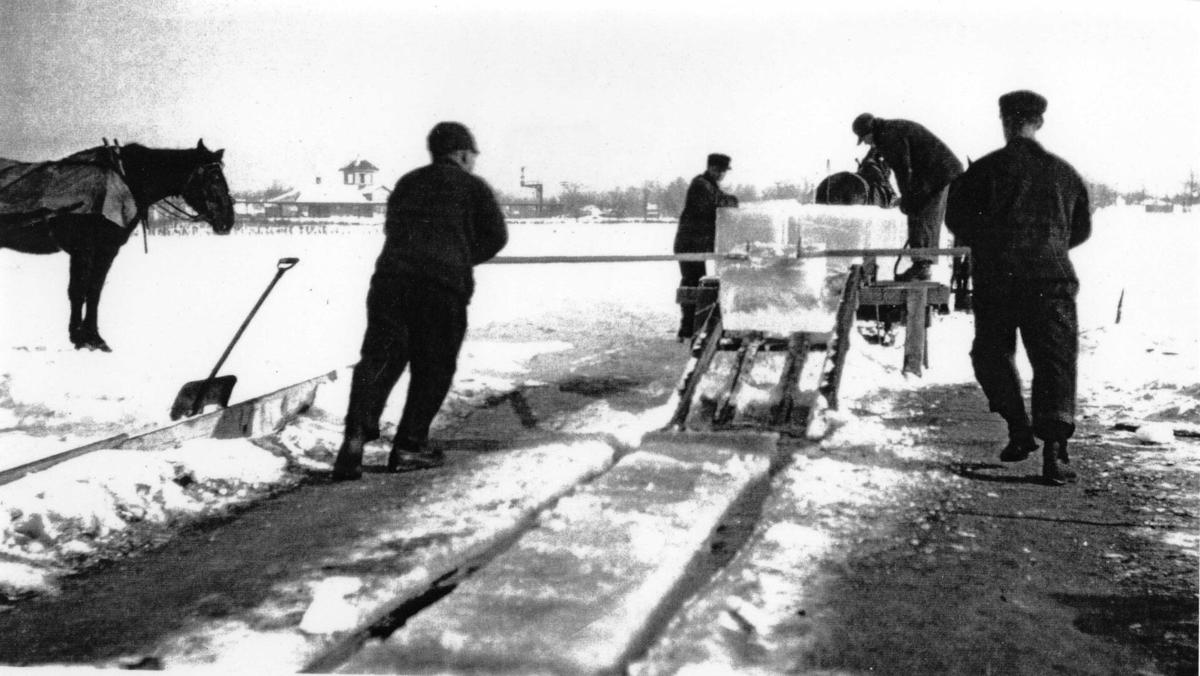 Cutting ice blocks out of Boardman Lake around 1900. This image is taken looking northeast, with the railroad station in the background. 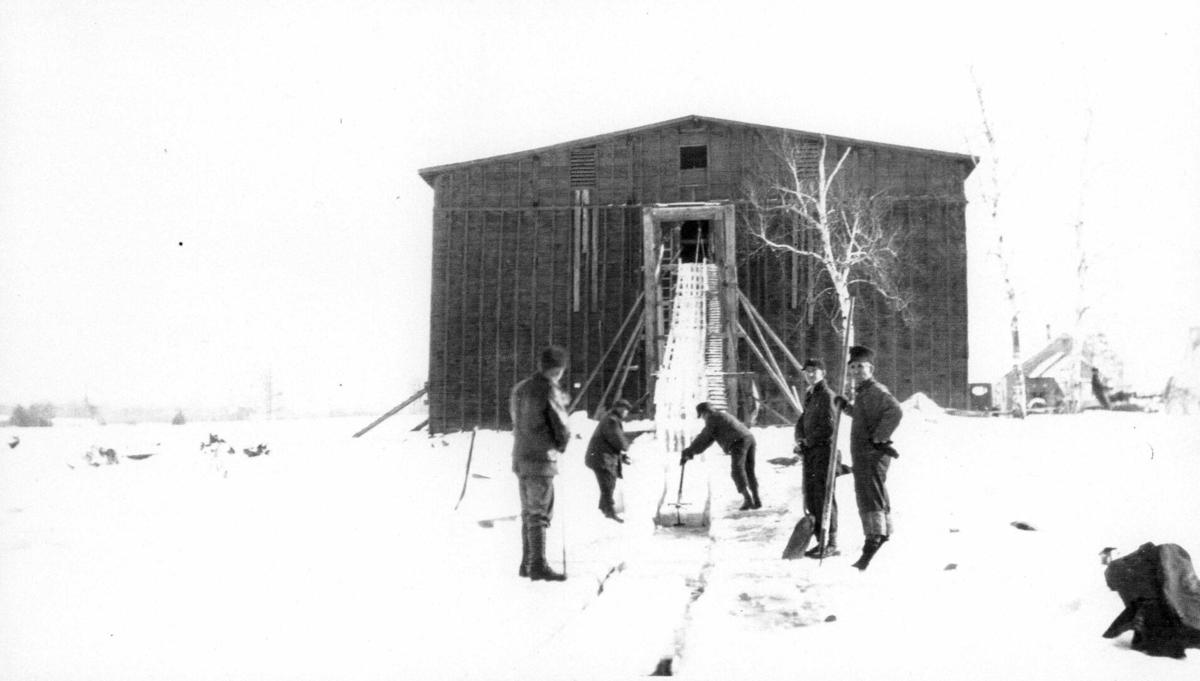 Loading ice into a Traverse City area ice house near the turn of the century. 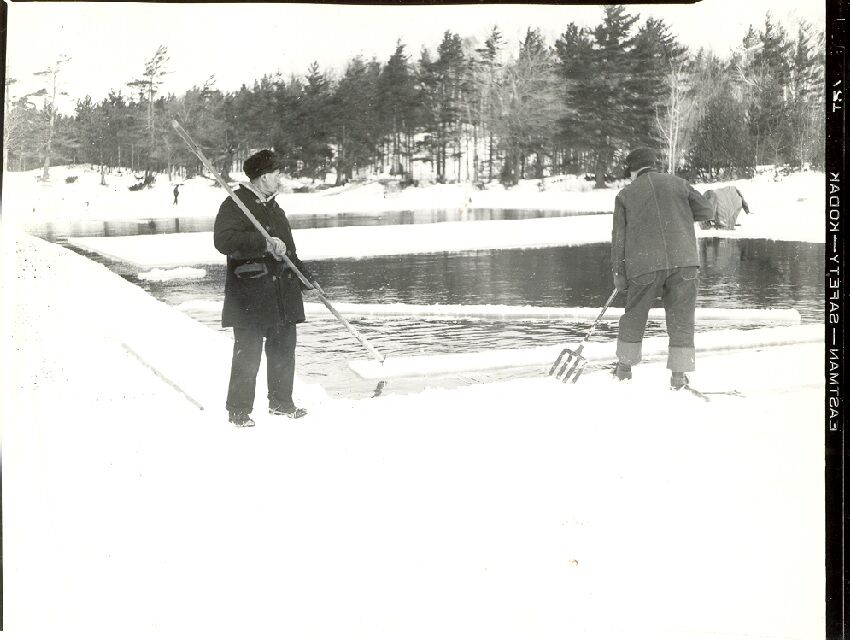 Cutting ice blocks out of Boardman Lake around 1900. This image is taken looking northeast, with the railroad station in the background.

Loading ice into a Traverse City area ice house near the turn of the century.

TRAVERSE CITY — During this stressful “pandemic” winter, northern Michiganders may be happy to hear of even a small reason to rejoice, of one local tradition that is carrying on.

This tradition generates serious discussion in the media, and surely during many of those now ubiquitous online friends and family meetings. The topic in question? Ice.

Will the bays freeze over? How thick is the ice on the lakes? How long will the ice last? In the 21st century such curiosity is certainly of import for those involved in ice sports and an interesting pastime for many others.

But within the lifetimes of our older citizens the operations of an entire industry rested on the answers to such questions.

Stretching from the early 1800s well into the 1930s, millions of dollars were made, and lost, in the ice trade.

And there were Traverse City livelihoods dependent on that business.

As early as 1880 the average urban dweller in the United States consumed a ton of ice each year.

Initially all ice was harvested from frozen winter waters. Then ways to manufacture “mechanical” ice were developed after the unusually warm winters of 1889 and 1890 devastated the natural ice trade.

Natural or mechanical, ice would be stored in ice houses, and then delivered to businesses and homes throughout the year.

“The delivery man wore leather chafes on his legs for protection, and he would break the ice up to an appropriate size and put it in the icebox. This reminds me of the milk also being delivered on the front porch, and how it would freeze in the glass bottles with frozen cream coming over the top,” reminisces Greenlaw.

Greenlaw also remembers his parents putting a sign in their front window indicating how many ice blocks they wanted. That sign was probably an “ice card.” Most families had ice delivered to their homes once or twice a week, and they used these cards to indicate how much ice their household needed.

Of course, both Native Americans and white settlers living in cool climates had used ice caves and ice pits for food preservation for centuries. So what led to the birth of the ice trade?

What happened was American capitalism. In the early 1800s New England merchants discovered shipping methods which could keep ice blocks intact for long periods of time. This gave them the ability to commercialize the sale of ice. Thus the ice trade developed.

At first that trade focused on sales to wealthy individuals and large businesses. But soon smaller businesses and single families bought into this new method of food preservation. Iceboxes became common throughout the community.

Traverse City had numerous commercial ice houses, and individuals also cut their own ice. Helen Vogel recounts that in the early 20th century her grandfather, W.F. Wilson, cut ice for one of the ice merchants in Traverse City. Part of his pay was being allowed to borrow the ice-cutting tools so he could cut ice from East Bay for his own ice house.

Sandy Joyce’s grandfather, James C. Hopkins, had his own ice business on Boardman Lake. He lived at Eighth and Railroad with a barn across the street.

As late as the 1940s, William O’Brien took ice out of West Bay. O’Brien lived and ran an ice business near the mouth of the Boardman River, in the area that now hosts the Holiday Inn Resort.

The ice trade enabled longer preservation of all types of food, revolutionizing the meat, vegetable and fruit industries, and enabling significant growth in the fishing industry. It also encouraged the introduction of a range of new drinks and foods.

Yet as wonderful as the icebox was, it had its drawbacks. One was that ice melted. The Greenlaw’s icebox, mentioned earlier, sat outside on the back porch. That enabled water from the melting ice to drip straight onto the ground. An icebox placed inside a building had to have a drain pan catching the constantly dripping water. Drip, drip, drip. And of course, that drain pan had to be regularly emptied.

“I remember the pan underneath that caught the water from melting ice that had to be emptied every day,” recalled Traverse City resident Carolyn Micklatcher.

Regularly emptying the drip pan was only one of the problems with the icebox. Most iceboxes were constructed of wood on the outside, a metal, like tin, on the inside, with some type of insulation, like straw, layered between the two. The insulation and wood absorbed odors from both the food being stored, and the sediment found in ice taken from natural bodies of water.

Such drawbacks made the introduction of electric refrigerators, which became very popular in the 1920s, a welcome development. They were so popular that sales of that new type of refrigerator continued to rise even during the Great Depression.

Whether you call it an icebox or a refrigerator, looking outside at our current February deep freeze may make it hard to appreciate the conveniences of refrigeration.

But just envision those coming July days when, even in northern Michigan, the thermometer can top 100. Sweat may begin to form on your brow. Then imagine opening your refrigerator and pulling out “a cold one” of your choice, or ice cream from the freezer. Refrigeration can be awesome.