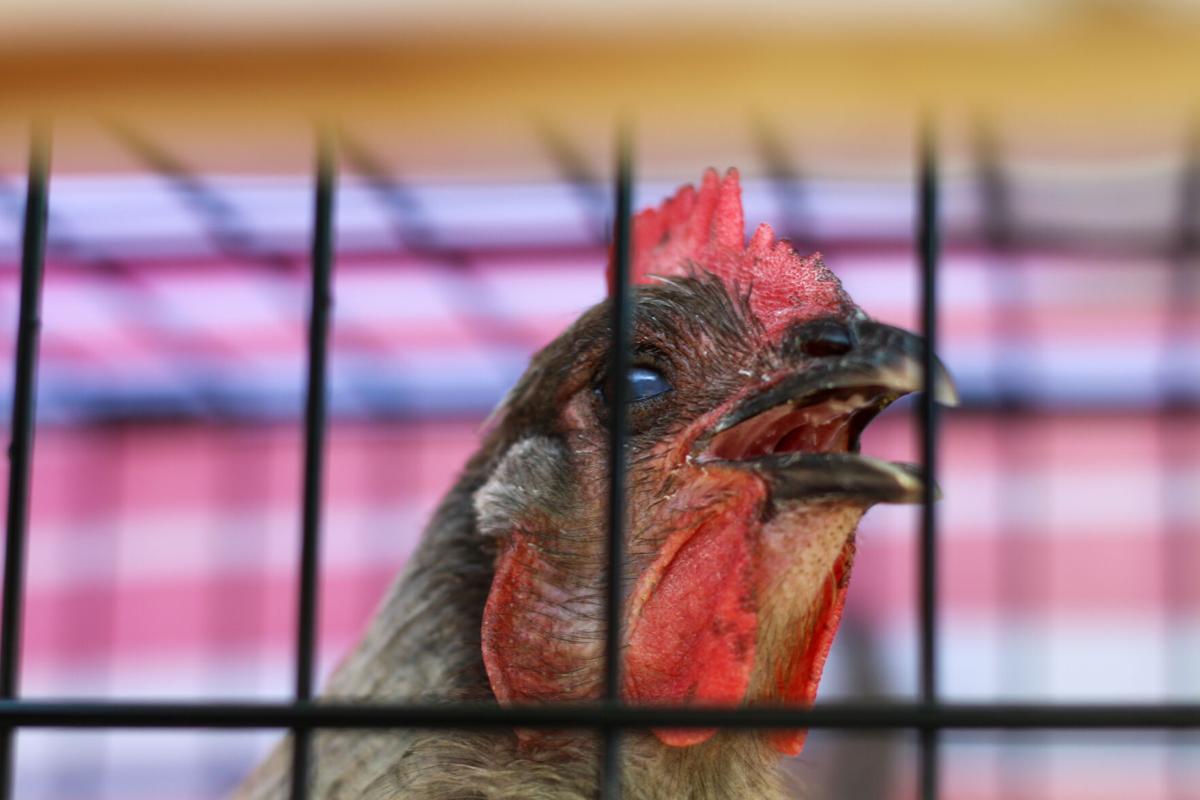 Penny the chicken meets with voters at a meet the candidates event last Saturday for the Omena Mayor’s Race. 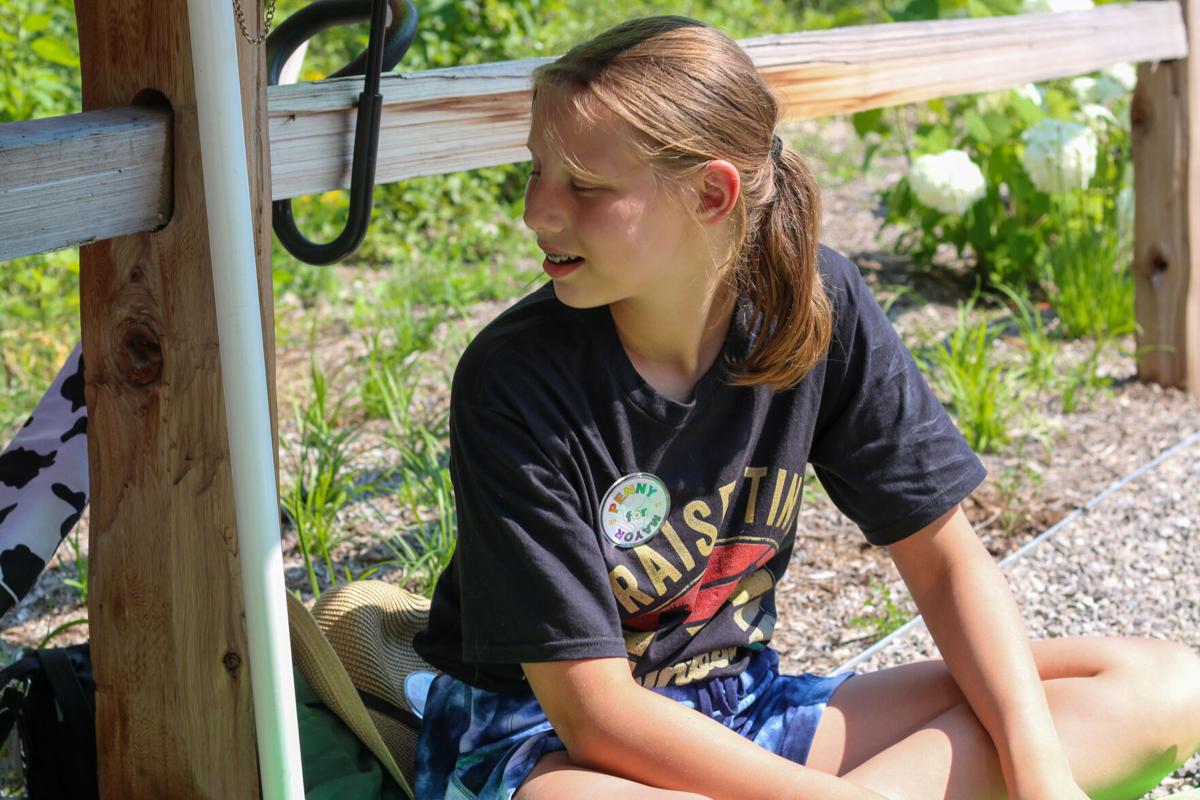 Lilia Lavriola, 13 of Elk Grove Village, Ill., displays 'Penny' the chicken who's running in the Omena Mayor's Race at a meet the candidates event July 17. 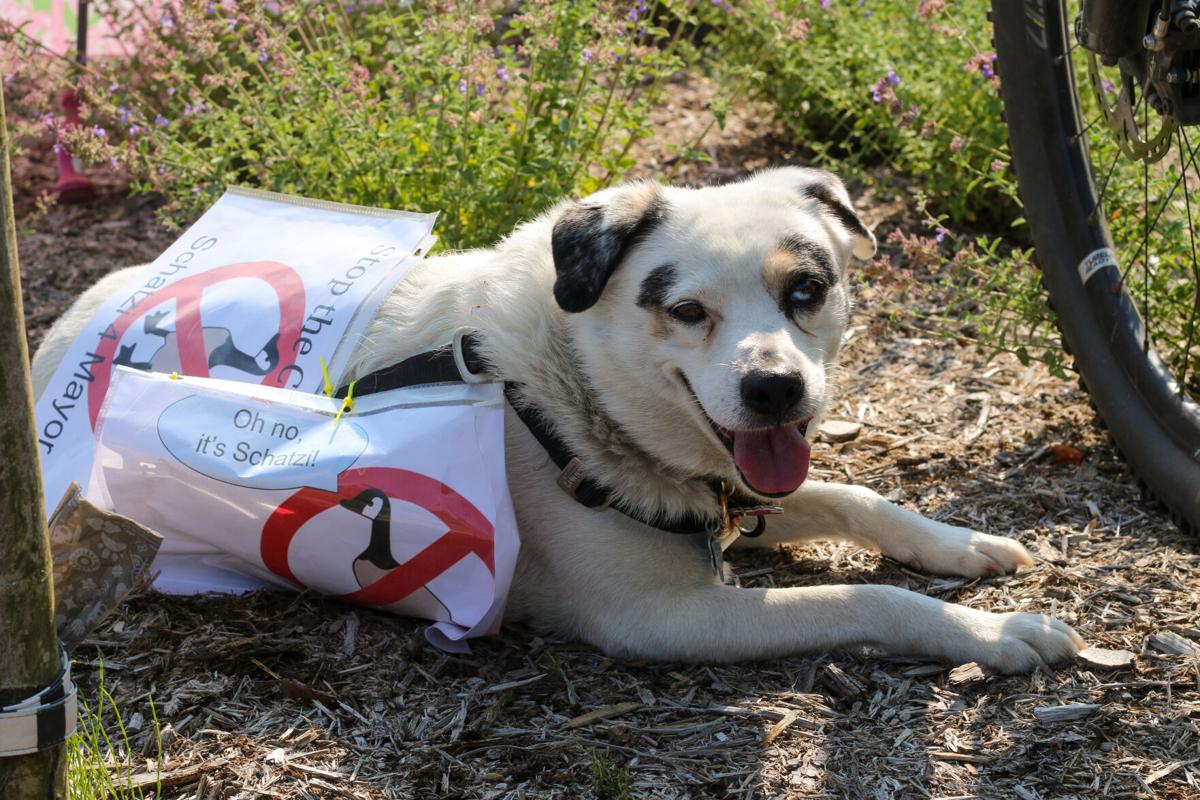 Schatzi Putnam displays a “Stop the Canadians!” sign with a cross through a goose at a meet the candidates event for the Omena Mayor’s Race last Saturday. 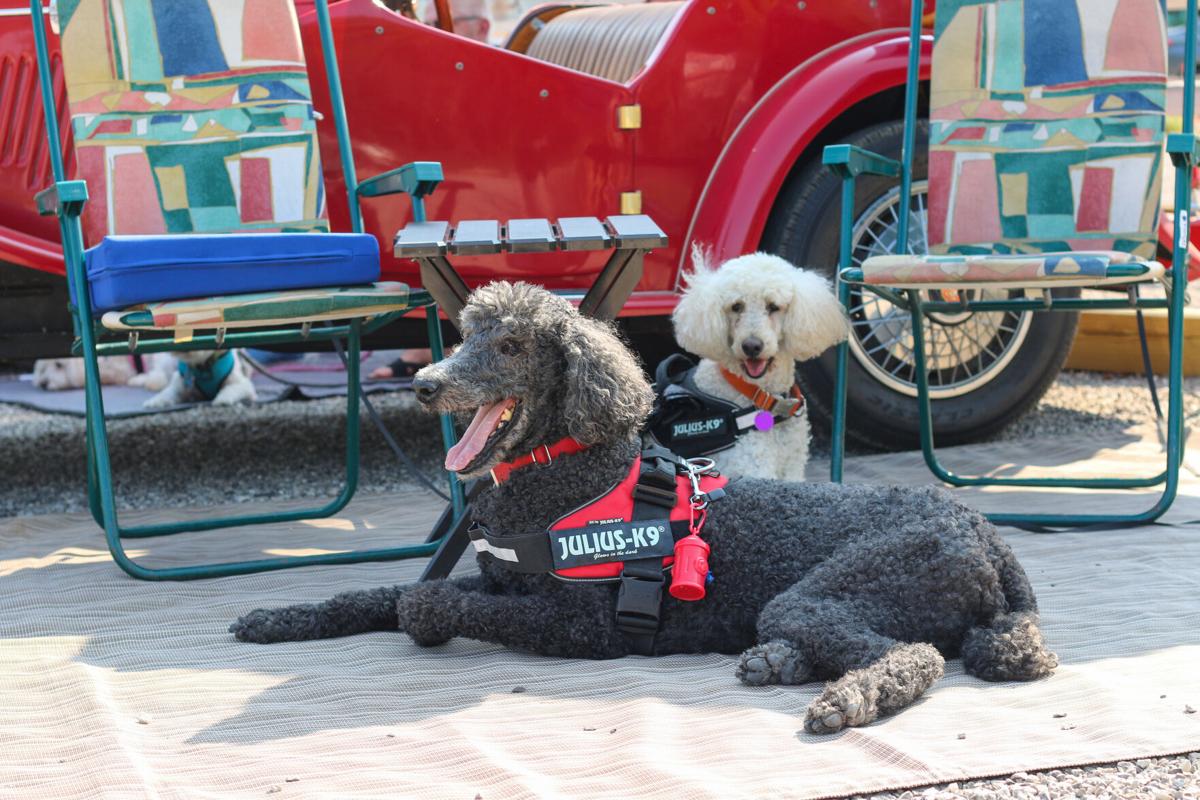 Mel and Ginger Chakroff, co-mayoral candidates at a meet the candidates event July 17 for the Omena Mayor's Race. 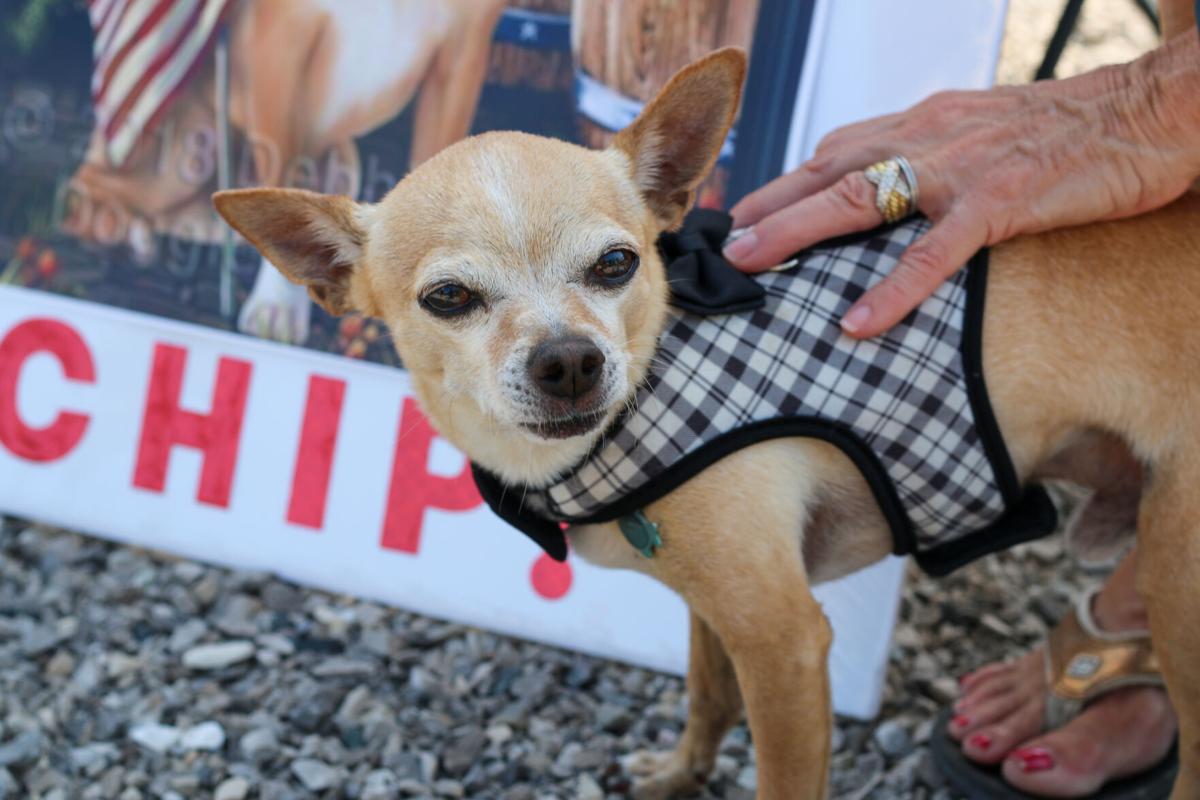 Chip the chihuahua at a meet the candidates event Saturday, July 17 for the Omena Mayor's Race.

Penny the chicken meets with voters at a meet the candidates event last Saturday for the Omena Mayor’s Race.

Lilia Lavriola, 13 of Elk Grove Village, Ill., displays 'Penny' the chicken who's running in the Omena Mayor's Race at a meet the candidates event July 17.

Schatzi Putnam displays a “Stop the Canadians!” sign with a cross through a goose at a meet the candidates event for the Omena Mayor’s Race last Saturday.

Mel and Ginger Chakroff, co-mayoral candidates at a meet the candidates event July 17 for the Omena Mayor's Race.

Chip the chihuahua at a meet the candidates event Saturday, July 17 for the Omena Mayor's Race.

OMENA — If elected mayor, Schatzi Putnam barked, the village of Omena will be free of Canada geese.

Schatzi’s fowl feelings are his campaign base, and he wore a vest with a red cross through a goose that said “Stop the Canadians!” at a meet-the-candidates event July 17.

His opponents also brought game — like fetch and tug of war. But perhaps the biggest show of political acumen was the doo-doo bags harnessed to co-candidates Mel and Ginger Chakroff. The pair of poodle mixes campaigned in a cherry red classic car and pleaded for table scraps.

The Omena mayoral election — featuring animal candidates, encouraging “bribes” and money for votes to fund historical preservation — has become a tradition of its own.

In its fifth year, 22 non-human residents of Omena and its surrounding areas applied for candidacy. There are no parties, but 18 candidates are dogs, two are cats, one is a chicken, another is a goat and the last is an imaginary dog.

The imaginary dog, Lucky Schaeffer-Roll, was conceived by parents Gary Roll and Kathy Schaeffer who each lived in Chicago and couldn’t have a real dog. But according to campaign statements Lucky says that allows him to be anywhere and everywhere — especially world events that have canine first responders.

Asked why it should be elected mayor of Omena, Lucky said “I believe government should be like me — effective and invisible.”

Whoever is elected will serve a term of three years and participate in public appearances just as any other mayor would do. “Votes” are made by donations to the Omena Historical Society, which raised $7,000 in its 2018 election. Referencing Al Capone and multiple Chicago politicians, the OHS encourages people to “vote early and vote often.”

The sparsely populated Leelanau town between Northport and Suttons Bay (population 144) has hosted non-human elections since 2009. Organizers said they drew inspiration from a Kentucky town of similar size named Rabbit Hash that’s best known for its string of canine mayors.

But Omena’s sitting mayor is a cat.

Sweet Tart McKee is the incumbent mayor (owned by Harold and Kanda McKee), vying for a second term. Her face is featured on the “365 Cats Page-A-Day Calendar” for 2021, and a photo with Sweet Tart in a mask was distributed around town to encourage residents to wear mask during the COVID-19 pandemic.

Sweet Tart is the only cat to be allowed in the Northport dog parade.

“We love our politicians,” said Les Disch of Omena.

Omena is not alone in its recent trend of non-human mayors.

Rabbit Hash, of course, has been featured on Good Morning America for its mayoral “elections” of dogs since 1998 to raise money for its historical society using a similar format. Several other cities have drawn inspiration from the fundraiser and started animal mayoral races of their own.

Because it’s a fundraiser, anyone can vote and the votes raise money for history preservation, an important part of Omena culture.

The 163-year-old Omena Presbyterian Church — the site of the meet-the-candidates event — is the oldest continuous running church in Michigan. During the COVID-19 pandemic the church did not open its doors for the first time in more than 150 years. The name of Traverse City’s Old Mission peninsula is attributed to a mission settlement by Rev. Peter Dougherty. In 1858 he built the Grove Hill New Mission Church, now named Omena Presbyterian Church. For years Omena Point had a nickname of “New Mission,” but the name eventually wore off.

“Omena is more than just a point,” Debbie Disch said. “We combine a lot of water living and a lot of agriculture, the farms right around us are very much part of Omena.”

The church isn’t the only old building in Omena still standing. Just this past July the Omena Village Preservation Association completed a project to install historically appropriate windows on the Omena Post Office, built in 1859.

Funds generated from past mayor’s race went toward a brass historical marker in front of the church, said Sally Shapiro, 25-year Omena resident and president of the Omena Historical Society. Money also goes toward archiving and upkeep of the museum that makes its home in a 140-year-old building. Admission is free to the public.

“If you don’t maintain the past, then it is forgotten,” Shapiro said.

The nostalgia that still exists in Omena is part of the reason 17-year Omena resident Phil Goldman, originally from the north shore of Chicago, decided to enter his Chihuahua “Chip” into the race.

“I’m a big proponent of the nostalgia that I feel when I’m here,” Goldman said. “This area and the people in it are generational. There’s easily three-to-four generations that have been in most of these cottages. It brings something of what I was accustomed to when I was a kid, and that is everybody knew everybody.”

Goldman said Omena is “stuck in a timewarp” both aesthetically and also in a moral sense.

“We’re also stuck in a time warp with the values that our great grandparents had. I want my grandkids ... to be exposed to a simpler kind of life and what we’re experiencing today,” Goldman said.

“Not that all the things we’re experiencing are bad, they’re not. But they came from someplace. They came from people that did have simpler lives, and they then had values, work ethics and faith. They had a lot of things that seemed to be diminishing around us. And it’s moving so fast that we feel kind of helpless with changing.”

A parade of the candidates and the inauguration of the mayor is at 10 a.m. on July 24, ending at the Omena Presbyterian Church parking lot.