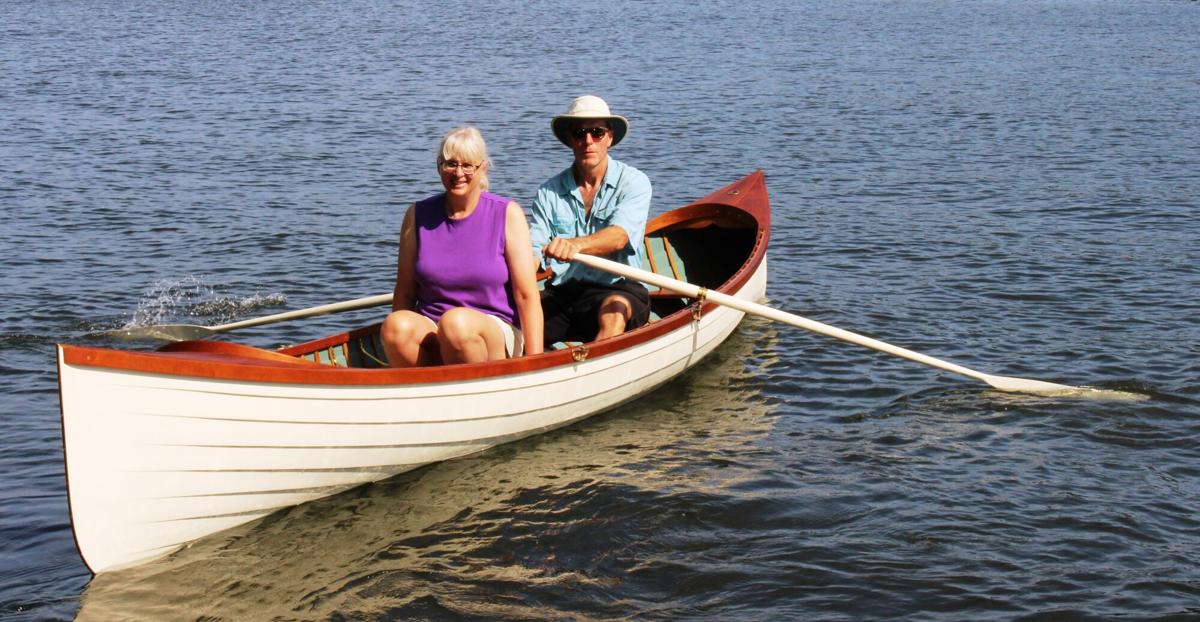 Jim Campbell, with his wife, Nancy, took the boat originally purchased by his great-grandfather back to the water this summer.

Dan, Jim and Ed Campbell stand behind their great-grandfather’s double-ender — a vessel capable of moving both forward and backward. Jim brought the boat back from rough shape because he “felt it was important to preserve such a grand family heirloom.” 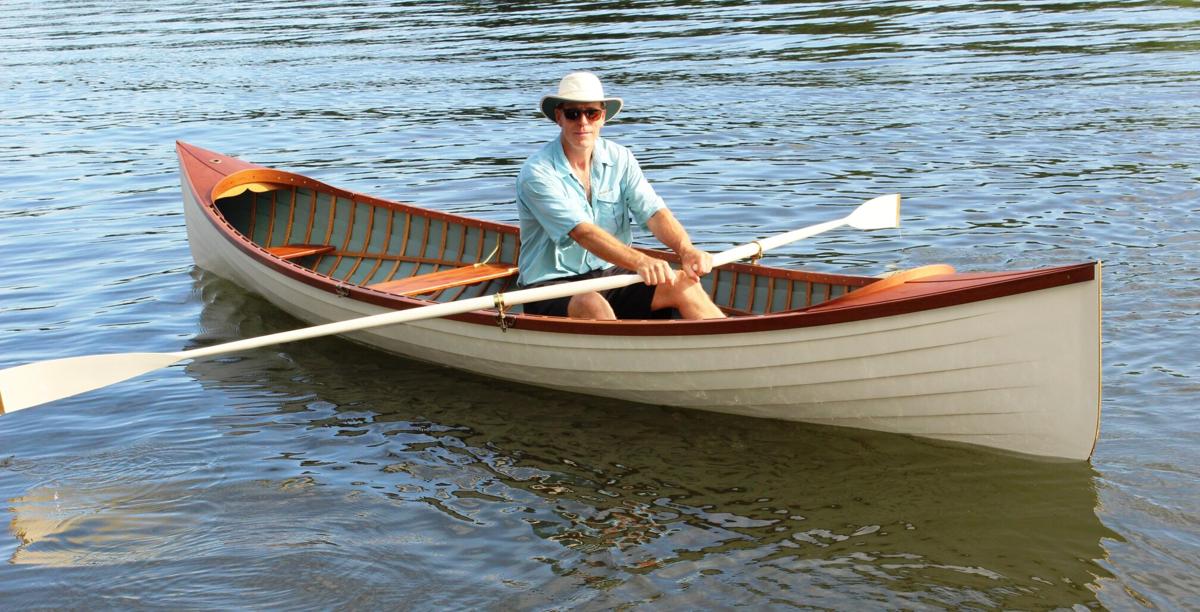 Jim Campbell, a self-professed “fix-it guy,” also plans to freshen up a 1918 boat. He also loves classic cars and has a ‘79 Trans Am that he got when he was 16 and a ‘62 Cadillac Fleetwood.

Jim Campbell, with his wife, Nancy, took the boat originally purchased by his great-grandfather back to the water this summer.

Dan, Jim and Ed Campbell stand behind their great-grandfather’s double-ender — a vessel capable of moving both forward and backward. Jim brought the boat back from rough shape because he “felt it was important to preserve such a grand family heirloom.”

Jim Campbell, a self-professed “fix-it guy,” also plans to freshen up a 1918 boat. He also loves classic cars and has a ‘79 Trans Am that he got when he was 16 and a ‘62 Cadillac Fleetwood.

Had Jim Campbell walked into his workshop at 8 a.m. on Jan. 1, and worked hour after hour, day after day, without sleep or rest of any kind, he’d have finished restoring his family’s century-old, double-ender rowboat at 4 p.m., March 24.

Give or take a week, or two.

“I spent four years working in my spare time, and logged over 2,000 hours of labor,” said the summer resident of Clam Lake, who lives in Ortonville southeast of Flint. “It’s helpful to not have a budget, or a deadline, when tackling a project like this — just work on it several hours a day and eventually it’ll get finished.

“Actually, I didn’t have a clear plan when I started, and I don’t think I was planning on taking it as far as I did. There was so much repair work to do.”

A few weeks ago, the 52-year-old Campbell and his family re-christened boat on Clam Lake. His 80-year-old father, Dan Campbell, also helped row the boat across the lake’s smooth surface, just like he did 75 years ago.

Years and decades of “just sitting,” the unique, double-ender row boat all but rotted away into dust and memories.

“That boat was really in bad shape,” said Dan. “It looked kind of like a hopeless situation. Every rib was broken — they were broken where they attacked to the keel — and some of them had really gotten rotted. And of course, the boat had been painted and then painted again.

“But (Jim) took it home and worked at it in his spare time in his basement during the winters, and he’s really done a marvelous job. He replaced every rib. He sized the ribs and bent them over forms to keep the boat from totally falling apart. He started at the middle and removed maybe three or four and when he got those replaced, he would then remove some more as he worked his way toward the ends.

The younger Campbell reflected on the legacy of the unique boat, a legacy that nearly was lost to the cobwebs and shadows of a barn.

“My great grandfather, Herbert Shotwell, saw this boat for sale while driving through the countryside in 1942,” said Jim, who added the used boat had a price tag of $60, a hefty price back then with World War II having just gotten underway, and all.

“My grandma described it as ‘an antique boat’ when they got it in 1942.

“That was a lot of money for him at the time, but felt he just had to have it, and returned with the money soon after,” said Jim. “He floated her on Clam Lake every summer, tied up to his dock and was used by the family and occasional renters, until the early 1960s when the ribs rotted and some of the cedar planks began to split and leak.

“My father and his brother, Ed (Campbell), remember camping overnight on the west side of Torch lake in the late 1940s with their mother, Margret Campbell. Herbert would tow them through Clam River and across to the west side of Torch Lake with a motor boat. After breakfast the next morning they would load up all the camping gear in the double-ender and row home. One day Ed was rowing fast on Clam Lake and broke one of the spoon oars.

With the boat put into dry dock, and eventually into the barn for permanent storage, the years passed — until the younger Campbell took on the challenge to repair and restore the unique craft.

“You see, I never rowed that boat, before,” said Jim. “It was kind of off limits to me when I was a kid. It was in too rough of a condition to be considered lake-worthy.

“I have always been a fix-it guy — I like working with wood and metals — but have never tackled a wood boat restoration before. In 2017, my Uncle Ed, who had owned the boat since 1988, gave her to me to restore. I took the boat to my home in Ortonville and began the restoration by removing the seats, railings and deck boards, then stripped off all the old paint. Being careful to keep the craft from falling apart, I removed only the center rib, sealed the planking joints with epoxy before priming and painting the small center section. I made a form that fit the inside contour and practiced soaking, steaming and warping the new ribs I milled from white oak.

“After successfully installing the center rib, I trimmed my form as I worked outwards toward the bow and stern, replacing several ribs at a time,” he said, “Next, I made new railings, seats, splash rails and floorboards out of mahogany and repaired the original spoon oars.”

Jim said he wanted to give “special thanks” to his father for “... his help installing the ribs, and helpful suggestions along the way.”

After all those years in storage, and then four years of restoration — if you recall, more than 83 days and eight hours of around-the-clock repair work — the boat was ready to be re-floated.

“We took it out (in mid summer),” said Jim. “It went really well, probably better than I expected. It had good stability. We had three people in it at one time, (though) it’ll hold four, two adults and two children would be ideal. I really wouldn’t want to stress it much more than that, though I think it would handle it.

“It was very easy to row and it had good stability.”

Jim said he would welcome information on the boat company, that apparently has long since gone out of business.

“I’d like to learn about their dates of operation and what different types of boats they may have made. I know this one came from there, but I think they also made some motorboats. If any (readers) have information about this company, I would love to learn more about their operations.”

Jim Campbell can be reached at njcampbell48@gmail .com

“(Now) we’re going to put it up for display,” Jim said of the boat. “We actually have another canoe that’s been in the family since 1918 that’s here in our garage and … eventually I’d like to display it in my retirement home, too. But we have to build that, yet, right here at Clam Lake.”