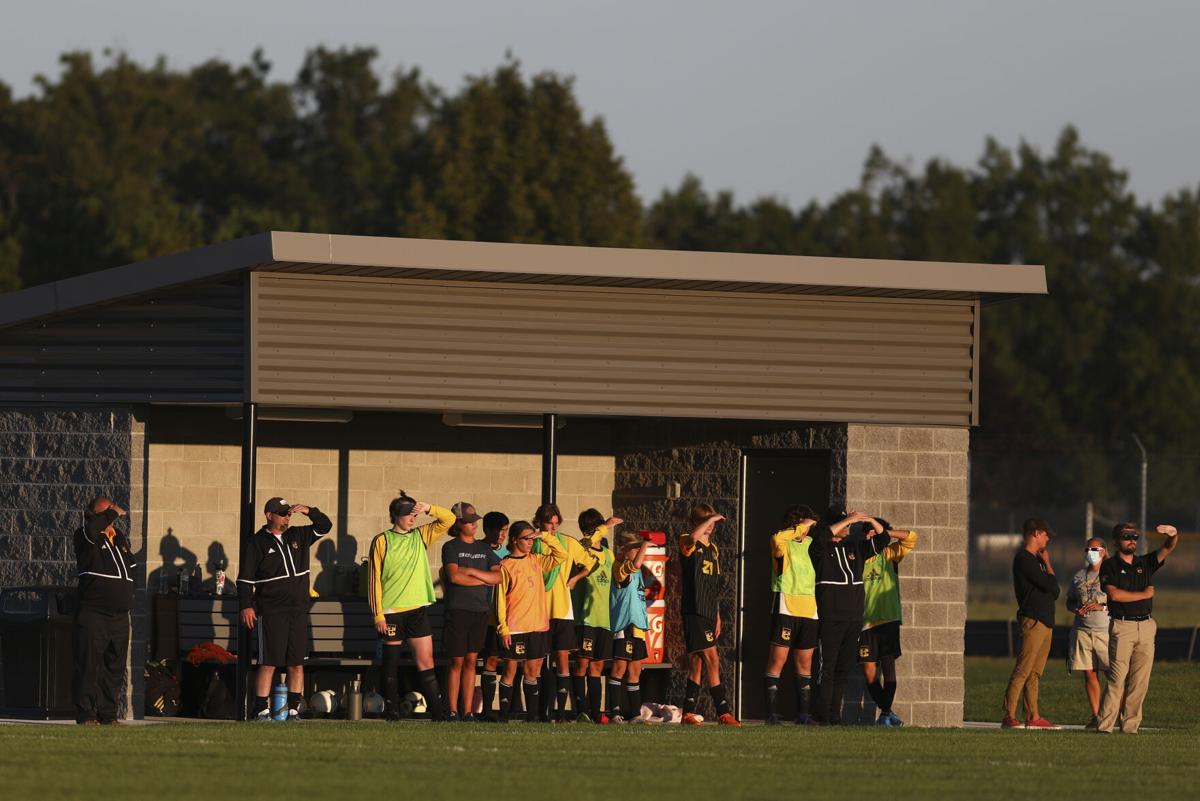 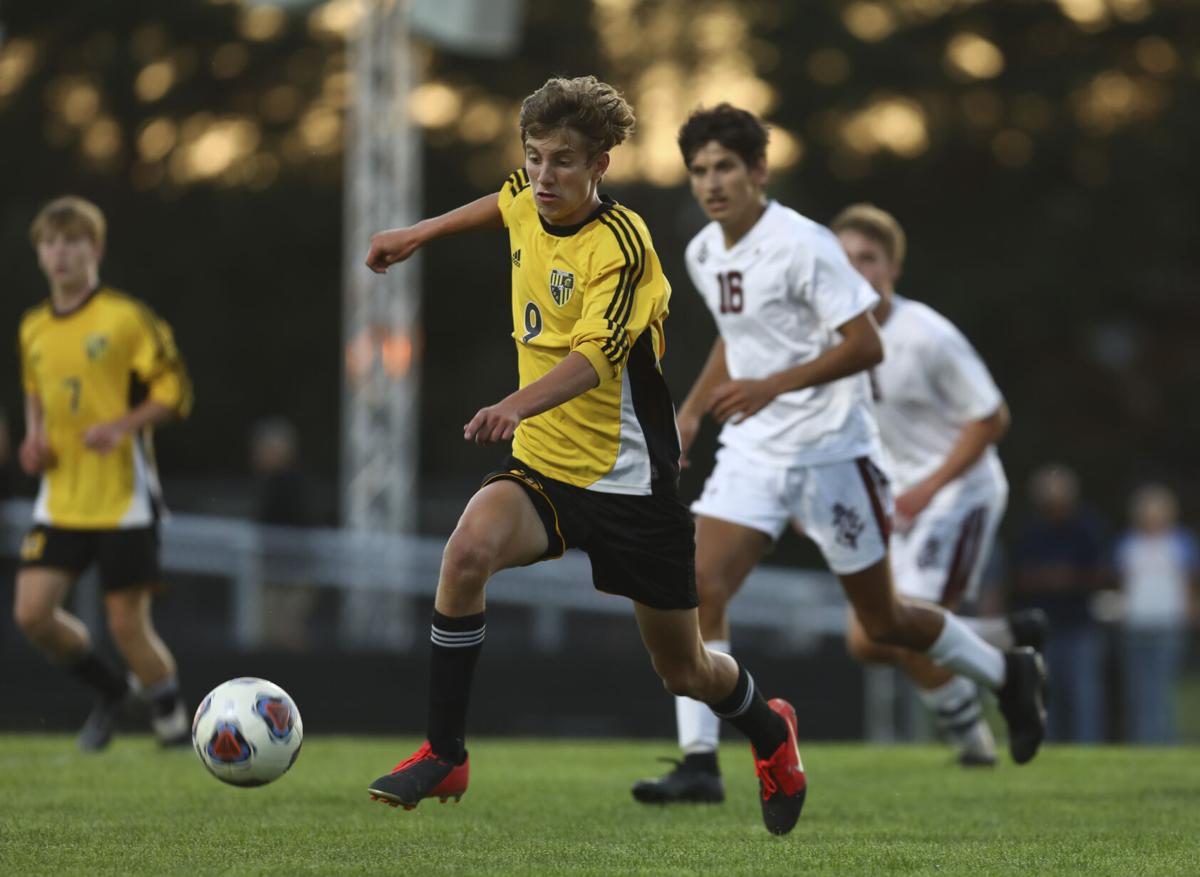 Traverse City Central’s Asher Paul (9) chases down a loose ball at the Trojan Athletic Complex in Traverse City on Wednesday. 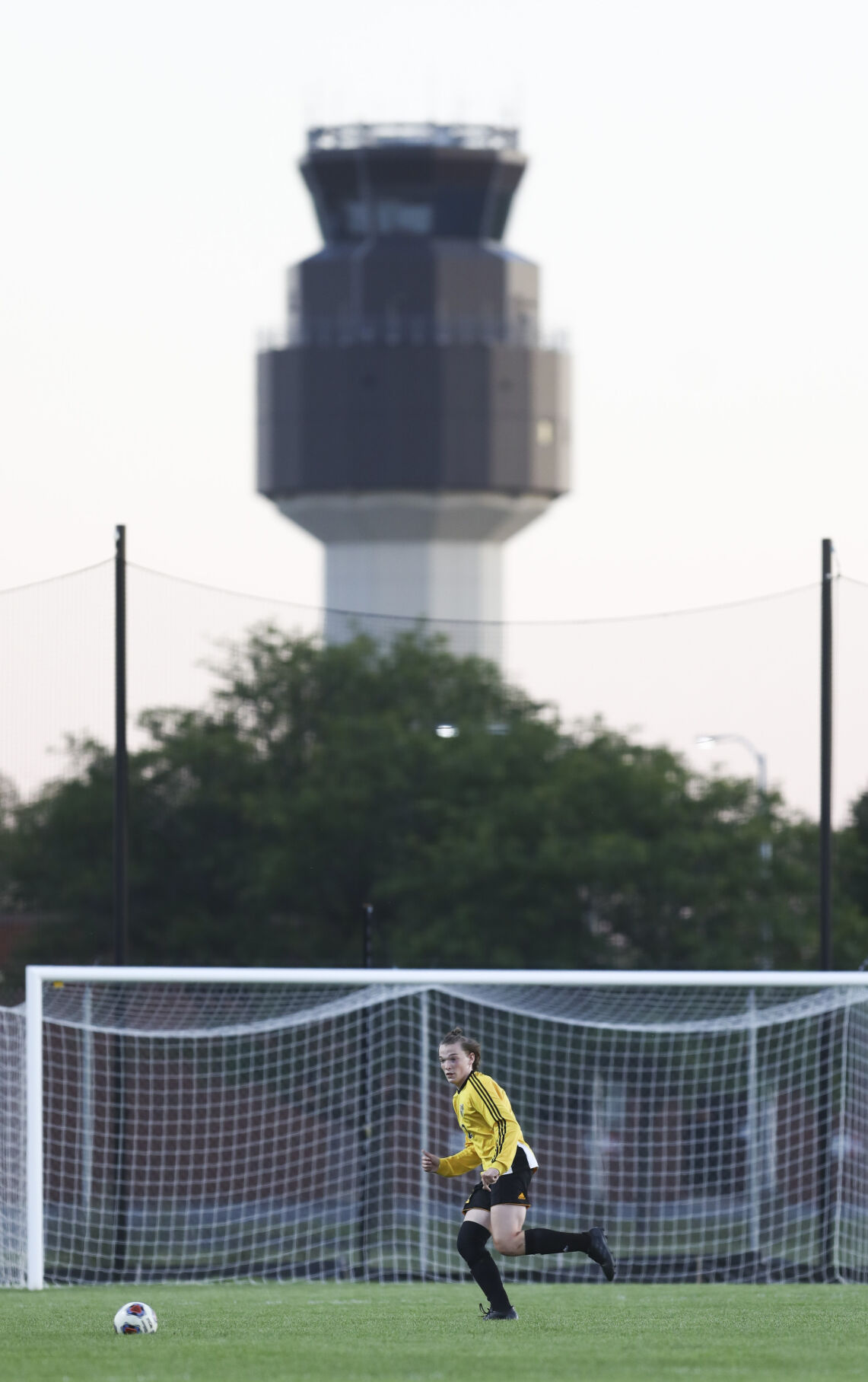 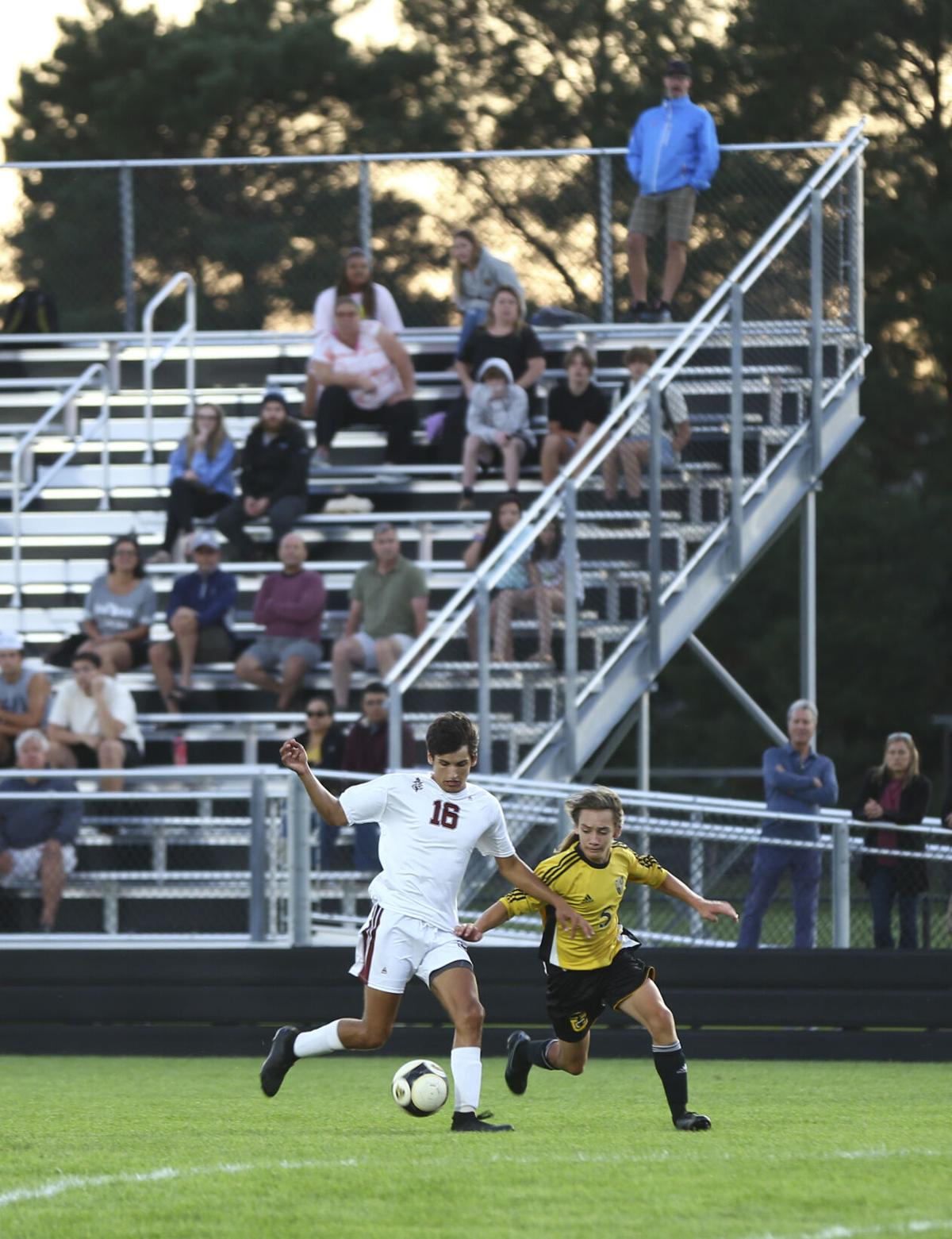 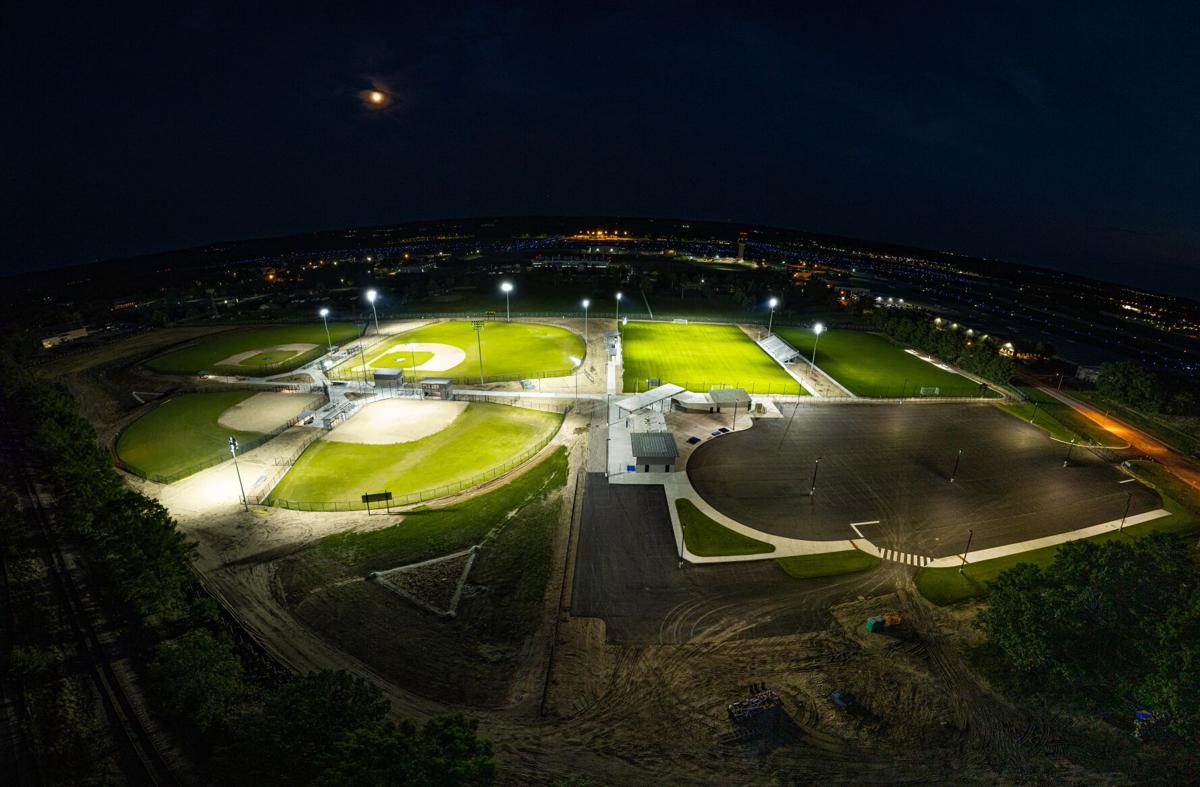 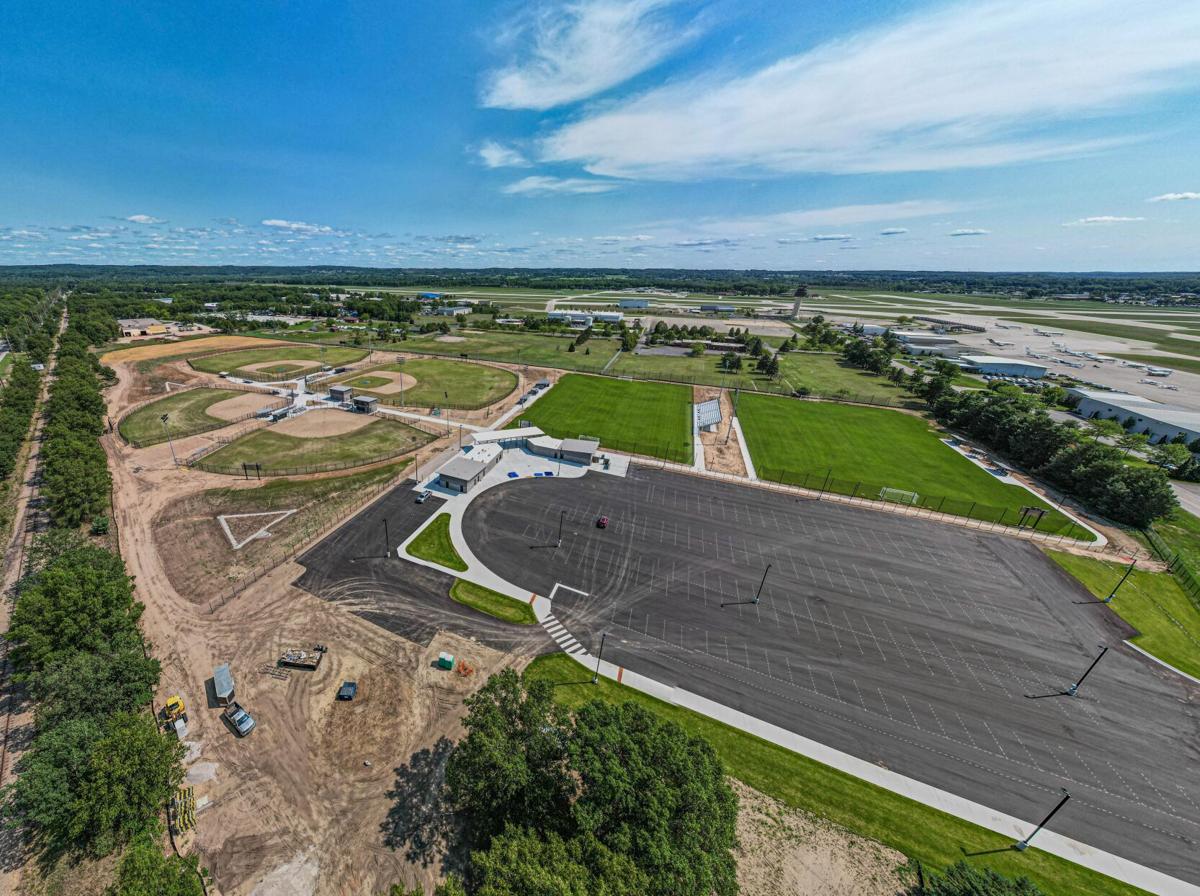 The Coast Guard Athletic Complex shown from an aerial photo in August.

Traverse City Central’s Asher Paul (9) chases down a loose ball at the Trojan Athletic Complex in Traverse City on Wednesday.

The Coast Guard Athletic Complex shown from an aerial photo in August.

TRAVERSE CITY — No Traverse City Central soccer player who stepped on the field Wednesday evening was alive when the work on what’s now the Trojans Athletic Complex began.

On Jan. 4, 1995, Rep. Bart Stupak of Michigan’s First Congressional District on behalf of Traverse City Area Public Schools introduced a bill to wrestle the 27 acres of land away from the U.S. Coast Guard through an act of federal legislation. Administrators contemplated multiple use proposals for the land, ultimately deciding on dedicating it to athletics.

The full vision for that complex opened Wednesday under floodlights, 26 years after the land transfer, and three years after a successful $107 million bond campaign that funded construction beginning in March 2020.

Senior soccer player Everest Noyes cut the ribbon to open the $8 million facility to play, and Traverse City Christian junior Henry Reineck scored the first goal. The Trojans beat the Sabres 2-1 under the lights with a crowd of about 150.

Noyes scored both of TCC’s goals.

“A kid doesn’t have to feel like maybe they’re not getting the same quality of environment educationally and athletically as a metro Detroit school,” said John VanWagoner, TCAPS superintendent. “We have everything here for the benefit of our kids that would match up to any of those schools.”

Traverse City Area Public Schools Board of Education trustees, state representatives, student athletes, and contractors who worked on the facilities attended the ribbon cutting ceremony. Eighteen sub-contracts were granted over the course of the project.

A similar project is on deck for Traverse City West Senior High with a bid planned for early 2022. Millions of the bond is earmarked for improving the athletic complexes at Central and West Senior High.

“We had soccer here before, but it really wasn’t ever what we ever meant it to be, we wanted more of a facility so Central had something for sports,” said Christine Thomas Hill, TCAPS associate superintendent for finance and operation. “It’s been a long time coming.”

TCAPS’ tax levies remained low following the bond, collecting 3.1 mills compared to the state average of 5.4. Traverse City voters said no to the bond in 2012 and 2013.

“I think the two failures really were on the heels of the 2007-09 recession,” Thomas-Hill said. “I just think at that point taxes were a struggle for taxpayers.”

The lights clicked in the blink of an eye as the clock turned to 8 p.m. They are special focus-LEDs (like a camping flashlight) designed to not interfere with nearby airplanes taking off and landing. Some of the ones on the baseball and softball field point slightly up so outfielders can pick out incoming fly balls.

The lights do not need to be primed, unlike stadium lights that could take up to 15 minutes to reach full brightness. When the internet is installed coaches will be able to control lighting from their phones by the use of an app at four brightness settings.

“They need to be more directional because we’re right next to the airport, we can’t have them shining up into the sky,” said Paul Thwing, TCAPS director of capital projects and planning. “Actually, each light pole out here has its own permit with the FAA.”

Oftentimes baseball and softball teams will run into situations where evening games can not be finished because they were so high scoring. It’s common for soccer teams to share the same fields as the school’s football fields.

Thorrington is the third AD to oversee planning for the multimillion dollar project, succeeding Mark Mattson and Zac Stevenson.

“It’s like ‘Here’s the keys to the Porsche. Have fun driving it,’” said Thorrington, who drove in from Saginaw to attend the opening ceremony and tour the facility.

Nate Alger, Grand Traverse County administrator and Trojans softball coach, said hosting such regionals double as a boon to the Traverse City economy. He’s been eating lunch in the parking lot once a week watching the construction progress.

“If you get district draws and regional draws we have teams that travel quite a ways for that kind of business,” Alger said. “They would need hotels, restaurants to eat and places to stay. So this is a premier facility that’s going to draw some attention and bring people into this area.”

Already the Trojans softball team had wide eyes with plans for their future home. Several members of the softball team talked about how deep the dirt was and how they would drag the field after practices.

“It’s just cool to have a place that we can call our own,” said sophomore softball player Daise Brewer. “Thirlby was a place for everyone, not just Central.”

Grass still is growing for the baseball and softball fields, as they are on track to be ready for the spring season. The soccer fields were sodded last year but the Trojans are not yet able to practice at the new field for now.

“I’m already pressuring the new athletic director to give us some Saturday night games under the lights,” TCC soccer Coach Chris Hale said. “Across America that’s where high school soccer is played, so I want that to be part of the tradition here in Traverse City going forward.”

Traverse City Central (3-2-1) hosts Glen Lake at 6 p.m. Thursday for the second game at the new facility. It's located just past the Parsons Road roundabout at 1033 Airport Access Road.