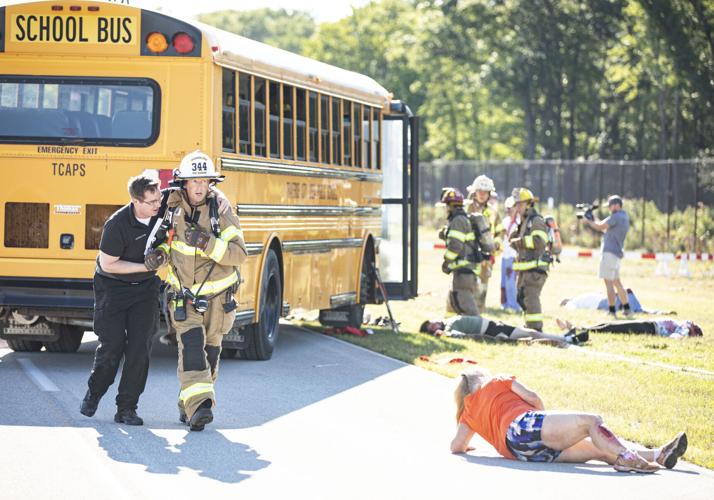 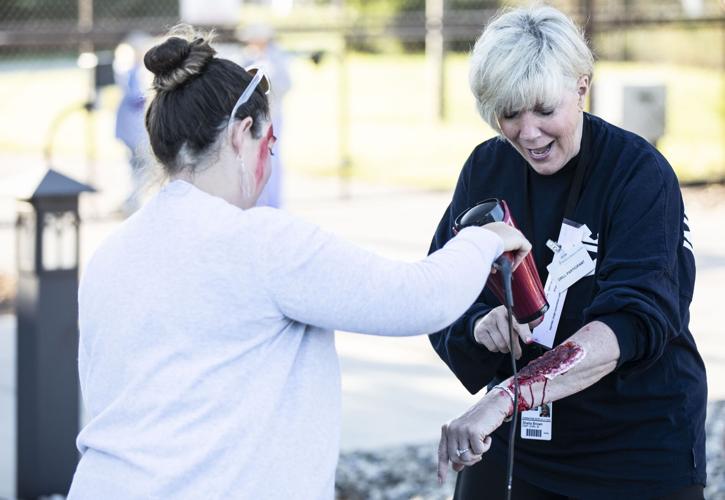 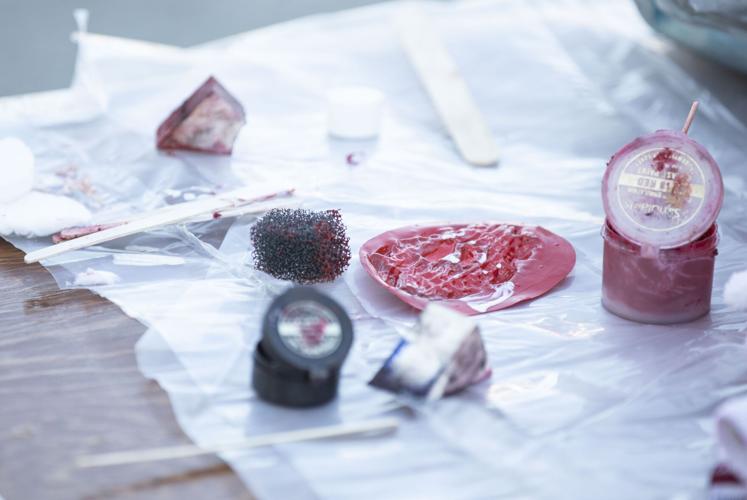 Cosmetic supplies used to simulate wounds sits on a table at Cherry Capital Airport in Traverse City on Wednesday. Volunteers simulated a variety of injuries during the full-scale emergency planning exercise. 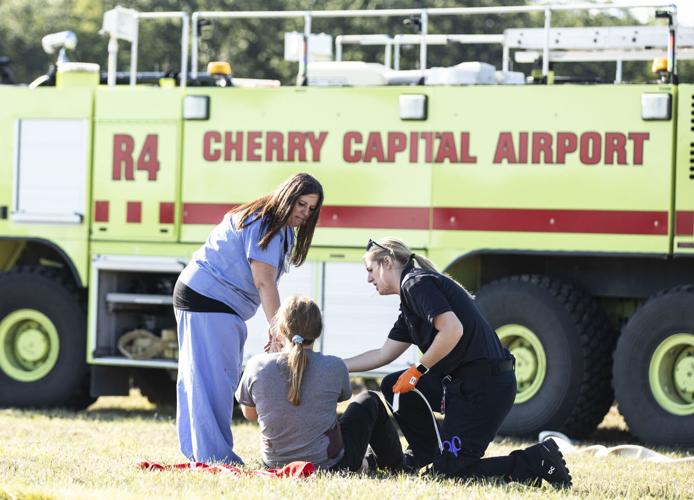 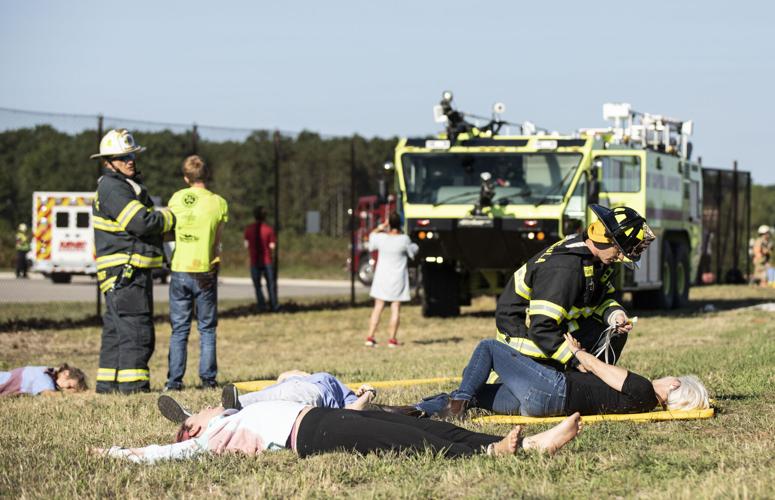 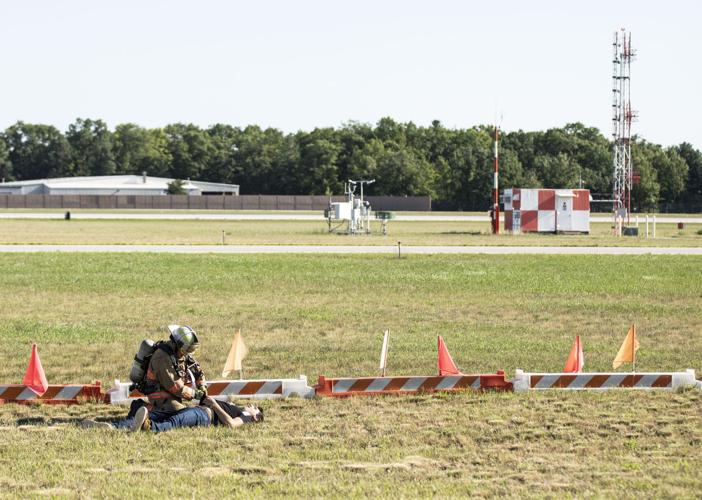 Cosmetic supplies used to simulate wounds sits on a table at Cherry Capital Airport in Traverse City on Wednesday. Volunteers simulated a variety of injuries during the full-scale emergency planning exercise.

TRAVERSE CITY — As a twin-prop plane readied for takeoff at Cherry Capital Airport, a crowd of people smeared with fake blood, makeup and other simulated wounds could be seen in and around a school bus not far from the runway.

Moments before, Randi Terry of Munson Medical Center’s emergency preparedness committee, walked around for a last-minute touchup to their moulage, as the mock gashes, cuts, bruises and more are known.

A little later, the volunteer victim actors writhed in pain, or walked around calling for help as an airport firefighting rig rolled up to the school bus. A few playing the walking wounded went to the truck’s driver door, asking the firefighter inside for help.

It might have been a horrific sight to the unsuspecting — one woman repeatedly called out for her character’s husband, with the two “reunited” on a blanket just outside the runway area’s fence line. Others continued to beg for help from the ground as firefighters assessed who needed it first, or those who wouldn’t survive.

But signs at the airport terminal and on the road to the staged crash scene itself let people know it was a training drill. Air traffic controllers let incoming pilots know, too, said Susan Wilcox Olson, the airport’s spokeswoman.

The overall scenario: a passenger plane crashed during landing after a drone flew in its path, according to Wilcox Olson and airport Director Kevin Klein. Authorities in the script initially suspected criminal intent or terrorism, even arresting the imaginary drone operator, but determined the user lost control of the drone, Klein said.

Traverse City Area Public Schools lent the bus that stood in for a plane, Klein said. The school district was one of numerous participating agencies and institutions, including city and Grand Traverse County law enforcement, county emergency management, the Federal Aviation Administration and more.

Behind the drama and occasional laugh was a gravely serious purpose.

City firefighters already cross-train as an aircraft rescue and firefighting force, as the department provides firefighting services by contract, Klein said. That includes a firefighter on site.

And the department’s personnel already put to work skills they would draw on in an actual crash, like extricating people from a mangled, burning vehicle, Tuller said. So too do neighboring fire departments train with Traverse City’s to respond to plane crashes.

What’s invaluable about an exercise like Wednesday’s is the chance to not only practice inside the airport’s secure area — he likened it to a different world — but with some of the actual emotion.

“I’d like to do one of these a year, I think they’re very valuable, and it gets also the responders in that stressful environment where they need to be able to operate,” Tuller said. “Your body can’t go unless your mind’s already been there.”

More than 30 minutes into the drill came an actual medical incident, or “real-world,” as a first responder called it over the radio. Firefighters and paramedics helped one of 25 or so volunteer crash victims onto a stretcher, and she held her hand to her forehead as they took her to a Mobile Medical Response ambulance.

She eventually refused any treatment after asking to drop out of the drill when she started feeling dizzy, Tuller said afterward. Volunteers are free to “tap out” if they need to, he added.

While plans for the drill always anticipate some actual emergency coinciding with the training, the moment wasn’t scripted, Klein said.

For the parts that were, white-vested inspectors milled around among first responders and actors to ensure everything went well.

Matt Ansorge was one inspector, and is Leelanau County’s emergency services director. He said he watched in case he had to stop anything egregiously unsafe or against protocol, and took notes to give constructive feedback on the rest.

For one, the various agencies — East Bay Ambulance, Grand Traverse Metro Fire and Peninsula Township Fire were among the long list — did well in coming on scene, establishing who should do what and then assessing the situation.

There was some confusion early on as first responders arrived, Ansorge said.

“They were able to overcome that and get people on scene,” he said.

That confusion is by design — not only were the actors calling out for help and frantically looking for others, Klein said the dispatch call gave the wrong number of passengers. Early radio traffic put it at 37, but that was corrected upward later to 55.

Fritz Breland, one of the volunteer victims, said the other volunteer calling for her husband was looking for his character. The script had her among the walking wounded after being ejected from the plane, while he remained trapped inside and paralyzed in the legs.

Seeing the first responders struggle to get Breland out showed him how difficult a job it would be, he said.

“It opened my eyes to just how difficult an event of this magnitude would be for everybody around,” he said.

Breland, who lives in Boynton Beach, Florida, is good friends with Terry, he said. She asked him to volunteer in a type of training that he had never done before.

Patricia Allen had never even heard of such a thing as wearing makeup to train first responders, she said. The retired attorney splits her time between Crystal Lake and West Palm Beach, Florida, and said she thought it would be fun to take part.

If the stress of the simulated crash, scripted or otherwise, felt too real, a daily scene of warm hugs between just-arrived fliers and the friends and family waiting for them offered bright relief between real affection and mock tragedy.