East Bay Township, along with Acme and Garfield, seek to regulate short-term rentals. 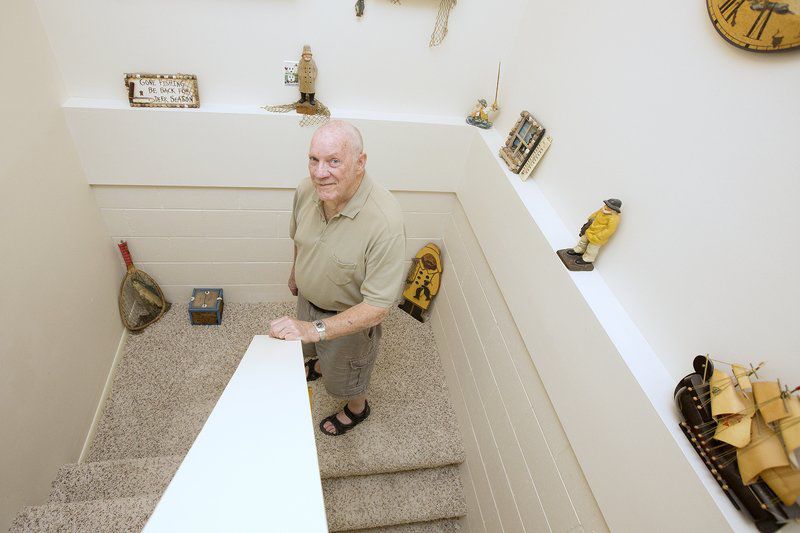 Top, East Bay Township, along with Acme and Garfield, seek to regulate short-term rentals. Above, Bill Murphy rents an efficiency apartment out of the basement of his condo in Acme Township.

East Bay Township, along with Acme and Garfield, seek to regulate short-term rentals.

Top, East Bay Township, along with Acme and Garfield, seek to regulate short-term rentals. Above, Bill Murphy rents an efficiency apartment out of the basement of his condo in Acme Township.

TRAVERSE CITY — Bill Murphy rents out an efficiency apartment near Grand Traverse Resort, occasionally for a week at a time but often longer.

He spent the past year welcoming carefully vetted guests into his rental property, a practice that recently has become a hot topic for zoning officials statewide. Now, Murphy is warily eyeing Acme Township’s efforts to adopt regulations for short-term rentals.

“It’s my house, and I ought to be able to do or have how or whatever in it, within reason where it’s not going to bother your other neighbors or other tenants, or things like that,” he said.

Acme Township isn’t alone in seeking to regulate short-term rentals. Those homes, many of which cater to vacationers, are scattered throughout the Traverse City area. Meanwhile another township faces a legal challenge to its efforts to enforce its ordinance barring short-stint rentals.

Five couples and a sixth person are suing Garfield Township for threatening to enforce its ordinance, according to the complaint. They all own property near Silver Lake and have rented out homes or cabins prior to the township adopting an ordinance barring short-term rentals in 2015.

They cited a letter then-township Planner Jim Reardon sent to two other township residents in 2013, stating short-term rentals are allowed in certain instances, according to legal filings.

Attorney Joe Quandt represents the property owners, and said they should be able to continue renting as a nonconforming, legal use. But the township sent them all letters in 2015 threatening enforcement, and sent at least one property owner a few more — the township has yet to actually take enforcement action.

“So we’re asking the court to make essentially a declaratory ruling, basically interpreting the ordinance and saying our clients are not subject to the ordinance because of their nonconforming use status,” he said.

The property owners still rent to vacationers, although less than they did before, Quandt said.

Garfield Township Supervisor Chuck Korn said he was unaware of the lawsuit, but said short-term rentals have never been allowed in the township. He said Reardon erred in his interpretation, although there are a few exceptions.

“There are people on the lake who are grandfathered, they’ve literally been leasing and renting their properties as a resort since, as far as we can tell, before there was zoning,” he said.

The suit lands as other townships in Grand Traverse County mull new regulations for short-term rentals.

“We just haven’t decided exactly what that is yet,” he said, adding trustees will take up the issue again at their Oct. 3 meeting.

East Bay Township trustees will consider a draft ordinance that requires short-term rental owners to obtain a license. It also limits occupancy to two guests per bedroom plus four more people, establishes safety standards for rental properties and sets other rules aimed at curbing impacts on neighbors. Rentals wouldn’t be allowed where barred by deed restrictions, bylaws or association rules.

Township planning commissioners voted to recommend the ordinance at their July 11 meeting. They did so after several commenters spoke, some pleading with the board to avoid over-regulating short-term rentals, others recounting horror stories of obnoxious renters making nuisances all summer long.

The issue came to light about a year ago, township planning commission Chairman Robert Tubbs said. Residents complained of noise and other issues caused by short-term renters.

At the same time, rental property owners told township leaders they’d like to keep renting, Tubbs said. And there was no legal basis in the township to do so. So planning commissioners set out to reach a compromise, one Tubbs believes they’ve found in the draft ordinance.

“There may be residents on both sides of the issue who would’ve liked it more their way as opposed to another, but ultimately, I think we struck a good compromise,” he said.

Connie Spence would just as soon see no regulations at all, she said. The Bear Lake resident owns a house in East Bay Township she rents to vacationing families who find it more economical than hotels. She bought it about three years ago to tap into the market around Traverse City.

Spence has never had a neighbor complain about her property, she said. She believes they’re better off, because owners of rental properties have to keep them in good shape to attract visitors.

“I mean, if you have some place that’s a continual problem, OK then, maybe address that one place,” she said. “But don’t penalize everybody.”

Short-term rentals are a hot topic nationally, Ken Kleinrichert said. The past president of Traverse Area Association of Realtors said he’s heard from other area association presidents at both the Michigan Realtors Convention and the National Realtors Association. It’s been the topic of seminars as well. Concerns over the practice, brought to a head by online listing sites like Homeaway.com, prompted the national association to publish a white paper on its pros and cons.

Kleinrichert also owns a property in East Bay Township he rents out by the week or weekend, he said. He’s been attending meetings for township boards that are considering ordinances of their own, urging them to keep it simple.

“East Bay, I think, is turning out to be a pretty good poster child for what a common-sense ordinance looks like,” he said.

A proposed tweak to the Michigan Zoning Enabling Act could limit how local governments regulate short-term rentals. State Sen. Joe Hune, R-Hamburg Township, and state Rep. Jason Sheppard, R-Temperance, introduced identical bills in April that would declare short-term rentals as a residential use permitted in all residential zones. It wouldn’t bar noise or other ordinances that apply to other residences as well.

That doesn’t sit well with Zollinger and Korn. Both said it goes against townships’ long-held ability to establish their own zoning.

“When they do it at a legislative level, they’ve taken that right away from us to manage that appropriately,” Zollinger said.

Zollinger and Korn also noted the bills seem to have little chance of passing — neither has any cosponsor, nor have they advanced past their respective committees since April.

Tubbs said the bills may not impact a police power ordinance like what East Bay Township is considering.

“I feel like you can’t have the wild west out there,” he said. “It’s got to be realistic, and I feel like a good ordinance is the best way to handle it for both sides.”

TRAVERSE CITY — Dave Durbin figured his days as an Airbnb.com host were over when Traverse City's zoning administrator sent him a cease-and-de…