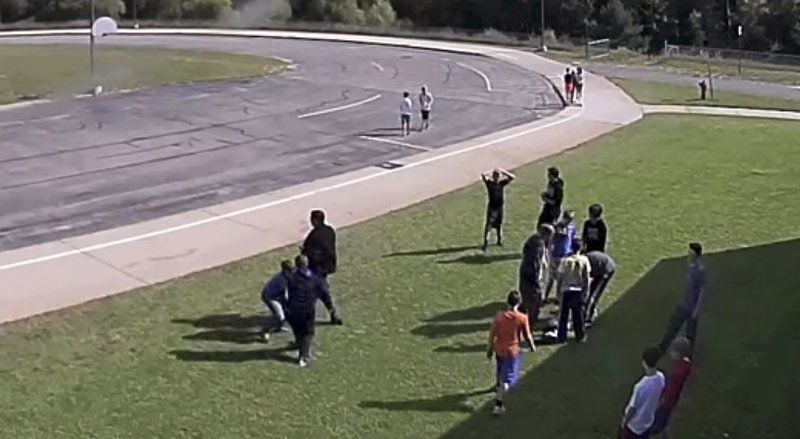 Special to the Record-EagleThis still capture of East Middle School surveillance camera footage shows a group of seventh- and eighth-grade students engaged in a game of keep-away that got out of hand. The Record-Eagle posted the full video online in late September. Many TCAPS residents who viewed the clip criticized how district officials handled the situation at the time, and how they characterized it after the fact. 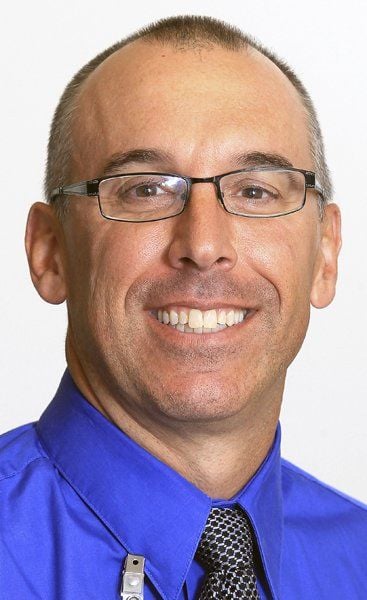 Special to the Record-EagleThis still capture of East Middle School surveillance camera footage shows a group of seventh- and eighth-grade students engaged in a game of keep-away that got out of hand. The Record-Eagle posted the full video online in late September. Many TCAPS residents who viewed the clip criticized how district officials handled the situation at the time, and how they characterized it after the fact.

But the same law — the Family Education Rights and Privacy Act, commonly known as FERPA — didn't stop TCAPS officials from releasing copies of the same surveillance tape to two parents. One of those parents, Natalie Tersigni, said district administrators also disclosed to her how they disciplined other students following the keep-away game that she said injured her 12-year-old son.

The Record-Eagle received a copy of the tape from Tersigni and posted it on www.record-eagle.com in late September. Tens of thousands of people watched the video, and many district residents criticized TCAPS administrators' handling of the incident, particularly comments by Soma.

In addition to calling the incident "blown out of proportion," Soma also said, "Frankly, it's not that worthwhile of an incident."

In the wake of that backlash TCAPS officials denied the Record-Eagle's FOIA request and said they would not publicly release the Sept. 18 security footage — or any other security video —  because they consider such videos as protected student records.

Soma said the tape's release to the parents was an effort to be "transparent" with parents of students involved in the incident.

"There isn't another word for it," he said. "We were trying to be transparent with the people who expressed concern about the incident."

But Robin Luce-Herrmann, a Michigan Press Association attorney, questioned that logic. If district officials indeed sought to be transparent, they could have used such a stance to justify releasing the tape, either in whole or in part, to the wider public.

"There’s a concern here that their application of FERPA is over-broad in a bunch of ways," Luce-Herrmann said. "First of all, it’s surveillance footage, that’s not an educational record, generally. If their position is that some of it is pertinent to a disciplinary action and therefore an educational record, you’re only talking about a portion of the video. In that case at least a portion of the video should be released, because FOIA requires the separation of exempt material."

Education is the most important function of government for many people, Luce-Herrmann said. School boards are locally elected, millages are local ballot issues and school board meetings are often the most well-attended of any local government meetings.

"That speaks to the level of interest, and accountability and transparency are crucial for good government," she said. "With an overly broad application of FERPA, that means information is not being made available to the public."

Record-Eagle Publisher Neal Ronquist said it's important for the public to have access to school surveillance video, in the recent case and potentially in the future. The Record-Eagle's posting of the video allowed local parents and taxpayers to view the East Middle School incident and make their own decisions without solely depending on Soma's version of events, he said.

Ronquist said TCAPS officials appear to want to prevent a repeat of the public outcry prompted by Soma's comments by barring public access to surveillance video, and they could be twisting FERPA rules to fit their stance.

"TCAPS officials are acting in anything but transparent fashion," Ronquist said. "Many local parents did not agree with Paul Soma's description of the incident, but they couldn't have reached that conclusion without access to the surveillance video."

The Sept. 18 video showed Tersigni's son Anthony Ramirez pick up a football during the keep-away game. He then was swarmed by several seventh- and eighth-grade students, while East Middle School Assistant Principal Marcus Mead sat nearby with his back turned as the game escalated.

The footage depicts roughly 10 students standing around Ramirez while he's prone on the ground. Some students appear to kick Ramirez. Some yanked off his shoes and hurled them away. Some pulled the hood of his sweatshirt over his head. Others watched the events unfold.

Tersigni contended school officials downplayed the incident's severity. She said her son suffered internal injuries, but a police report about what transpired listed Ramirez's injuries as minor. Grand Traverse County Prosecutor Bob Cooney reviewed the case and determined the incident did not rise to the level of a crime.

TCAPS officials initially said a Record-Eagle reporter could obtain a copy of the tape. Later they said the reporter could view the tape while they processed the newspaper's FOIA request. Ultimately they denied the records request.

Before the video appeared online Soma said Tersigni's concerns were "blown out of proportion" and "not that worthwhile of an incident," comments that sparked a backlash against him on the Record-Eagle's Facebook page. Soma subsequently apologized.

Tersigni said she "absolutely" believes a prior tense encounter between her family and Soma influenced how the district's leader handled the East Middle School situation. She said the previous incident took place when Ramirez, then in third grade, played on a basketball team Soma coached. Tersigni said her father, Ramirez's grandfather, took issue with how Soma handled a situation on the court involving Ramirez, and the two men had a heated argument.

“Ever since then he’s been very rude to me, very short with me," she said.

Soma this week said he recalled the incident differently but declined additional comment.

Tersigni said East Middle School Principal Colleen Smith visited her after the schoolyard incident to apologize for what happened to her son. Smith then gave Tersigni a copy of the tape.

Soma said Smith did not err when she released the video to Tersigni without parental consent from the other students shown in the tape.

She had a right to view the tape because the incident involved her son, Soma said. The district also did not need to worry about concealing the other students' identities or getting their parents’ permission because Tersigni already knew who they were.

“Those were the friends of her son,” Soma said. “Those students were already identifiable to her."

Both Luce-Herrmann and Aimee Alaniz, a school safety consultant with the Michigan Department of Education, said that's generally not how FERPA works.

Alaniz said school officials need written consent to release what they classify as education records to third parties, or they need to redact any personally identifiable information contained in the record before it's released.

"It doesn't matter what their prior knowledge was of who is involved," she said.

Luce-Herrmann said she's not aware of any FERPA provision that states a person's prior knowledge of who an educational record pertains to grants them access to that record.

"And in fact I've had educational institutions take the exact opposite stance," she said. "So I don’t think (TCAPS officials) are being consistent, first off with the point 'you already know, so there’s no harm.' That doesn't make sense to me."

A second parent's prior knowledge

Josh Wuerfel, another parent whose child was involved in the East Middle School incident, sent an email message to school principals Smith and Mead on Sept. 22 — two days before the Record-Eagle posted the video online — to formally request a copy of the video.

Wuerfel, who declined comment for this story, wrote that his attorney advised him to obtain a copy of the surveillance footage, which he'd already watched in Mead's office Sept. 19.

"Thank you in advance for the video based on FOIA," Wuerfel wrote.

Mead wrote back with a promise to "immediately" create a copy of the video for the Wuerfels.

Soma said TCAPS officials released a copy of the tape to Wuerfel without written consent of other parties involved or redactions of students' identities because he, like Tersigni, already knew all the students involved.

But Wuerfel emailed Smith, Mead and Associate Superintendent Sander Scott on Sept. 25, the day after the Record-Eagle posted the video, and stated he believed Smith violated his child's educational privacy rights when she released a copy of the tape to Tersigni and discussed school administrators' disciplinary actions in the wake of the Sept. 18 incident.

Tersigni said officials told her about disciplinary actions taken against several students on Sept. 19, the day after the school yard incident.

"Based on the Record-Eagle article, Ms. Smith violated ... FERPA rights with giving out the video on the first night ... with information on what punishment was (will be) given out," Wuerfel's email states.

"All that is protected under FERPA," he said.

TCAPS emails obtained by the Record-Eagle through FOIA show Soma in early October organized a meeting of top TCAPS administrators to discuss the Record-Eagle's request for the video.

An email from Soma to the district's top administrators included the subject line "emergency discussion" and states the "issue of our FOIA request is at a very high level."

Notes from the ensuing meeting on Oct. 2 suggest TCAPS officials, at least briefly, wondered aloud whether their initial handling of the East Middle School security footage amounted to a FERPA violation.

"We have to say in some way shape or form that we violated FERPA," TCAPS officials' notes read. "Falling short of that it looks like we are trying to cover up. Today we have to say that."

Soma said he did not know who at the meeting made those comments, but he said officials were concerned at the time that they violated FERPA because releasing the tape to Tersigni, whom Soma maintained has a right to access the record, was nonetheless one link in a chain of events that led to the video appearing online.

TCAPS administrators since dismissed that concern as they've learned more about FERPA, Soma said. He added the meeting minutes are only a reflection of discussions taking place during the meeting and do not represent any formal decisions or district stances.

"But I think what you can see in our notes is an organization learning from its actions," he said. "And that’s what this situation is. And it can be painful to learn, but we are learning."

Soma said TCAPS officials' biggest change in their understanding of FERPA came from a 2010 opinion penned by former Attorney General Mike Cox. Soma paraphrased the opinion as stating "that videos of children maintained by a school system are considered educational records and therefore subject to FERPA."

"So read that, and that's what we learned," Soma said.