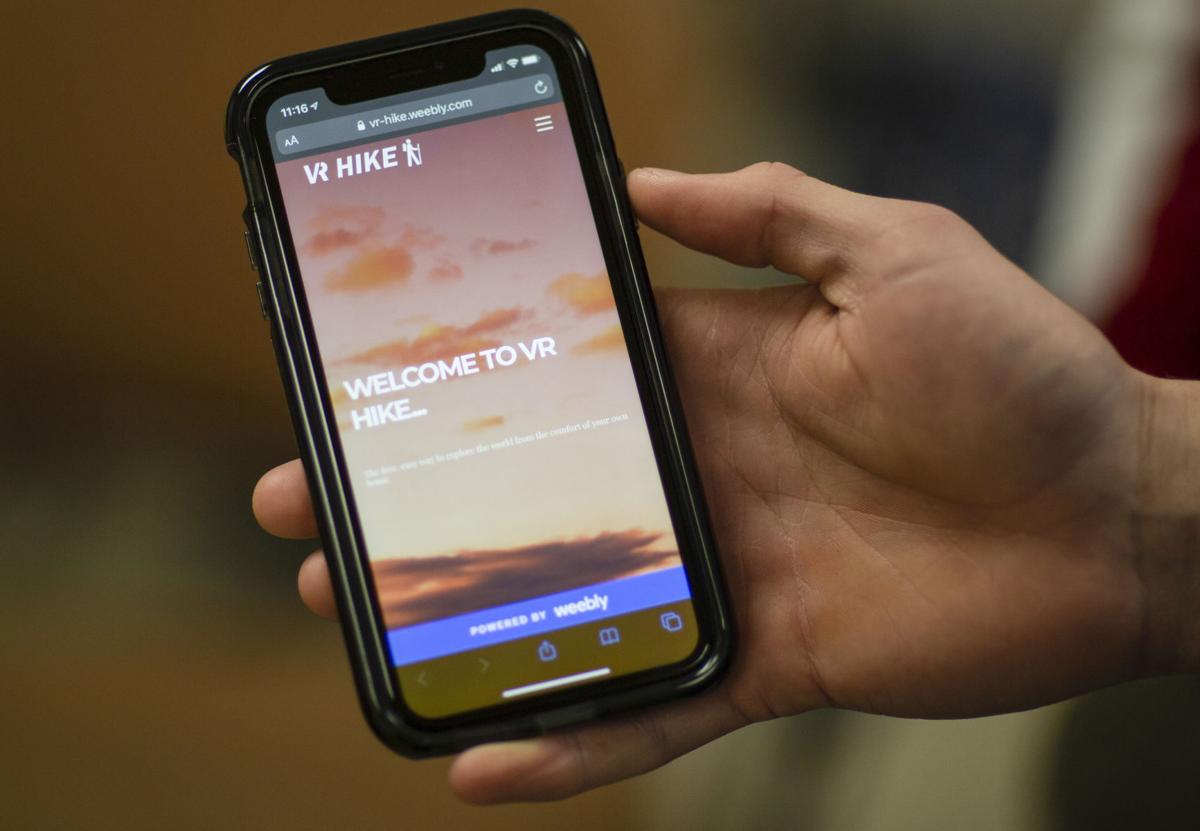 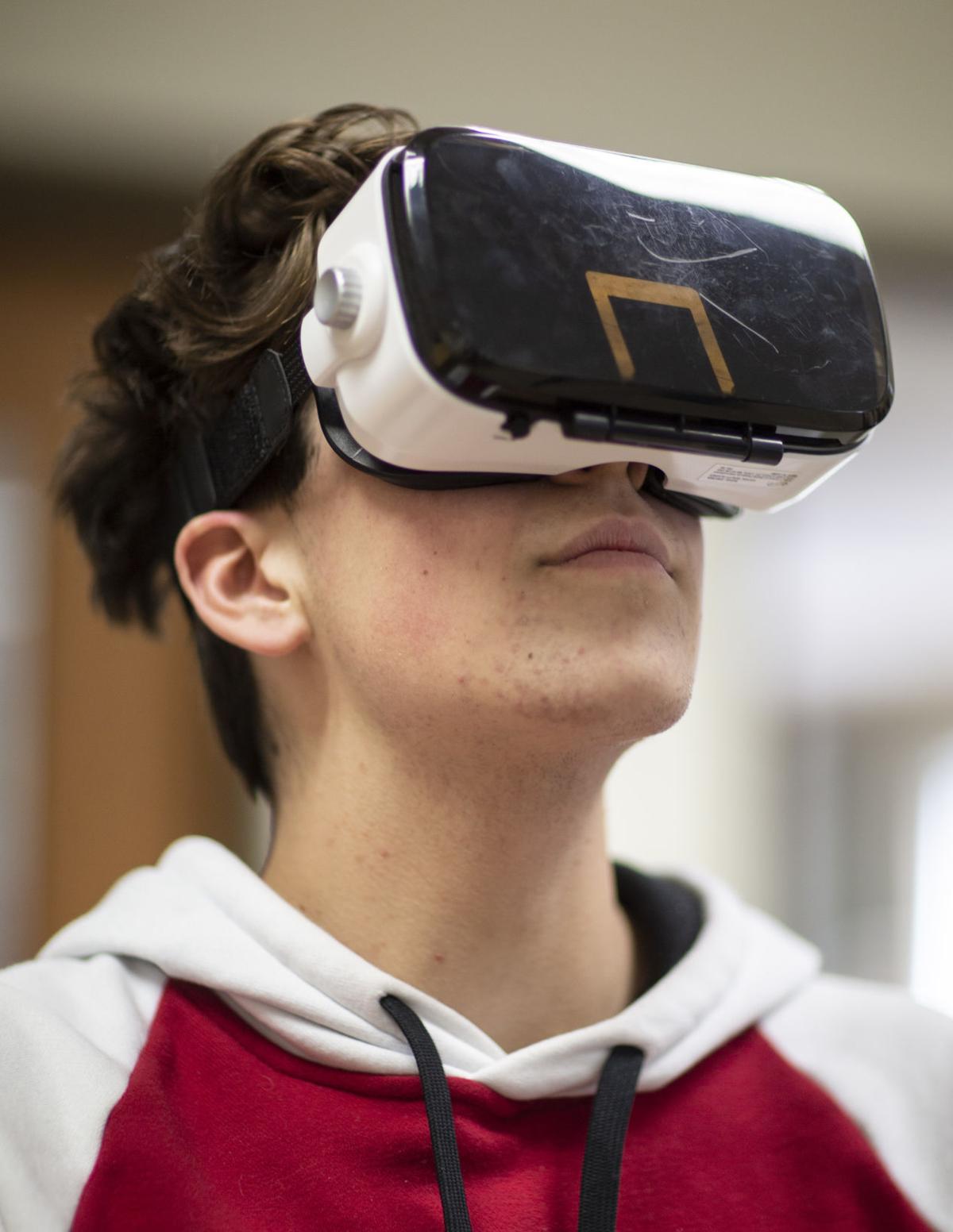 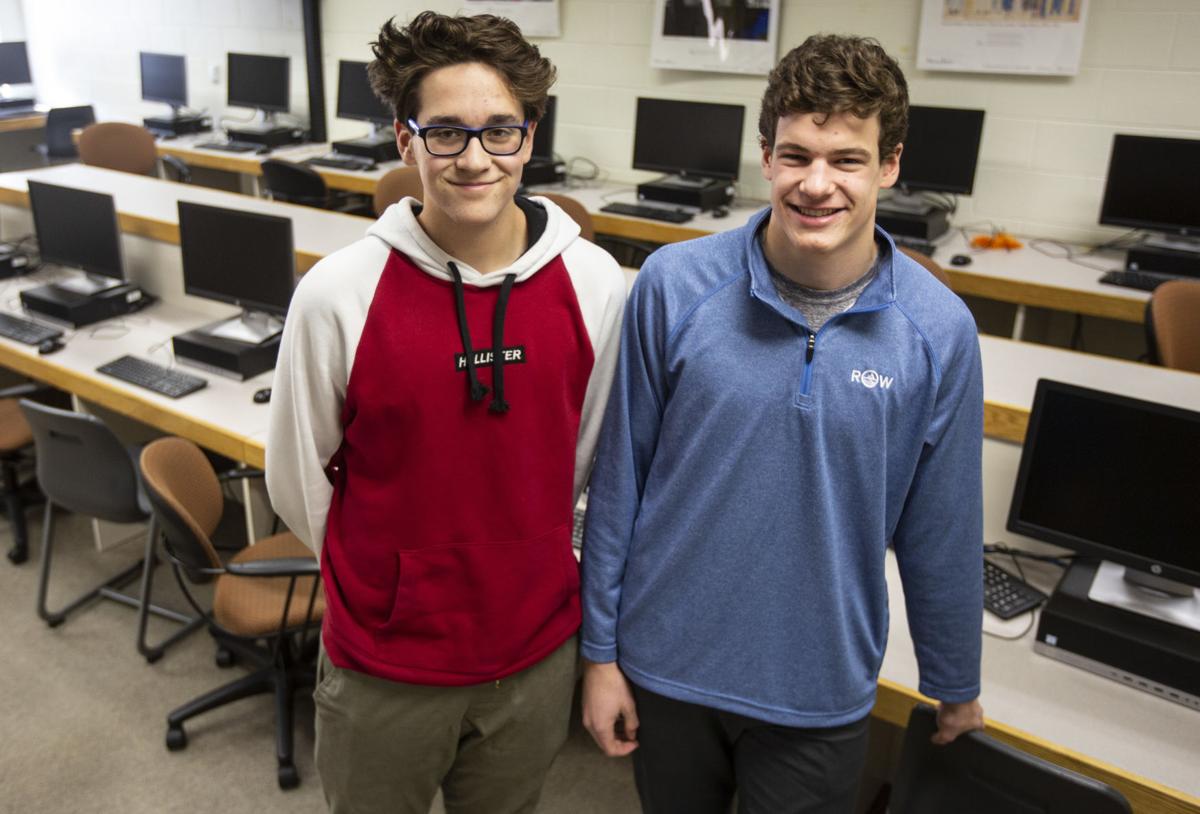 Seniors Zakary Miracle and Garrison Waugh pose for a portrait at Elk Rapids High School in Elk Rapids on Thursday. Miracle and Waugh created V.R. Hikes, which is comprised of virtual reality hikes. 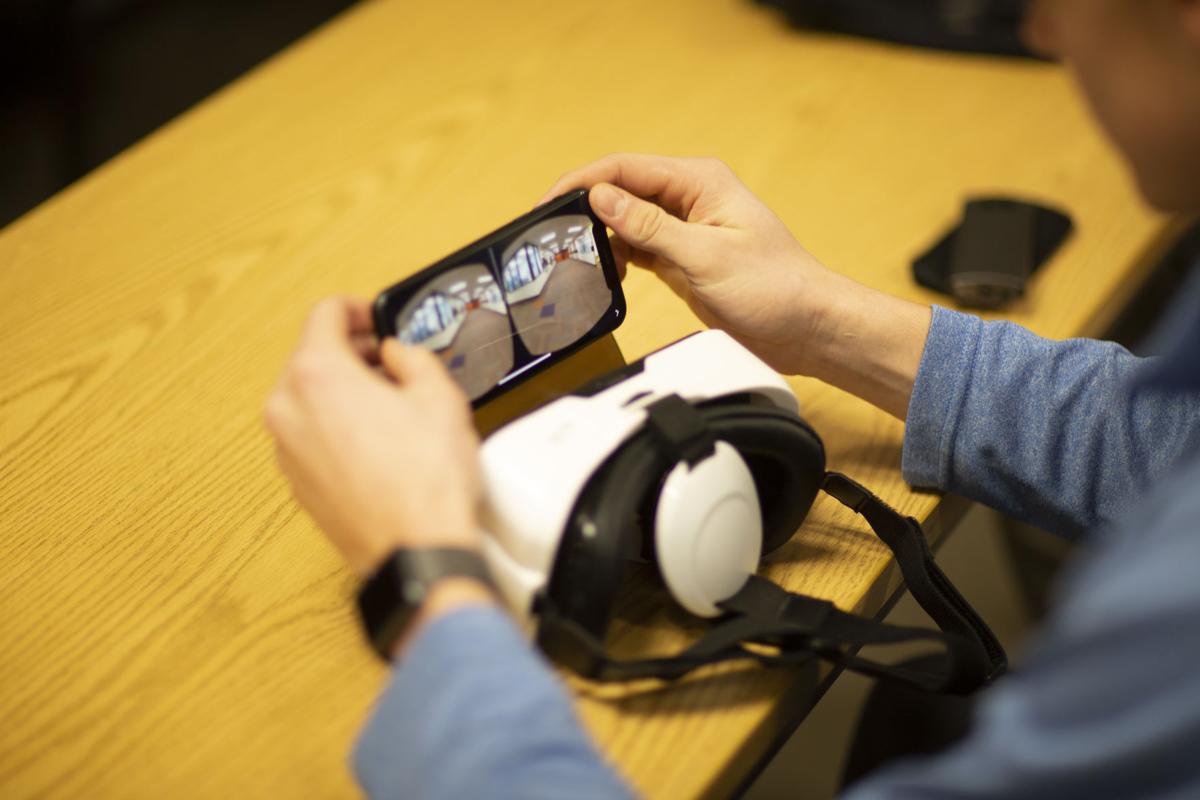 Garrison Waugh prepares a V.R. hike on his phone at Elk Rapids High School in Elk Rapids on Thursday.

Seniors Zakary Miracle and Garrison Waugh pose for a portrait at Elk Rapids High School in Elk Rapids on Thursday. Miracle and Waugh created V.R. Hikes, which is comprised of virtual reality hikes.

Garrison Waugh prepares a V.R. hike on his phone at Elk Rapids High School in Elk Rapids on Thursday.

ELK RAPIDS — Take a trek to Skeleton Point on the South Kaibab Trail along the Grand Canyon in Arizona.

Head to California and make your way to the Bridge to Nowhere or Potato Chip Rock. Find yourself atop Mother Miguel Mountain in Ohio or in the caves of Natural Tunnel State Park in Virginia.

Or if you’re feeling mighty adventurous, go to 308 Meguzee Point Road in Elk Rapids and get lost in the hallways of Elk Rapids High School.

All are possibilities from the comfort of your home due in large part to the work of two students who walk those halls.

Zak Miracle and Garrison Waugh, both seniors, spent the better part of this school year developing a way for people to take virtual hikes in dozens of locations across the United States. Their work can be seen at vr-hike.weebly.com, where they’ve partnered with Treadmill TV and HikingGuy.com to provide more than 50 hikes in five states.

“It’s been a lot of experimentation so far,” Waugh said.

Waugh and Miracle said the inspiration to venture into such a project occurred to them in similar ways but in different parts of the world.

Waugh said his breath was taken away when he reached the summit of the Kuliouou Trail in Hawaii and was given a full 360-degree view of the island.

“That’s where it sparked for me,” Waugh said. “I was thinking about how many people will never get that experience in their life. They’ll never be able to get out and see the beauty and nature.”

Miracle had the same a-ha moment while touring Yosemite and Yellowstone national parks.

“Seeing everything and being able to take everything in was so beautiful,” Miracle said. “Knowing some people can’t do that really opened my eyes that we should do something.”

The two talked last year about doing a science project together. Miracle said the original intent of the project was to provide a way for people with ambulatory disabilities or issues with their limbs the chance to experience these hikes. Mary Free Bed Rehabilitation, in partnership with Munson Medical Center, have since reached out to Miracle and Waugh to see how they could work together to make that goal a reality.

“Allowing them to be able to view all of these great sights is really what this all about,” Miracle said.

“I am extremely proud of the creativity, commitment and enthusiasm demonstrated by Garrison and Zak. They are both amazing students that are well on their way to becoming innovators and problem solvers of the future,” she said. “What began as an idea for an independent study project has slowly become a design reality that will have a positive impact on society.”

The process itself is rather simple.

Those interested can go to Miracle and Waugh’s website, browse the map for hikes, pull up the video on their smartphone and — if they have one — pop the phone into their virtual reality headset and start the trek. Waugh said they are hoping to develop an app to go along with their project.

The first “hike” the duo created themselves was of their high school.

Miracle said it began with propping a 360-degree camera on a prototype of a helmet they designed and built. They’re now working on trying to secure funding for a gyroscope stand for the camera to keep it level, and they hope to move out to the famed hiking trails in northern Michigan and record hikes at places such as Sleeping Bear Dunes.

The two are set to present their project at TCNewTech in March with the hopes of winning the $500 prize, which Miracle said would be enough to get them moving on the next phase of the venture.

“It was a passion project,” Waugh said. “We’re hoping that it just continues to grow.”

Editorial: Next best thing to being there