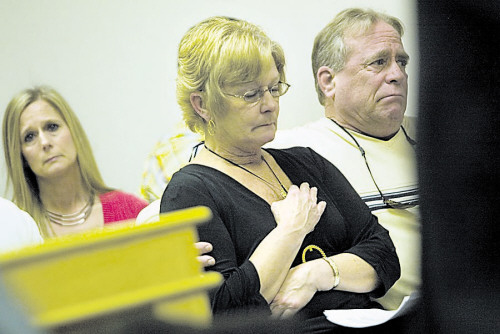 Donna and Brian Hart, parents of Dawnette Harrell, sit in court during the sentencing of Justin Stair. 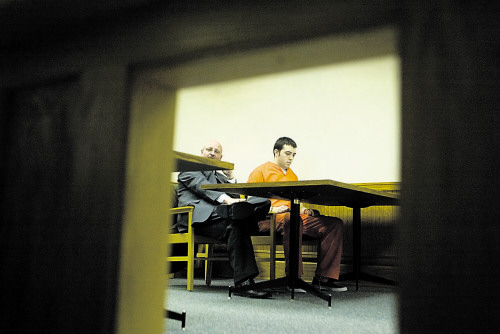 Justin Stair was sentenced to life in prison for the murder of Dawnette Harrell Monday in 13th Circuit Court.

Donna and Brian Hart, parents of Dawnette Harrell, sit in court during the sentencing of Justin Stair.

Justin Stair was sentenced to life in prison for the murder of Dawnette Harrell Monday in 13th Circuit Court.

Hart turned and faced Justin Stair, who sat bound in chains next to his attorney. Her voice boiled with rage and grief as she admonished him for murdering and burying her daughter, Dawnette Harrell.

"You're a monster, Justin," she said through tears as she read from a prepared statement at Stair's sentencing. "You let my daughter rot face-down for over a year, and you did it all within the sight of your house."

Stair, his face devoid of emotion, stared at Hart as she spoke for a few minutes about her family's pain.

A jury last month convicted Stair of first-degree murder and assault of a pregnant individual causing death or miscarriage of a fetus. Circuit Judge Thomas G. Power sentenced him to life in prison without parole, the mandatory sentence for a first-degree murder conviction.

Power also sentenced Stair to a minimum of 18 years in prison on the assault charge and ordered him to pay nearly $5,000 in restitution. The restitution is for funeral expenses for Harrell, Grand Traverse County Prosecutor Alan Schneider said.

Stair gave Hart a quick nod when she finished. He declined to speak when Power gave him that chance.

Defense attorney Robert S. Hackett and Schneider both said they expect Stair to appeal. A member of Stair's family called out "It's not over," as deputies led him from the courtroom after the sentencing.

"This is a tragedy," he said. "This is tragedy for Dawnette's family, and it's also a tragedy for (Justin Stair's) family. My heart goes out to all of you."

Authorities found Harrell's body in a shallow grave in May 2007 near the Whitewater Township home where Stair lived with his parents. She had been missing since April 2006, when authorities say Stair shot and killed her.