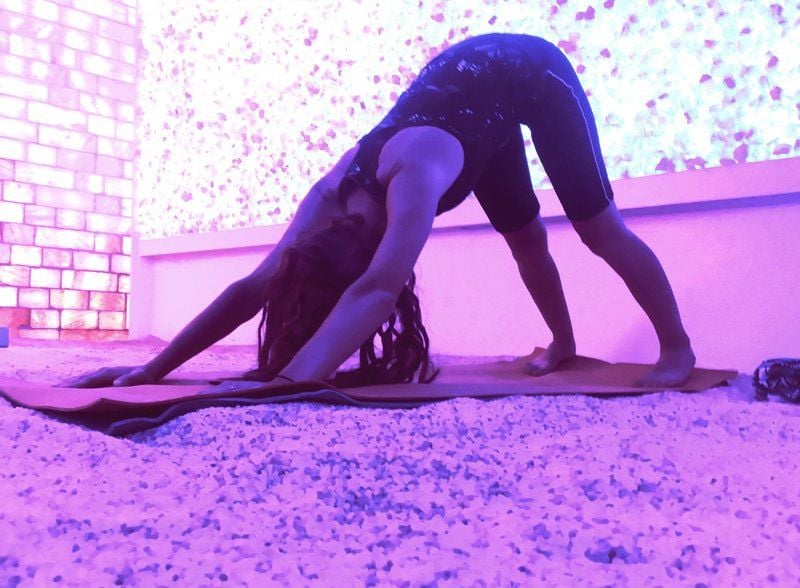 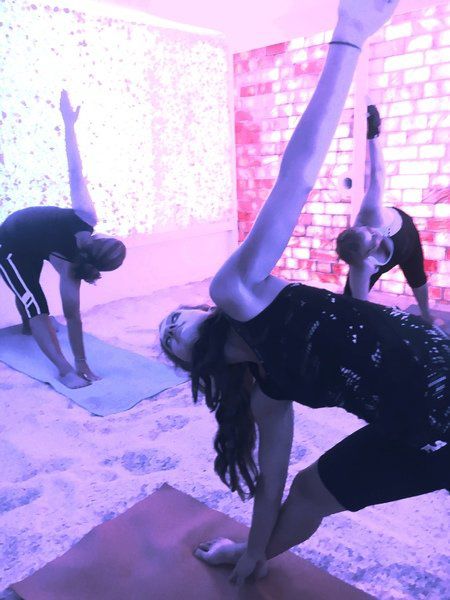 Record-Eagle photos/Brooke KansierEmily Feaster, front, and Bev Ferguson, left, are talked through a pose by teacher Rolinda LeMay, right. LeMay leads yoga classes in the salt room of Urban Oasis Salt Spa. She says the salts are calming and lend well to activities like yoga and meditation. 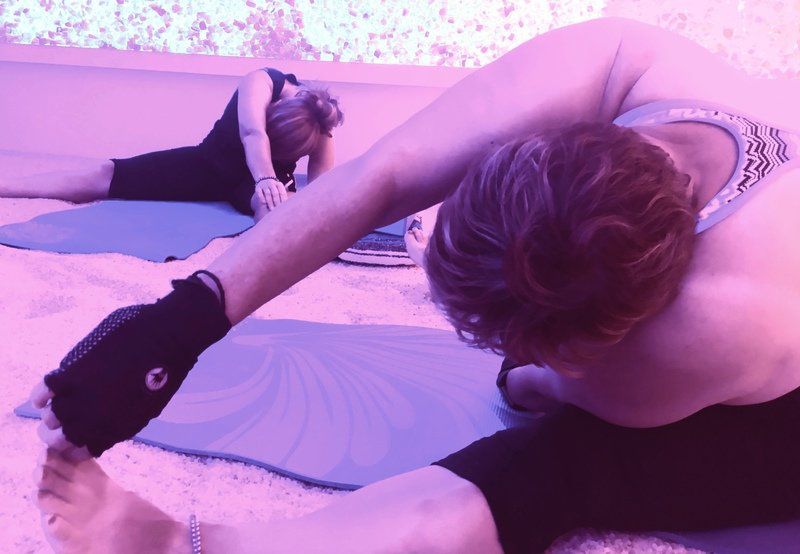 Record-Eagle photos/Brooke KansierEmily Feaster, front, and Bev Ferguson, left, are talked through a pose by teacher Rolinda LeMay, right. LeMay leads yoga classes in the salt room of Urban Oasis Salt Spa. She says the salts are calming and lend well to activities like yoga and meditation.

TRAVERSE CITY — The smell of salt calls forth ocean surf. Soft, flickering lights mimic a beachside campfire and if you close your eyes, the salt floor underfoot is coarse sand.

Rolinda LeMay takes a deep breath and calls out the next pose.

The certified yoga teacher leads classes a few times a summer — and regularly in slower seasons — in the salt room of Urban Oasis Salt Spa.

It’s not your typical yoga class — each session runs concurrent with a cycle of Himalayan salt-infused air.

“They say the amount of salt is equivalent to going down to the seashore three days in a row,” LeMay said.

The spa room features Himalayan salt lamps and a floor of 14,500 pounds — about three inches — of salt. The odd twist on yoga has proven popular since Urban Oasis opened last year.

She said she noticed the salt’s effects in her breathing and that her sinuses felt clearer in the room.

That’s the hope, said Carol Saxton, who owns and runs the store with her husband Dave. She said the salt sessions help clear the lungs, promote good moods and can even help with some skin conditions.

It’s a form of halotherapy — literally, salt therapy — growing in popularity in the United States. Research hasn’t uncovered any concrete evidence that halotherapy has any major health benefits, but that hasn’t stopped early adopters. A 2014 survey in Poland found that, of 300 salt room attendees, 93 percent said they felt better and more relaxed after a session.

LeMay compares it to the saline treatments she used to give her children for their allergies, and Saxton says the salt has anti-inflammatory, antimicrobial and antibacterial properties.

“It pairs really well with yoga for the breathing, and also meditation,” Saxton said. “It’s just good for general relaxation, for stress and anxiety.”

Customers like Marinoss agree, and Urban Oasis easily fills its small yoga class roster in the off season. The salt room can only fit about nine adults. It’s not just the air — LeMay said that balancing on the salt room floor adds a challenge to the class by forcing attendees to use different muscle groups to stay steady.

LeMay’s class is a mix of challenging and relaxation-focused. Salty Yoga, as she calls it, follows a bell curve of activity, starting slow with stretches and moving into a vinyasa flow that grows in difficulty. The class slows with a second stretching session and ends with a meditative final shavasana.

“You move from one yoga asana to the next,” LeMay said.

The class is conducted in one of Urban Oasis’ two halotherapy rooms — the other is intended for children. Both rooms sit around 74 degrees to promote comfort and keep muscles loose for classes.

The shop also hosts music events and meditation sessions in its salt rooms, and both spaces can be rented out for groups.

Saxton says the spa hosts singing bowls at least once a month, and conducts events like Native American flute performances.

Yoga and meditation sessions, though, are among the shop’s most popular offerings.

“There’s just a feeling of wellness you get from inhaling the salt air,” LeMay said. “Like being on the seashore.”