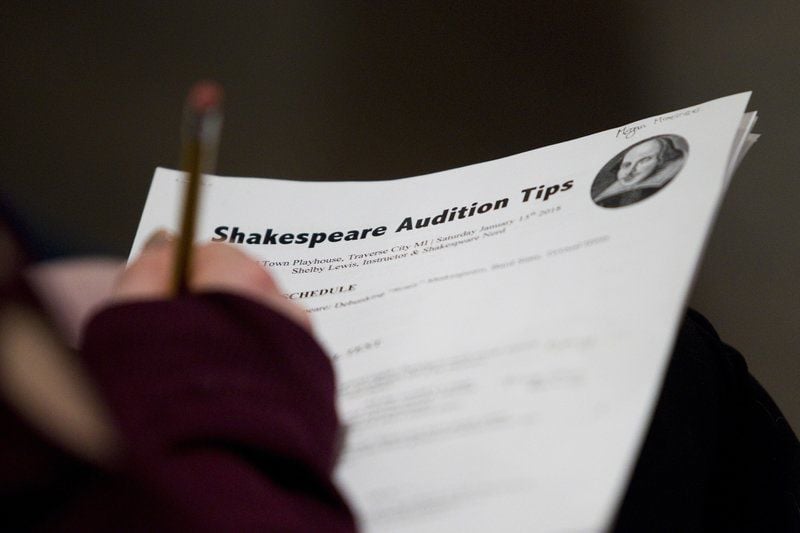 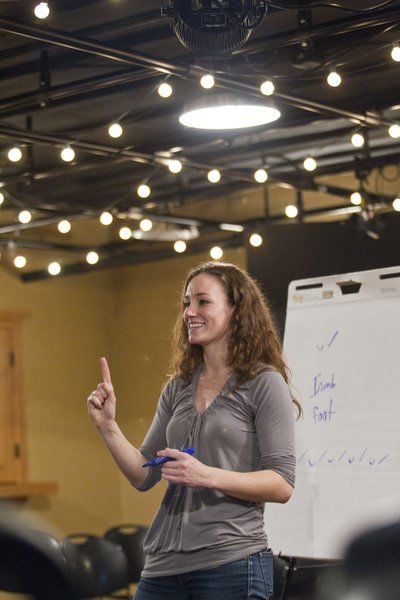 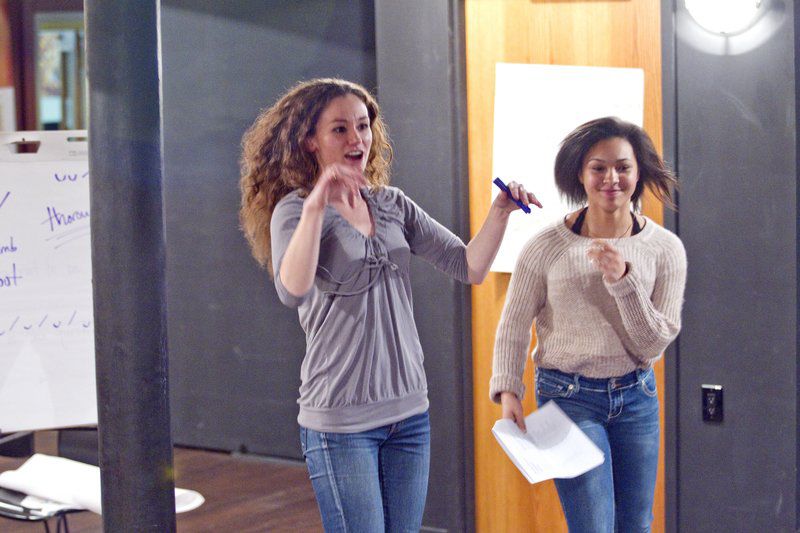 Shelby Lewis, left, and Skye Martin, 14, gallop to the rhythm of lines from Shakespeare during a Shakespeare Audition Tips workshop at the Old Town Playhouse. 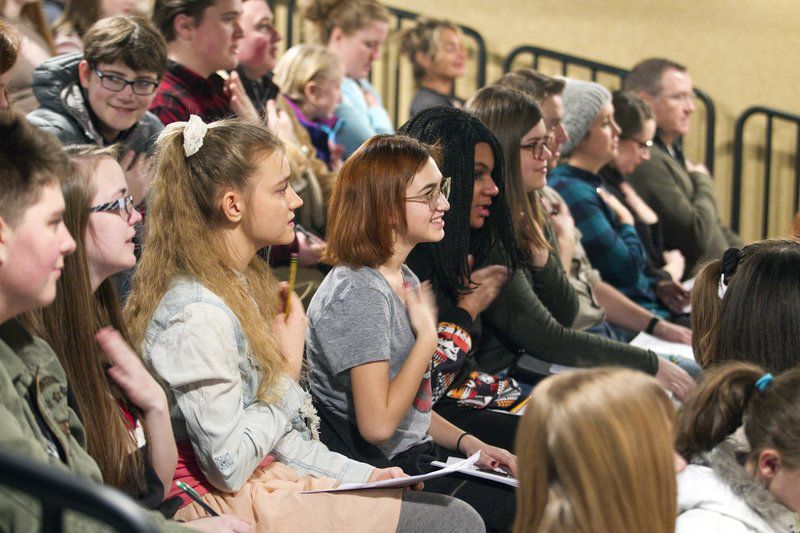 Participants pat out a beat on their chests while reciting lines during a Shakespeare Audition Tips workshop at the Old Town Playhouse. 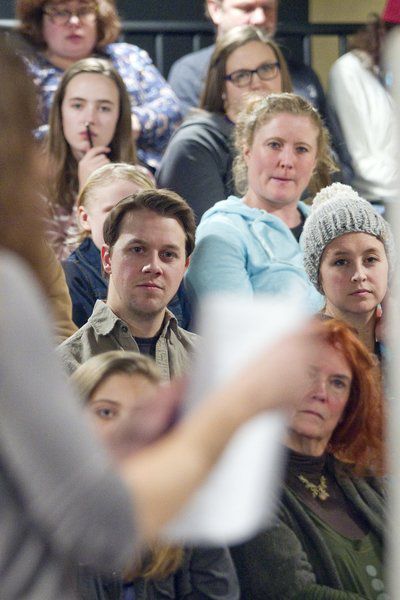 Shelby Lewis, left, and Skye Martin, 14, gallop to the rhythm of lines from Shakespeare during a Shakespeare Audition Tips workshop at the Old Town Playhouse.

Participants pat out a beat on their chests while reciting lines during a Shakespeare Audition Tips workshop at the Old Town Playhouse.

TRAVERSE CITY — Shelby Lewis flits from Juliet to Antony, next to Rosalind and after that, to Katherina. She grins and pushes loose strands of auburn curls from her face, and her rapt audience smiles back.

The Traverse-based thespian spent a recent afternoon at a favorite spot — the Old Town Playhouse on Eighth Street — leading an attentive crowd in how to speak, read and perform the works of William Shakespeare.

“I’m a trained Shakespearean actress,” Lewis said. “And the more I train, the more I realize how necessary it is for people who’ve never (performed these works) before.”

The three-hour workshop was prep for “A Midsummer Night’s Dream,” which Lewis will direct at the Playhouse this spring.

“The Old Town Playhouse itself hasn’t done much Shakespeare in a long time,” she said. “I saw that and wondered if people would be intimidated by auditioning.”

The workshop, Lewis decided, was a good solution.

“It’s taking the fear factor out, is what it’s doing,” said Playhouse volunteer Cindy Leo. “It tells the tale that, out of the 50 people out there, 35 or more are children and teens. I think they have a real appetite for this. And Shelby is just so knowledgeable — they are soaking it up.”

“Shelby is very, very versed in Shakespeare. She understands the text, she understands the movement — she just understands the spirit of Shakespeare. It’s not everyone that can really bring that to life on a stage,” said Leo, who will be “Midsummer’s” assistant director. “She can see the same text from five different angles and go either way with any of it. I’m having a lot of fun collaborating with her and bringing this vision to stage.”

Skye Martin and Annabelle Arends, who arrived early to ensure a spot in the front row, were eager to absorb every word before “Midsummer” auditions, which will be held Jan. 21 through 23.

“This is my first time ever doing Shakespeare, so I learned a lot,” Martin said.

“And even if you know Shakespeare, there’s a lot of stuff to think about,” Arends added.

Working with Lewis, they said, is a bonus.

“She’s just a great director,” Martin said. “Every time she gives you a note, there’s an element of teaching. She always knows what to say to make you understand.”

Both of the teens had roles in Lewis’ production of “Les Miserables” last year.

Like the 50-strong workshop crowd, Lewis seems to draw people. Leo herself recently returned to the Playhouse after a near-20-year hiatus.

“(Shelby) made me want to come back,” she said. “I’ve directed ‘Midsummer’ — I’ve seen it done so many ways. I thought, ‘surely to God, no one can do this in a way I haven’t seen.’ Shelby has a vision I haven’t seen. That got me really excited.

“I had no plans on doing a show this spring, but I just had to.”

The Playhouse holds a special place for Lewis, too — it was her first stage.

“I actually started at the Old Town Playhouse when I was 11,” she said. “A friend of mine was in a play, and I wanted to do it but I was scared. I started watching him more and really just coming to the Playhouse.”

After passing up auditions for “Oliver” and regretting it, Lewis made up her mind to make the cast for the theater’s next production.

Her first role at the Playhouse was young Ellie in jukebox musical “Leader of the Pack.”

“I had a song and a few lines,” Lewis said. “And it’s where I met my best friend. Theater brings people together — especially Shakespeare. It brings humanity together.”

“I enjoyed a good year of being in plays here,” Lewis said. “My last thing was ‘Anne of Green Gables,’ and that was when someone here at the Playhouse told me to look into Interlochen, because it’s so close.”

It wasn’t until high school that Lewis’ love of theater evolved into a love of Shakespeare.

Today, she finds The Bard’s characters relatable in new ways.

“As an adult, I see (‘Romeo & Juliet’) and I understand the second half more than I could have when I was a teenager,” Lewis said. “The more you go back to the plays, the more you see because you have a different perspective.”

Lewis attended Interlochen Arts Academy for three years before moving on to Carnegie Mellon University in Pittsburgh, where she earned a Bachelor of Fine Arts in acting.

“I also studied abroad in Paris, and after college, I went to Los Angeles and New York,” she said. “I saw probably 80 shows in seven months — I was just ready for theater, to appreciate the live element again.”

It was acting, too, that eventually brought her home.

“I played Rosalind in ‘As You Like It,’ which is the largest female role in the canon, about two years ago at the Interlochen Shakespeare Festival,” Lewis said. “That’s what made me want to move back home to northern Michigan.”

Lewis returned and found a home at Interlochen, where she works as a guest educator. She plans to teach in full after completing a master’s in theater education.

Lewis also serves on the Old Town Playhouse’s Artistic Committee and makes time to direct a show or two — or more — each year.

She manages to juggle her own performing, as well. It’s important, especially with Shakespeare, to keep in practice.

“Your job as the actor is to know what you’re saying, as to best convey the words,” Lewis said.

It’s the takeaway, she added, from the workshop.

“That’s what I’m trying to convey to this class — how inviting (Shakespeare) can be,” Lewis said. “It’s the most beautiful way to express humanity that I’ve ever come across. His themes are very universal, and his characters are just fun to play and to watch. Every character he has is so complex, and it’s really hard to find even a contemporary playwright who can do the same thing so well.

“I think that’s why Shakespeare has survived for 400 years, and why we still do it so often.”