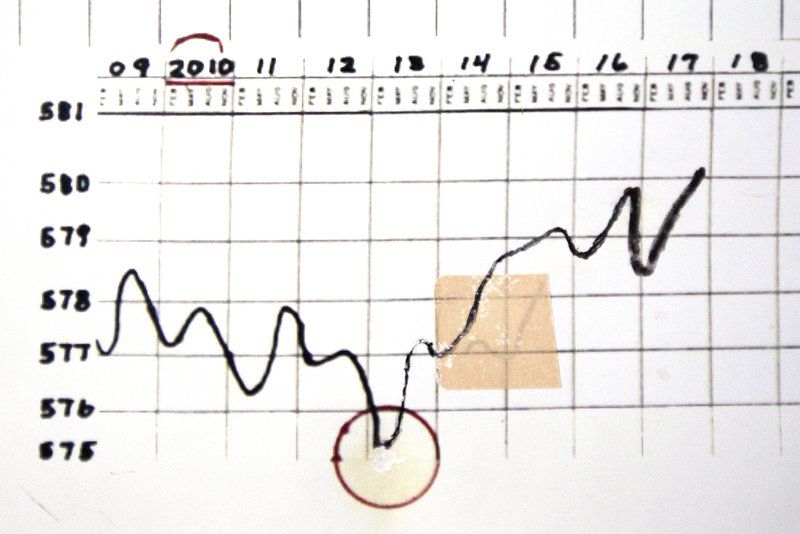 A chart in the Mission Point Lighthouse shows each year’s lake levels from the lighthouse’s creation in 1870. In 2013, the lake was at its lowest ever at 576.02 feet. The measurement for 2017 was 580 feet in December.

A chart in the Mission Point Lighthouse shows each year’s lake levels from the lighthouse’s creation in 1870. In 2013, the lake was at its lowest ever at 576.02 feet. The measurement for 2017 was 580 feet in December.

TRAVERSE CITY — Bill Swift tries to predict where water levels will be for that season when he puts in his dock every spring at his West Grand Traverse Bay home.

“Every year it’s kind of a crapshoot how high the water is going to rise,” Swift said. “I’ve guessed wrong now two years in a row. The water keeps going up.”

Water levels for Lake Michigan and Huron averaged 580.2 feet in December — nearly two feet higher than the long-term average of 578.5 feet recorded for the lakes over the last 100 years, according to the Army Corps of Engineers.

Predictions are that water levels will rise another 8 to 11 inches in the next six months, with an overall increase of 4 to 6 inches for 2018.

“We got a tremendous amount of phone calls,” said Oaks, who has been in business for 17 years.

Much of his work consists of removing old docks and designing new ones that will clear the water.

“We have to build these docks different every year because of fluctuating water levels,” Oaks said.

Docks can also be raised using leg extensions, but most are already extended as far as they can go, Oaks said.

Swift’s leg extensions on his dock are maxed out, but last year he shortened his 300-foot-long dock, putting in 50 fewer feet than he has in previous years.

“Within a couple of weeks the water was lapping over the dock,” Swift said, and he took out another 50 feet.

Lake Michigan water levels hit a 100-year high in 1986, when levels were 3.6 feet above the long-term average, according to the Corps. The all-time low was reached in 2013, when levels were 2.7 feet below the LTA.

Keith Kompoltowicz, chief of watershed hydrology for the Corps, said current levels are 11 inches higher than they were last December. He also points out that those levels are still 1.5 feet below the record highs of 1986.

Water levels are dependent on snow accumulation across the Great Lakes basin, Kompoltowicz said, as well as ice on the lakes, which slows evaporation of lake water.

“Typically when we see larger snow pack across the Great Lakes that points to a larger seasonal rise,” Kompoltowicz said, especially if winter is followed by a wet spring.

Matt Short, the owner of Lakeshore Marine Construction, has had a recent uptick in the number of Lake Michigan shoreline stabilization jobs he’s been doing and will do over the coming year.

Short’s father started Lakeshore Marine about 25 years ago, with Short taking over the Elk Rapids-based company about 11 years ago.

High water levels that are close to the shoreline can cause a buildup of wave energy, with waves getting stronger and stronger closer to shore rather than being broken up on shallower lake beds.

“It’s tearing up the people’s shorelines,” Short said. “Some of them look like cliffs, and there are trees laying in the water and on beaches.”

Swift said his property, located near Bowers Harbor on the Old Mission Peninsula, has also lost its beach.

Short’s shoreline stabilization work consists mostly of piling riprap along the shore because that’s what the state of Michigan allows, he said. The company also replaces seawalls, but Short said it’s very difficult to get a permit for a new seawall.

Permits for shore stabilization are needed from the Michigan Department of Environmental Quality and the Corps, which can take up to five months to get approved, Short said.

Robyn Schmidt, who is with the DEQ Water Resources Division, said seawalls are a viable strategy for protecting shorelines, but riprap is the preferable option. Riprap, she said, breaks up wave action while providing nooks and crannies between the rocks that maintain important marine habitats.

Susan Och, Leland Township supervisor, said all the photos advertising the Leelanau County township’s wide, sandy Lake Michigan shorelines at both public beaches and private cottages for rent are misleading because those shorelines are gone.

“We can stand down at the harbor and watch the waves go right over the breakwater,” Och said. “It’s pretty amazing.”

In Leland’s historic Fishtown, located on the Leland River at the mouth of the harbor, high water levels have been eating away at the foundations of two structures — Carlson’s Fishery and the Village Cheese Shanty.

Another shanty — the oldest in Fishtown — was acquired in March and then had its foundation raised up about 8 inches, said Amanda Holmes, executive director of the Fishtown Preservation Society.

“And then it got submerged,” Holmes said. “The water was just inches from coming up over the floorboards.”

Kompoltowicz said that history tells us the lake levels go through cycles and will eventually come back down.

Holmes said many area residents remember the high water levels from 1986 and are not worried about the current levels.

“This is an issue that recurs on a very regular basis,” Holmes said. “We just know that if the water comes up people have to be ready to lift things.”

ACME — A seawall that spans a public corridor to Lake Michigan in an Acme Township subdivision can stay after all.