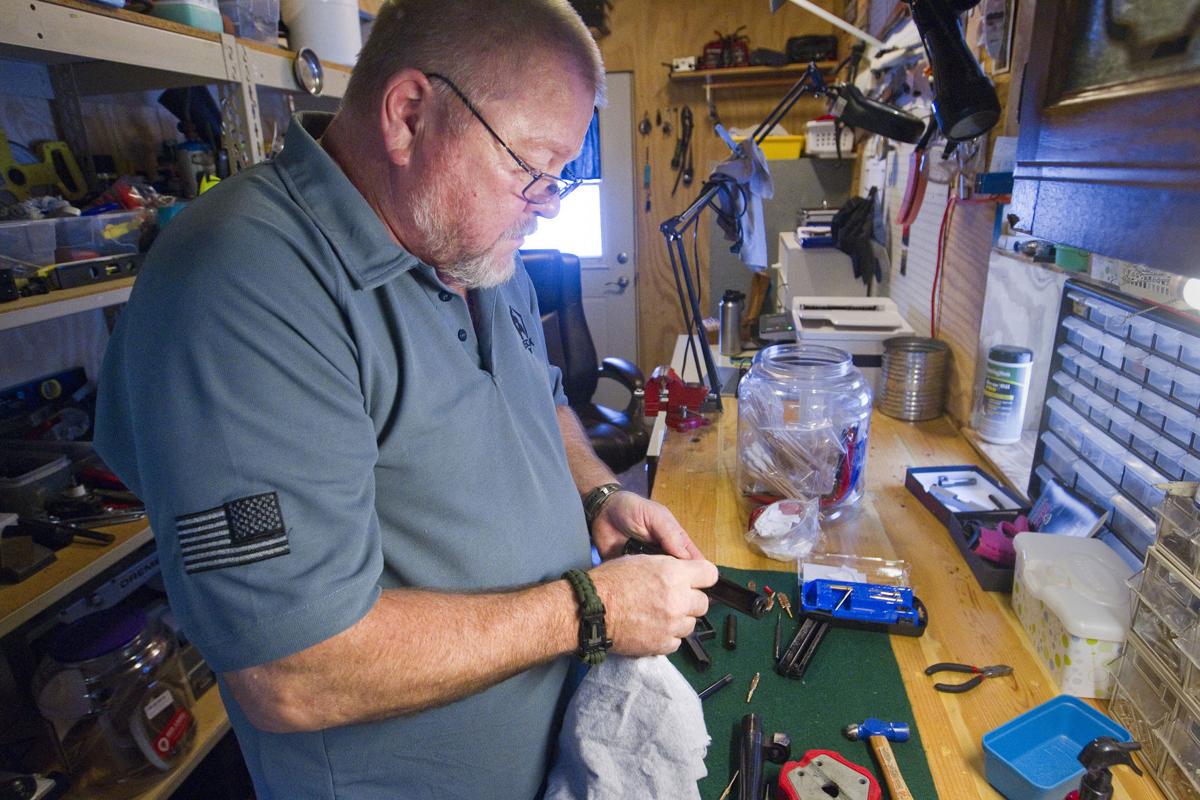 Greg Lewis works on a firearm inside Bonni’s Guns and Gear, which he owns with his wife, in Mancelona. 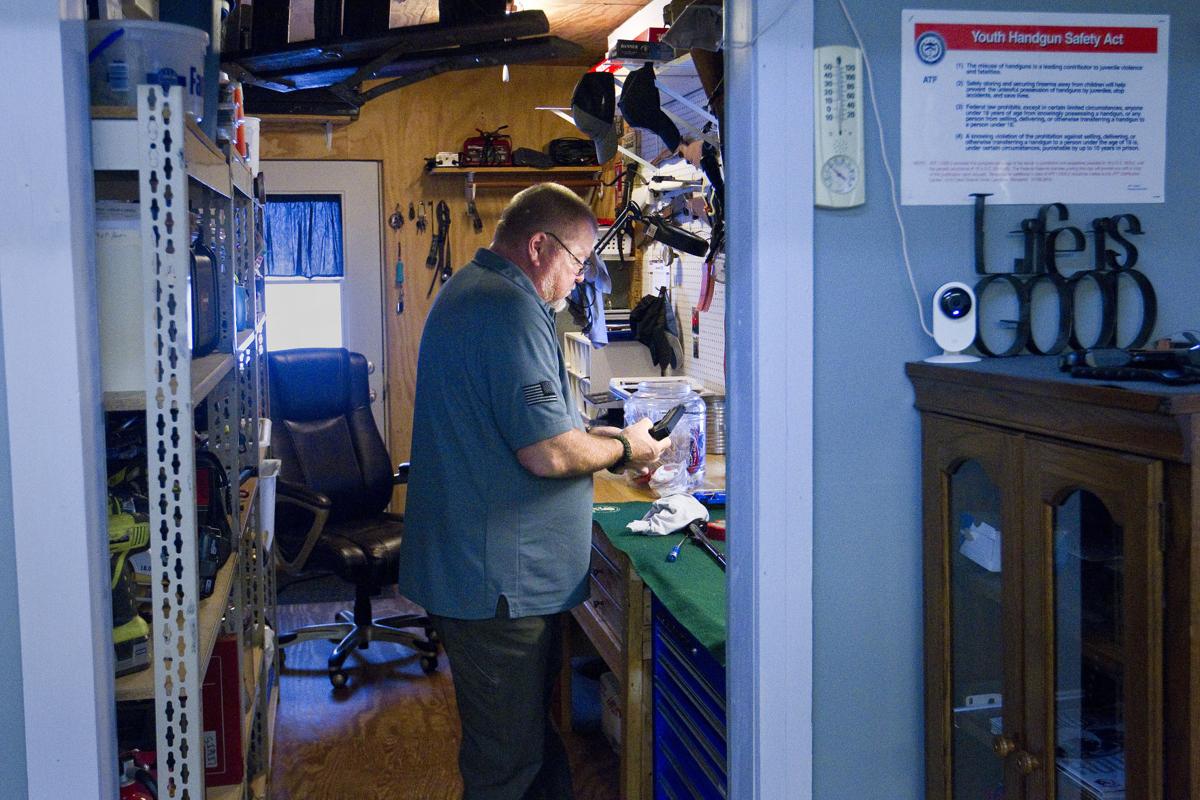 Greg Lewis works on a firearm inside Bonni's Guns and Gear, which he owns with his wife, in Mancelona. 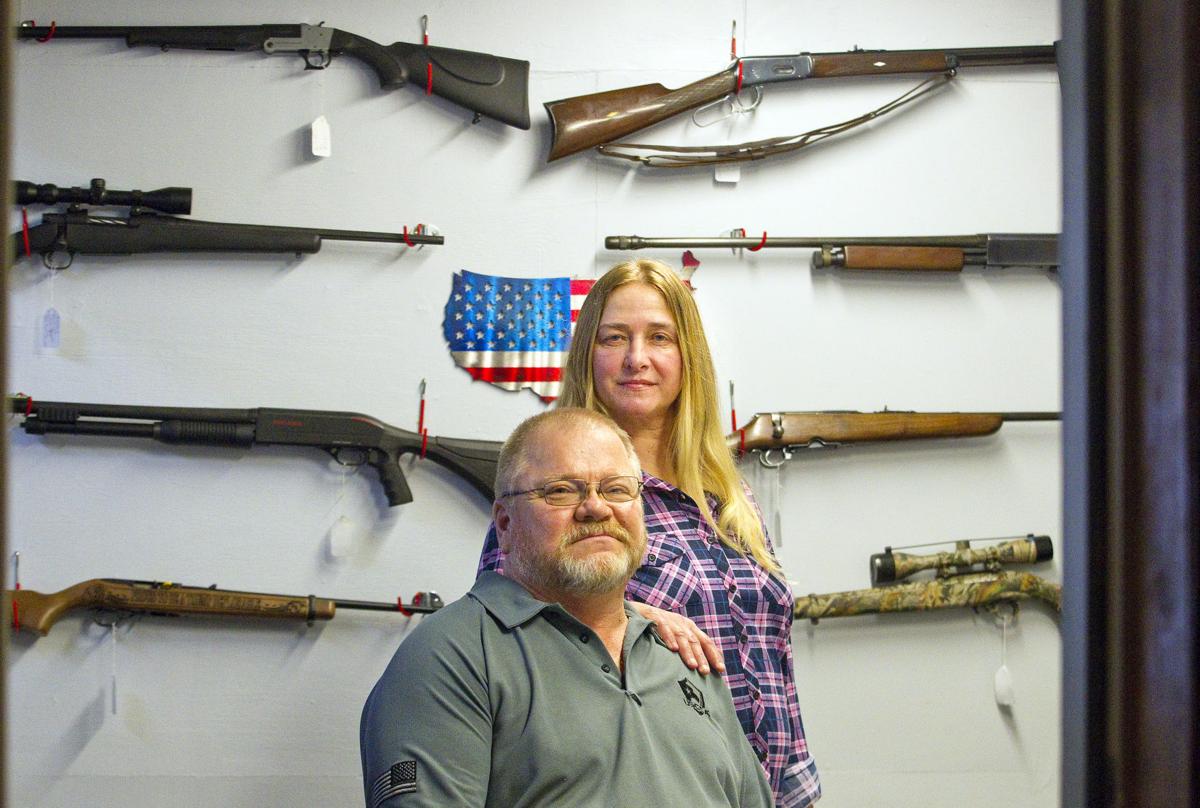 Greg and Bonni Lewis inside Bonni's Guns and Gear in Mancelona. 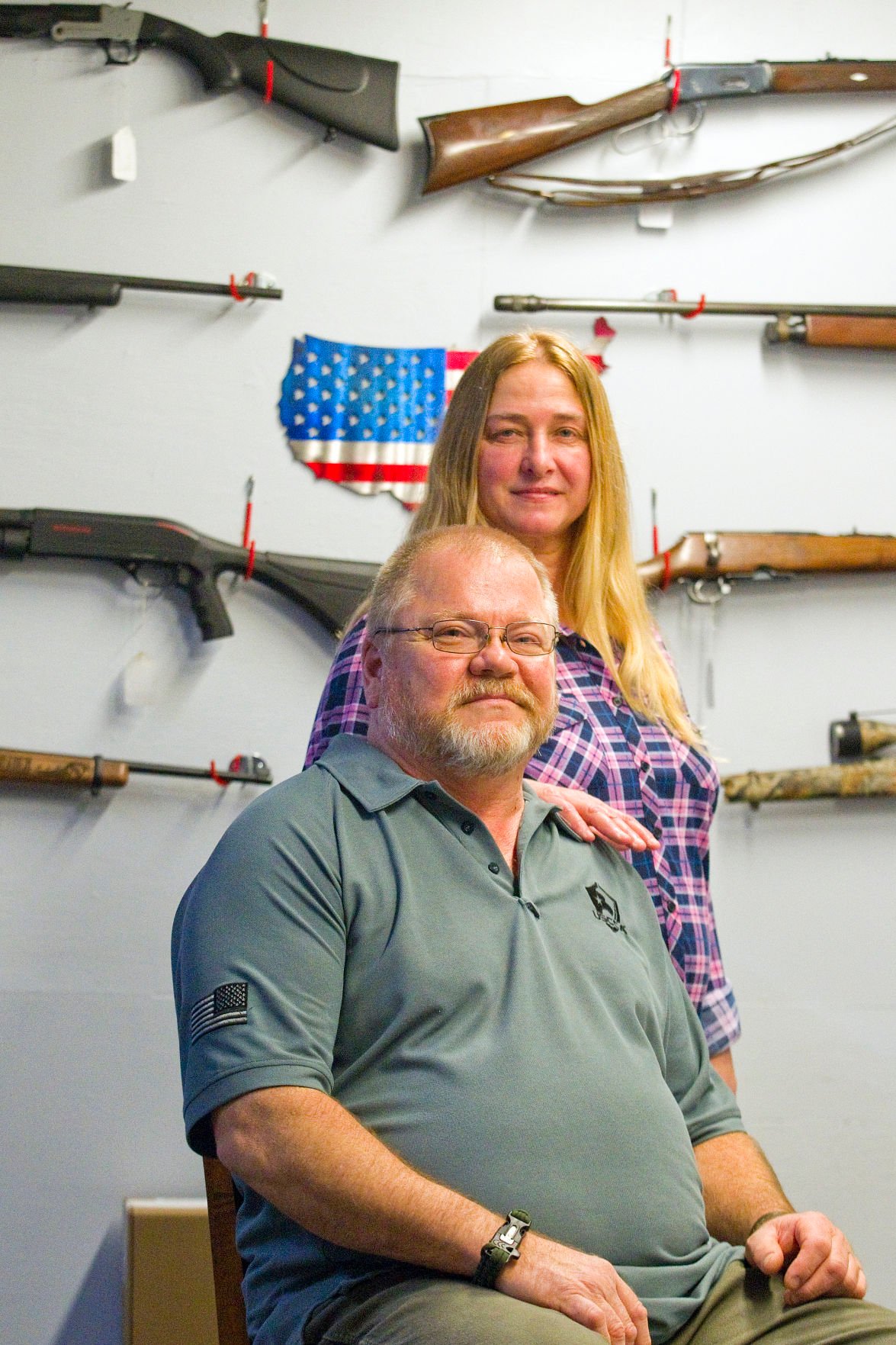 Greg and Bonni Lewis inside Bonni’s Guns and Gear in Mancelona.

Greg Lewis works on a firearm inside Bonni’s Guns and Gear, which he owns with his wife, in Mancelona.

Greg Lewis works on a firearm inside Bonni's Guns and Gear, which he owns with his wife, in Mancelona.

Greg and Bonni Lewis inside Bonni's Guns and Gear in Mancelona.

Greg and Bonni Lewis inside Bonni’s Guns and Gear in Mancelona.

BELLAIRE — Commissioners in two local counties soon will consider whether to adopt Second Amendment sanctuary measures, an issue gun-rights activists across the nation are increasingly presenting to elected officials.

The Second Amendment sanctuary movement is the response from gun-rights activists after gun-control advocates have in recent years proposed an array of new firearms restrictions. Among those proposed new rules are universal background checks, assault weapon bans and red flag laws that would allow authorities to temporarily take guns away from people deemed dangerous to themselves or others.

The first place in Michigan to officially consider the issue was Mackinac County in the Upper Peninsula, where county commissioners unanimously voted in favor of the gun sanctuary measure Jan. 23. Commissioners in both Cheboygan and Oscoda counties on Tuesday also voted to adopt the resolution.

And that’s just the beginning, said one of the movement’s leaders.

“We are organizing in 83 counties all across the state of Michigan,” said Antrim County resident Randy Bishop, known for his conservative talk radio morning show.

The Second Amendment sanctuary movement began in 2018 in Illinois and quickly spread to numerous states, including California, Colorado, New Mexico and Florida.

David Campbell, vice chairman of the Effingham County Board in Illinois, said his county was one of the first in the nation to pass a Second Amendment sanctuary resolution in April 2018.

Campbell said he and a local prosecutor chose the word “sanctuary” as a swipe at Democratic leaders who used the word to describe their refusal to cooperate with federal immigration enforcement in the “sanctuary cities” movement.

“We thought, well, if they can do that, why can’t we make Effingham County a sanctuary for legal, law-abiding gun owners?” Campbell said.

In Virginia, home to the National Rifle Association’s headquarters, lawmakers in both parties have traditionally supported gun rights. But in recent years, Democrats there have backed tighter restrictions on guns.

One of the new gun control bills subsequently proposed inflamed gun rights advocates and helped fuel the Second Amendment sanctuary movement nationwide. The bill, as initially proposed, would make it a felony to sell, manufacture, purchase or possess assault weapons and certain magazines.

Many see that bill as the first step down a slippery slope that will end with their guns being taken away.

That includes Kalkaska County residents Jeff Sieting and Ryan Wagner, who brought the gun sanctuary resolution to county commissioners on Jan. 15. They said the effort is to get ahead of any new gun control restrictions in Michigan, something Gov. Gretchen Whitmer has indicated as a goal.

“Now they are nibbling at the Second Amendment,” Sieting said in an interview last week with the Record-Eagle.

Bishop said the situation in Virginia absolutely spurred his involvement in the effort in Michigan, and that the resolution is a way to get every elected county official in the state to publicly address the gun rights sanctuary question spearheaded by online social media group Michigan for 2A Sanctuary Counties.

“We want them all on the record early this election year. If they don’t support our resolution we will find people serious about running against them,” Bishop said.

He said about 20 counties were already presented with the resolution.

“This thing is so fluid and moving so quickly,” he said.

Not everything moves quickly, though.

Bishop said he presented the resolution on Jan. 16 to Antrim County commissioners during public comments in hopes they would vote that day. The item had not appeared on an agenda in advance, so it was tabled until February for public notice.

“They want the public to know about it. Well, OK. The public is going to show up,” Bishop said.

“We will have more firearms at that meeting than the sheriff has in his office,” Bishop said.

“We are going to show them we are serious about our Second Amendment rights. We will exercise our gun rights and display it at the meeting.”

Reactions to the phenomenon

Lewis and his wife Bonnie operate a gun shop in rural Mancelona, where they sell guns and do the occasional repair job.

Lewis said he thinks the gun sanctuary movement is worth the effort even if likely ineffective.

“I think it’s a good idea, even though it won’t do much good,” he said. “Legal gun owners aren’t the problem.”

But pushing the resolution in front of elected officials is an awareness campaign for politicians who depend on votes to keep their jobs, he said.

“I think they realize there are a lot of us out here who like to shoot,” he said.

Not everyone is like-minded, though.

Some have suggested the whole gun sanctuary effort is political posturing.

Elected officials at the local, state and national level all swear oaths to protect the Constitution, including its amendments, she said, which means the Second Amendment is already enshrined in protections.

Stein-Seabolt underscored how she is a gun owner and like many others, both supports gun ownership rights along with restrictions meant to protect the public.

Janeen Wardie of Kalkaska County, who lost a son to suicide and for the past two years has organized Traverse City’s Out of the Darkness suicide prevention walk, said maintaining gun ownership rights and adopting gun control measures such as red flag laws are not mutually exclusive.

Wardie said crisis situations for those with mental health problems must be managed for safety considerations, both for the person and the public at large.

“It is important if someone is suicidal that lethal weapons be removed, whether medication, knives or firearms,” she said, adding that goes for those deemed homicidal, too.

But that shouldn’t mean every person ever treated for any mental health condition should be barred from gun ownership, Wardie said.

The sheriff said he would want to have a conversation with a judge before taking away a citizen’s guns under a red flag law, should he ever receive such a court order.

“They have to show they are mentally ill and not just a blanket rule,” Bean said.

However, Bean said he doesn’t “go against judges’ orders.”

Brundage said extreme risk protection orders save lives and protect due process rights at the same time. Furthermore, false accusations that result in wrongful protection orders — including those in which firearms are removed by authorities — can result in felony criminal charges, she said.

In fact, the gun control organization argues more violence may be the actual outcome of attempts to create Second Amendment sanctuaries, Brundage said.

Kalkaska County Prosecutor Mike Perreault said he supports gun ownership rights and understands concerns about gun control laws that make already purchased weapons illegal to possess, for example. But he argued there are good reasons to keep firearms away from some citizens under specific circumstances — the red flag law element.

“You should have the right to keep and bear arms until you show society you aren’t capable of doing so, either by way of violent crimes or incompetency findings,” Perreault said.

Those situations are always on a case-by-case basis, the prosecutor said.

Darrell Miller, co-director of the Duke Center for Firearms Law, said the gun sanctuary movement is largely a phenomenon in rural communities, where people have grown up hunting and treasure their firearms.

“For whatever reasons, people, especially in these communities, have a deep-seated fear that universal firearm confiscation is just around the corner,” Miller said.

One day, two boards, one issue

What: Antrim County Board of Commissioners to consider Second Amendment sanctuary resolution

What: Kalkaska County Board of Commissioners to consider Second Amendment sanctuary resolution

KALKASKA — This week brought a tale of two counties that diverged on a gun rights measure making its way across the state.