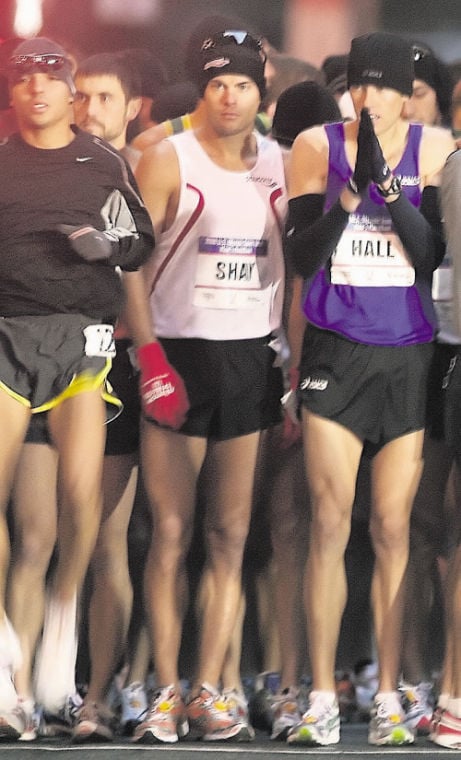 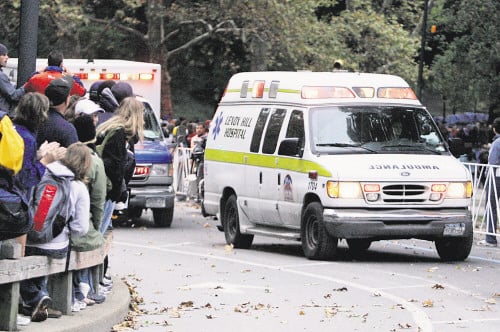 An ambulance carrying marathon runner Ryan Shay makes its way through Central Park Saturday. Shay died during the marathon trials after collapsing about 51/2 miles into the race. He was 28.

An ambulance carrying marathon runner Ryan Shay makes its way through Central Park Saturday. Shay died during the marathon trials after collapsing about 51/2 miles into the race. He was 28.

TRAVERSE CITY -- Joe Shay was 10 minutes away from the Michigan International Speedway on Saturday morning when he received a phone call that his son Ryan had fallen, hit his head and was being treated at the Olympic Marathon Trials in New York City.

"I thought that it had to be pretty bad," said the Central Lake coach, who was taking two runners to the Division 4 state cross country finals. "Ryan would never let something like that (fall) stop him from running in the trials."

Ryan's heart had stopped and medical personnel were trying to revive him.

Joe Shay was in disbelief.

"He said Ryan had cardiac arrest and didn't recover," Shay said. "He said Ryan probably died before he hit the ground."

Ryan Shay -- who won 11 state championships in track and cross country at Central Lake, captured the NCAA 10,000-meter outdoor championships at Notre Dame and was a five-time national road racing champion -- was 28.

Ryan Shay collapsed 51/2 miles into the race. He hit the ground near the Central Park boathouse, a popular Manhattan tourist spot.

"He crossed right in front of me and stepped off the course," runner Marc Jeuland told the Associated Press. "He nearly tripped me. He would not have been taxed at that point."

Shay was pronounced dead at 8:46 a.m. at Lenox Hill Hospital.

An autopsy will be performed today.

Shay died pursuing his dream of earning a berth on the U.S. Olympic Team. The top three finishers in Saturday's race were named to the squad.

"I'm going to miss him dearly," said his father, fighting back tears. "If you had to die, and knowing what Ryan believed in, wanted and tried to accomplish, if something like this was going to happen, I guess that (Olympic Trials) would be the place."

The news shocked the Central Lake community in Antrim County.

"It's a huge loss for our school, our community," Central Lake Athletic Director Quinn Barry said. "He was always meticulous about doing things the right way for the right reasons. I think everyone here admired him for the dedication and time he put in to try to make himself the best athlete and person he could be."

Barry said Shay, who was married four months ago and residing in Flagstaff, Ariz., always stopped by school when he was in town.

"He was always really well grounded," Barry said. "With all the success he had, he was still always willing to give of his time. I think that's what people around here really liked about him. That's one of the great things about little towns. That type of behavior is grounded in those kids. They want to be here when they can.

Barry and Eric Shooks, a classmate of Shay's, were en route to East Lansing for the Michigan-Michigan State game when they received the news.

"We turned the car around and came back," Barry said.

Notre Dame had a moment of silence for Shay before its football game on Saturday against Navy.

"I first saw him run in eighth grade -- and he was beating high school kids," Lober said. "I knew he could be special.

Joe Shay said the family had been told years ago that Ryan had an enlarged heart. They also knew he had a low pulse rate.

"We figured it (enlarged heart) was because of his running," Joe Shay said. "We had it checked.

"But he always ran and did stuff and we don't have heart problems in our family."

About six months ago, Shay said, Ryan told him he was being tested in Flagstaff.

"He said, 'They're really amazed at how slow my heart is. They told me when I'm older, because of the slow rate of my heart, I might have to get a pacemaker,'" Joe Shay said.

A recreational runner, a Midland policeman who attended high school in Traverse City, died during last month's Chicago Marathon. This death, however, was especially startling considering Shay was an elite athlete.

"He was a tremendous champion who was here today to pursue his dreams," said Craig Masback, chief executive of U.S. track and field's governing body. "The Olympic trials is traditionally a day of celebration, but we are heartbroken."

It was in New York two years ago while watching the marathon that Shay met his future wife, Alicia, also an elite distance runner. Alicia was a college teammate at Stanford with Olympic Trials winner Ryan Hall, and his wife, Sara. Sara Hall was a bridesmaid in their wedding in July.

"He had an incredible ability to push himself to the limit," Sara Hall said of Shay, with whom she and her husband used to train.

Alicia was a two-time NCAA champion and the collegiate 10,000-meter record-holder while running as Alicia Craig at Stanford. She was hoping to make it to the Olympics in Beijing (China) in the women's 10,000 meters.

Shay was a favorite going into the 2004 trials but was hampered by a hamstring strain and finished 23rd.

"I know he would have made the team," Joe Shay said. "He was favored to make it. Then he pulled that hamstring muscle at 15 miles."

Shay said that although his son had moved west, he always planned to return to Michigan.

"He loved northern Michigan," Joe Shay said. "He was always quoted as saying how the Jordan Valley was one of his favorite places to run and how northern Michigan winters hardened him and made him a tougher runner."