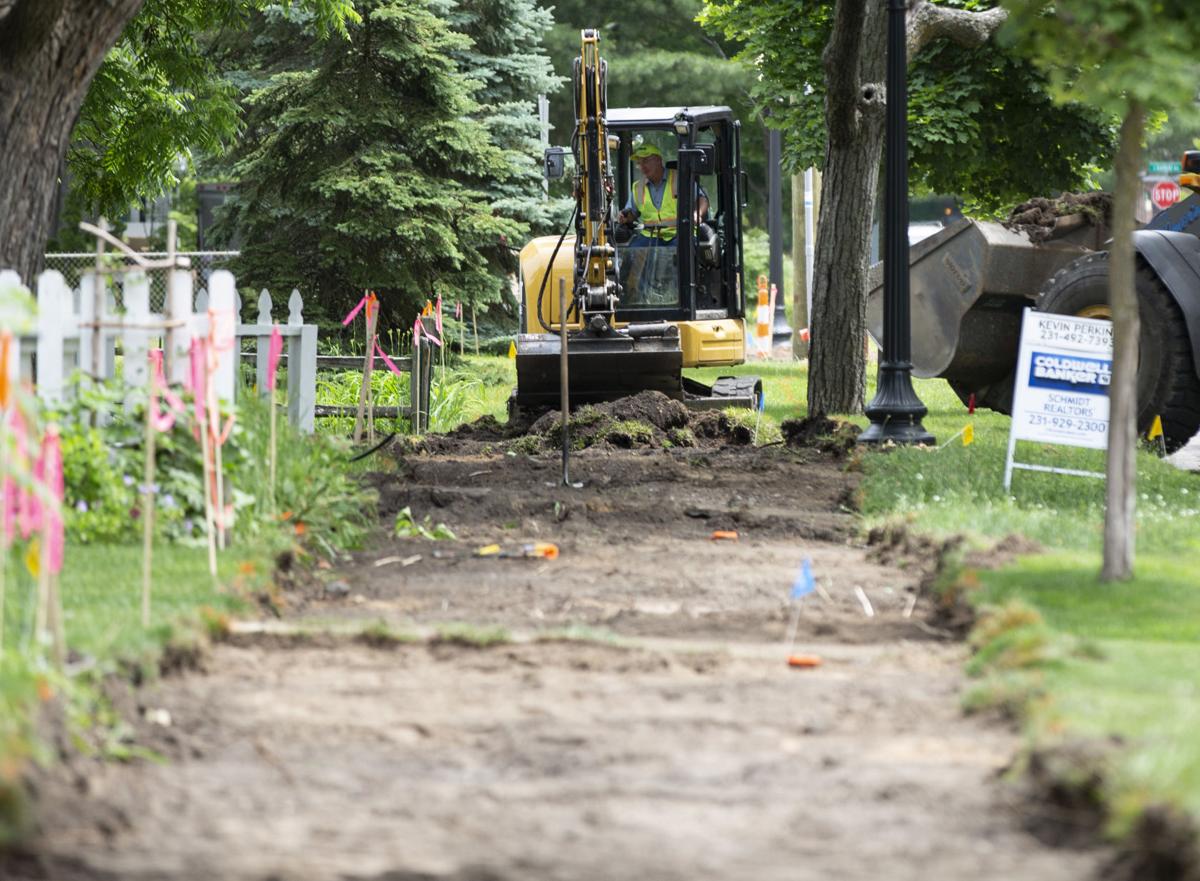 Workers prepare to install sidewalks along Boyd Avenue in Traverse City on Friday. 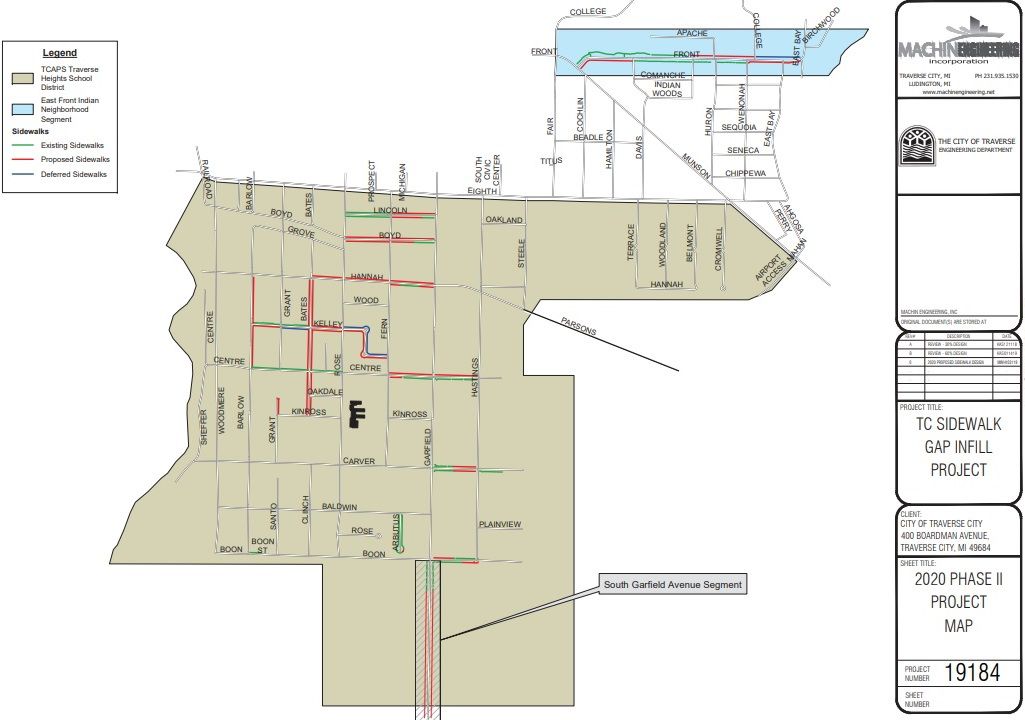 This map shows sidewalks planned for construction in 2020 in Traverse City.

Workers prepare to install sidewalks along Boyd Avenue in Traverse City on Friday.

This map shows sidewalks planned for construction in 2020 in Traverse City.

TRAVERSE CITY — Diane Bolton could see arguments for and against the sidewalk that’ll soon be outside her home on Boyd Avenue in Traverse City.

Team Elmer’s crews worked inside the long cut in the ground where the sidewalk will be Friday afternoon as Bolton spoke with a reporter. Traverse Area Recreation and Transportation Trail is close by, so adding sidewalks seems like duplication of effort, she said.

“On the other hand, tying neighborhoods together seems like a good thing to do, like the right thing to do,” she said.

That’s how Bolton sees work that’s part of Traverse City’s push to fill in gaps in its sidewalk network.

City Engineer Tim Lodge said the city’s in year two of a three-year plan. Preparations for the project started in 2018 and construction this year is a little ahead of schedule. That’s put a crunch on the window the city has to notify property owners that work is starting, with another round of letters going out last week.

Some residents along the streets getting new walkways welcome them, while others think they’re unnecessary or don’t want them.

Work hasn’t started yet on Kelley Street between Rose and Fern streets, where residents opposed to the coming walkways signed a petition that neighbor Rick Buckhalter circulated when plans for the project were forming. He said those who signed are furious the plans are going ahead anyway.

Kim Hess said her husband signed Buckhalter’s petition. She doesn’t have strong feelings against the sidewalk planned in front of her Kelley Street home, but she doesn’t think the street’s busy enough to make building it worth the cost.

“There are other places where they could allocate the money that would make more sense,” she said.

Ed Scholl lives a few doors away on the block, which includes a north-south dogleg in the east-west street. He said sidewalks weren’t something he was looking for, and echoed that the street isn’t busy.

But there is some traffic, so sidewalks will help keep kids from walking in the street, Scholl said. He’s seen new sidewalks nearby, thinks the builders are doing a good job and appreciates the focus on adding walkways to the Traverse Heights neighborhood.

“I’m happy with what they’re doing, I think it’s money well-spent,” he said.

Plans to build a sidewalk on Kelley Street across from Scholl and Hess, on their block’s north and east side, have been deferred, Lodge said — impacts to trees was a factor.

So too is a stretch along Kelley Street between Grant and Bates streets, where topography makes building a sidewalk tricky and costly, Lodge said.

While Buckhalter said the vast majority of his neighbors don’t want sidewalks, city Manager Marty Colburn said his assistant’s follow-up calls to residents found opinions closer to 50-50 for and against.

“What I have found over time, and I have been building streets and sidewalks for 30 years, is by the time you’re done and people see the use of it, the majority are very supportive of the improvements,” Colburn said.

Sidewalks are part of a plan to not only make Traverse City more walkable, but easier for people of various abilities to get around, Colburn said.

Plus, building infrastructure is about looking forward for the next 50 years, not just today, Colburn said. The homes along these new sidewalks could change hands several times by then, he said.

Back on Boyd Avenue, Devan Gorton said she’s somewhat upset about the sidewalk being built in front of her home. Not only is TART Trail nearby, but people walk down the alley behind her house, so sidewalks seem unnecessary.

The strip where the walkway will go is a short distance from Bolton’s porch. She paid a lot for landscaping in front of her house a few years ago, so seeing the earth torn up there hurt, she said. On the other hand, she has less to mow.

Tony Burley’s front porch is close to where the sidewalk will be as well, and the ongoing construction work has made “kind of a mess,” he said.

He knew the project was coming after calling the city and thinks the sidewalks will be a good thing, he said. He has two boys and it’ll be safer for them and other kids walking along Boyd Avenue.

“I’m just glad that the sidewalk went around the tree,” he said, referring to a mature oak shading his front lawn.

Hess was also glad that her trees will be spared, she said. But others weren’t so lucky. Cut stumps stood in front of a handful of Kelley Street homes, and Bolton said contractors cut down three in her neighbor’s yard.

Colburn said some trees will have to come down to build the sidewalks, and Machin Engineering is helping to keep track of how many — the company helped plan the sidewalks project, including doing land surveying, and is assisting during construction, company owner and President Patrick Machin said.

The city will replant at least one tree for each one, although space constraints or nearby utilities won’t always allow replanting them in the same spot, Colburn said.

“We are trying to do our best, particularly for more sizable native trees, to save those,” he said.

Traverse City approved a $3.1 million contract to build 9.9 miles of sidewalks in 2019, as previously reported.

Even more are coming through Safe Routes to School grants to make areas around 10 schools in and around Traverse City more walkable, for a total of 14 miles, Colburn said. There’s no start date for that work yet, as Michigan Department of Transportation seeks another round of bids after the first proved too costly.

Hess said it seems like the city’s going to do what it wants, and she and her husband will have to adapt to the new sidewalk going in front of their house.

“It’s progress, but it doesn’t mean we have to like it,” she said.

TRAVERSE CITY — More multi-use trails and sidewalks are coming to Traverse City, thanks to two big projects aimed at extending the Boardman La…