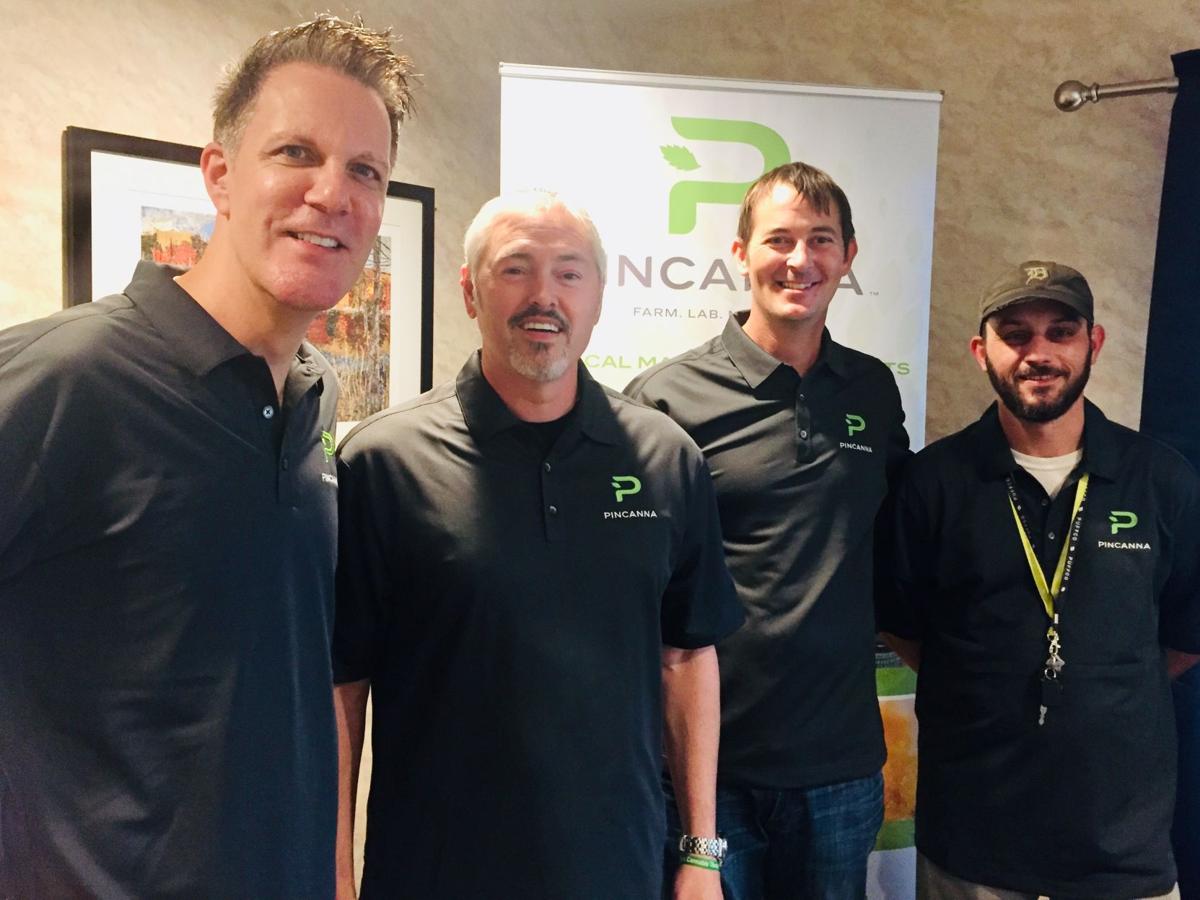 From left, Charlie Grover, David Esser, Matthew Valerio and Bill Lenz of Pincanna, will open a marijuana provisioning center in Kalkaska this fall. 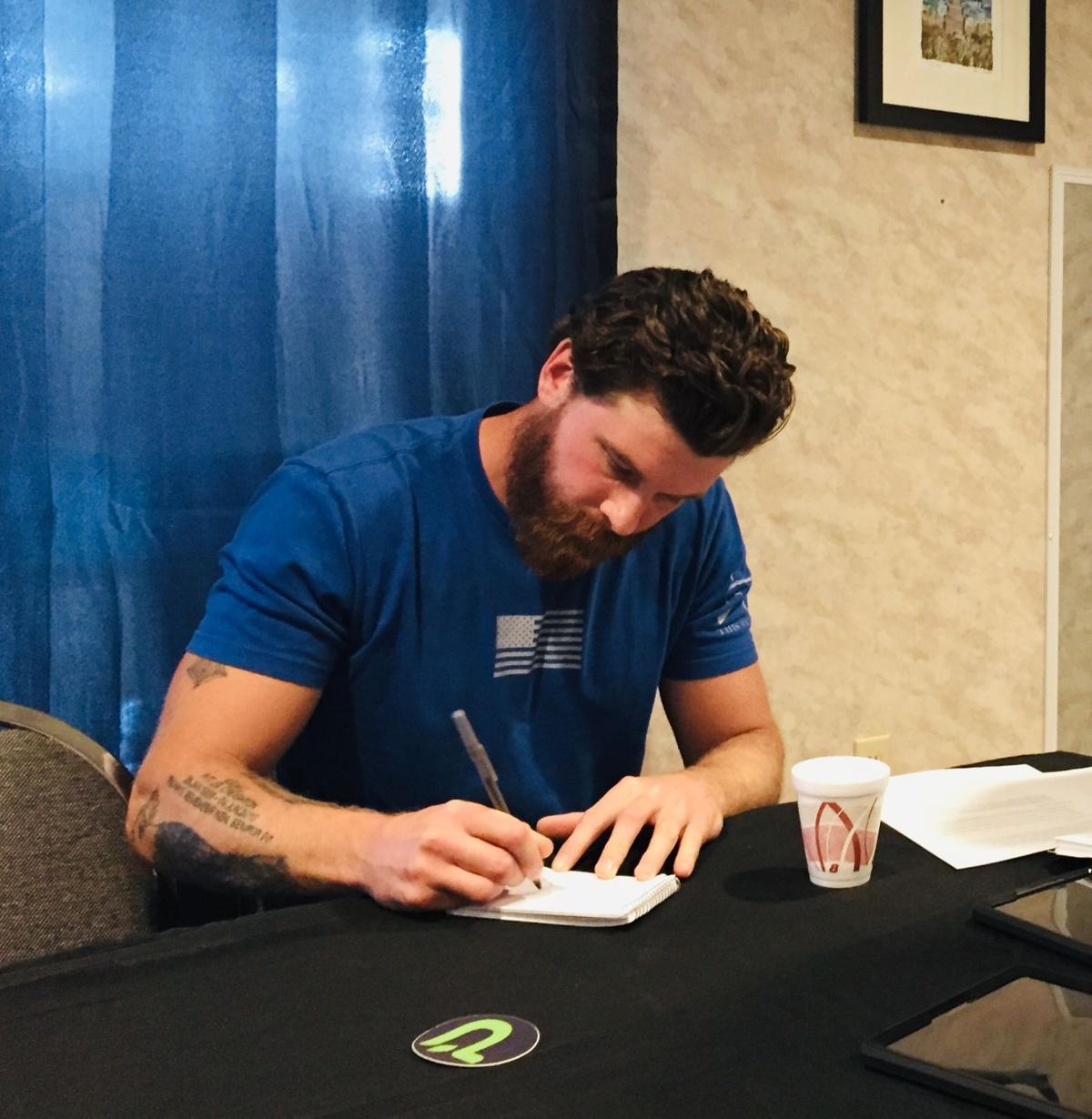 Ken Creighton applies for a job as a marijuana grower at a job fair in Kalkaska Saturday.

From left, Charlie Grover, David Esser, Matthew Valerio and Bill Lenz of Pincanna, will open a marijuana provisioning center in Kalkaska this fall.

Ken Creighton applies for a job as a marijuana grower at a job fair in Kalkaska Saturday.

KALKASKA — More than 40 people showed up to a provisioning center hiring event organized by what the local compliance officer called, “the most professional group I’ve ever worked with.”

Four representatives of Pincanna, a Farmington-based marijuana growing, manufacture and retailing business, spent Saturday inside a conference room at the All Seasons Hotel on Cedar Street looking for as many as 16 new hires.

“Our goal is to make sure it’s the right kind of people, with the right training and the right organization,” compliance officer Denny Corrado said. “It’s not just, ‘Come to Kalkaska and open your doors.’ This is a very professional operation.”

Openings are for shift managers, greeters and patient consultants. Applicants must be over 21 with no felony convictions.

“We’re looking for a diverse staff, people knowledgeable about the different constituencies of cannabis, how it works in the body, and how it interacts with various illnesses,” Valerio said.

Valerio said that statewide, they may hire as many as 100 people.

Ken Creighton, of West Branch and Sterling Heights, said he hoped to be hired for the company’s growing and processing center, located in Pinconning.

“I’m originally from Nashville, but this is the industry I want to be in,” Creighton said. “I’ve followed the production side of the industry, and that’s why I came to Michigan.”

He said Pincanna’s owners filled out a 13-page permit application, passed background checks, passed an administrative review, and were vetted by the state before getting the green light.

“Three years ago, when this was first being discussed, there was some push back,” Corrado said, of local opinion. “But the village did things right and now there’s very little push back at all.”

Michigan voters approved recreational use as part of the Regulation and Taxation of Marijuana Act of 2018. But the state’s Department of Licensing and Regulatory Affairs has so far only issued medical-use licenses, aka, “provisioning centers.”

Holders of these medical licenses, like Valerio and his Pincanna partners, will be able to apply for recreational licenses as soon as Nov. 1, according to Corrado.

In the meantime, they must navigate shifting federal, state and county regulations.

“For example, security cameras,” said Valerio. “The state is very specific about how many and where they go and, we are making sure we comply.”

At the federal level, marijuana is still officially considered a controlled substance, with a high potential for abuse, but that may be changing.

“I know there’s a push in Washington to take it (marijuana) off Schedule I,” Corrado said.

Schedule I refers to drugs the federal government says have no medical use. Other examples of Schedule 1 drugs are heroin, LSD and ecstasy.

For comparison, Schedule II drugs, substances the government deems to have some medical value and less chance of abuse, include Adderall and Ritalin, but also cocaine and methamphetamine.

Pincanna’s provisioning center is scheduled to open this fall at 786 S. Cedar St.

Repurposing shuttered buildings is one benefit of allowing marijuana businesses to open in the village, Corrado said, adding they also provide jobs and put abandoned property back on the tax rolls.

Editor's note: This story was updated 09/16/19 to correct a street address.

TRAVERSE CITY — Thirteen medical marijuana entrepreneurs are set to get their provisional city licenses for a dispensary in Traverse City.