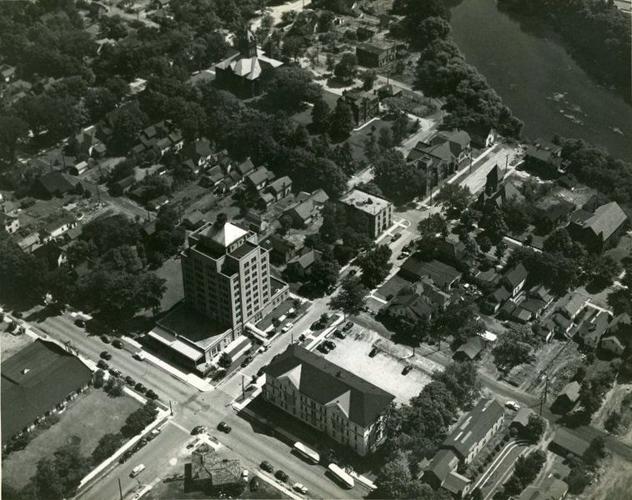 Special to Record-Eagle/Traverse Area District Library ArchivesThis mid-20th century aerial image of the Park Place Hotel was taken before the early 1960s, at which time Park Street was closed from State Street south to the alley between State and Washington Streets. In later years Park Street would be vacated south all the way to the Boardman River. 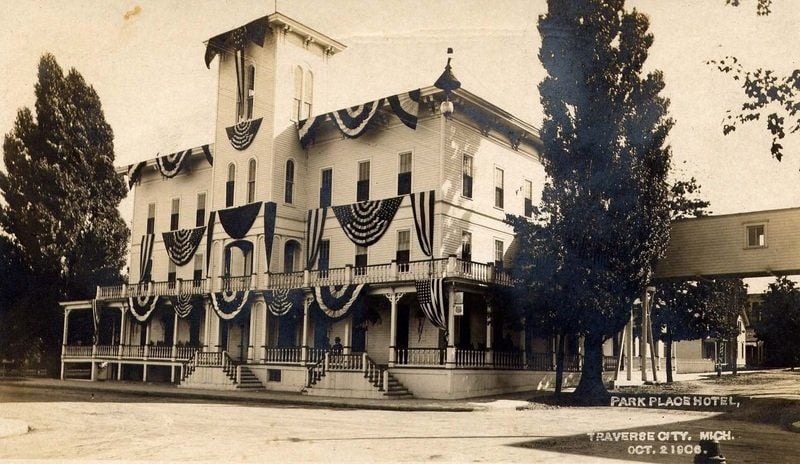 Special to Record-Eagle/Traverse Area District Library ArchivesThis 1906 image shows the wooden Park Place Hotel that was built in 1873 as the Campbell House. It stood at the same location as today's Park Place brick tower, which opened in 1930. 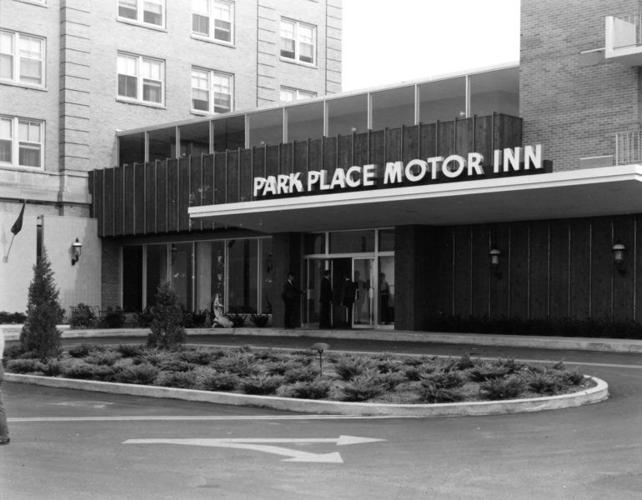 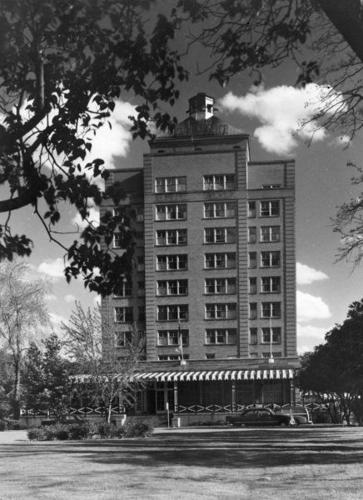 Special to Record-Eagle/Traverse Area District Library ArchivesThis mid-20th century image presents the Park Place Hotel as it looked between 1930 and 1960.

Special to Record-Eagle/Traverse Area District Library ArchivesThis mid-20th century aerial image of the Park Place Hotel was taken before the early 1960s, at which time Park Street was closed from State Street south to the alley between State and Washington Streets. In later years Park Street would be vacated south all the way to the Boardman River.

Special to Record-Eagle/Traverse Area District Library ArchivesThis 1906 image shows the wooden Park Place Hotel that was built in 1873 as the Campbell House. It stood at the same location as today's Park Place brick tower, which opened in 1930.

Special to Record-Eagle/Traverse Area District Library ArchivesThis mid-20th century image presents the Park Place Hotel as it looked between 1930 and 1960.

It has gone through changes before. The Park Place Hotel survived the Great Depression, bankruptcy, and growing competition since 1873.

Amy Parker, general manager of the Park Place of 18 years, said the hotel’s historical significance rests on its connection to Traverse City’s residents and visitors.

“What impresses me is people’s love for this place," Parker said, referencing the many "weddings, honeymoons and other events that occurred within these walls.”

In 1873 he opened The Campbell House (later renamed The Park Place) creating what today would be called a “vertically integrated” business of transportation and lodging. The Campbell House was a 50-room, white, three-story, clapboard resort-style hotel boasting verandas on its first two floors and a third-floor ballroom.

In 1879 Hannah, Lay and Co. purchased the business and renamed it the Park Place Hotel. In 1880 it became one of the largest hotels in the state outside of Detroit when a 60-room, three-story annex was built on the southwest corner of State and Park streets.

The Park Place boasted itself "the best tourist hotel in the North," and by the turn of the century it offered one-day rates of between $2 and $2.50 (approximately $30 in today’s money). In 1905, after the deaths of Perry Hannah, and his son, Julius T. Hannah, direction of the hotel passed to R. Floyd Clinch, son-in-law of Tracy A. Lay.

By the late 1920s Clinch had a vision of a much grander establishment. His dream was brought to reality by the Benjamin H. Marshall Co. of Chicago, and a huge name in architecture at the time, said local architectural historian Julie Schopieray.

"If you compare the Park Place to the 30-story Drake Tower in Chicago, also designed by Marshall, you can see the similarities.”

Unfortunately for Clinch, while construction started early in 1929, by the time the hotel opened in 1930, the nation was heading into the Great Depression. The slow economy must have affected business, but the hotel continued changing with the times.

Today's hotels must be continually updated in order to attract customers — the same was true in the 1930s.

A 1933 Record Eagle newspaper article gushed over its 150 "light, airy rooms" and "little timesavers" like a modern coffee-shop, barber- and beauty shops and of, course the view.

In 1934 the Record Eagle announced the opening of the Park Place’s “bar room and Rathskellar, where beer and sandwiches are served afternoons and evenings.”

A year later readers learned “a new feature of the hotel is the 49 Club in the basement where groups congregate afternoons and evenings for cocktails, beer and dancing.”

The 1940s and '50s Park Place was the hub of the city's social whirl, the favored place for weddings, Thanksgiving dinners, birthdays, balls and other events. During World War II Navy officers and their wives were billeted at the Park Place while the Navy tested early drones over West Bay.

“The entrance to the Park Place ‘Coffee Shop’ was off Park Street. I really liked the ‘feel’ of that entrance because it felt like a 'common man’s entrance,' as opposed to the ritziness of the rest of the business,” Hains said.

But the hotel ran out of steam. It closed in September of 1963, causing concern for the future of the entire downtown. But good news arrived by December, when Ann Arbor businessman and Traverse City native Eugene Power purchased the hotel and announced that it would be reopened as the Park Place Motor Inn.

“Hazelton’s design was extraordinary, and can be seen as a completely new concept in building history. He worked with Dow Chemical engineer David Wright, who developed the lightweight plastic styrofoam that covered the building,” Schopieray said.

The dome was torn down during the 2017-2018 renovations and one of its curved walls is part of the décor in the 90-seat Boardman Room.

Power also added a 10th floor for a restaurant and cocktail lounge, and an enclosed pool. The lobby, dining room, bar, coffee shop, and guest rooms were extensively renovated. A 60-room three-story wing was added to the west of the tower, near the same location that had been occupied by the 1880 annex. Parking for the hotel was doubled by raising the 1964 building above ground level.

These improvements led to the transformation of an entire block of Park Street. Hains points out that before those changes “Park Street ran ‘water to water,’ from West Bay to the Boardman River.”

He was in his late teens when it happened.

"I recall feeling a little ‘put out’ that a business could just alter a city street like that for their use,” Hains said.

He wasn't alone in his concerns about the closing of a city street. Many citizens did voice such worries at the time. After much discussion, city government granted Power’s request to vacate part of Park to accommodate the Park Place additions and that the benefit to the city outweighed the negative consequences.

The Motor Inn did well for a decade or so, until 1981 when Power sold the hotel to J. Daniel Hitchens, a local real estate investor. Hitchens’ management style was somewhat confrontational, and led to disputes regarding insurance, alcohol licensing regulations and local taxes. In 1987 he sold the hotel to flamboyant Chicago investment broker Arthur Curry, who had earlier bought the Perry Hotel in Petoskey. Curry announced plans to renovate and expand the hotel, but his financial operations were questionable. In 1989 his partners put the hotel into bankruptcy.

That bankruptcy likely posed the greatest threat ever faced by the Park Place. Salvation came from the Traverse City Rotary Club, which utilized funds from its Rotary Charities operations to buy the hotel at a bankruptcy court auction sale.

The hotel reopened in 1991 after a year-long, top-to-bottom renovation. In 1996 Rotary sold the hotel to a partnership consisting of Regency Inns Management Inc. of Sioux Falls, S.D. and Milestone Hotel Investments of Minneapolis, Minnesota.

Regency Hotels Management still owns the Park Place today, and has recently indicated its confidence in the hotel’s staying power by undertaking a $9 million renovation project. This features a 16,000-square-foot addition which includes the 500-seat Grandview Room and four smaller rooms, a pre-function area called The Gallery which will feature Park Place Hotel memorabilia and local artists’ work, and a street-side outdoor event space called The Patio. The Park Place is also upgrading its hotel rooms and constructing a new indoor pool, whirlpool and fitness room as part of the project.

If hotel founder Henry D. Campbell was somehow able to return to Traverse City, he surely would not recognize the hotel he started in 1873. But he certainly would sense something familiar about the spirit of its adaptation.