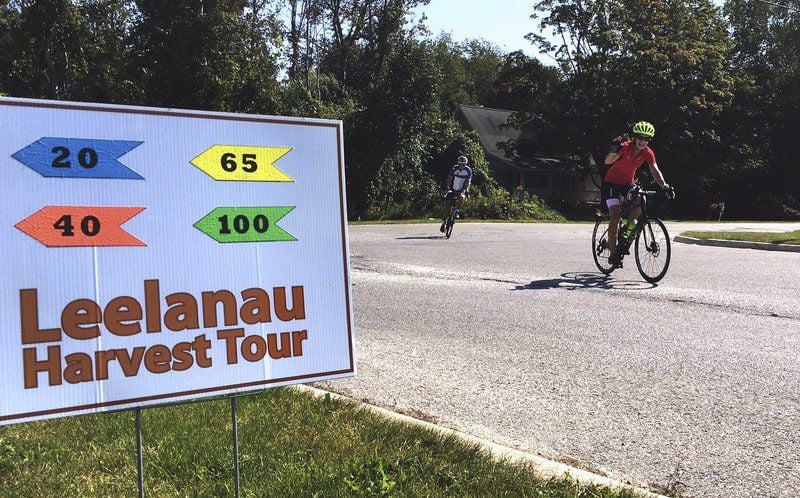 Special to the Record-Eagle/Bob DownesA Leelanau Harvest Tour sign guides cyclists along four routes ranging from 20 to 100 miles. This year's tour is Sept. 15. 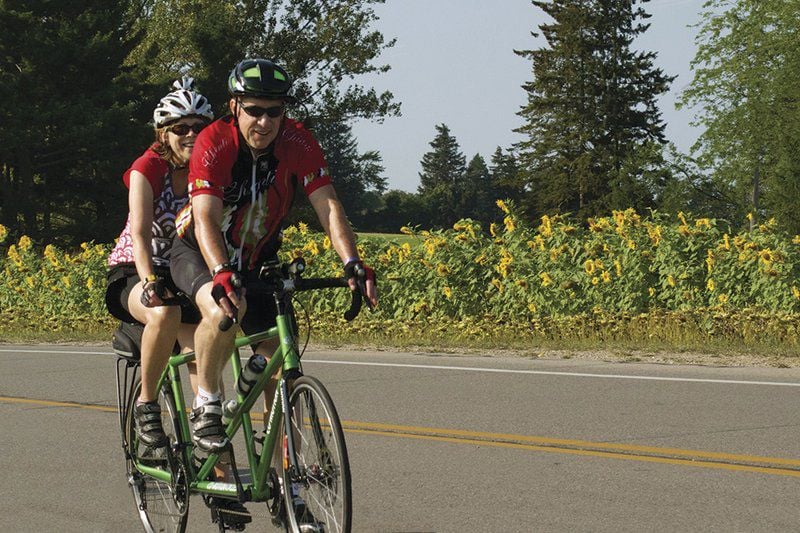 Special to the Record-Eagle/Joane MitchellSandy and Steve Mitton cycle past a field of sunflowers on the Leelanau Harvest Tour. This year's tour is Sept. 15. 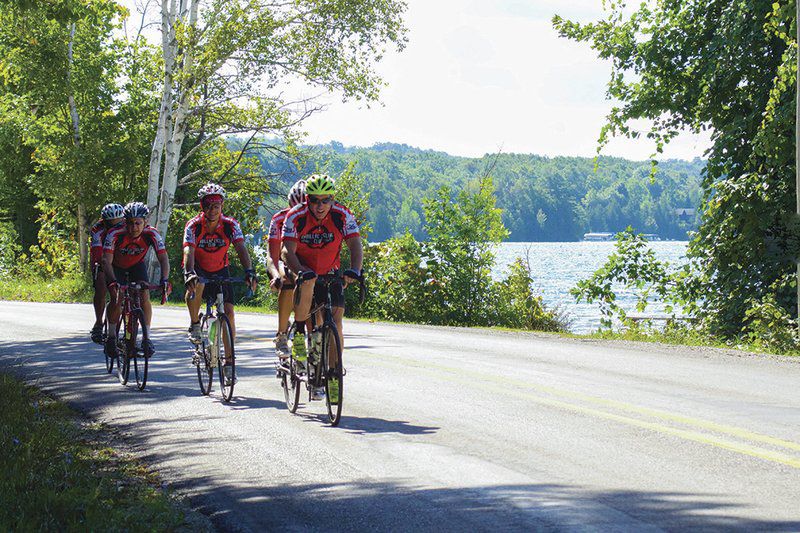 Special to the Record-Eagle/Joane MitchellMembers of the Cadillac Cycling Club round a bend during the Leelanau Harvest Tour. This year's tour is Sept. 15. 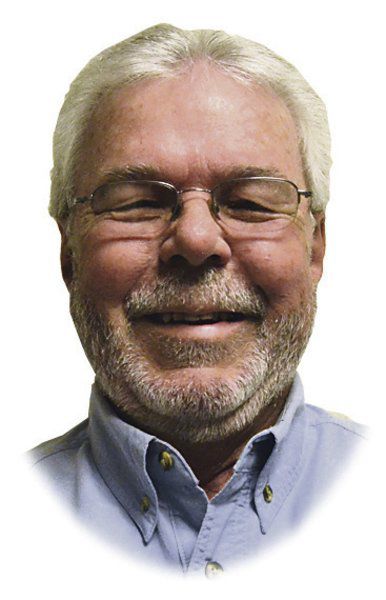 Special to the Record-Eagle/Bob DownesA Leelanau Harvest Tour sign guides cyclists along four routes ranging from 20 to 100 miles. This year's tour is Sept. 15.

Special to the Record-Eagle/Joane MitchellSandy and Steve Mitton cycle past a field of sunflowers on the Leelanau Harvest Tour. This year's tour is Sept. 15.

Special to the Record-Eagle/Joane MitchellMembers of the Cadillac Cycling Club round a bend during the Leelanau Harvest Tour. This year's tour is Sept. 15.

The Grand Traverse Region has long been known as a magnet for cyclists, with all the region has to offer in rail-to-trail conversions, little-traveled country back roads and mountain biking trails. Add to that our scenic lakes, shorelines, forests, vineyards and orchards and you have a backdrop for riding that few areas around the country can match.

One of the driving forces behind the recognition the region has received is the Cherry Capital Cycling Club (CCCC), which turns 35 years old this year. I think it was Dave Buck, president of the club during the 1990s, who coined the term “travelling at the speed of fun,” which has been the club’s motto since. Its mission is to promote cycling as both a healthy lifestyle and an alternative method of transportation.

The Leelanau Harvest Tour, which takes place Sept. 15, was the first sponsored ride the club put on. It also turns 35 this year. Funds raised from the event and from the Ride Around Torch, also an annual ride that started a couple of years after the Harvest Tour, are donated to area trail and cycling organizations to support the sport.

Since 2001 CCCC has donated nearly $300,000 to area groups. The majority of the funds have come from Harvest Tour proceeds, which help to maintain the Leelanau Trail among other projects, according to current club president Bill Danly.

“It’s an important event for our club. The ride normally attracts anywhere from around 400 to 1,000 riders, depending on the weather,” he pointed out. “We will have over 60 club volunteers running registration, food stations and support vehicles. Area merchants and restaurants make in-kind donations for the event. It’s truly a county-wide effort."

Danly said there are four different ride lengths to accommodate "just about everybody."

"We get many families that choose either of the two shorter rides," he said. "There are five food stops along the way, depending on the length of ride you choose, and a catered picnic lunch at Suttons Bay High School after the ride featuring a barbeque buffet and root beer floats. Add in the great scenery throughout the county, and it’s not hard to see why it has become such a popular ride over the years. We draw riders from all over the Midwest and around the country."

This year’s registrations include cyclists from California, Wisconsin, Illinois and Canada, he said.

On-line registration is open through Sept. 11, but registrations will be accepted at Suttons Bay High School, where the ride starts, on the day of the event.

"Normally, we get a lot of last-minute riders that wait until ride day to see what the weather is going to do,” Danly said.

One longtime cyclist that looks forward to the annual event is 86-year-old George Kuhn, who has made most of the rides since the early 1990s.

“I haven’t missed more than a couple since I began, and they were because of the weather. Living up here I’ve become a kind of fair-weather rider,” Kuhn chuckled. “It’s a nice ride to do with friends. Riding is a social event for me that I look forward to doing as often as I can at my age. I used to do the long rides, but now look forward to the shorter rides for the Harvest Tour. It’s a fun day.”

There are four routes from which to choose: 20, 40, 65 and 100 miles. It’s a day spent travelling at the speed of fun. Enjoy the tour, great food and scenery, companionship of other riders, and know that you are helping to support cycling in our community.