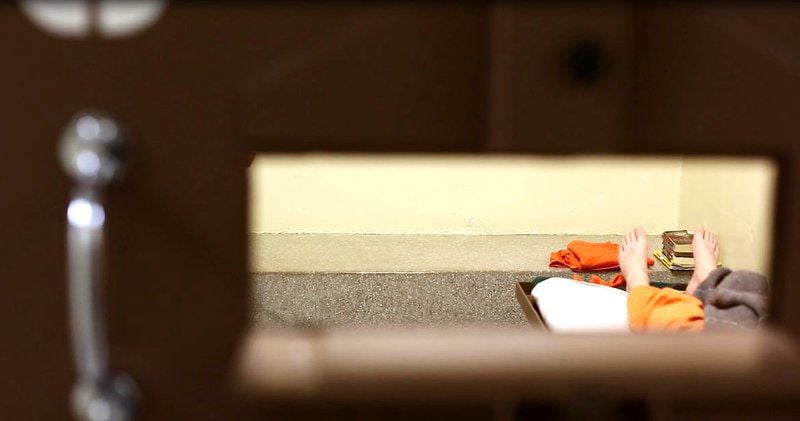 An inmate in the Grand Traverse County jail's observation cell.

An inmate in the Grand Traverse County jail's observation cell.

TRAVERSE CITY — Brandon MacMaster knows the next two months in Grand Traverse County’s jail will be demanding if he doesn’t receive the medication needed to treat his psychiatric conditions.

The local man — recently convicted on an operating while intoxicated and resisting arrest charge — on Friday learned he will spend the next few months in the county’s jail. He had already spent nearly 100 days behind those bars. It’s a punishment the 33-year-old is forced to accept.

He just wants his medicine.

“I am not taking any proper medicine for my mental illness,” he pleaded to Judge Thomas Power.

Macmaster was previously prescribed an antipsychotic medication used to treat bipolar disorders but his regimen was abruptly switched to Xanax — taken primarily for anxiety — after he was booked into the jail, according to his father, Greg MacMaster, a former state representative.

“There are some voids in state funding that’s creating problems for county jails to properly administer care either through additional therapists or counselors or psychologists,” Greg MacMaster said. “What they have now is not enough to address anything with any depth.”

Brandon MacMaster and several current and former inmates — as well as county officials and advocacy groups — seek solutions after two inmates in recent months were found hanging dead inside their cells amid reports of dozens more attempted suicides within the past six years.

Some contended the needs of the mentally ill — estimated to account for nearly 70 percent of inmates within the county’s jail — simply are not being met. Reports detailed more than 40 suicide attempts inside the jail since 2011. It’s a problem that needs to be addressed, said Sheriff’s Capt. Todd Ritter.

Others point fingers within the jail itself.

Brandon MacMaster — growing weary after Marilyn Lucille Palmer’s lifeless body was carried from the jail earlier this month — said inadequate mental health treatment is only exacerbated by “constant menacing and harassing” behavior from corrections officers who are responsible for ensuring their safety.

Inmates earlier this month found Palmer hanged from a pair of jail-issued pants in the shower area of her cell, a Bible flipped open nearby and her face turned shades of blue. The incident remains under investigation. Police officials estimated reports detailing the incident will be released later this month.

The death followed only a few months behind the day another inmate — Alan Bradley Halloway — hanged himself in his cell. A subsequent report outlined how one officer was fired after he missed several of his hourly rounds. Another, tasked with watching surveillance footage, has since resigned.

"I have not seen that video," Menzel said. "I was told by one of the staff members that we were very vulnerable because of that situation."

Ritter, with advice from his attorney, declined to confirm or deny the claim. He said every suicide or suicide attempt is carefully reviewed and insisted policies and procedures within the jail are adequate.

Former inmate Rose Sanford said notes passed to corrections staff are routinely ignored. She recalled dozens of crumpled and unread inmate request slips piled on the floor outside her cell. Other inmates are regularly stripped of their psychiatric medications and expected to behave, she said.

Sanford — in the emergency room with a self-inflicted wound that later required 52 stitches — was handcuffed at Munson Medical Center and carted directly to the jail, she said. She was cleared by corrections staff and within 24 hours had landed back in with the general population.

“That’s a flawed system,” Sanford added. “That’s the feeling of helplessness that happens in there.”

‘Giving them what they need’

Ritter said jail policies require officers to tend to inmate request slips during every hourly round. Some — like requests to sharpen a colored pencil — fall lower on the priority list than genuine mental health concerns. He said he would be surprised to hear those slips are being ignored.

“We have to rely on the mental health treatment providers,” Ritter said. “The problem we’re having now is with those that do not present a threat or let us realize they’re having a problem.”

Officers — not licensed medical professionals — screen every inmate when they arrive at the jail, Ritter said. If they’re deemed a suicide risk, they’ll undergo a more detailed assessment from Northern Lakes Community Mental Health. If not, they head into the general population.

A counselor could then determine the inmate needs to be hospitalized but a national shortage in mental health facilities equates to a sometimes-lengthy waiting period. Ritter said he remembers one inmate who spent seven months in an observation cell before a psychiatric bed became available.

“It’s difficult just in general,” said CMH CEO Karl Kovacs, noting violent offenders struggle the most to find placement. “Our staff in crisis services — not necessarily for services specific to the jail — will have to make multiple calls to hospitals to find availability.”

Inmates who don't pose an immediate risk to themselves or others but still seek mental health treatment are then referred to counselors — but only if they’ve previously been a CMH patient. Medicare and Medicaid guidelines largely block medical access for the incarcerated, Ritter added.

CMH — which receives the bulk of its funding from federal Medicaid dollars — is legally barred from treating those who haven’t already been a patient. Kovacs said services are financially limited but also entirely voluntary at the jail. There’s no contract mandating they stick around, he said.

An independently contracted psychiatrist spends about 20 hours per week at the jail to fill in the cracks, Ritter said. But advocacy groups have long contended the county could do more. Jail Chaplain Tom Bousamra said a full-time psychiatrist could go a long way to curbing suicide attempts.

“I think the corrections staff is stressed out,” Bousamra said. “They’ve always tried to build control. It’s not about that at all. The more control they have, the worse things get. It’s about giving them what they need and what they need is psychiatric medication.”

Bousamra serves as the chairman for Before During and After Incarceration. The local group of advocates — which recently filed to become a nonprofit corporation — aims to promote alternatives to jail sentences and provide restorative programming within the walls of the county’s jail.

Vice chairwoman Toni Stanfield said the county has long underfunded mental health treatment for inmates within the jail. She contended the $682,000 paid annually to CMH — which Kovac said leverages $22 million in annual services countywide — could be far better spent.

“There are people who are clinically depressed and they cannot see a psychiatrist until they’ve been sentenced,” Stanfield added. “They could sit in jail for four months with no medication. … There tragedies are happening because the system is not equipped to deal with psychiatric crises. They’re just not ready.”

“I don’t think there are bad guys here,” Stanfield said. “I think there are people who are trying to do their best with very little resources. … Sometimes communities rally together to make programming work. That’s what we want. If there’s one person that suffers in the community, we all suffer.”

The shift to Xanax is making it difficult for Brandon to cope and his father is growing concerned for his safety during the remainder of his brief stint in the county’s jail. Brandon can’t necessarily make the “right decisions” without his medication and that could come back to haunt him, Greg said.

“The sheriff’s department will do whatever they can to cover their own ass and make sure they don’t get in trouble but when you see this repetitive nature of suicidal behavior, it’s a cry for help,” Greg MacMaster said. “If we’re trying to rehabilitate people, this isn’t how we do it.”

In an article on March 23 and an editorial on March 25, the Record-Eagle once again provided inaccurate and misleading information.

TRAVERSE CITY — Grand Traverse County officials hope to increase the safety of inmates at the county jail by making modifications to shower areas.