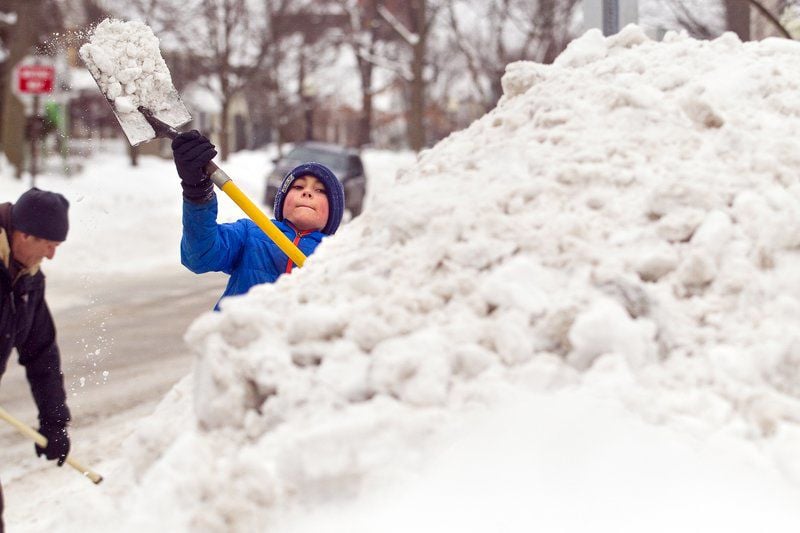 Ezra Belanger, 10, shovels snow in the driveway of his Seventh Street home with help from his grandfather, Tom Fay, on Wednesday afternoon in Traverse City. 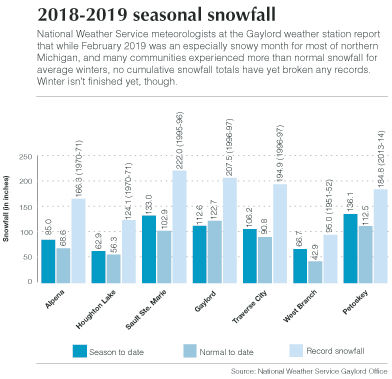 Ezra Belanger, 10, shovels snow in the driveway of his Seventh Street home with help from his grandfather, Tom Fay, on Wednesday afternoon in Traverse City.

TRAVERSE CITY — It became a wet and snowy winter, at least when it came to the latter half of the often five- or even six-months-long season in northern Michigan.

National Weather Service officials reported recent conditions in Traverse City amounted to the fourth wettest winter on record, while February alone ranked as the second wettest and second snowiest on record. It means the statistics verify what anecdotally has seemed like a tough season, with never-ending snow flurries and taller snowbanks than most winters delivered in recent memory.

And winter isn't even over yet.

"We were kind of in-between jet streams in the early part of winter and it wasn't very active," said Andy Sullivan, NWS meteorologist at the Gaylord weather station.

An abrupt change to what began as a mild winter arrived the second week of January, Sullivan said, when storms repeatedly blew across the Great Lakes region, punctuated by intermittent lake effect snowfall. February alone brought 40 inches of snow accumulation to Traverse City, and current data shows 106.2 inches of snow has fallen season to date, according to NWS statistics.

"Once it started, it really started rocking and rolling and never let up," Sullivan said.

Beyond the persistent snowfall, there have been individual events that only piled on. For example, the two-day storm that gripped the region with both snowfall and wicked, whipping winds on Feb. 24 and 25 brought absolute havoc to many rural roads in the area.

Current snow pack depths vary from place to place across northwest Lower Michigan, from 9 inches in Frankfort and 13 inches in Traverse City, to 24 inches in Gaylord and as deep as 27 inches in Pellston. Upper Peninsula snow depths range between 26 and 42 inches, NWS records show.

Those depths make for ideal conditions for winter tourism, especially snowmobile riders who take to the region's groomed trails.

"It actually looked like it wouldn't be a very good season at first," said Jeff Fancy, owner of Snowblitz Snowmobile Rentals at Ranch Rudolph. "It was looking pretty dismal but it surprisingly saved itself."

Fancy said current snow depths are so deep that some of his customers have repeatedly called for his help to free them after they ride his snowmobiles off groomed trails and become stuck in often waist-deep drifts. "There is a lot of snow out there," he said, laughing.

Sullivan said weather conditions on approach include an expected storm this weekend, to start with rainfall on Saturday and then switch to a wintry mix overnight and become snowfall by Sunday morning. More snow showers are forecast to arrive after that, he said, followed by yet another storm system expected to deliver more rain, sleet and snow.

"It's a roller coaster, basically, over the next week," Sullivan said.

Ice jams on area rivers may become a concern, according to a NWS hazardous weather outlook posted Friday for northern Michigan.