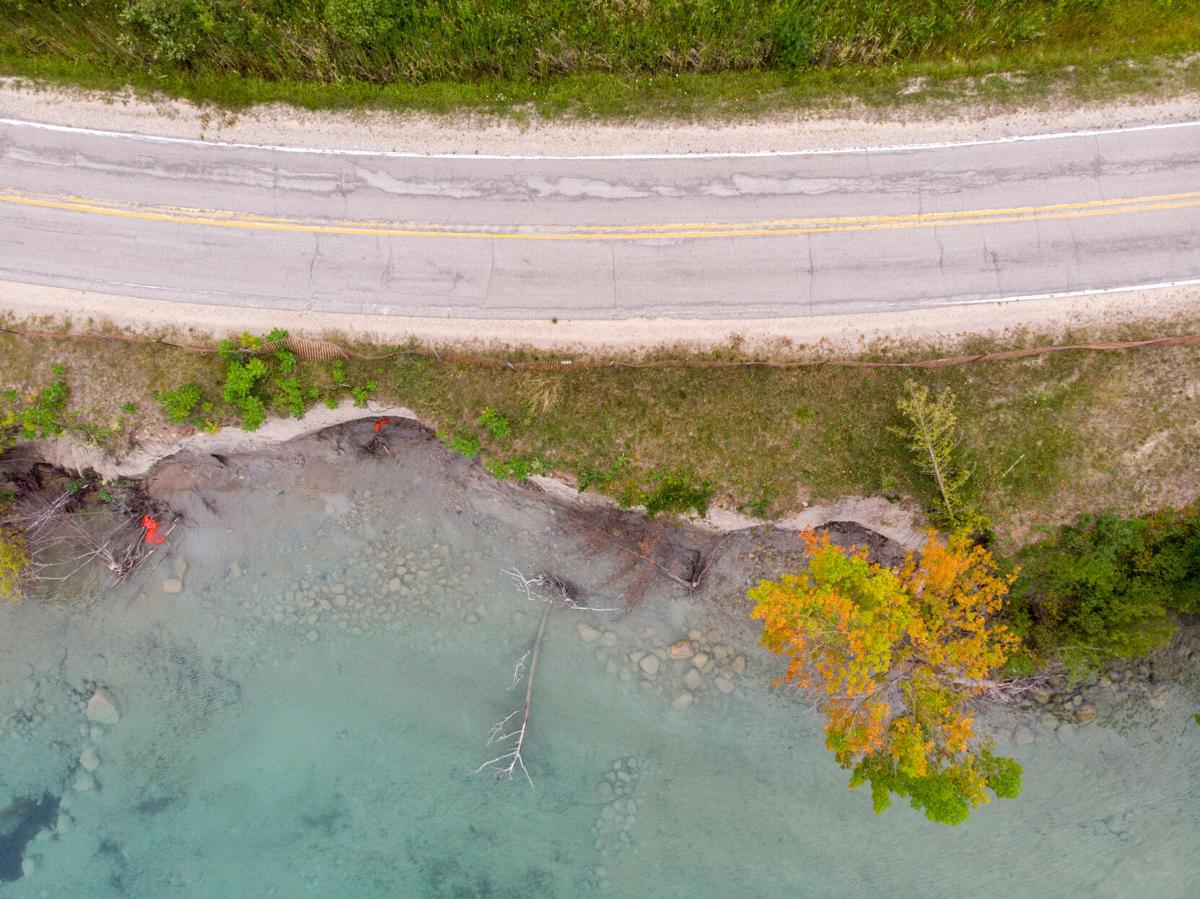 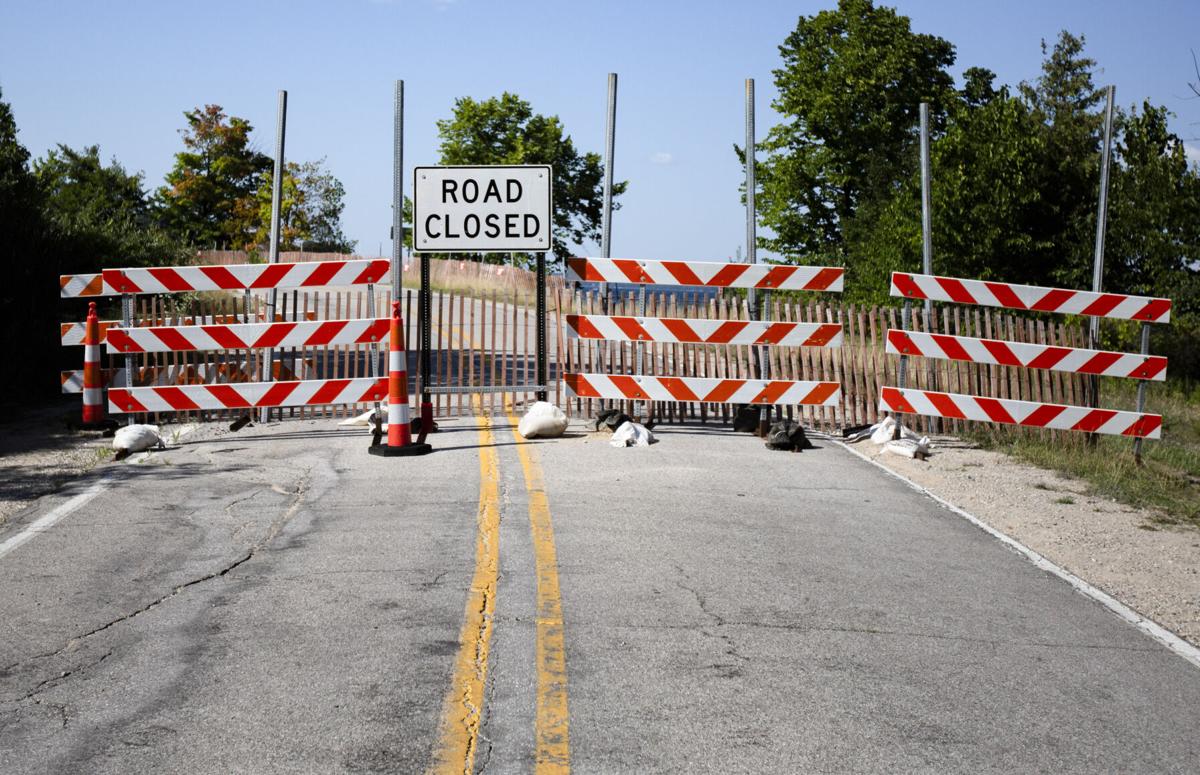 Barricades block traffic on Bluff Road in Traverse City on Friday. A section of the road was closed in January due to erosion damage. 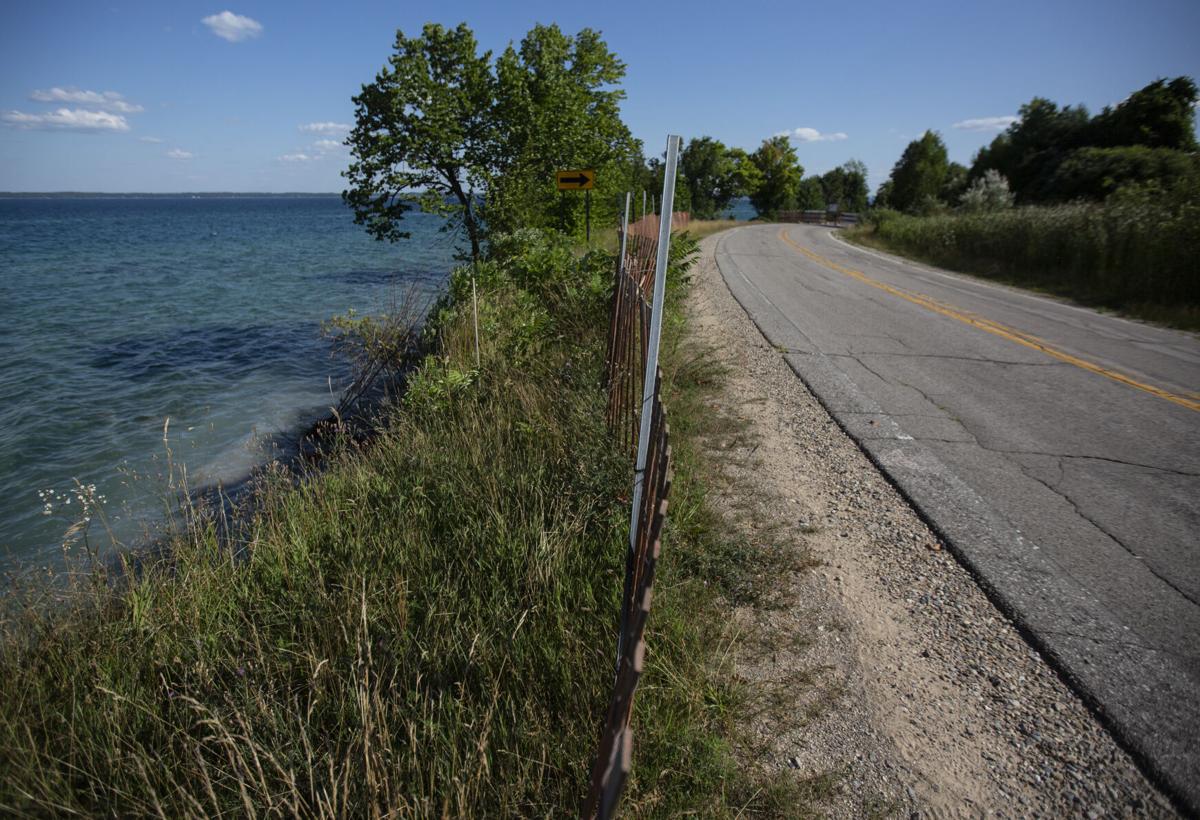 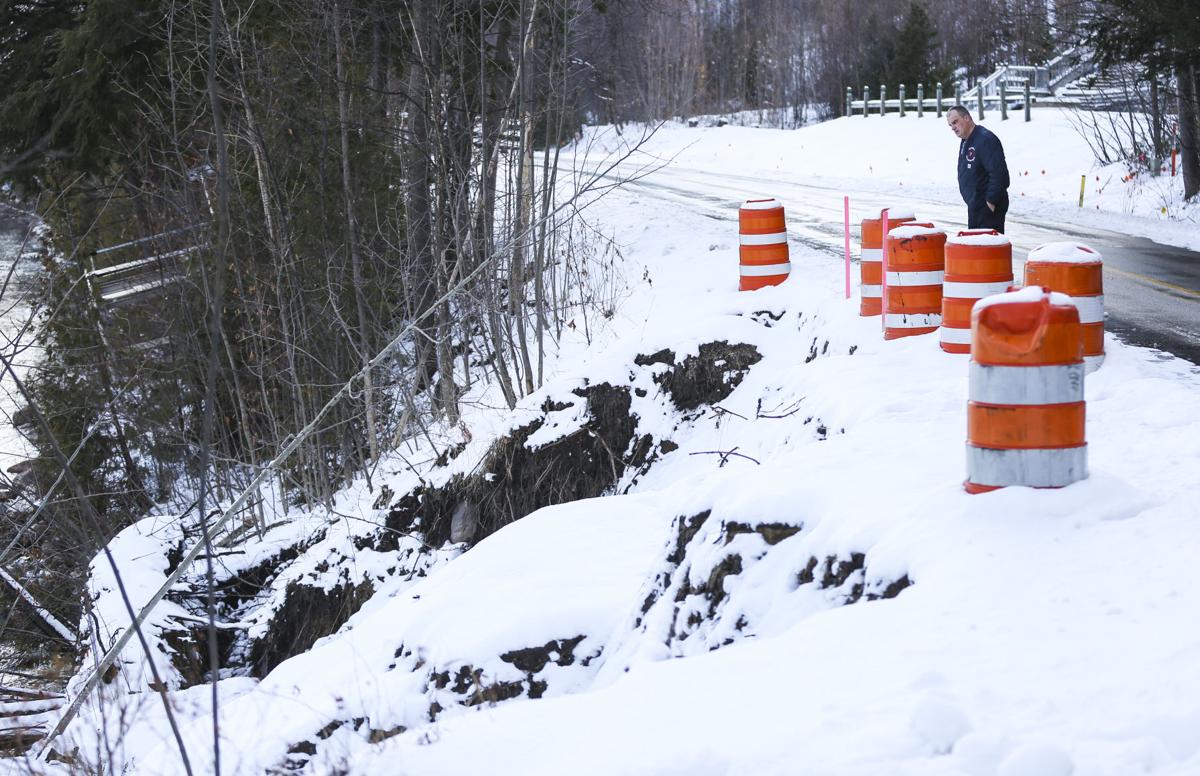 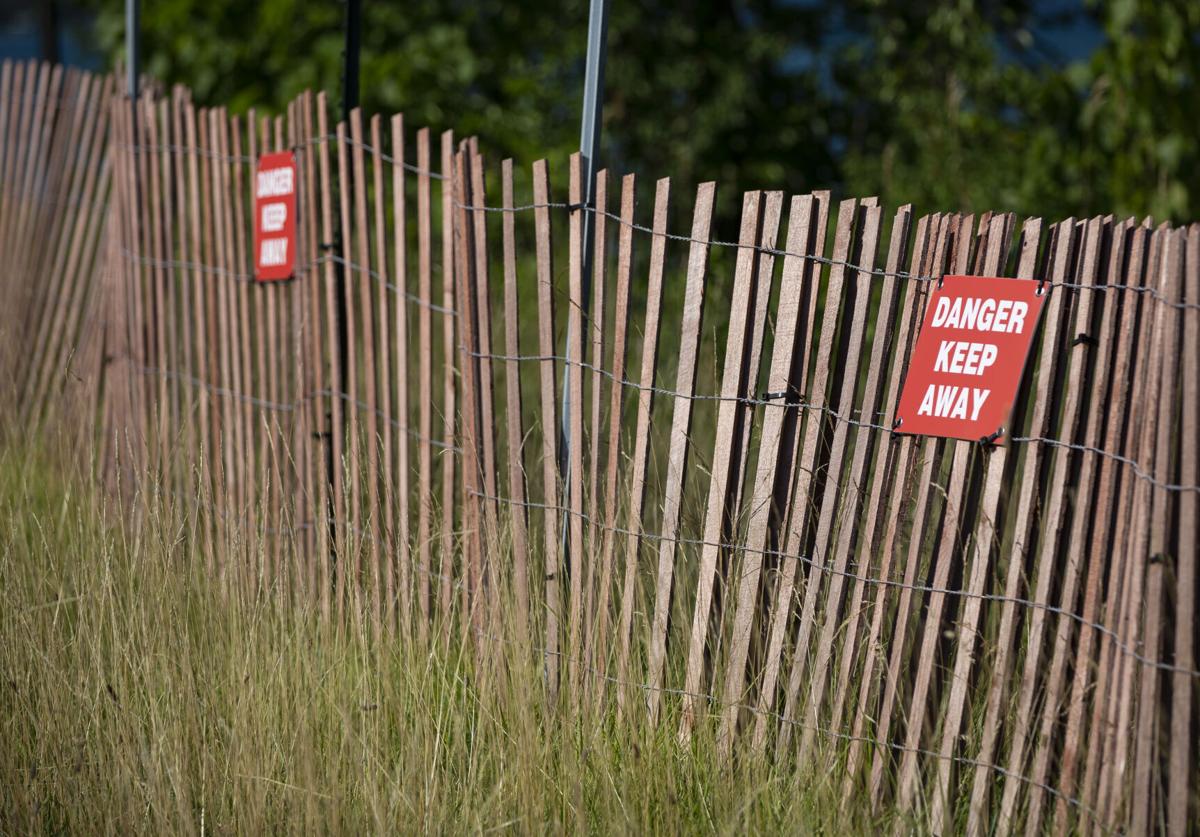 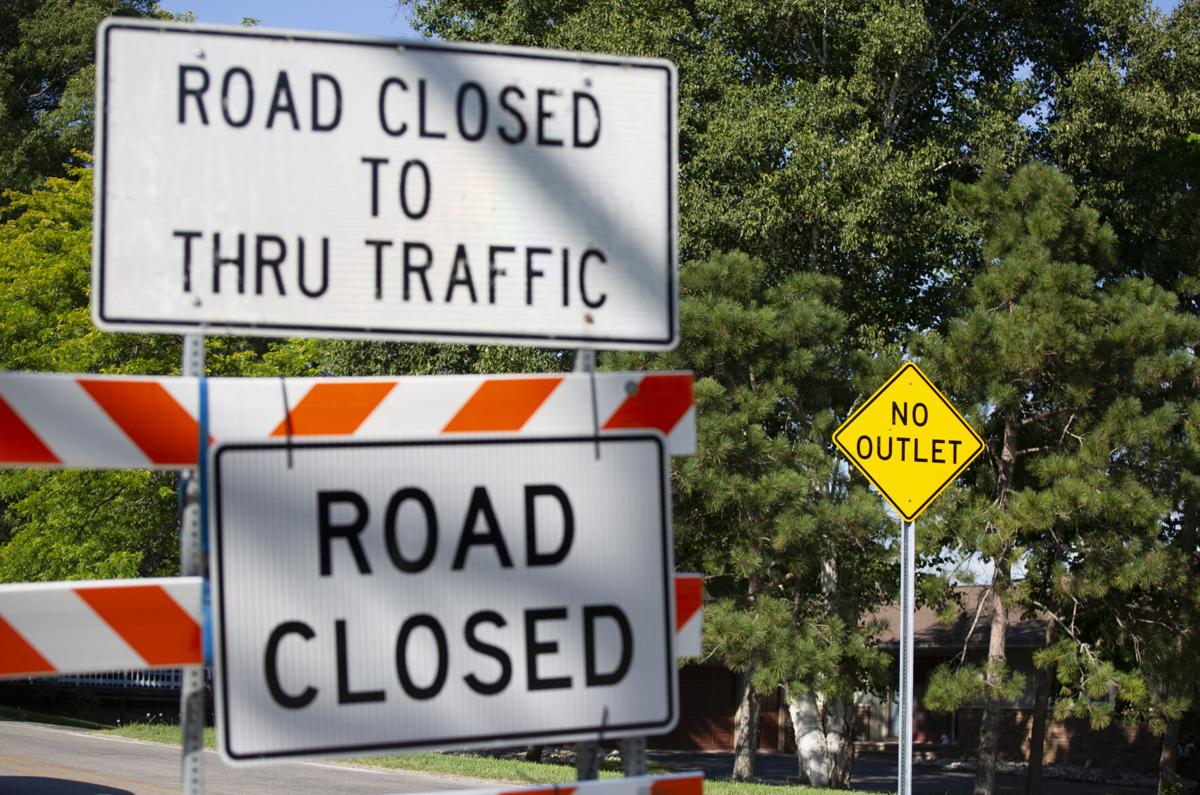 Signs note road closures on Bluff Road in Traverse City on Friday. A section of the road was closed in January due to erosion damage. 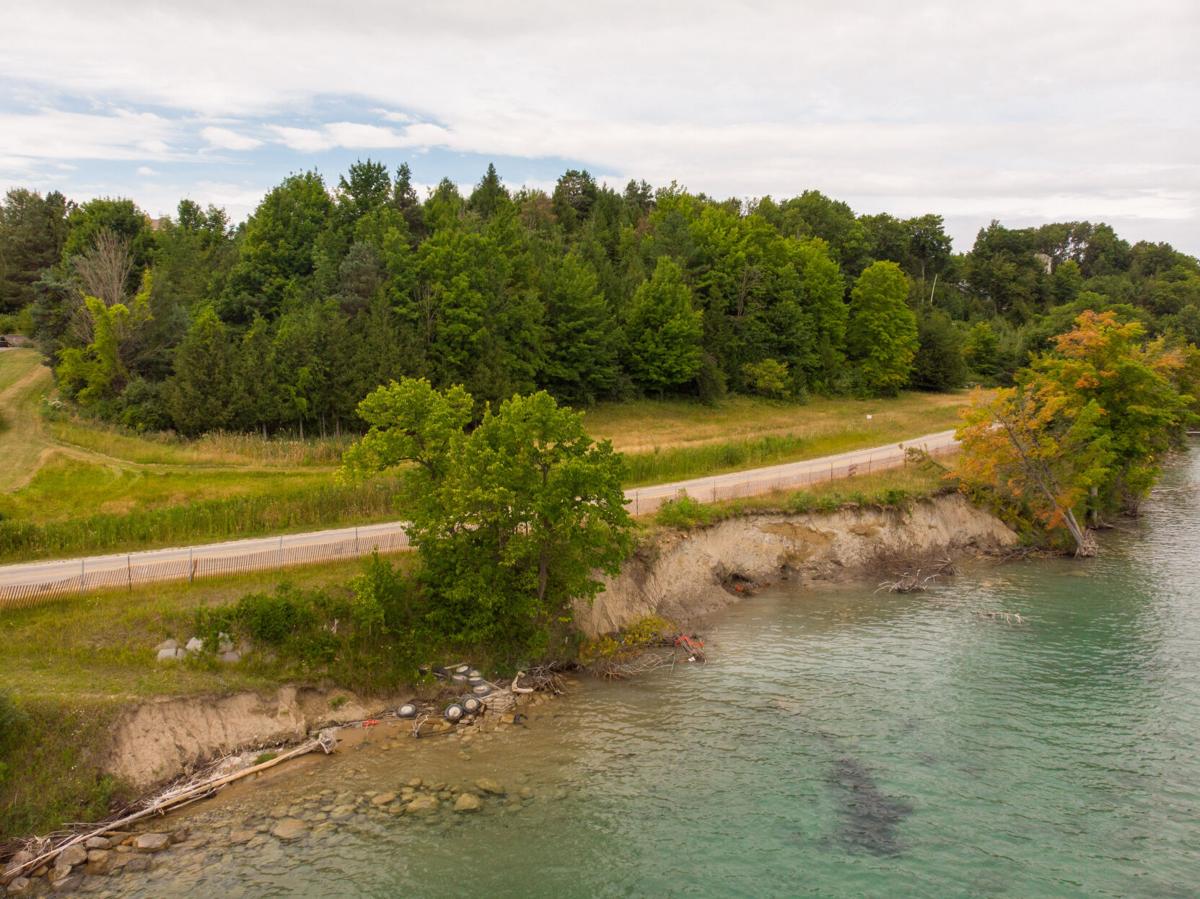 Barricades block traffic on Bluff Road in Traverse City on Friday. A section of the road was closed in January due to erosion damage.

Signs note road closures on Bluff Road in Traverse City on Friday. A section of the road was closed in January due to erosion damage.

TRAVERSE CITY — A January prediction by a road official that the closure of Bluff Road on Old Mission Peninsula could be long-term proved true and then some.

“With the sheer height of that bluff, it’s going to be an engineered project to deal with,” Grand Traverse County Road Commission Manager Brad Kluczynski said at the height of winter.

This summer Kluczynski and county road engineers brought a representative from the state’s Department of Environmental Quality to the site and now await his response.

“We can’t just go out there and start dumping crushed rock into the water,” Kluczynski said Monday. “We need a permit for anything we do and we need to make sure we submit to them the standard plan for this type of soil loss.”

It’s unfair to put the cost on township residents’ shoulders, he said.

“They keep saying, ‘well, we don’t have the money’ and ‘call the township,’” he said. “And then, well, what are we going to do, assess those people for a lot of money on a road that’s owned by the Grand Traverse County Road Commission?”

Kluczynski estimated the fix could cost $2.5 million for the half mile of compromised road.

“We have other roads within the network that need substantial work too,” he added. “Normally we are not in the position to spend that kind of money out of local funds.”

Restrictions on how the road commission can spend its money puts any Bluff Road substantial repair project in a legal bind, Kluczynski said. Road millage money is for maintenance and routine repair, not new construction or extensive repair. The damage does not qualify as an emergency, since water levels have been rising for some time, he said.

The Road Commission’s Motor Transportation Fund dollars policy is to go to a 25 percent match of these state funds but no higher, Kluczynski said. That match could be applied to whatever funding the township can come up with — the local government may be eligible for grants the road commission isn’t, for example.

But until someone or some agency provides 75 percent of the project cost, the road commissions’ hands are essentially tied, Kluczynski said.

Road Commissioner Jason Gillman agreed that paying for such an expensive fix was a challenge, especially when lake levels still could rise.

“We’re in a situation where obviously we do not have any money in the budget that could fix Bluff Road,” Gillman said. “We don’t know where the lake levels are going and we can’t effect any repairs until the lake levels go down.”

The county’s share of $125 million in state funding that could’ve fixed the road disappeared when COVID-19 blew a $2 billion hole in the state budget, Kluczynski said.

Mike Skurski, Mission Hills Homeowners Association president and Bluff Road property owner, blamed the road commission for letting the erosion get so bad. The HOA’s beach access off Bluff Road is impacted by the closure and the group paid $20,000 for a fix last summer.

Skurski accused the road commission of missing several chances to stop the erosion, especially after HOA flagged concerns in late September, he said.

But Kluczynski countered the blame lies with those who owned land between East Grand Traverse Bay and the road right-of-way. They let their property wash away for years, he said, and by the time erosion reached the road right-of-way, the problem was way bigger than the road commission was prepared to handle.

Road Commission Chairman Carl Brown previously said tree-cutting was not to blame for the erosion, as some residents suggested.

Some Bluff Road residents fiercely fought the road commission’s tree cuttings along the road in 2017, and while Manigold acknowledged they didn’t cut along the eroding stretch — he believes someone else did several years back — he still pointed to the importance of trees in stabilizing slopes.

Gillman said the damage is more complicated than a repair or repaving will be able to solve.

“It’s not just a road issue,” Gillman said. “It’s an erosion issue that involves a number of agencies.”

Manigold echoed this, and said there are springs in the hillside and other issues that prompted him to involve the county drain commissioner.

Underground water flows caused a string of sinkholes to open near Paulette Kloes’ home, starting at the edge of her yard and moving into the road and leaving 6-foot-deep cavities behind. She lives north of where Bluff Road has been impacted the worst and the road commission fixed the sinkholes — the latest work is holding so far.

Kluczynski said a contractor will install a second drain soon, and it’s one of 10 erosion problem spots the road commission fixed on the peninsula this year.

Kloes said she’s concerned that erosion problems could close Bluff Road to the north of her home. She has older neighbors and it’s important that emergency vehicles can reach them. Plus, she also worries about her own access.

“That’s our biggest concern, is can I get out of my driveway?” she said.

A review of the minutes from Road Commission meetings this year show no public comment related to Bluff Road, the Record-Eagle found.

“I do get the calls,” Gillman said. “Are people frustrated? Yes and I hear it. Trust me, I don’t blame them. I would much prefer to have Bluff Road open all the way through.”

In the meantime, road closed signs alert drivers to the closure, which at this point is basically all the road commission can do, he said.

Kluczynski said he expects to hear from EGLE rights of way and erosion staffer Luke Golden this week.

“We’re in preliminary discussions right now, we’ve done the site inspection and we’ll have to see what the best route is for repair or reopening,” Golden said. “This is happening all up and down, especially the western shore. Nature is going to do what it’s going to do.”

Golden said the next step, after further discussions with road commission staff, would be for the road commission to apply for a permit through the state’s online MiWaters application process.

It’s likely up to the Army Corps of Engineers to determine whether any road fixes are allowed, Kluczynski said. If not, the best the road commission can do is add a turnaround to each end of Bluff Road.

Manigold said he’d like to see a comprehensive study of the road, and for the road commission to take proactive measures instead of fixing problems as they arise.

In the meantime, frustration grows.

“The residents of Old Mission are a little miffed because of the M-37 trade off and also Bluff Road,” Gillman added. “We’re giving as much attention to them as we humanly can. We’re really trying to do our best for the people of that township.”

The Michigan Department of Transportation wants to transfer jurisdiction of 17.3 miles of M-37 on Old Mission Peninsula to Grand Traverse County — that process is on hold while the department works to reschedule a public hearing, as previously reported.

The stretch of road had earned designation as a Pure Michigan Scenic Byway and the move was opposed by the Peninsula Township Board, which passed a resolution in 2019 and wrote to Gov. Gretchen Whitmer stating as much.

No plans for eroded section of Bluff Road