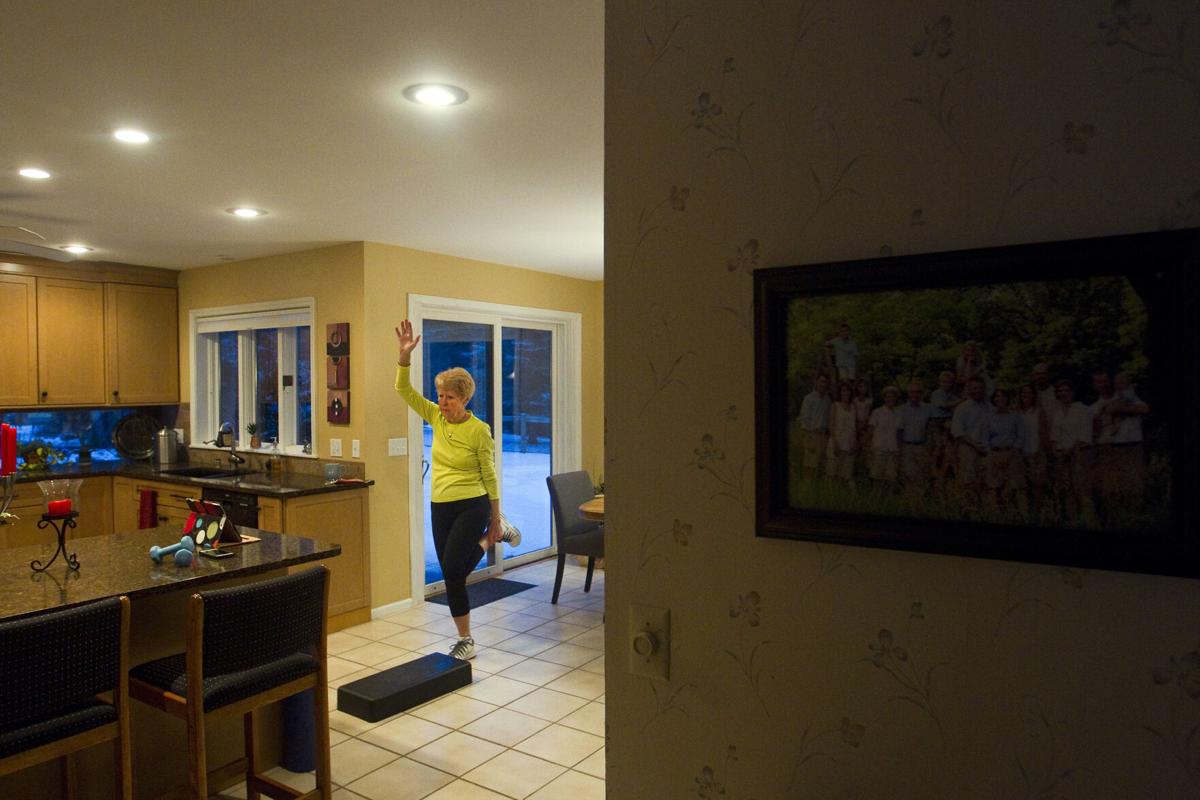 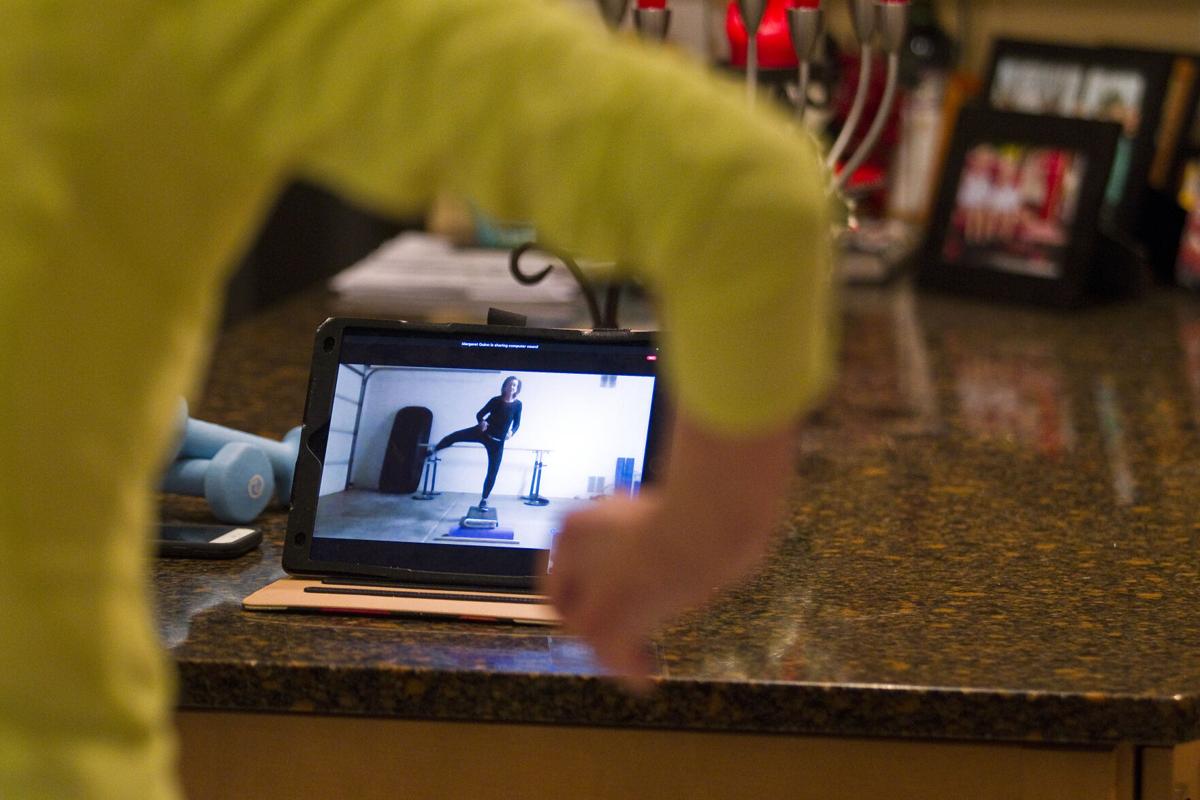 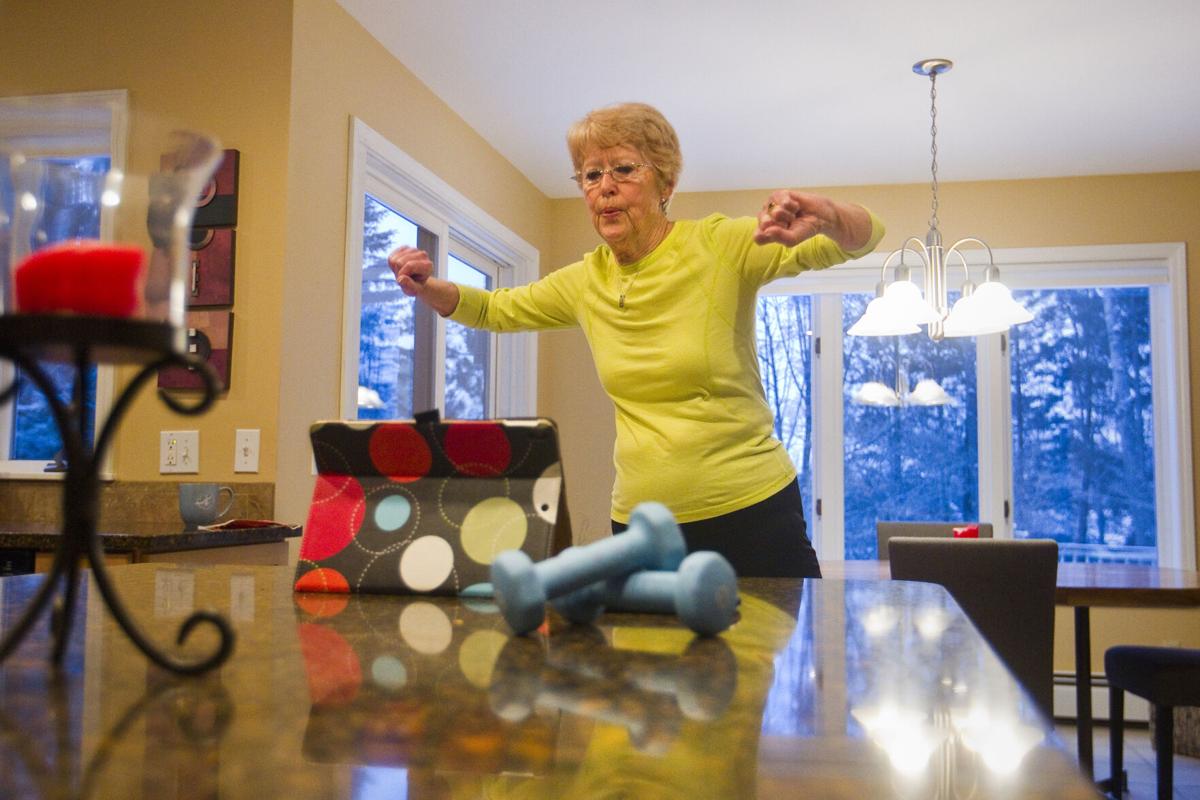 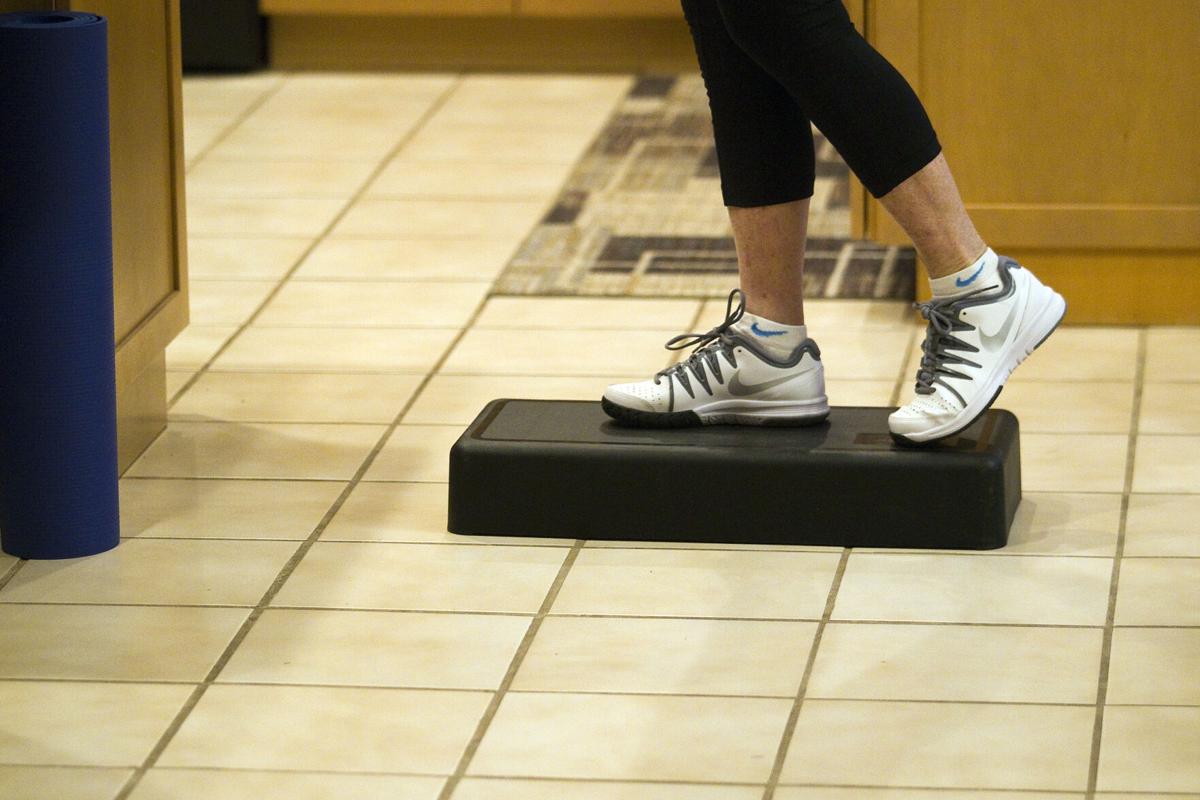 Sharon Glenn participates in an online step class in the kitchen of her Traverse City home. 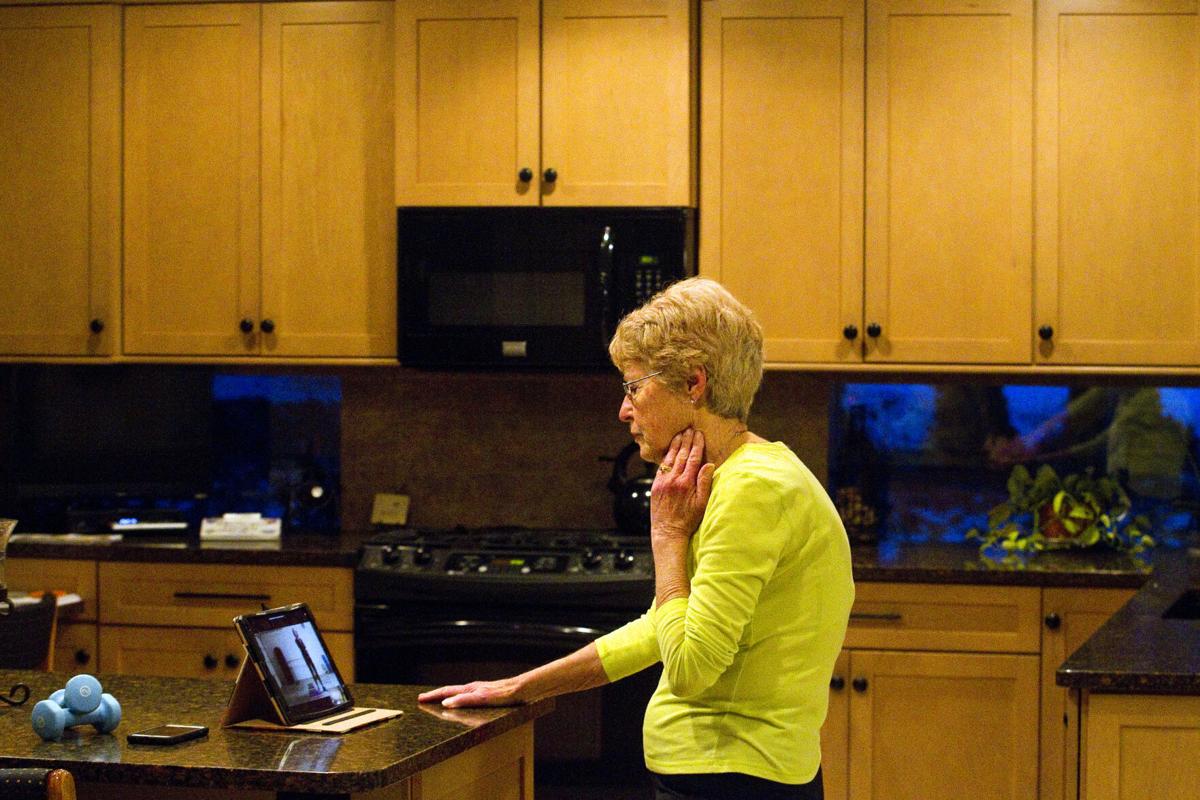 Sharon Glenn checks her pulse during an online step class from her Traverse City home.

Sharon Glenn participates in an online step class in the kitchen of her Traverse City home.

Sharon Glenn checks her pulse during an online step class from her Traverse City home.

TRAVERSE CITY — Before her 8 a.m. step class officially starts, Sharon Glenn makes sure to show up a little bit early.

Her early arrival at such an early time of the morning goes beyond common courtesy. It’s a chance to visit with the instructor and her classmates, keep up with what’s going on and even to casually learn how the previous day went.

“That just keeps us connected,” the 78-year-old Glenn said, who has been participating in continuing education classes through Northwestern Michigan College for about 15 years.

Connection is also key because Glenn is working out in her kitchen in her home, despite being just a mile away from the NMC campus.

One of the class participants, Jean Howard, is in Florida. Her instructor, Maggie Quinn, is in the garage of her rented home in Arizona, where it’s 6 a.m. local time and temperatures are often in the 30s. The first class she taught from two time zones away in December the thermometer was in the mid-20s.

The COVID-19 pandemic has forced wellness classes into the virtual world. Participants are finding the remote classes have far more benefits than the obvious physical ones.

“It’s good mentally as well as physically, for sure,” said Glenn, who usually takes fitness ball, step or barre classes.

“It’s helpful during these times for people to get through in their most present, mindful ways possible — mentally, physically and spiritually,” Bennett said.

Other yoga studios and gyms offer online wellness classes as a way to keep facilities in business, staff employed and participants engaged and active.

Bennett teaches virtual classes in yoga and meditation through her practice based in Acme that is “now centered where my computer is.”

Bennett also offers virtual classes through Grand Traverse Resort and Spa and NMC. Among her offerings is a 30-minute midday meditation class and an hour-long class on Wednesdays focused on an elevation of the conscious mind and meditation.

“I really think it’s more essential than ever for people to be grounded and centered,” Bennett said. “As centered as we can.”

The 8 a.m. step class Glenn participates in is one of 15-plus weekly classes offered by NMC, which transitioned to Forever Virtually Fit for the fall semester. The winter session began Jan. 4.

Laura Matchett, the director of Extended Educational Services at NMC, said fall enrollment for the virtual wellness classes was on par with in-person sessions from 2019.

“It was just about the same as the previous fall,” Matchett said. “We were surprised. We thought there might be a decline.”

Matchett said a lot of the credit for the participation numbers belongs to the instructors.

“Our instructors have been with us quite a while and they have quite a following,” Matchett said. “Once people got everything set up, it was not as intimidating as they thought. It’s really a nice way to go.”

“It can still be fun when you’re doing it in a safe manner the way we’re doing it.”

“It’s morphed into what is being offered to students based on the aging process because I’ve aged right along with them,” Quinn said.

So changing from in-person to virtual classes is the latest transition at NMC.

Forever Virtually Fit has also expanded its base of instructors without the physical limitations.

In addition to allowing Quinn to instruct from Arizona, NMC’s program also has another instructor, Ginny Mello, working from Denver.

“Teaching virtually has allowed us to expand our repertoire of instructors,” Matchett said.

Forever Virtually Fit classes are also recorded and available for three days. Enrollment is also on a household basis, so Sharon Glenn’s husband, Jerry, can jump into a fitness class for no additional charge.

Forever Virtually Fit has three levels of classes, including The Commitment which runs from Jan. 4 through May 28 for $425. Enrollment also includes one-on-one Zoom sessions to make sure the technology is up and running properly.

“It works out to about $5 a class, based on five to six classes a week,” Matchett said. “It depends on how many classes you take; but that’s what we figured it on.”

Sharon Glenn said the advantages of virtual workouts are it can be done in the comfort of your home in a space that works best, like when she moved sessions outside in July and August adjacent to the pool.

One negative is it can be more difficult for the instructors to catch form errors from the participants.

But she said the positives win out, especially for those not comfortable around a lot of others during the pandemic. There is also no need to get bundled up, warm up the car and venture out in the cold weather.

Now it’s slip into some comfortable attire and let the workout begin.

“It’s the best that we can do,” she said. “Yes, it’s good because we’re still connected. Then those that don’t want to leave their house, it is for them.”

NMC will also offer Coffee Chats over 14 weeks on a variety of topics. There are some outdoor wellness classes featuring in-person hikes.

Other virtual discussions are planned including wide-reaching topics like Life After Death, Compassionate Journeys: Lessons from My Work with the Dying and Cartwheels in the Rain – Finding Faith in the Wake of the Unthinkable.

While a return to in-person wellness classes is on hold at NMC, Glenn said she plans to keep on with the virtual classes first thing in the morning. Except when Monday morning volunteering pushes into her normal start time.

“I usually do it live just because it gets my day going,” she said.