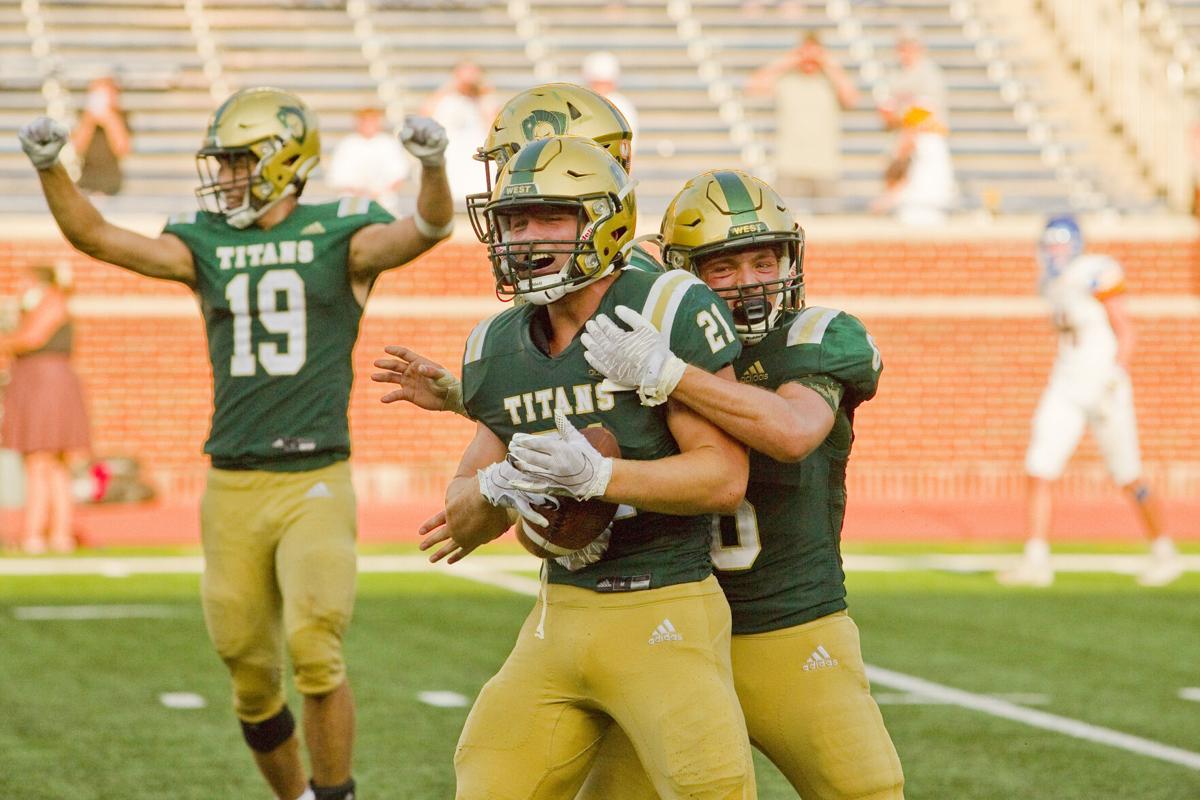 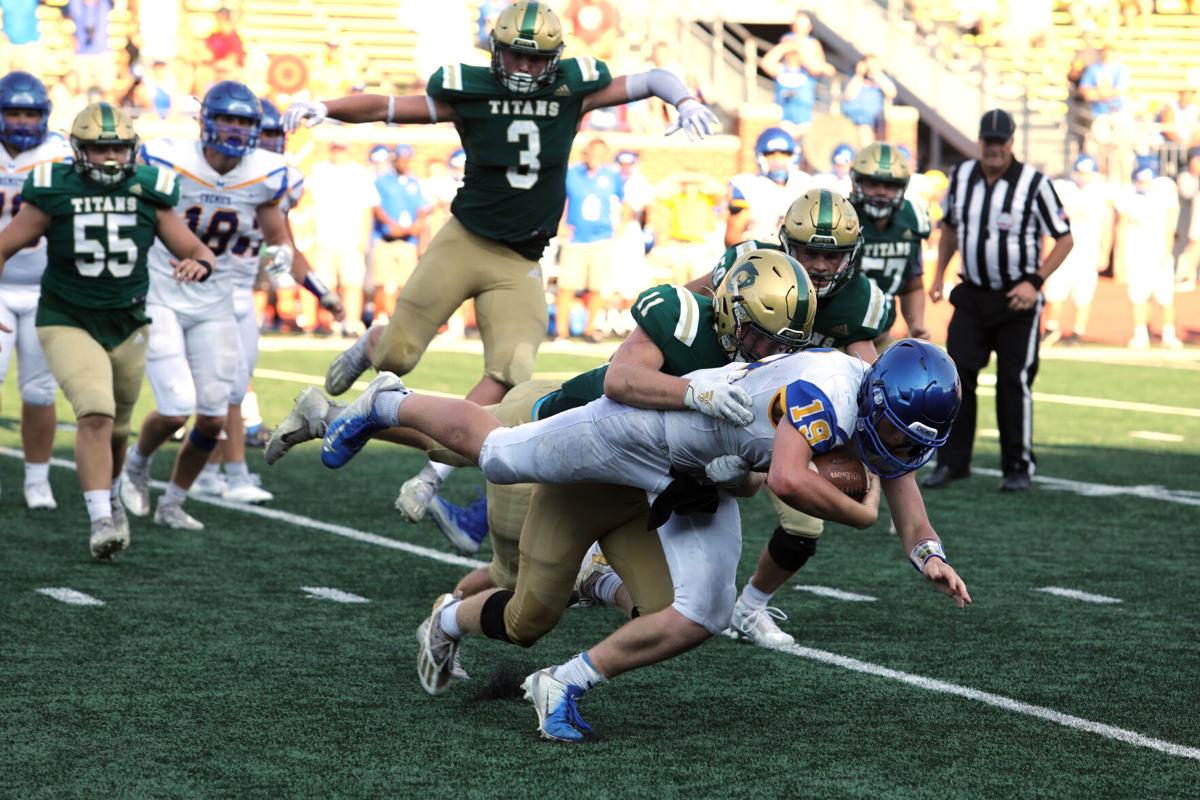 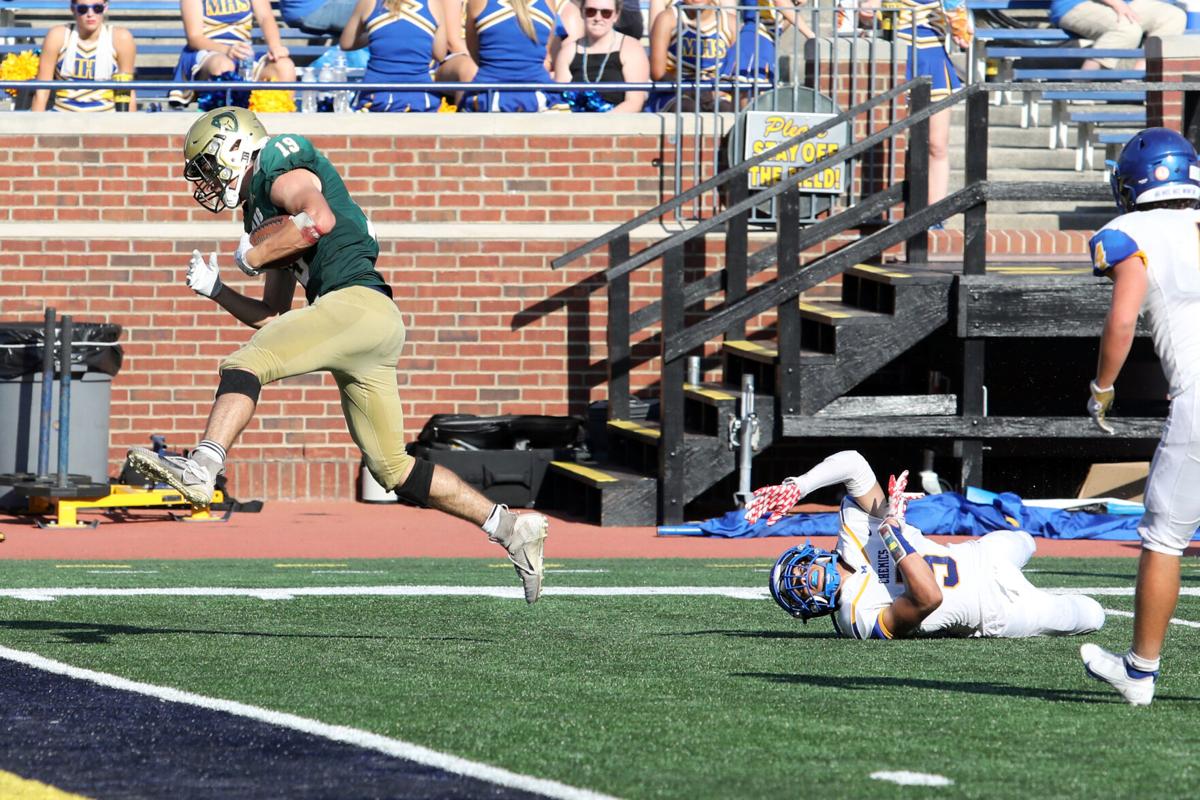 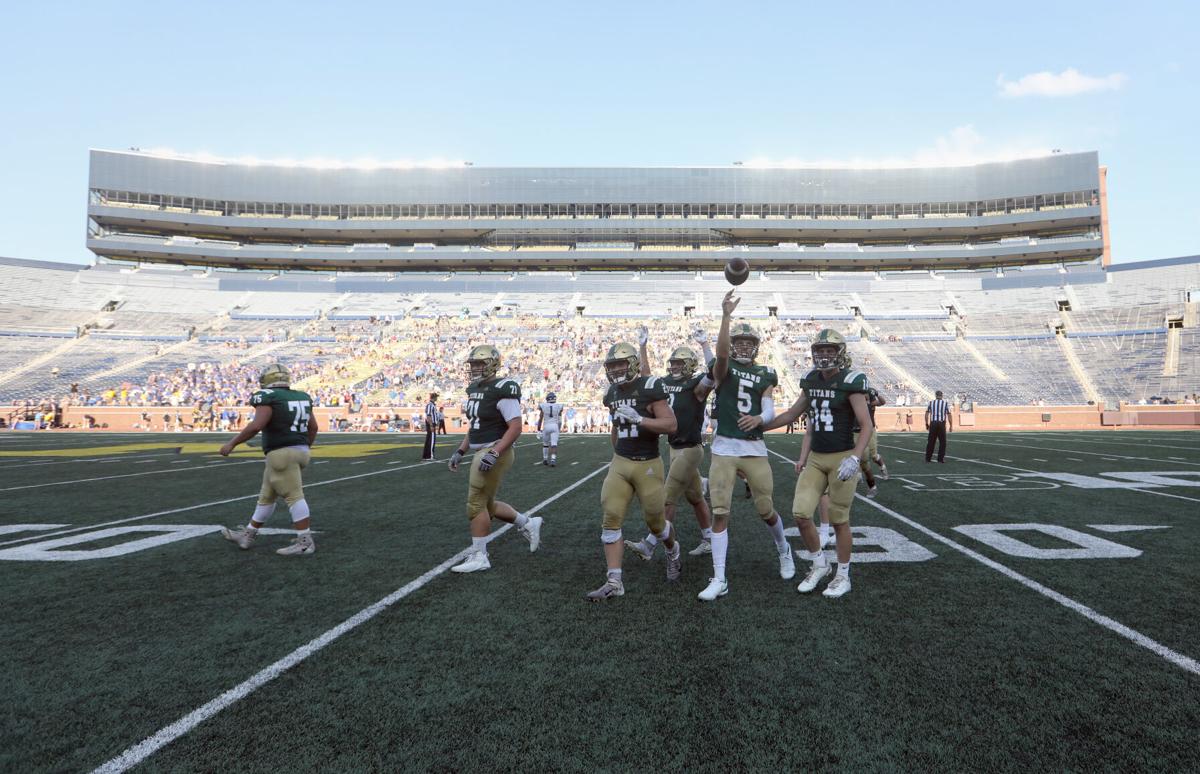 Traverse City West players celebrate as they leave the field at the end of Thursday's 35-28 win over Midland at Michigan Stadium in Ann Arbor.

Traverse City West players celebrate as they leave the field at the end of Thursday's 35-28 win over Midland at Michigan Stadium in Ann Arbor.

The Traverse City resident is a Michigan State fan, after all.

"It's great to be watching my son," Kevin Healy said just before kickoff. "I am a Spartan fan, though, so it is a little rough, but he gets to wear green here."

TC West stormed back to defeat Midland 35-28 after trailing 28-14 at halftime in Thursday's Battle at the Big House football games at the University of Michigan in Ann Arbor for the opening week of high school football in Michigan.

All it took was a play called "Michigan" and a defense that shut out the Chemics for the final 31 minutes.

"That is how we run Michigan!" Titans head coach Greg Vaughan shouted at the sideline after Michael Schermerhorn broke a 50-yard touchdown run to put West up 35-28 with 3:45 remaining in the game.

Michael Schermerhorn then intercepted a Midland pass intended for Sam Dauer — a player who wears the same No. 21 jersey — to all but seal the deal. Schermerhorn, who wore the team's gold-painted chain around his neck after the game, iced the game with a 13-yard run on West's next play that allowed the Titans to enter victory formation.

"You look up and it's bigger than you saw the time before," Schermerhorn said of Michigan's stadium that holds more than 105,000 spectators, and hosted three high school games Thursday. "It's just crazy."

West took an early 8-0 lead on Brandon Konchek's 69-yard quarterback keep to the left side. West ran a spread extra-point conversion play with three players split wide on each side. But they didn't motion back in like many teams do, and Konchek snapped the ball and easily scampered up the middle for the conversion with only two Midland defenders covering the middle.

"I mean people are telling me I'm not dual threat," Konchek said. "I'm trying to prove I am, I'm telling you."

Midland led 28-14 at halftime. Two of the Chemics' scores came after Titans mistakes. A high snap led to a run on a punt that didn't convert, setting up Midland for Jalen Brown's incredible catch after Will Gaston tipped the ball away, but Brown came up with the ball off the deflection while on the ground in the end zone.

Midland led 28-8 on a 21-yard screen pass touchdown to Jason Davenport with 7:33 left before halftime.

Konchek connected with Garett Shuler for a 22-yard touchdown with 4:13 before the half to cut Midland's lead to 28-14.

West drew within a score with 10:57 left on Konchek's 19-yard TD pass to Schermerhorn. Gaston hauled in a two-point conversion pass to make it 28-22 Chemics.

"Well coach called right block and I was supposed to go right, but I glanced my left and I see this green grass all the way," Gaston said. "I saw a couple blockers and I knew they could get done. They're looking at me so I was like, 'OK, just, just hit him and it worked out.' I had some great lockers up front, that's for sure."

Players for both teams kept cramping up and leaving the field as the heat index on the field soared into the 140s.

University of Michigan medical personnel on the sideline pointed a temperature gun at the artificial surface and it maxed out after 109.2 degrees, simply reading "hi."

"We just got just absolutely devastated by kids going down," said Midland head coach Eric Methner. "We just don't have that kind of depth. We got kids falling off, a lot of cramping and stuff."

Both teams kept water and Gatorade on hand for just such an occasions, but West also had jars of pickle juice in a cooler for cramping players. Players dotted both sidelines with tiny rubber pellets stuck all over sweaty arms and legs.

So many players cramped, Vaughan had to help Gaston stretch out during the second half because all the trainers and medical staff were already occupied.

Midland quarterback Drew Barrie, a Michigan Tech basketball commit, passed for 168 yards and two touchdowns. Konchek completed 8-of-15 throws for 67 yards and a touchdown, adding 113 rush yards on 12 carries. Schermerhorn outgained him by one two yards, amassing 115 on seven totes.

Gaston led the defense with eight tackles, while Matt Zoutendam and Ben Schollett each chipped in six. Aiden Lewandowski forced a fumble and Schollett recovered one.

TRAVERSE CITY — A lot of things were taken away from students and athletic communities throughout the COVID-19 pandemic, but many of them came out of it to upgraded facilities and plans for future changes.