This June 2020, file photo, shot from a television screen provided by the Michigan Department of Environment, Great Lakes, and Energy shows damage to an anchor support on the east leg of the Enbridge Line 5 pipeline within the Straits of Mackinac. 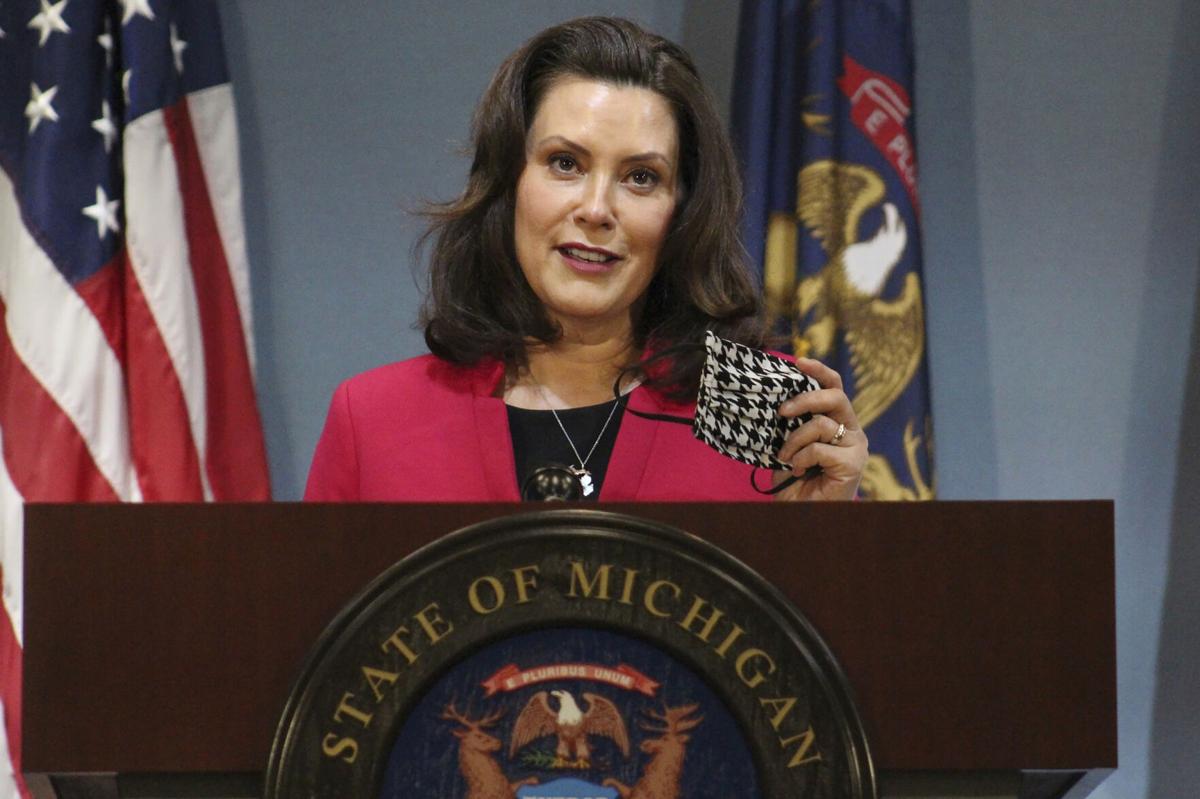 Michigan Gov. Gretchen Whitmer speaks in May during a news conference in Lansing.

This June 2020, file photo, shot from a television screen provided by the Michigan Department of Environment, Great Lakes, and Energy shows damage to an anchor support on the east leg of the Enbridge Line 5 pipeline within the Straits of Mackinac.

Michigan Gov. Gretchen Whitmer speaks in May during a news conference in Lansing.

TRAVERSE CITY — Both administrative and civil legal battles are underway over the underwater petrochemical pipelines that traverse Great Lakes bottomlands at the Straits of Mackinac.

The U.S. Army Corps of Engineers recently closed its second round of public comments on a permit application for a proposed underground tunnel to be build in the bedrock beneath the Straits. It’s what pipeline company Enbridge argues is a safe alternative to the current lines which remain exposed to 300-foot-deep Great Lakes waters.

A decision on the federal permit application remains pending.

Opponents argue the plan risks environmental devastation, while proponents contend not building the replacement tunnel may further damage Michigan’s economy which has already been rocked by the coronavirus.

Both perspectives were on display during the Corps’ public hearing Dec. 7 in which 140 people participated and 47 made official comments for the record. In addition, the federal regulatory agency received about 12,000 written comments by Dec. 11 with six days left until the comment period closed, said Bill Dowell, USACE public affairs officer.

“We’re still going through the comments and there’s really no time line at this point,” he said.

The Canadian pipeline company wants to drill a nearly 4-mile tunnel through bedrock under the Straits of Mackinac. It would house a replacement for twin pipes that have run along the bottom of the waterway connecting Lake Huron and Lake Michigan for 67 years.

The underwater segment is part of a line that carries crude oil and natural gas liquids used in propane between Superior, Wisconsin, and Sarnia, Ontario, passing through a long stretch of northern Michigan.

Environmental advocates not only question the tunnel plan, but also whether state regulators should allow such a large — expected at $500 million — investment in petrochemical energy infrastructure in such an ecologically vital place that’s owned by Michigan’s citizens.

“The dichotomy and the choice for Michigan is not tunnel or existing pipeline,” said Liz Kirkwood, executive director for Traverse City-based nonprofit For Love of Water.

“The choice is to ask what the energy future is for this region, this state, this nation and this planet. Line 5 is at the heart of that conversation,” she said. “This is where climate change impacts must be considered.”

Enbridge officials, however, argue their pipeline provides a key service to five states and two Canadian provinces. Yet, they said they welcomed the “wide-ranging public input” and “diversity of viewpoints” as the tunnel permit process proceeds.

They do intend to see the project through, though.

“Recent polling shows the majority of Michiganders support the Great Lakes tunnel project, and we are committed to building it,” said Ryan Duffy, Enbridge spokesman, in a written statement.

“Placing a pipeline in a new Great Lakes Tunnel will provide extra layers of safety and environmental protection and make what is currently a safe pipeline even safer, while creating Michigan jobs and securing the needed energy for consumers in Michigan and the region,” he said.

The company also needs a permit from the Michigan Department of Environment, Great Lakes and Energy, where an application is also pending.

Meanwhile, Enbridge filed a federal lawsuit to challenge Gov. Gretchen Whitmer’s recent demand that Line 5 be shut down. The argument is the state overstepped its bounds because the pipeline is under the sole regulatory jurisdiction of the U.S. Pipeline and Hazardous Materials Safety Administration.

In her Nov. 13 order to halt the flow of oil within 180 days, Whitmer said Enbridge had violated an easement granted 67 years ago to run a section of the pipeline along state-owned bottomland. Attorney General Dana Nessel sued in state court to enforce the governor’s requirement.

Among the governor’s top priorities is to protect and defend the Great Lakes which are vital to Michigan’s economy, her spokesperson said.

“The Great Lakes support over 1.3 million jobs that generate $82 billion in wages annually across the U.S., including 350,000 jobs in Michigan,” said Tiffany Brown, Whitmer’s press secretary. “We cannot risk the devastating economic, environmental, and public health impacts associated with a catastrophic oil spill in the Great Lakes.”

Enbridge filed its case in U.S. District Court in Grand Rapids, underscoring its contention that the pipeline is a federal matter. It also submitted a notice seeking to transfer the state’s suit to the federal court.

Vern Yu, the company’s president for liquids pipelines, said the state should “stop playing politics with the energy needs and anxieties of U.S. and Canadian consumers and businesses that depend on Line 5.”

There are no current court dates scheduled in the federal case.

Environmental reporter John Flesher of The Associated Press contributed to this article.