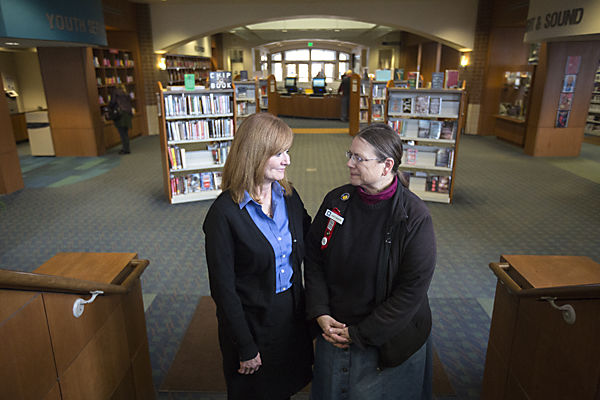 Gail Parsons, Traverse Area District Library director, left, and Katheryn Carrier, right, pose for a picture inside the Woodmere Branch Library, where they both work. Parsons and Carrier helped to save a man who had a heart attack in the library on January 18, 2018. Carrier has worked for the library for 31 years and Parsons for 10 years. "The not knowing was more the cause for anxiety," Carrier said, referencing how the two didn't know if the man was alive. 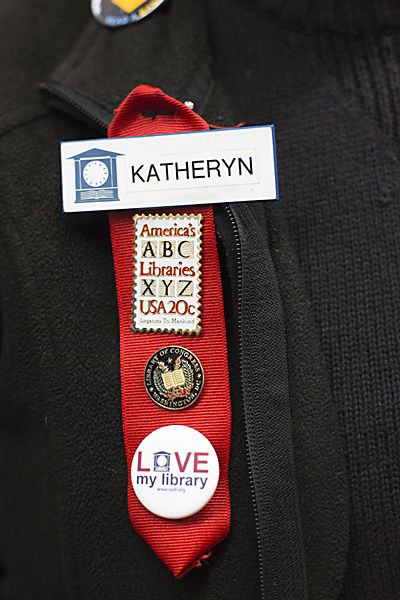 Katheryn Carrier has worked for the Woodmere Library for 31 years. 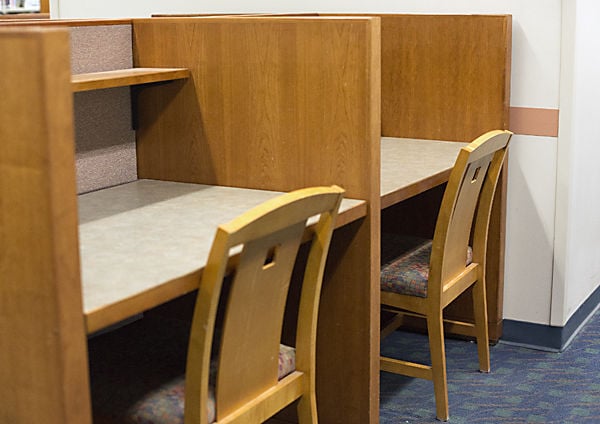 The man was working a desk in the Woodmere Library when he went into cardiac arrest. Katheryn Carrier works nearby and started trying to help him when Gail Parsons, the library director, came to assist.

Gail Parsons, Traverse Area District Library director, left, and Katheryn Carrier, right, pose for a picture inside the Woodmere Branch Library, where they both work. Parsons and Carrier helped to save a man who had a heart attack in the library on January 18, 2018. Carrier has worked for the library for 31 years and Parsons for 10 years. "The not knowing was more the cause for anxiety," Carrier said, referencing how the two didn't know if the man was alive.

Katheryn Carrier has worked for the Woodmere Library for 31 years.

The man was working a desk in the Woodmere Library when he went into cardiac arrest. Katheryn Carrier works nearby and started trying to help him when Gail Parsons, the library director, came to assist.

“It’s hard to fully express my gratitude — and the respect and admiration — I have for these ladies,” Yager said simply.

Like many afternoons, the 52-year-old was enjoying the quiet of the Traverse Area District Library. The homeless man visits the library regularly — to both stay out of the cold and do research.

But this sleepy Thursday was different. Yager was having a heart attack.

He fell from his chair onto the rough carpet and, for a moment, it seemed time among the towering shelves had stopped.

But Gail Parsons and Katheryn Carrier were moving.

“At first, we didn’t know what was going on,” said Parsons, the library’s director. “I looked at him and tried to find a sign he was breathing. He didn’t have a pulse.”

She didn’t panic. Staff called 911 and performed chest compressions. Carrier soon joined her, following instructions from the dispatcher on administering mouth-to-mouth on the now-unconscious Yager.

“I just thought, ‘I have to do something.’ It was automatic,” Parsons said. “Katheryn couldn’t do chest compressions and hold the phone.”

It was an agonizing wait for the ambulance, and paramedics quickly swept Yager away once they arrived. And then it was over. Parsons and Carrier weren’t even sure if Yager had survived.

So when the regular returned three weeks later, it brought the pair to tears.

“Katheryn was so excited,” Parsons said. “The thought that something she had done had helped him survive was very emotional for her — and for me. He looked great. We were so afraid he’d passed away.”

Carrier was quick to offer an embrace to the man.

“I’m just thrilled he made it — I try not to think about if he hadn’t,” she said. “God answered my prayers.”

Parsons' coworker brought her hurrying from her office. Conflicting rumors about Yager’s fate during his three-week absence had left her fearing the worst.

“He gave me a hug, thanked me for helping save his life,” Parsons said. “He said he felt like he’d been saved for a reason.”

Yager, who usually splits his time between the library and Michigan Works!, was glad to see them, too.

But he has struggled with that reason since, he said. Living in his truck and nearly out of gas, he faced difficulties getting work through his temp agency after three income-less weeks in the hospital.

“I’m bipolar. I get depressed and sometimes think maybe I would’ve been better off if they hadn’t resuscitated me,” Yager said. “I’ve lived a full and active life.”

The care Parsons and Carrier showed him, though, has been a silver lining.

“It means everything in the world to me,” Yager said. “And it’s not just their care for individuals and the well-being of the people who come here. It’s the attitude of the librarians — how they always try to be helpful in every aspect.

“They’re involved in so many different programs and they get so much good going in this community.”

The incident left its mark on the librarians, too. Parsons said the library is working on organizing a CPR training session for staff so, in future emergencies, everyone is prepared.

Yager, who has been CPR-certified since he was 18, is happy to hear it.

“I think CPR is something that should be taught in high school health classes, and all matters of first aid,” he said. “That know-how could help someone in a medical emergency.”

About 350,000 out-of-hospital cardiac arrests happen each year, according to the American Heart Association, and almost 90 percent are fatal. CPR — especially when performed within the first moments of a heart attack — can double or even triple a person’s chances of surviving.

“Some people are afraid to do that because they think they’ll get in trouble, be held liable in some way,” Parsons said. “But when someone’s life is on the line, that all goes out the window.”

Editor's note: This story was updated 03/05/2018 to reflect several changes made in the print editon and to correct that staff called 911.

A Singer is Saved

TRAVERSE CITY — Last month, Dan Morton was fulfilling his role as baritone during a rehearsal of the Grand Traverse Choir at the Dennos Museum Center  when he started feeling dizzy.

A few medical professionals in the crowd took notice.

“I noticed there was a gentleman swaying in the choir. Then, he fell to the floor,” said Mark Hiller, a respiratory therapist at Munson Medical Center and one of three bystanders who jumped in to help 77-year-old Morton.

“We heard a big thump,” added Larry Winegar, a retired head and neck specialist and longtime friend of Morton’s.

He was quick to assist.

“I flipped him onto his back and checked his vitals — he didn’t have a pulse,” Hiller said.

The four minutes until emergency services arrived felt like hours.

But by the time paramedics arrived — flanked by firefighters and police officers — Morton was conscious and stable.

“It was just so great that we had a group of people who knew what to do,” Winegar said. “We didn’t have any equipment — we had out brains and our hands.”

After a pacemaker and a few days of rest, Morton should fully recover, he added. Doctors are also treating a neck injury Morton sustained during the fall.

“It’s funny, we see this stuff frequently at the hospital, but when you see it in the outside world, it’s different,” Hiller said. “ It’s just really good when it works out the way it did.”

And like Yager’s case, the incident was a reminder of the importance of CPR training, Hiller said.

“When you don’t expect it — that’s when surprises can happen,” he said. “If (we weren’t) there, the night could’ve had a different outcome.”

Editor's note: This story has been updated to correct a reporter's error. Gail Parsons was called in from her office, not from a day off, when Ken Yager returned to the library after receiving medical treatment. — March 5, 2018