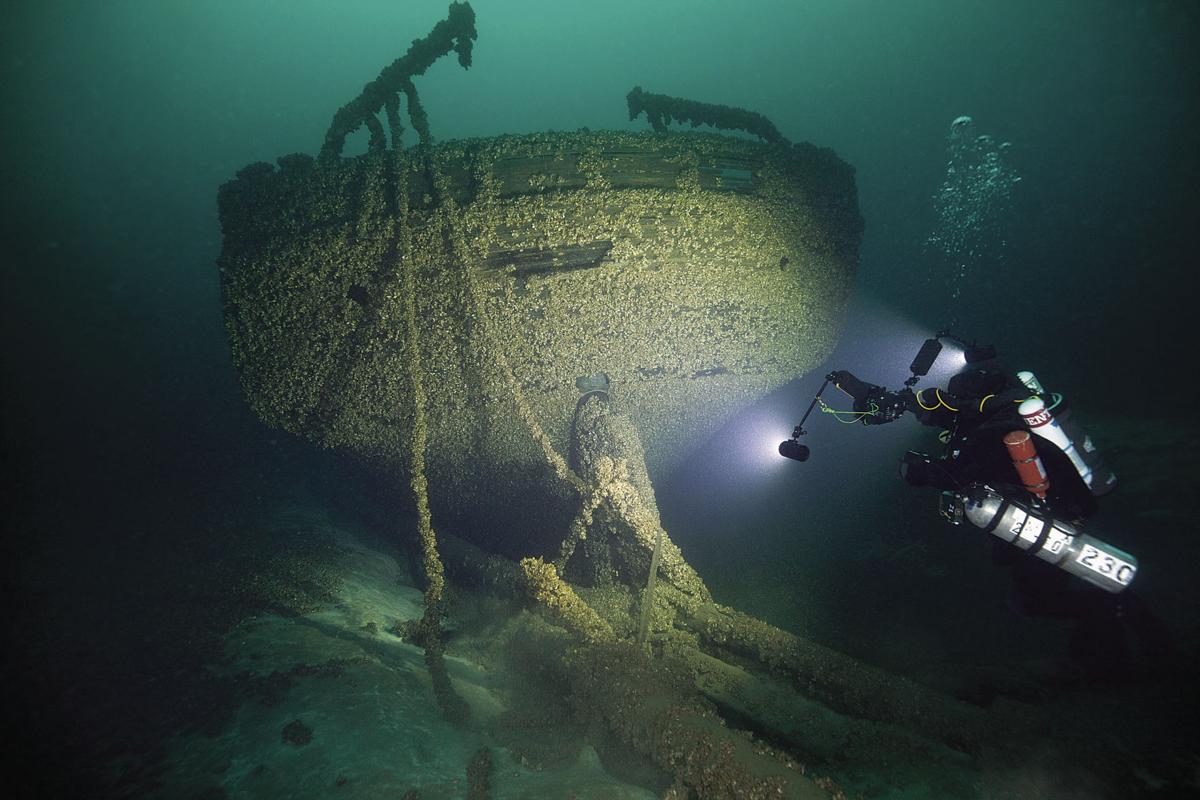 Diver John Scoles checks out the hull of the Peshtigo, which, along with the St. Andrew, was recently found near Beaver Island. The ships collided and sank in 1878. 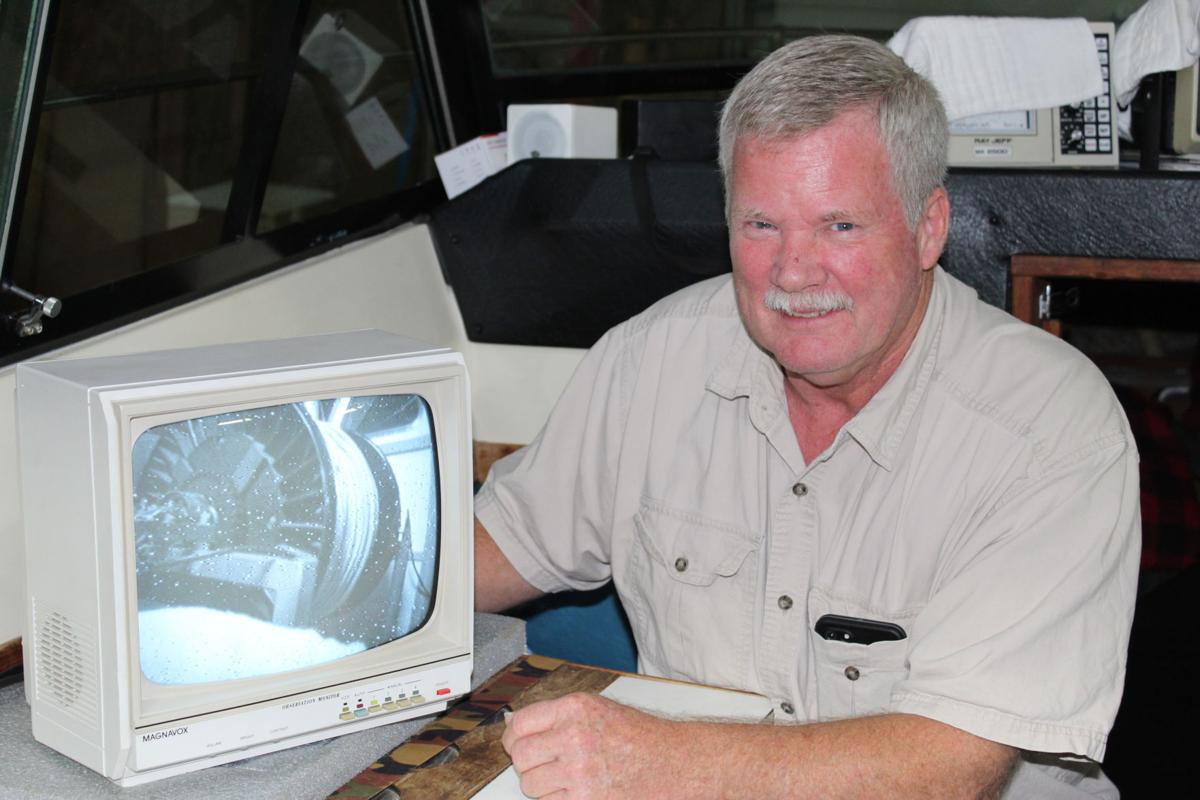 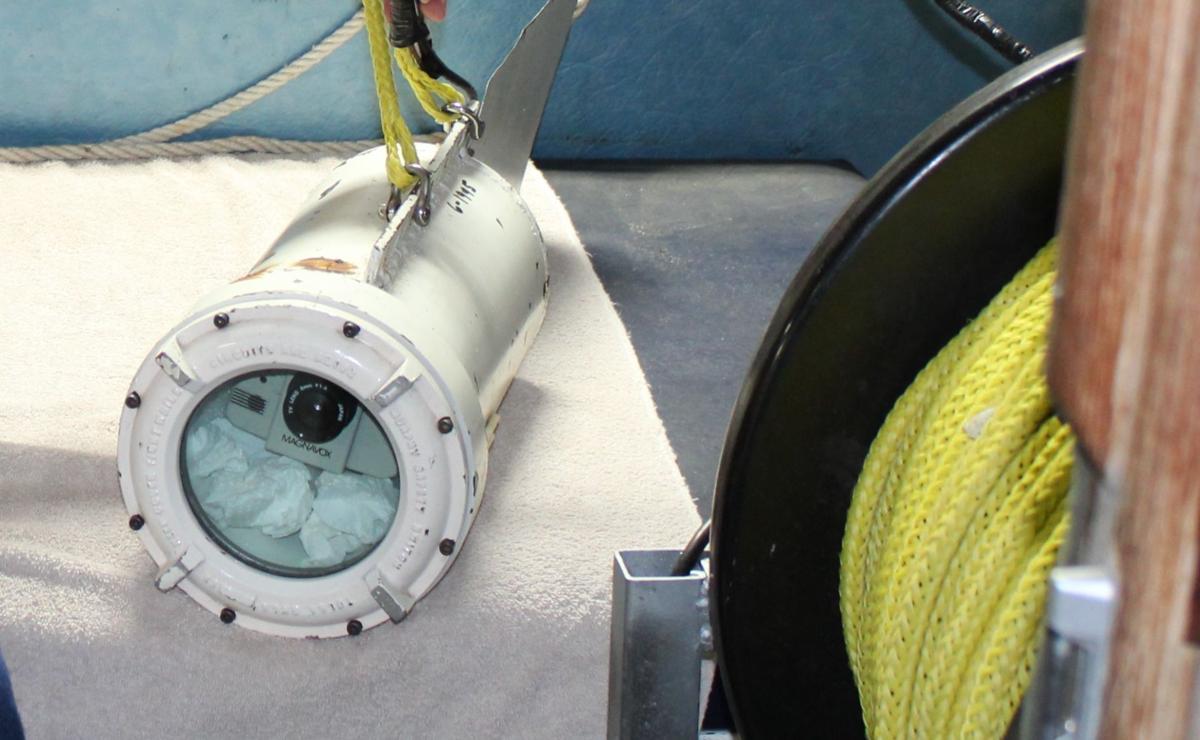 An out-of-date camera system built by Bernie Hellstrom was lowered into Lake Michigan to get a first look at the 1878 shipwreck he discovered.

Diver John Scoles checks out the hull of the Peshtigo, which, along with the St. Andrew, was recently found near Beaver Island. The ships collided and sank in 1878.

An out-of-date camera system built by Bernie Hellstrom was lowered into Lake Michigan to get a first look at the 1878 shipwreck he discovered.

BOYNE CITY — Bernie Hellstrom’s boat is a 24-foot, 1975 Sea Ray loaded with an analog mapping system and a drop camera he built himself in the 1990s.

The boat and its obsolete shipwreck-hunting equipment are as weathered as their owner, who has spent a lifetime in and on the water.

Hellstrom’s low-tech toys can’t compete with today’s highly-specialized equipment, but they got the job done when they were used to discover two schooners on the bottom of Lake Michigan that collided and sank in 1878 — nearly 150 years ago.

Some news stories of the day had the St. Andrew and Peshtigo sinking in Lake Huron, so years ago when a ship was found about 5 miles off the coast of Cheboygan it was identified as the St. Andrew.

The Peshtigo should have been nearby, Hellstrom said, as the two vessels struck and sank in less than 10 minutes, according to a report in the Chicago Tribune. Even so, she was never found.

Hellstrom’s discovery changes history by putting the collision southeast of Beaver Island — about 50 miles from where it was originally thought to have taken place.

“So what is the boat in Cheboygan?” Hellstrom said. “We don’t know. We just created a new mystery from this.”

Hunting for sunken ships and other Great Lakes flotsam and jetsam is Hellstrom’s hobby. It keeps him plenty busy, as estimates put the number of shipwrecks there at more than 6,000.

“I’m pretty much exploring the Great Lakes because you never know what’s down there,” Hellstrom said. “There’s a little bit of everything on the bottom of the Great Lakes.”

Steel rails, locomotives and train cars that fell off barges have been found. Hellstrom has seen cars, shopping carts, fishing shanties and even a sewing machine. There are also sinkholes, waterfalls and tree trunks more than a dozen feet in diameter, he said.

Hellstrom sees beauty in the lake bottom, likening it to looking at the fall colors.

“If I could live underwater I would stay there,” he said. “These ships are art. They’re beautiful.”

But there are also hundreds and hundreds of hours of looking at nothing, he said.

As a boy “The Undersea World of Jacques Cousteau” was Hellstrom’s favorite show and a book about the sinking of the Carl D. Bradley, a Great Lakes freighter that went down in 1958, set off his fascination with shipwrecks.

“I was scuba diving before I was driving,” Hellstrom said. “I had to bum rides to all the dive sites.”

In 1995 he “relocated” the Bradley using GPS coordinates that were not available when it sank.

Ross Richardson, of Lake Ann, is also a shipwreck hunter who has been looking for the pair of schooners, saying he suspected the vessel found off Cheboygan was not the St. Andrew. He sees Hellstrom’s find as both significant and a double bonus.

“Not only is it the only wreck where two ships are lying next to each other, it recreates history,” Richardson said. “I’m a little jealous he found it.”

Richardson has no doubt the ships are the Peshtigo and St. Andrew because the size, location and details given by crew members in old news accounts match up 100 percent.

The Peshtigo, a 161-foot-long schooner, was hauling coal to Chicago. The St. Andrews, a two-masted schooner 143 feet in length, was carrying corn from Chicago to Buffalo.

They collided at 1 a.m. after a confusion in signal torches between the passing vessels. Two men were lost, with the rest of the crews picked up by the schooner SVR Watson.

Hellstrom first saw the 1878 shipwreck as a bump on his bottom sounder — which is always on — in 2010 while boating to Squaw Island north of Beaver Island. He put a mark on the map and checked it again on his way back.

He did that for several years, crisscrossing the spot and marking the bumps, eventually realizing it was 400 feet of something. It was thought that there were no shipwrecks in that area so he wrote it off as an abandoned fishing net.

The object was 200 feet down and Hellstrom does not have the equipment or training to dive any deeper than 130 feet.

“It’s too deep to dive so it goes on my ‘later’ list,” Hellstrom said. “Now I wish I would have looked closer.”

Last year, having retired and taken advantage of calm days on the lake, he used his 1980s analog equipment that bounces sound off the object to create a paper graph image. Side scan sonar would have found the ship right away, but that’s an expensive piece of equipment Hellstrom does not have.

The graph gave him a decent profile of a ship’s hull. In June he dropped his camera in the lake, using a winch and system of wires and rope to get it to what he now knew was a ship.

“I could not believe what I was seeing on the monitor down there,” Hellstrom said.

He went back out a couple of times, not yet knowing he had found two ships.

“Then I found a stern, but not the same stern,” he said. “It got real exciting.”

He also saw a big pile of wreckage, which turned out to be the bow of the Peshtigo. The two Civil War-era ships lay just 10 feet apart, with a huge gash in one of the hulls showing that the vessels had collided.

Hellstrom contacted marine historian Brendon Baillod, who after some research was convinced the two ships were the Peshtigo and St. Andrew.

There are no historical photos of the ships, so cargo, mast count and dimensions of the ship are used to identify it. Baillod also took another look at news accounts of the disaster, finding that many placed the collision between Beaver Island and Charlevoix, very near Hellstrom’s discovery.

Technical divers John Janzen and John Scoles were recruited to film the find and confirmed it was the two schooners.

The ships are protected by law as part of the Michigan underwater preserve system created in 1980 that makes it a felony to remove or disturb artifacts in the Great Lakes. Hellstrom’s find will be documented and placed in the state archives.

Richardson in 2010 discovered the Westmoreland shipwreck, which is located in the Manitou Passage Underwater Preserve. He’s found a dozen shallow water wrecks and is getting ready to announce another discovery, but is keeping mum for now.

Technology such as side scan sonar, mapping software and the internet that makes it easy to do research and share information have quickened the pace at which wrecks are found, he said.

“This is the golden age of shipwreck hunting,” Richardson said. “I think we’ve got another 10 years and every shipwreck will be found. It marks the end of an era.”

Hellstrom will be credited with the discovery of the St. Andrew and Peshtigo, but is now moving on to other watery finds, whatever they may be.

“It’s the thrill of the find,” he said. “Now I leave it up to the historians to sort it out and I go look for another shipwreck.”