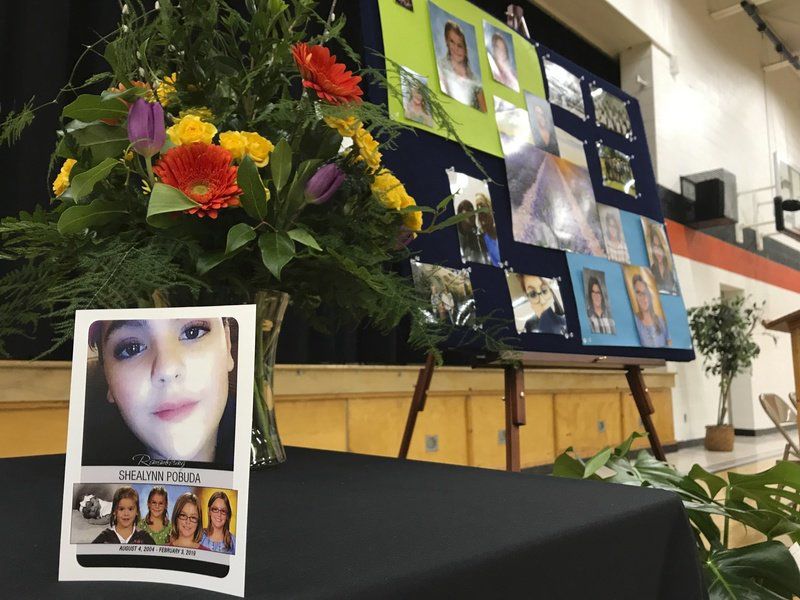 A memorial for Shealynn Pobuda was set up in the Kingsley Middle School gymnasium during a service honoring her life Saturday. Pobuda as well as fellow Kingsley Area Schools students DeAnte Bland and Kayden Stone have all killed themselves in the last eight months. Pobuda died Feb. 3. 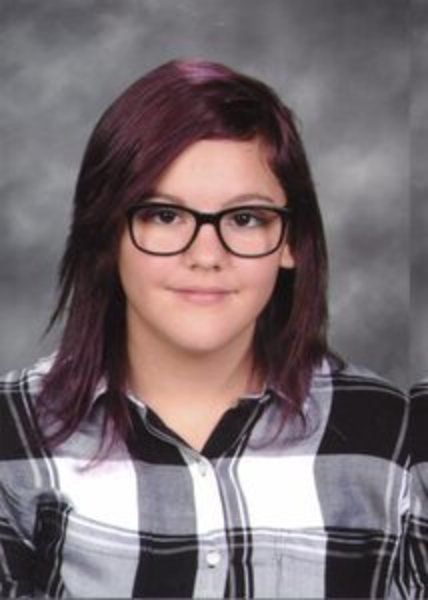 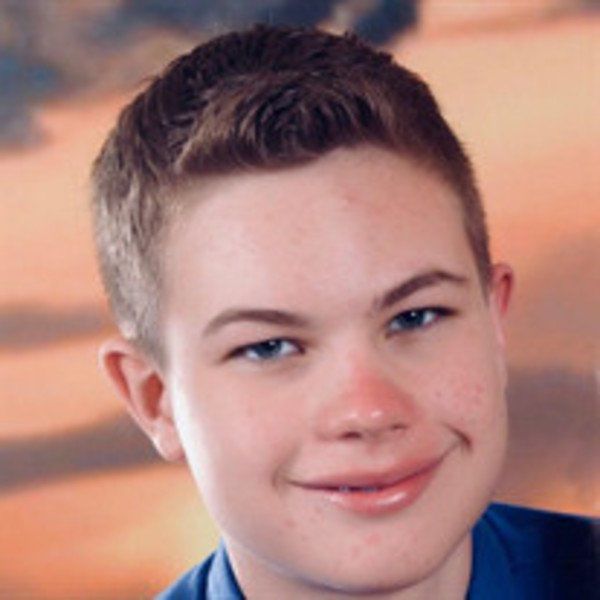 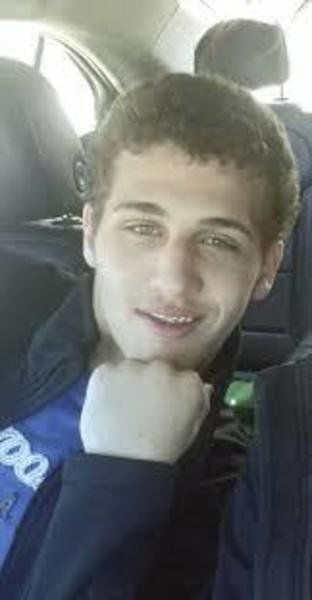 A memorial for Shealynn Pobuda was set up in the Kingsley Middle School gymnasium during a service honoring her life Saturday. Pobuda as well as fellow Kingsley Area Schools students DeAnte Bland and Kayden Stone have all killed themselves in the last eight months. Pobuda died Feb. 3.

He was a day away from starting high school.

Kingsley, a town of less than 1,700 people, has been shaken to its core three times in the last eight months after DeAnte, Kayden and Shealynn each took their own lives — leaving behind mothers and fathers, brothers and sisters, family and friends drowning in grief.

Hundreds came together Saturday morning in a time of unbearable sadness to honor Shealynn during a memorial service at the Kingsley Middle School gymnasium. The ripples of that young girl’s suicide created waves of sorrow that have worn down an already devastated community.

Who would DeAnte be when he was 30?

What would Kayden name his children?

Where would Shealynn go to college?

Why did they do this?

Answers are being sought, but they likely won’t be found. No answer will bring any solace to soothe the suffering.

The suicide rate for children and teens between 10 and 17 years old increased 70 percent between 2006 and 2016, according to data from the Centers for Disease Control and Prevention. The same study shows that Michigan has seen a 33 percent increase overall in suicides since 1999, which is 8 percent higher than the rate nationwide.

For the last 160 days, Bill Stone has lived his life without his son — his smart, talented, thoughtful and driven son.

“You don’t know how much you love your kid — you think you do, but you don’t — until you don’t have them anymore,” Stone said.

Not a day has passed when he hasn’t obsessed over if he could have done something to prevent Kayden from ending his life.

“You question yourself. What are we missing? What are we not doing right?” Stone said. “For me and for my wife, we look back on it and we obviously think about where we missed an opportunity to intervene.”

Stone wonders if he missed his son’s cry for help.

“At the time, you don’t notice these things. But hindsight, you say, ‘Oh, there was this time, and maybe it meant something. Maybe this little comment, maybe that was something,’” he said. “For us, if we could do it all over again, we would look into and question everything.”

Many of those who gathered Saturday in Kingsley to remember Shealynn had come together months ago to do the same for DeAnte and Kayden. The small and tight-knit family of Kingsley Stags are at a loss, but they have leaned on each other and fought to get back up after getting knocked down once again.

“You know how bad they’re hurting, and it doesn’t go away,” he said. “I would love to be able to tell somebody, ‘Oh, it’s going to get better.’ It doesn’t. It just doesn’t.”

Stone and his wife Melissa attended the memorial service Saturday, as did DeAnte’s sister, Bianca, and others from his family. The silence in the gym could not fully express the inner turmoil of those either sobbing, or simply in stunned silence, staring blankly ahead.

“That wound is always open,” Stone said. “That’s not something that goes away.”

Numb is the best word to describe the Kingsley staff and student body this past week.

Lauri Bach has been a teacher at Kingsley Middle School for more than 20 years. She watched Kayden and Shealynn grow right before her very eyes each time they walked into her social studies classroom.

“You live with these kids, practically, for a year,” Bach said. “You see them day in and day out. You get a sense of who they are and what’s going on their life. And then to know it’s gone, it’s really tough.”

Bach said the last year has brought a pain that is unimaginable.

Staying strong for her students has been a challenge. Bach said seeing their faces every day as they try to come to grips with what has happened “just rips your heart out.” Unfortunately, Bach doesn’t have the answer to why this happened.

“They are searching. They are questioning. They are wanting to know. They are trying to figure things out,” Bach said. “But none of this is making sense to them, and we’re not equipped to give them an answer because we don’t know.”

Bach’s only saving grace, she said, has been her fellow teachers.

“We have each other to comfort and be there and listen and vent and support,” she said. “I’m so thankful for that.”

Grief counselors and psychologists have been on site throughout the week to help students and staff members as they try to cope with this tragedy. Kingsley Superintendent Keith Smith said officials from Michael’s Place and Third Level have been brought in, as well as people from the Traverse Bay Area Intermediate School District’s crisis response team.

“The death of any student takes a big toll on the school, and the passing of any child greatly affects the whole community,” Smith said. “When we had the first one coming out of school, that certainly shocked us. Before we got back in school, we had the second one, and that really put us back on our heels. Then we had this one. Each one is unbelievable in and of itself.”

Kingsley has held assemblies, brought in speakers and uses the PREPaRE curriculum to help educate the students and staff about the warning signs of suicide. Smith, however, said it clearly has not been enough.

“Despite what we’ve done, it’s not enough if a kid still feels that’s the solution,” he said. “That terrifies me. It’s very scary, because despite everything you do, those kids thought this was the answer. We’ve got to get these kids extra help.”

Smith said the school has had a large number of students reach out for help after Shealynn’s suicide.

Marv Nordeen is a school psychologist with TBAISD and has worked with the Kingsley community for 25 years. He believes the three suicides in Kingsley are coincidental and not the result of anything anyone did or did not do.

“Even though it feels like it’s Kingsley right now, this is happening and has happened in other places,” Nordeen said. “It’s just that in this moment, it’s happening in Kingsley.”

Nordeen estimates that 40 to 60 percent of every school district’s student body has had some suicidal thoughts at one point or another. He said people resort to suicide when feelings of hopelessness and helplessness become so overwhelming that they cannot see beyond that despair.

Those thoughts made their way into Bill Stone’s head after Kayden’s death.

Stone said he got to a point where he didn’t think he could keep going. He understands now why suicide rates of those who have lost a loved one — either to suicide or some other way — are so high. A 2016 study from the Department of Health and Human Services showed that people have a 65 percent greater risk of attempting suicide after tragically losing a family member or friend.

“There were times when I definitely would have been OK if something happened to me to take me,” Stone said. “Everybody that loses a child that I have spoken with, that’s crossed their mind.”

Stone said it is amazing how the act of suicide, which causes all that pain, can also be the very action that takes it away.

“When you’re in this type of pain, there is nothing off limits to remove it. The pain is so unimaginable. You just want to be out of it,” Stone said. “But I have a mother. I have a daughter. I have a wife. I have a brother. I have sisters. I can’t do that to them, because I know the pain I am in and how cowardly it would be of me to end it so I could end my pain but then leave everybody else with theirs.”

Stone turned to his faith and God to pull him back up. His wife and his daughter, Auryona, who was Shealynn’s classmate, are the reasons he fights through the pain. His mission has become turning this tragedy into something positive and to use it to better himself, his family and those around him.

“If there is a parent out there who thinks they’re exempt from this, they’re naive and maybe a little ignorant — because it could be their kid tomorrow,” he said. “My kid was one of the most unlikely candidates you could ever think of, yet here I am.”

If you or anyone you know are having suicidal thoughts, call the National Suicide Prevention Lifeline at 1-800-273-TALK (8255). It is a free, 24/7 confidential service that can provide people in suicidal crisis or emotional distress, or those around them, with support, information and local resources. You can also text the Crisis Text line at 741-741. This free text-message service provides 24/7 support to those in crisis. Text 741-741 to connect with a trained crisis counselor right away.

A free, 24/7 confidential service that can provide people in suicidal crisis or emotional distress, or those around them, with support, information and local resources.

This free text-message service provides 24/7 support to those in crisis. Text 741-741 to connect with a trained crisis counselor right away.

— Talking about wanting to die

— Looking for a way to kill oneself

— Talking about feeling hopeless or having no purpose

— Talking about feeling trapped or in unbearable pain

— Talking about being a burden to others

— Increasing use of alcohol or drugs

— Sleeping too little or too much

— Do not leave the person alone

— Remove any firearms, alcohol, drugs or sharp objects that could be used in a suicide attempt

Editorial: Hope, help and our role in suicide prevention

We were all children once. Many of us, if we reach back into our truest memories, can rememb…

TRAVERSE CITY — June 13 was a brutal day for Nicole Kitchen.