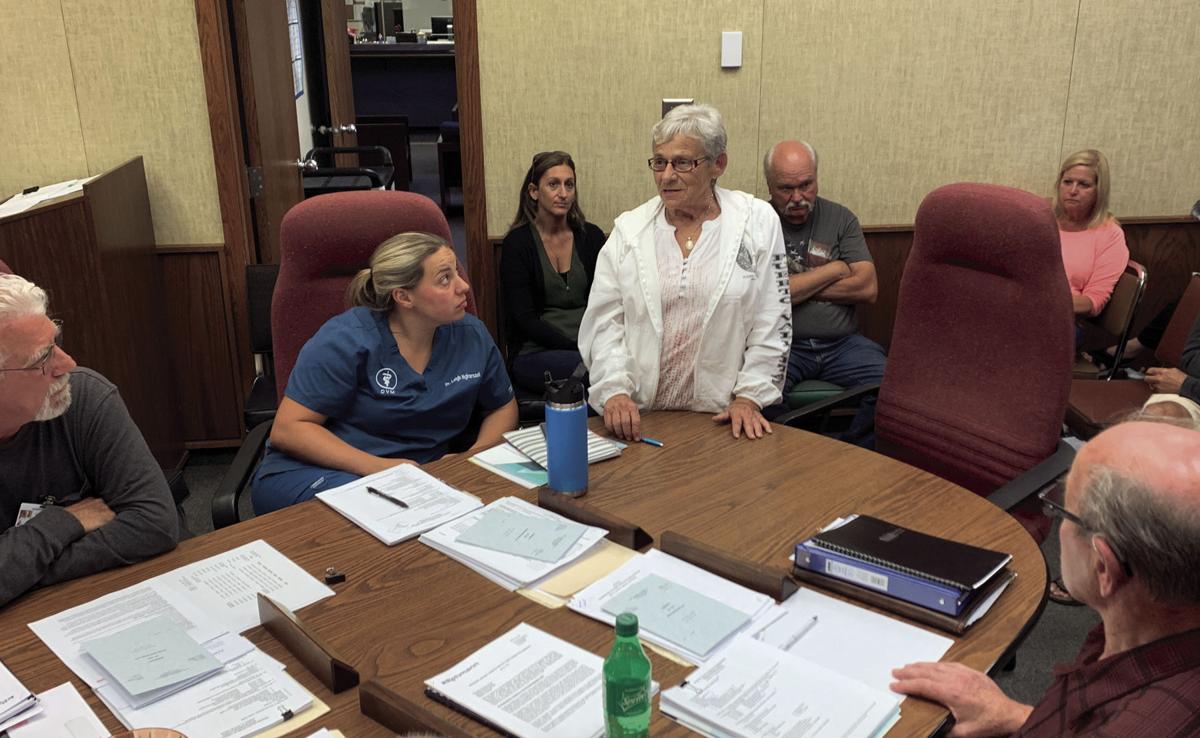 Local realtor Sue Vowels (center) speaks during Wednesday's five-hour Kalkaska County Board meeting. She described the point-of-sale septic and water well inspection program as having "nothing in it to make it worth having." 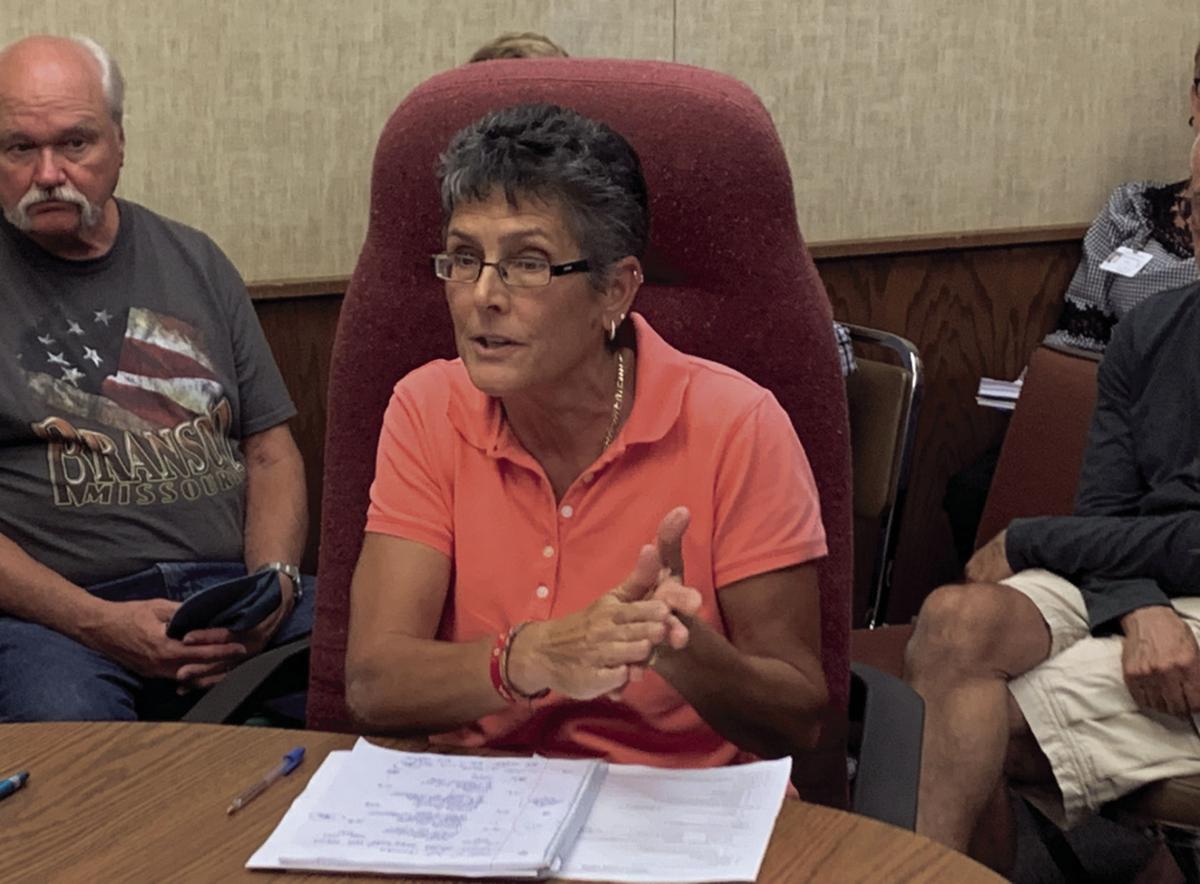 Lynnette Cervone, a trustee from Coldsprings Township in Kalkaska County, said the township board favors keeping the point-of-sale inspection rule to maintain cohesiveness among regulations countywide. She spoke during Wednesday’s five-hour County Board meeting.

Local realtor Sue Vowels (center) speaks during Wednesday's five-hour Kalkaska County Board meeting. She described the point-of-sale septic and water well inspection program as having "nothing in it to make it worth having."

Lynnette Cervone, a trustee from Coldsprings Township in Kalkaska County, said the township board favors keeping the point-of-sale inspection rule to maintain cohesiveness among regulations countywide. She spoke during Wednesday’s five-hour County Board meeting.

KALKASKA — Commissioners for Kalkaska and Manistee counties are in a standoff over the future of a septic inspection program.

In Kalkaska County, commissioners are in the midst of deciding whether to follow through with last year’s plan to withdraw from a point-of-sale inspection program for septic systems and water wells, currently operated through the district health department.

In Manistee County, commissioners are trying to strengthen the same inspection program by removing several exemptions, plus make it more workable for property sellers by extending from 2 to 3 years how long inspections remain valid.

Neither board has voted to let the other have its way despite the opportunity. It’s a stalemate.

“It is what it is. I’m not going to throw stones at Kalkaska County,” said Jeff Dontz, chairman of the Manistee County board.

Meanwhile, large numbers of Kalkaska County residents time and again descend on board meetings there to discuss the issue — a scene repeated Wednesday night when 30 people crammed into the board’s meeting room.

Proponents of the program argue it provides consumer protections, safe drinking water assurances and environmental conservation. Those critical of the point-of-sale inspection rule contend the policy creates a backlog of land transactions awaiting inspection reports, plus doesn’t achieve its intended goal because of abundant exemptions and lack of enforceable standards for faulty septic systems that have not yet completely failed.

Several public speakers during Wednesday’s meeting in Kalkaska suggested a compromise — the program could be amended to both protect the environment and address criticisms.

“It needs to be modified more, maybe have enforcement put into it,” added Charles Zinner, county resident.

Local realtors Sean Riley and Laura Grezner said the up-front cost of these inspections is problematic for some property sellers, and they would like to see the program’s paperwork process streamlined. There’s a better way to do this, they agreed.

“I would love to sit down with people and figure out how to get this done,” Grezner said.

Kalkaska County commissioners have juggled the issue for nearly a year, spending upwards of two dozen hours discussing the matter during public meetings without making a decision. The officials also have failed to establish a long-discussed ad-hoc committee to further explore the issue.

Kohn Fisher, board chairman, said there is no money in Kalkaska County’s budget to pay for another ad-hoc committee.

He said county rules are to provide a stipend for each meeting for all subcommittee members because they are providing a public service. The board already OK’d such a group to take on concerns at the Kaliseum sports facility, though it has not been finalized for months.

Fisher said he would investigate whether an ad-hoc committee could be established in a volunteer capacity to work on a solution for the controversial inspection program.

Also during the meeting, Kevin Hughes, health officer for District Health Department No. 10, answered questions from Kalkaska County commissioners about what it would take to break away from the 10-county district department if they don’t get their way on the point-of-sale inspection program withdrawal. He said a conflict resolution process is meant to avoid that.

If that doesn’t work, it would require a minimum 2 years notice and the county would need to fund at least $611,000 in salaries for basic, statute-required services. That would not include money for popular services such as breast and cervical cancer screenings, the federal Women Infants and Children program and others, Hughes said.

Other options discussed would be for Kalkaska County to join another district department or even attempt to partner with Grand Traverse County, which has its own standalone health department.

Some in the crowd at Wednesday’s five-hour meeting grew exasperated with the lack of action.

“We’re sick and tired of coming here and sitting here listening to you not be able to punch your way out of a paper bag,” said Carol Phillips, a county resident who has long advocated in favor of the inspection program.

Phillips said if commissioners were going to back out of the program for their “real estate cronies,” they should go ahead and do it and stop delaying.

Kalkaska County commissioners are scheduled to gather for a special meeting Monday to discuss other county matters. However, Fisher said anytime the full board meets they can bring up and vote on the point-of-sale inspection program.