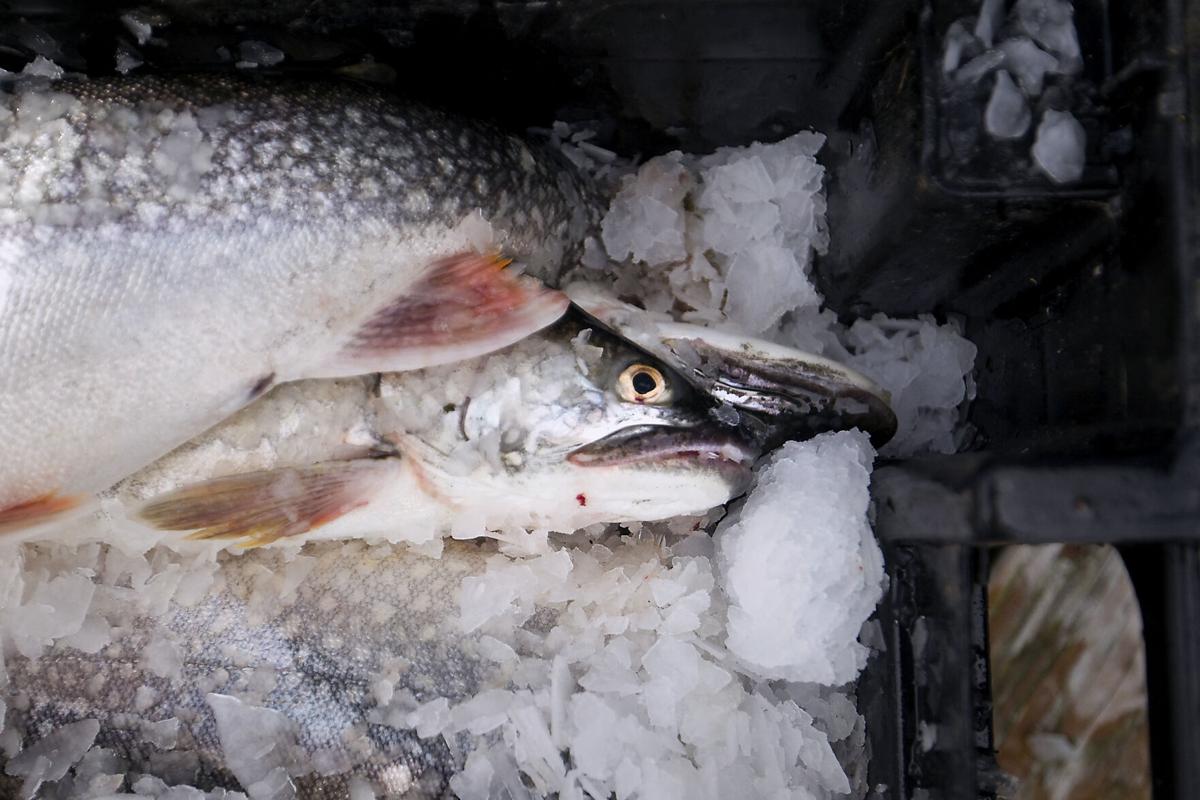 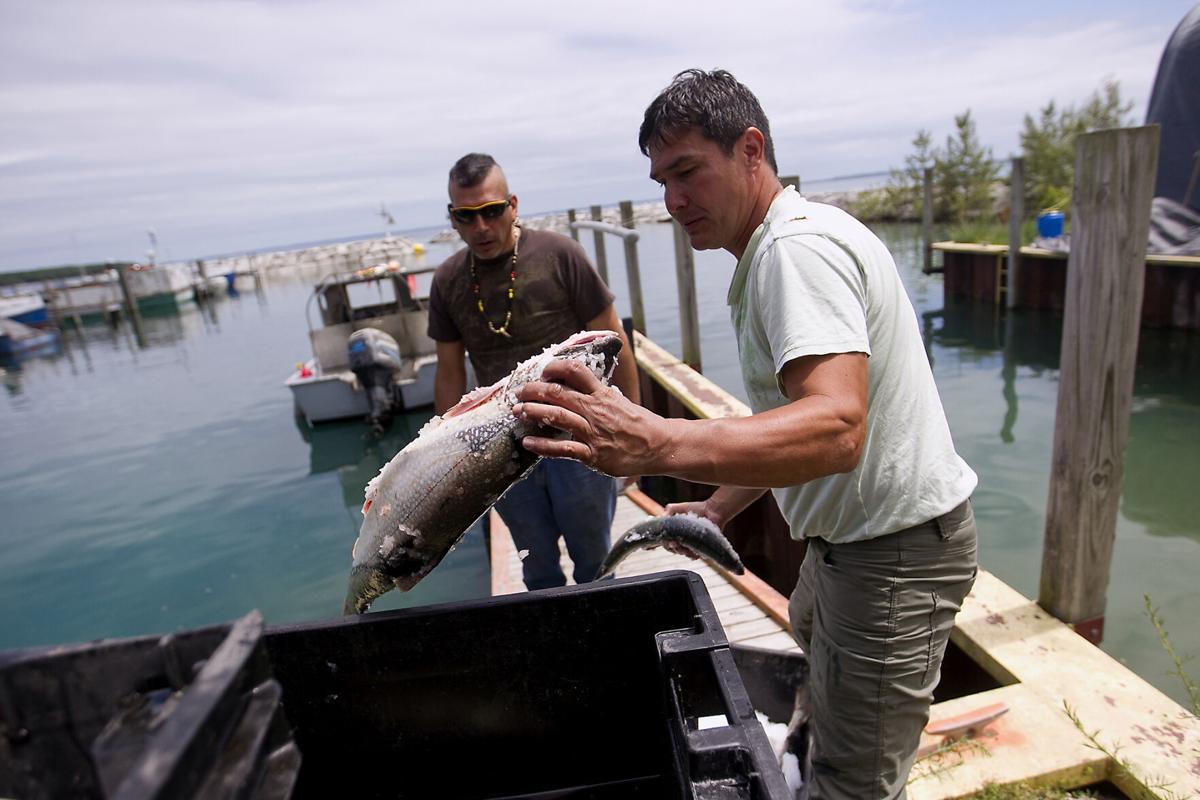 Larry Koon, left, and Brian Napont load a morning's catch into a truck at Arthur Duhamel Marina in Peshawbestown on June 14, 2016. 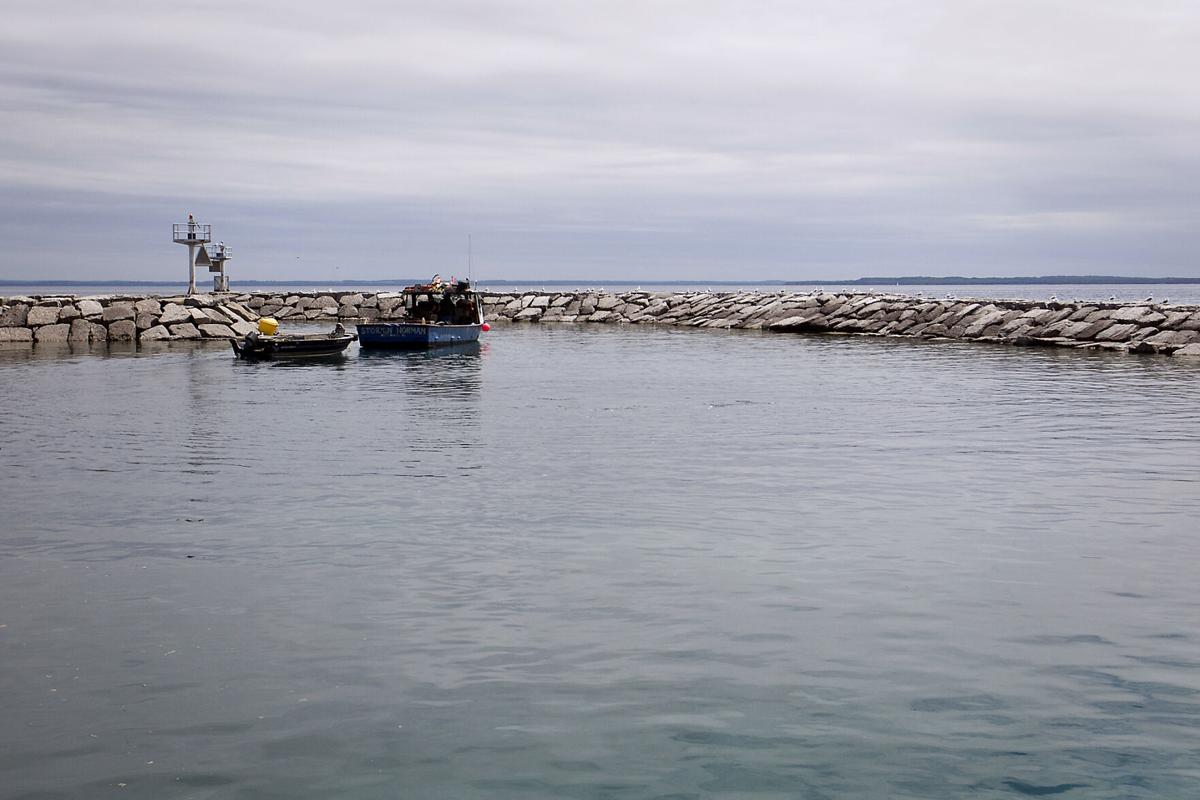 A fishing boat heads out onto Grand Traverse Bay from Arthur Duhamel Marina in Peshawbestown on June 14, 2016. 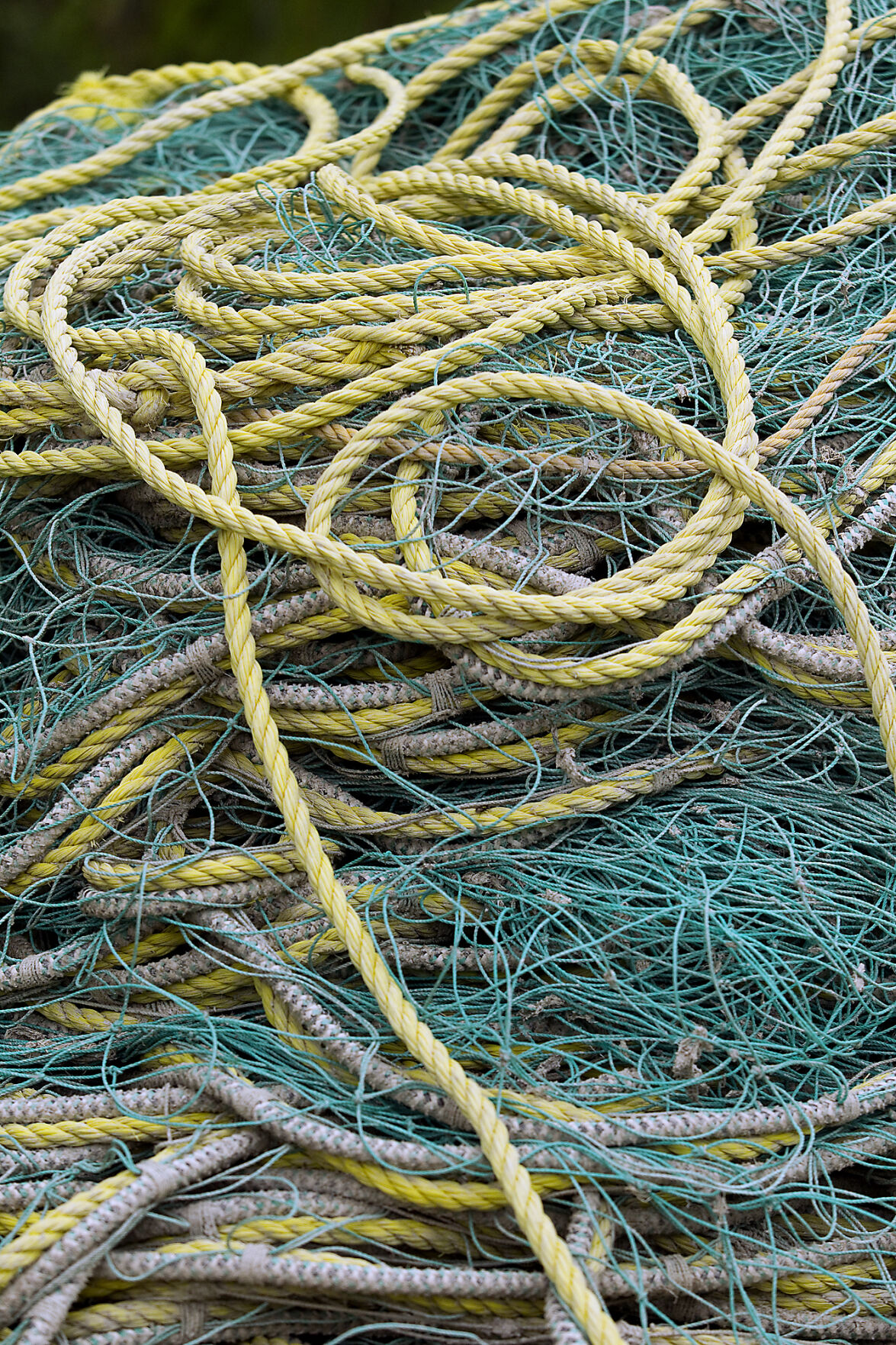 Fishing nets sit in a pile in Arthur Duhamel Marina in Peshawbestown on June 14, 2016.

TRAVERSE CITY — The state of Michigan and five Ottawa and Chippewa tribes have more time to renegotiate their expiring agreement governing fishing in the Great Lakes.

The decades-old agreement, set to be renegotiated this summer, now will be extended through the end of 2020 to give the parties more time to strike a deal.

The extension stemmed from a series of court motions filed in June and July, which also revealed details about one tribe’s position in the negotiations. Powerful conservation interests were quick to criticize it in a way that tribal officials say is wrong, offensive, and little more than fear-mongering.

The 2000 Consent Decree, set to expire Aug. 8, is a co-management framework for the 1836 Treaty Waters of the Great Lakes. That includes areas of Lakes Michigan, Huron and Superior where tribal signatories of the Treaty of Washington and their successors (the five federally recognized tribes in the area) reserve the right to fish. State-licensed and tribal fishers collectively took nearly 4 million pounds of fish from those waters last year.

The 20-year-old decree is the successor to the 1985 Consent Decree, an out-of-court settlement that allocated the fishery following a 1979 ruling that reaffirmed the tribes’ treaty rights to fish. It allocates most of the year’s whitefish take to the tribes, most salmon to the state, and splits lake trout roughly equally.

The negotiating parties had been meeting since September of last year to try to come to an agreement, but a joint motion filed on June 24 by four of the five tribes, the United States, and the state of Michigan said things hadn’t proceeded at the expected pace.

According to the motion, all the parties spent “significant time and effort” negotiating a replacement decree, forming technical work groups and even involving a mediator.

But it said, partly because of the COVID-19 pandemic’s strain on their governments, the parties won’t meet the deadline. It asked for an extension of the existing deal through December 31, 2020.

“The alternative is unacceptable: a regulatory gap during which the five Tribes, the State of Michigan, and the United States will be compelled to protect their sovereign interests ... in the form of motions for restraining orders and injunctions against each other,” said the court filing.

U.S. District Court Judge Paul Maloney granted the parties’ request on July 24, ordering that the 2020 Consent Decree will last until the end of 2020.

“We are happy,” said Bryan Newland, Chairperson of the Bay Mills Indian Community. “It gives everybody, including fishers on the water out there some predictability and certainty that for the rest of the year at least, we all know what the rules are.”

On the same day six other parties asked for an extension of the current decree, the Sault Ste. Marie Tribe of Chippewa Indians filed its own competing motion, asking for an extension only through Nov. 6 — they were ultimately unsuccessful.

The Sault Tribe said from its perspective, COVID-19 had only set the negotiations back by 90 days, and any further extension was illegal without the agreement of all tribes involved.

The tribe said it would not agree to extend the current agreement unless it was modified to remove provisions for “exclusive zones” — areas on the water where only specific tribes may fish, instead of all five of of them.

It argued that the 1979 ruling reaffirming treaty rights gave all the tribes the “collective and indivisible” right to fish anywhere in the ceded territory, and that exclusive zones were only ever agreed upon to help recently organized tribes develop their fisheries without competition.

“That preferential treatment is no longer necessary,” said the Sault Tribe’s motion, “because the more recently federally recognized tribes have had ample time and opportunity to grow their fisheries.”

The other parties filed in opposition, arguing the current agreement could absolutely be extended without consent of all the parties. They also characterized the Sault Tribe’s motion as an “attempt to prematurely tee up the issue”.

“The Sault Ste. Marie Tribe presents nuanced, fact-heavy issues that are impossible to evaluate at this stage, and the Court is not interested in issuing a decision on the merits of an issue that is still being negotiated,” he wrote.

The 2020 Consent Decree negotiations are tightly bound by a confidentiality agreement — it’s a measure to ensure the participants can be candid.

According to Bill Rastetter, a lawyer for the Grand Traverse Band of Ottawa and Chippewa Indians, it could be contended that the Sault Tribe breached the agreement by mentioning the issue of exclusive zones.

“We are not supposed to be talking about topics that are being discussed,” Rastetter said. “And yet, the Sault Tribe filed a motion.”

Newland said he’s concerned about the reaction of a powerful conservation group — the Michigan United Conservation Club — to the Sault Tribe’s motion.

“The MUCC in particular seem intent on whipping up fear and anger at tribes for simply having a treaty fishing right,” Newland said. “The MUCC’s public comments have not been in the spirit of the negotiations.”

According to its website, the MUCC represents 40,000 members and more than 200 local sporting clubs around the state. The MUCC itself is represented in the consent decree negotiations by the Coalition to Protect Michigan Resources — an organization representing a number of sport fishing, boating and conservation groups and designated amicus curiae (“friend of the court”) status in the consent decree case.

A July blog post on the MUCC website asserted that the removal of exclusive zones as requested by the Sault Tribe’s court filing could “end Great Lakes fishing as we know it”. The post made a number of assertions about the Sault Tribe’s proposed plan, including that it “appeared to seek 100 percent of the resource with no limitations on gear”.

Sault Tribe Chairman Aaron Payment issued a press release denying MUCC’s assertions, calling them harmful fear mongering, and pointing out that the removal of exclusive zones wouldn’t change state-licensed fishers’ share of the fish. He did not respond to the Record-Eagle’s request for comment.

Michigan Department of Natural Resources Director Dan Eichinger (who up until 2018 was MUCC president) was also unavailable for comment.

“The exclusive zones in the 2000 Consent Decree outline who can fish in what area [and] are unrelated to the harvest limits that govern total catch in each of the management units,” DNR spokesperson Ed Golder said in an email. “The State of Michigan cannot speak on behalf of the Sault Tribe’s intentions regarding their recent motion to do away with the exclusive zones.”

At one point, the MUCC blog expressed concern about the prospect of gill net use — a method of fishing that Anishinaabek in the area have been using for thousands of years — in more areas of the Great Lakes.

“Allowing such gear now presents risks of overfishing to the point that a stock could collapse,” it said.

Kevin Donner, a fisheries biologist employed by the Little Traverse Bay Bands of Odawa Indians, called that statement “dubious”, saying gill nets are not a special or unique source of mortality for a fish population — it’s all about how they’re used.

“The Tribes have a track record of commercial fisheries management above and beyond the requirements of the Decrees and have successfully executed sustainable fisheries throughout the Great Lakes using gillnet, trapnet, and other gears for decades,” said Donner in a message to the Record-Eagle. “When used properly, [gill nets] are selective, efficient, and provide for sustainable fisheries.”

Donner also questioned MUCC’s assertion in their blog that tribal fishing had ever historically depleted any fish stocks by 98 percent.

“We have no evidence that anything like this has occurred,” he said. “It’s certainly not reflected in the population models or the data that supports them.”

The MUCC blog post ended with a request for donations to “help save recreational fishing.”

She emphasized her concern about anti-Native sentiment among MUCC membership going into these negotiations. She said after hearing a radio story that documented historical opposition to treaty rights and ongoing harassment of tribal hunters and fishermen, she invited tribal natural resources staff to present at a MUCC membership meeting in March.

“I felt like we needed to do a little education on that,” she said, acknowledging the organization’s historical biases against tribal harvesting.

“That was then,” she said. “We’re trying to educate our membership so that they understand that it is a shared resource.”

Doug Craven, who directs the natural resources department of the Little Traverse Bay Bands of Odawa Indians, confirmed that he gave a presentation on treaty rights at an MUCC meeting.

“I think we are always gonna take the opportunity to go talk to any group around treaty rights,” he said. “The sound science that we use, the fact that there is co-management, that we have a long-term view of sustainability.”

Craven pointed out that mentions of gill nets have a long history of evoking strong reactions.

“Gill nets trigger emotions in people because of who they’re associated with, not because of what they do or how they can be fished,” he said, emphasizing that his tribe is going to manage the fishery responsibly no matter what.

Trotter defended the language in the blog post, saying her organization was simply concerned about the fisheries and were preparing for the worst case scenario.

“We have to have people understand that absent a consent decree, there isn’t a guiding force or anything protecting the fishery,” Trotter said.

Chairman Newland of Bay Mills called that assertion “simply wrong” in a statement to the Record-Eagle, saying it was offensive for the MUCC to assume that tribes don’t have the competency or the values to manage the Great Lakes.

“Tribes across the country regulate the exercise of their own treaty rights all the time,” he said. “Even worse, though, is the MUCC’s suggestion that the only thing holding back the Indians from taking all of the fish is a vigilant State — as if we don’t have a cultural or economic interest in protecting the Great Lakes fishery.”

“Historically, it has not been the Tribes who have damaged the Great Lakes or the fishery,” he added.

Donner pointed out that LTBB is investing heavily in research on issues not even contemplated by the Consent Decree, like the impacts of invasive mussels.

“Trotter and the MUCC should perhaps be relieved to learn that Tribal governments are, themselves, a guiding force for protecting the fishery,” he said.