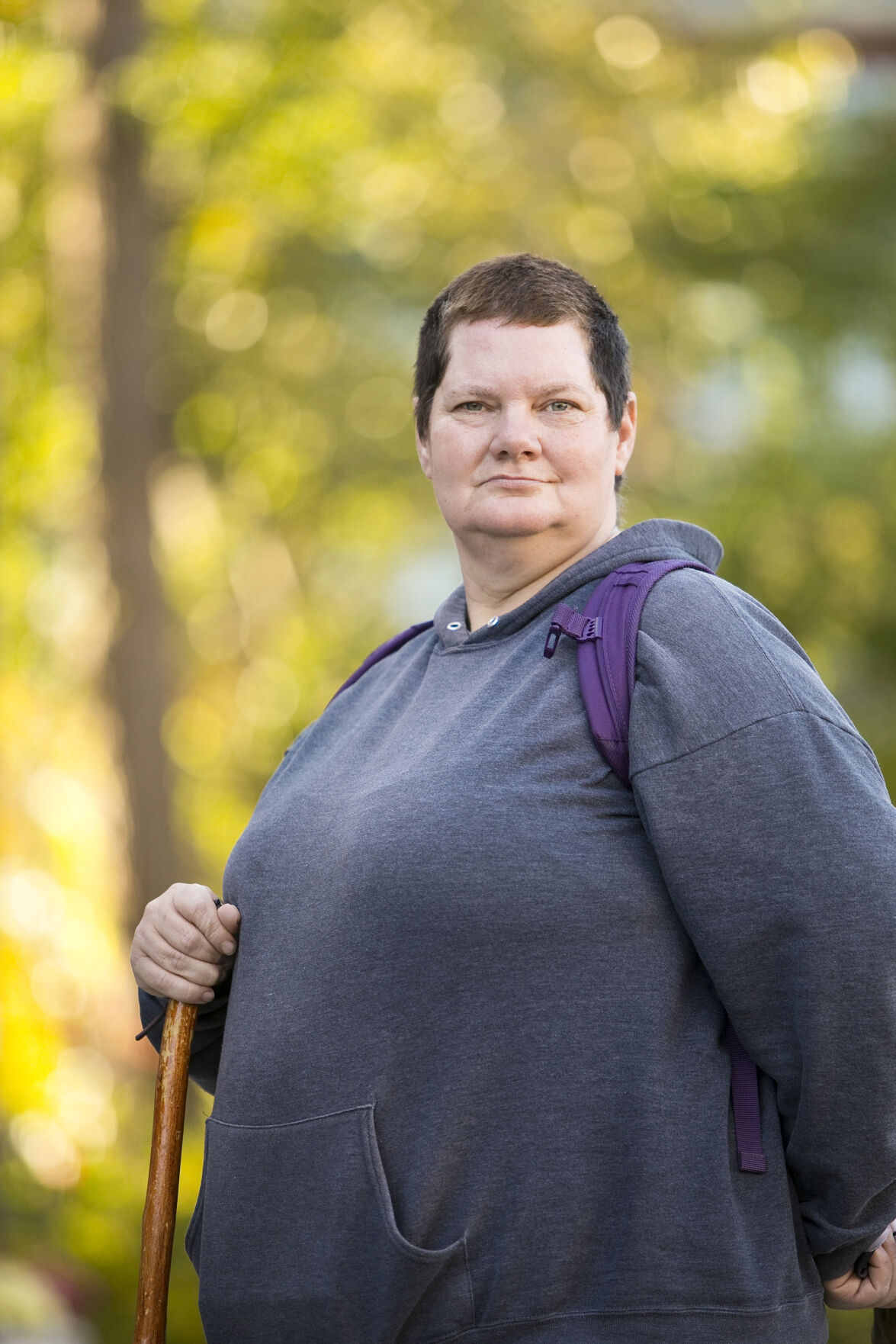 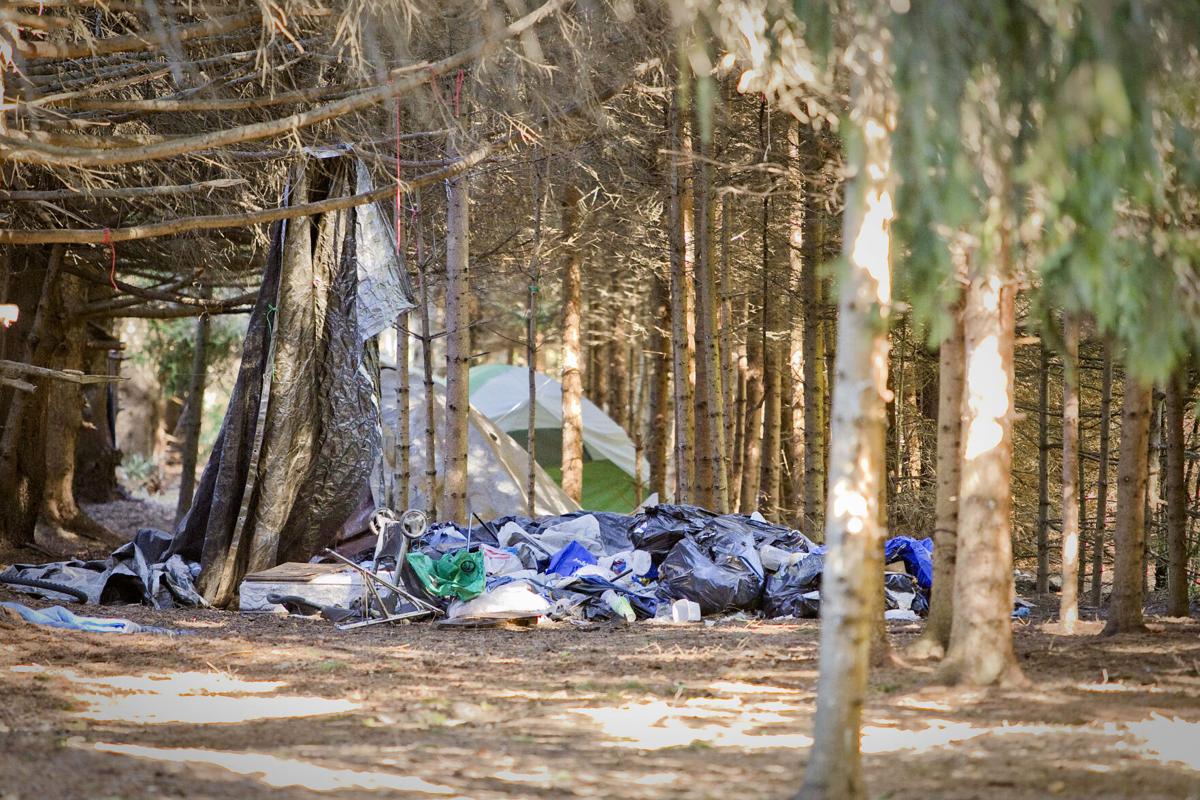 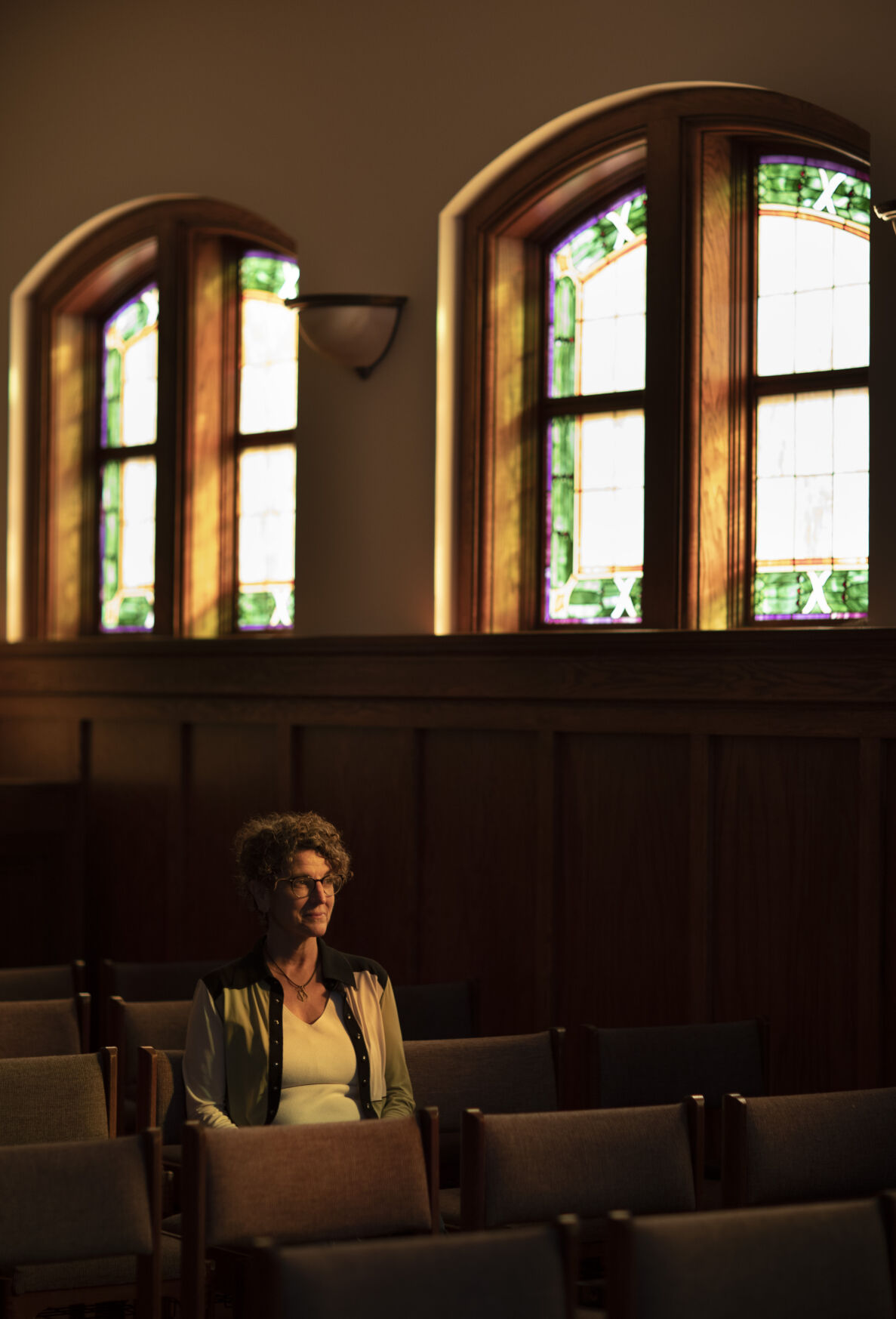 Pastor Jane Lippert poses for a portrait at Central United Methodist Church in Traverse City on Wednesday. Lippert is the outreach coordinator for the church. 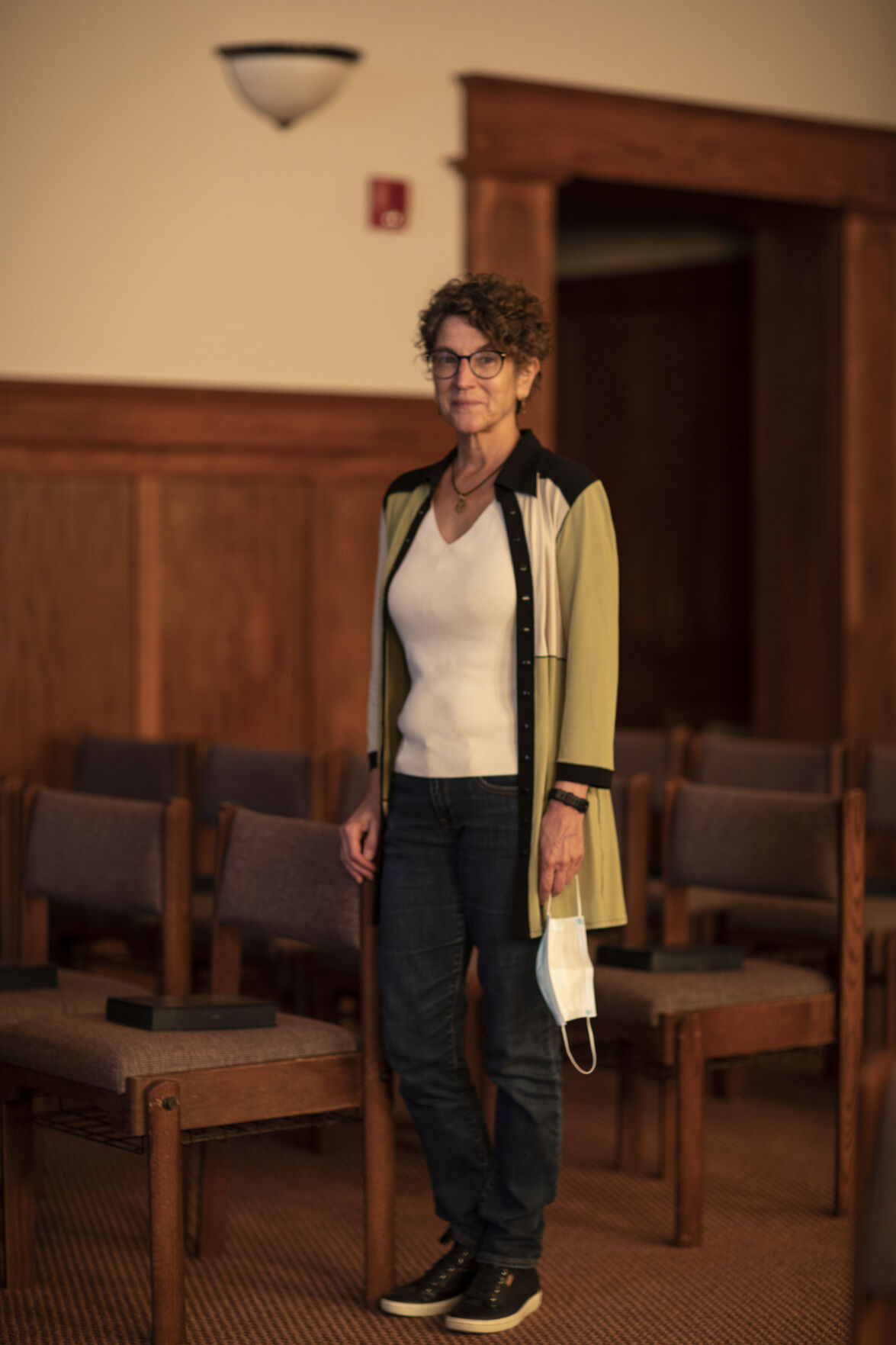 Pastor Jane Lippert poses for a portrait at Central United Methodist Church. in Traverse City on Wednesday. Lippert is the outreach coordinator for the church.

Pastor Jane Lippert poses for a portrait at Central United Methodist Church in Traverse City on Wednesday. Lippert is the outreach coordinator for the church.

Pastor Jane Lippert poses for a portrait at Central United Methodist Church. in Traverse City on Wednesday. Lippert is the outreach coordinator for the church.

TRAVERSE CITY — The breakfast at Central United Methodist Church is a growing affair.

Think school lunchroom. There’s Special K cereal, fruit and a handful of volunteers. By 9 a.m., 20-30 people file in to fill their breakfast tray. They chat about the night before and read the paper. Every so often Allan, a volunteer, announces that a shower has become available. In the back of the room an outreach worker sits down with a man to explain his Medicare plan options.

In October, a local list of homelessness referrals doubled. At the same time, homeless advocacy groups struggle to move individuals into shelter or housing — a result of a housing shortage worsened since the pandemic began.

A number of factors, mostly related to the pandemic, brought the count of identified homeless individuals up to 284. In a single month in September, advocacy groups identified 131 people, more than double the number identified the month before.

Advocates said the cause is not the recent lapse of the Centers for Disease Control and Prevention’s eviction moratorium, but rather a number of factors. These include collapsing social supports, rising mental health crises, rising domestic violence and the growing cost of living, particularly in Grand Traverse County. The result is more folks left unsheltered, living in their cars or doing their best to survive in campsites on the edges of town.

“These are people that have never been homeless before,” said Central United Methodist Church Pastor Jane Lippert.

Lippert’s title — outreach coordinator — doesn’t fully explain the role. When the unsheltered come into Central, she’s one of the first people they meet. Adjusting anyone to life without a home is no easy task. Often folks will deliberate for days before coming to her morning breakfast, Lippert said.

Newcomers are becoming more frequent, according to Lippert. She said she’s having to find ways to expand the breakfast so she can serve more people.

“I’m seeing a lot of new faces. Some come in here looking like deer in headlights,” said Lippert. “They’ve fallen through whatever ceiling or safety network they had.”

Beyond the formalities, Lippert’s role is to gauge what her clients need. Some don’t feel they’re ready for housing. Others need counseling, paperwork, and advice. Her church is also the only church in town to offer a mailbox for the homeless, which is useful for setting up disability payments, healthcare benefits or dealing with the courts.

Sometimes, it’s as simple as offering people a shower after breakfast.

The swell in visitors to her church is a trend around Grand Traverse County, one recently tracked by a number of housing advocacy groups. The Coalition Against Homelessness, led by Ashley Halladay-Schmandt, started a “By-Name Referral List” in October of last year. The list tracks the inflow and outflow of homeless individuals referred to either the Goodwill Inn, Central United Methodist Church and other local support networks.

The numbers tell a story. Each month, a certain number of unsheltered people are tallied. If there’s a bed available for them at a facility like the Goodwill Inn, they’re marked as sheltered. If there’s an affordable apartment available, they’re marked as housed. If neither is available, they remain in the “unsheltered” column — where numbers continue to grow. In September, Halladay-Schmandt was monitoring 231 unsheltered individuals in the system, up 88 from the month before. She said she’s trying to figure out whether it’s a seasonal increase, but the signs point toward a steady upward trend.

“Out of those 88, 53 of them were new people with no history of homelessness in our database,” said Halladay-Schmandt. “[These] are new entries coming in.”

Outreach workers also track the reasons people lose housing. Only three referred to Central United Methodist Church said they’d been evicted, but 38 percent reported being kicked out of a home where they had been staying with a family or friend and 17 percent reported domestic violence as their reason for leaving.

As referrals swell, the pressure to house intensifies. Outreach workers are pinched between doing their best efforts to help and an immense shortage of affordable housing. Each month, only a handful of people are matched with housing, while more wait for openings to become available.

Meanwhile, the arrival of new housing developments has not gone unnoticed. At Central United’s breakfast, Patty Motschall said she’d been following the arrival of new apartment buildings, some of which have been granted permits by the county with short-term affordable housing requirements. Once those requirements are met, landlords can convert the usage of the housing to attract market rates. Housing advocates in the county say they’ve seen this happening increasingly to seniors and the disabled: Landlords push out subsidized renters to bring in market-rate renters for twice the price.

“I don’t think it’s fair that these people get new houses,” Motschall said. Motschall mentioned condominiums like Ridge45, which arrived in 2016. “They want the money. They don’t want the housing vouchers, or Section 8 or MSHDA.”

Kristen Steele, a leasing agent at Ridge45, said that property does accept vouchers of all kinds, but that Ridge45 still requires vouchered tenants to have a gross income of three times the market rate. For example, one bedroom renting for $1,050 requires a gross monthly income of $3,150.

Vouchers, disability payments, and social security can give homeless applicants an income boost, but it rarely gets them past the minimum income requirements, Steele said.

“Honestly it’s pretty hard to make that,” Steele said. “[The vouchers] only give them so much per month.”

Shelley Perrault was homeless for years before she found an affordable unit. Before that, she lived at the Goodwill Inn. Perrault worked as a housekeeper, she worked at gas stations, and worked at the Record-Eagle’s printing factory — a night shift from 7 p.m. to 2 a.m., inserting advertising flyers into the folds of the newspapers hot off the press.

“People are going to have to have three jobs to afford that place,” Perrault said of Ridge45. She said other apartment complexes are more attainable, like Tradewinds Terrace and East Bay Flats, which rent one-bedrooms for just under $700.

With the help of a voucher, she pays for an apartment at Hillview Terrace. But for years, Perrault said her vouchers were turned down.

“Cash over vouchers,” she said. “That’s what they told us.”

It’s not clear what the spike in numbers will mean for shelters. That’s because last year, winter shelters like Safe Harbor saw record-low occupancy — in a shelter designed with 82 beds, just 39 were occupied.

“There was a lot of fear of COVID,” said Mike McDonald, Safe Harbor’s board chairman. McDonald said the shelter will prepare as it did last year, including with the option to sleep people on floors if need be.

“We’ve never turned anyone away,” he said.

Meanwhile, the Goodwill Inn continues to be in high demand. Dan Buron, the Goodwill Inn’s executive director, said his organization expects high demand for beds again this year. The shelter currently has a waiting list of 54, including several families.

This week, Lippert was upbeat. One of her former clients had just been hired by BATA, the local bus authority, even though Lippert said she still wasn’t sure what her living situation was at the moment. She knows it’s harder to keep a job without a steady place to live.

“Of course, if she had housing it would make it easier,” Lippert said. “It makes everything easier.”

Data Journalist Luca Powell’s reporting is made possible by a partnership between the Record-Eagle and Report for America, a journalism service project founded by the nonprofit Ground Truth Project. Generous community support helps fund a local share of the Record-Eagle/RFA partnership. To support RFA reporters in Traverse City, go to www.record-eagle.com/rfa.

BEULAH — More than a dozen churches are forming a coalition to help address access to affordable housing and internet in Benzie County.