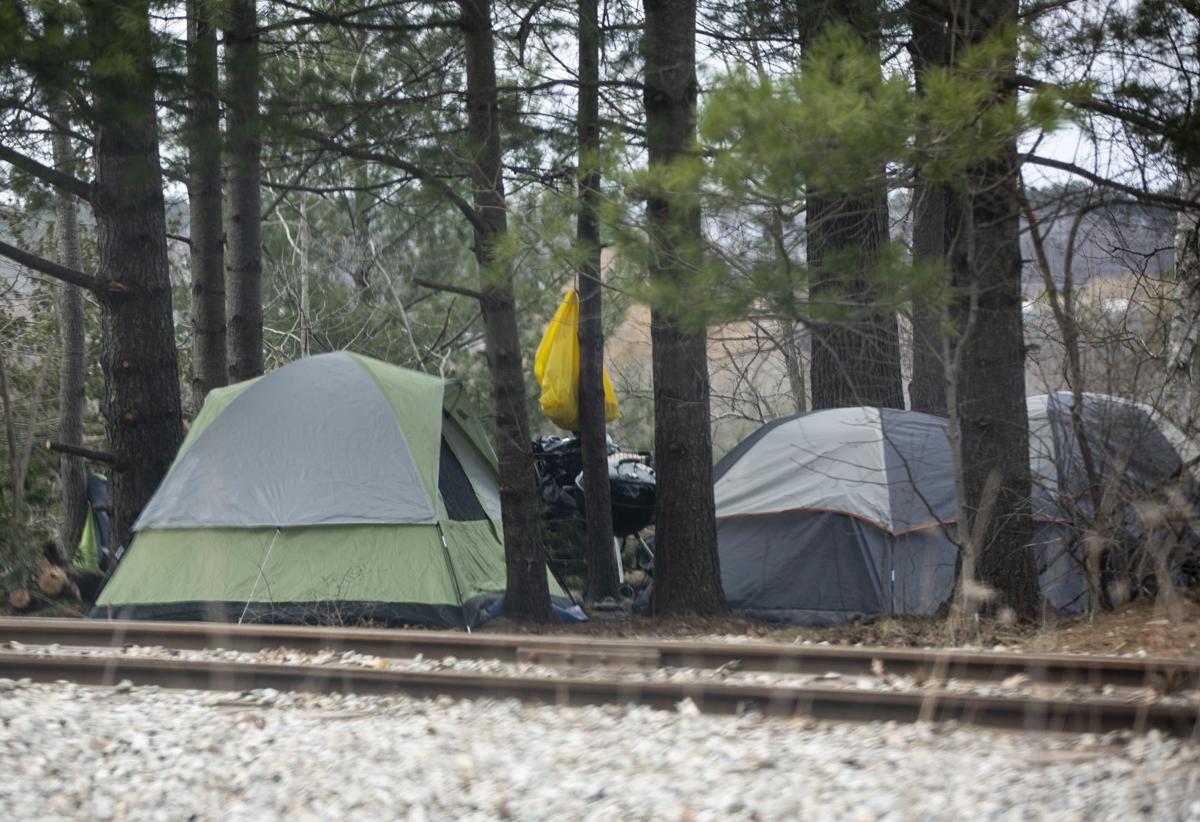 Tents sit near the train tracks on Keystone Road in Traverse City. 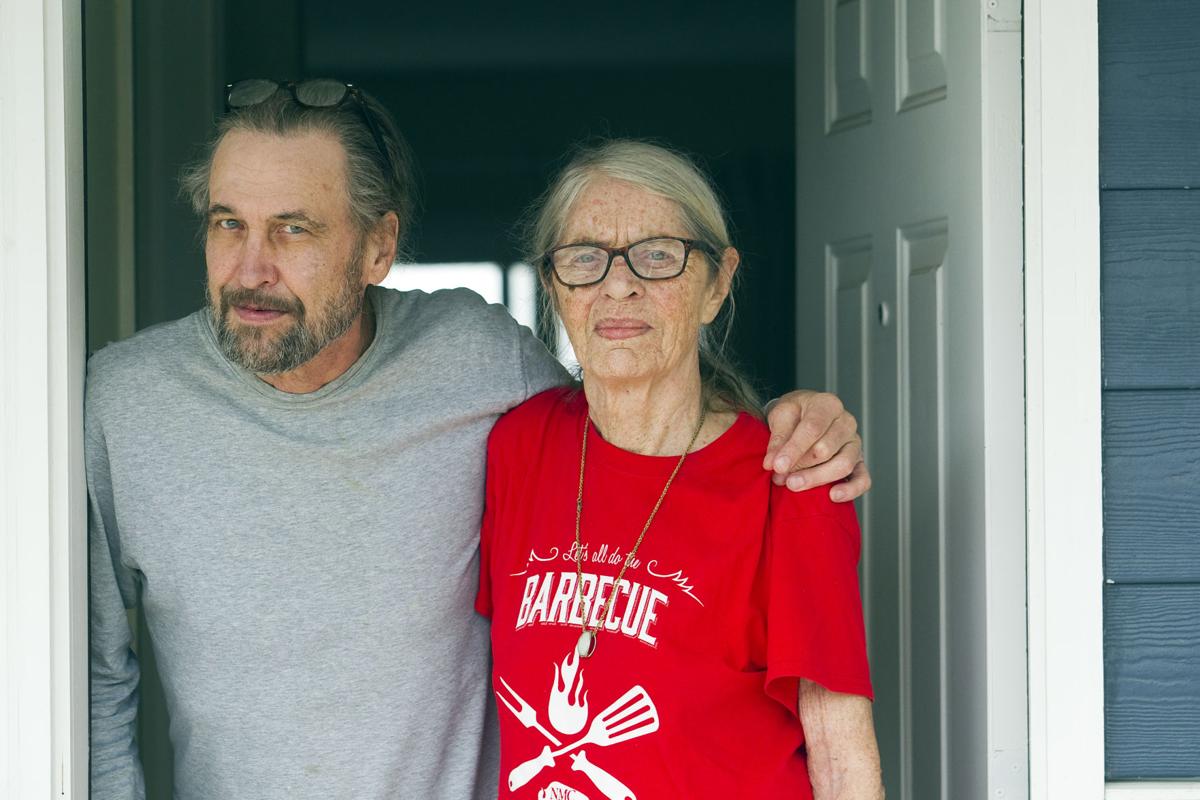 Tents sit near the train tracks on Keystone Road in Traverse City.

It didn’t have to be that way.

Cornish had a voucher for an apartment through a federal program called Rapid Re-Housing since February.

But those vouchers have a maximum allowable rent, and Cornish was waiting for a cheap enough apartment.

“That’s what makes it so bad,” Hannon said. “She was in a housing program.”

Cornish is not alone in receiving a Rapid Re-Housing voucher only to find nowhere to live, Goodwill Industries of Northern Michigan CEO Dan Buron said.

He’s glad to hear her death is stirring calls for action to help the homeless, some of whom are staying in clusters of tents near Goodwill Inn.

Safe Harbor guests got tents and sleeping bags when the shelter closed, Safe Harbor Board of Directors Mike McDonald said.

They did so on April 1, 16 days earlier than planned, because of COVID-19 concerns.

Previous attempts to mitigate risk — moving dining services outside and spreading sleepers into the dining area — weren’t enough and keeping the shelter open could’ve been more dangerous than closing it.

Cornish, 41, stayed at Safe Harbor during the winter but left a few days before the shelter closed, McDonald said. He’s not sure what else the shelter could’ve done for her.

“Any death of a homeless person hits us pretty hard,” he said.

Cornish died April 5, shortly after Traverse City police found her huddled under a blanket and unresponsive.

She was in the woods near 11th Street, as previously reported.

Those staying outside have faced a harsh spring, with snow falling several times in April and overnight temperatures frequently dipping below freezing, according to National Weather Service data.

Goodwill Inn recently gave hotel vouchers to people without shelter who have compromised immune systems or who are awaiting COVID-19 test results, Buron said — no positives as of Friday, he said. There’s about 20 vouchers in use right now, including for couples, families and individuals.

It hasn’t always been easy. Ken Coffman is a maintenance worker at Days Inn and recently self-quarantined after interacting with a voucher-holder staying at the hotel who got tested for COVID-19.

John Steiner, 62, said he’s staying at Points North Beach Resort and was staying at Goodwill Inn until pancreatitis put him in the hospital, he said. He has a voucher to stay there with Cristina Gran, 75, until May 8 but fears he and Gran could soon be out on the street are never far from his mind.

Steiner said he’s been told he can’t return to Goodwill Inn without getting tested for COVID-19, a test he can’t get, he said.

“Now I’m here with a hot tub and WIFI and a king-sized bed and I’m thankful for that, I’m thankful for what they’ve done to help us, but the uncertainty of getting a sleeping bag and a tent is always on my mind,” he said.

Steiner once had a business and Gran was a substitute teacher and volunteer receptionist until health problems and bad credit contributed to their homelessness, he said. Both use walkers and have health issues that make staying in a tent impossible.

Buron said he couldn’t speak to their circumstances specifically but said no one who has been staying at the hotel will be put out on the street.

Steiner called for a designated tent city so people staying there can get services.

Buron said he’s wary of focusing too much on attacking the symptoms of homelessness when the solution is more long-term housing.

That’s something for which Buron and other members of the Northwest Michigan Coalition to End Homelessness have sought for years. Current affordable housing stock is sparse and mostly full, Buron said.

Ashley Halladay-Schmandt, Northwest Michigan Community Action Agency’s clinical manager of homeless programs, said the coalition has a system to provide services to people facing homelessness. But every year they have stuck funds because of a lack of affordable housing, and right now there’s $58,000 for Rapid Re-Housing vouchers sitting unused.

The U.S. Department of Housing and Urban Development caps the vouchers at $788 per month for a one-bedroom apartment, Halladay-Schmandt said. That’s what the department determines as the county’s fair-market rent, and it’s typically lower than reality — many recent listings were for $1,000 a month or more, she said.

Traverse City lacks affordable housing and has for years, Halladay-Schmandt said, and the community needs to make building more a priority. Those projects would do even more if they had set-aside units for people without homes, like East Bay Flats’ rooms for young adults dealing with homelessness.

“So we can do as much planning and services and sheltering and giving people experiencing homelessness food and shelter, all of that, all their basic needs,” she said. “But if we don’t have housing as their primary need, then it’s all never going to end, and we’ll have more people like Danielle pass away every single year because we don’t have housing.”

Cities can adopt payment-in-lieu-of-taxes deals, where they accept less than a property’s tax bill to cover costs to city services, as previously reported. Affordable housing developers frequently seek these out, including Woda Cooper Companies, for two affordable apartment projects near Eighth Street.

The city could also give incentives to landlords who accept Rapid Re-Housing vouchers, or put up a pool of money the coalition could use to reserve cheap apartments once they become available, Halladay-Schmandt said.

Traverse City Commissioner Christie Minervini said she liked both ideas, but Mayor Jim Carruthers said the city has only so much money and is likely to have even less as pandemic-related closings batter the economy and tax revenues.

Cornish’s death shook her friends and family, who remembered her as a smart, fun-loving woman who was a cheerleader in high school and had a passion for horses.

It also prompted calls to do more to help people sleeping outside after Safe Harbor closed, along with harsh criticism for Traverse City leaders.

It snowed the night of April 20, the same day several mostly anonymous commenters lambasted Traverse City commissioners for what they contended was indifference toward people without homes after Safe Harbor closed. Some callers demanded that hotels, short-term rentals and cottages to be opened for people without shelter.

Carruthers later rejected this, pointing to the city’s help in finding a site for Safe Harbor’s new shelter. He also questioned how far some of the callers have gone to help people with homelessness, including those who said they knew Cornish.

Minervini, who was Safe Harbor’s fundraising chair, said she accepts blame as an individual and a person in power. She also agreed the city commission could do more.

But the blame for Cornish’s death goes much further, Minervini said.

Buron echoed this, saying the question gets to how far everyone is willing to go to help the most vulnerable.

“If we really look at it in the bigger picture, we’re all responsible for that, all of us have the opportunity to do things differently and to advocate for different policies and to put more resources into it,” he said.

Editor's note: This article has been updated to correct a reporter's error about Christie Minervini's status as Safe Harbor fundraising chair. May 3, 2020